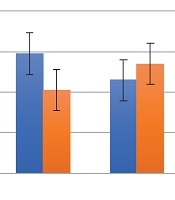 Genital tract infection is one of the main causes of male infertility. The increasing frequency of drug resistance and side effects of antibiotics have urged researchers to seek alternative sources of antimicrobial agents, such as medicinal herbs, for the treatment of antibiotic-resistant infections.

The present study aimed to determine the frequency of potentially pathogenic microorganisms in the semen of infertile men and investigate the antimicrobial activity of Silybum marianum extract against the isolates.

Semen samples were collected from 96 infertile men who referred to the Pasteur Laboratory in Gorgan, Iran. Semen samples were first analyzed according to the World Health Organization guidelines and then underwent microbiological tests to identify pathogens. Antimicrobial susceptibility to S. marianum extract was evaluated using the disk diffusion (Kirby-Bauer) method. Moreover, the active components of the extract were identified by the gas chromatography-mass spectrometry technique.

In the semen analysis, 64% of the samples had problems in the parameters of sperm count, motility, and morphology. In addition, the bacterial contamination was observed in 36% of semen samples. The most and the least common isolates were Staphylococcus aureus (45%) and Klebsiella pneumoniae (11%) and Staphylococcus epidermidis (11%), respectively. In Gram-positive isolates, S. aureus was mostly resistant to azithromycin (57%). In Gram-negative isolates, Escherichia coli was mostly resistant to gentamicin (37%). The inhibitory activity of S. marianum flower extract was significantly higher than that of S. marianum leaf extract (P < 0.01). Silybin (2.64%) and silychristin (3.07%) were the most abundant constituents of S. marianum flower extract.

Bacterial infections play an important role in male infertility and S. marianum extract after purification can be potentially used for the treatment of antibiotic-resistant genital tract infections.

Infertility can increase sexual dysfunction and reduce sexual satisfaction and the frequency of sexual activity. For many people, infertility is a major crisis and source of psychological stress that can cause emotional stress and a range of negative psychological reactions, including depression, anxiety, worry, anger, shame, jealousy, loneliness, despair, low self-esteem, and imbalance. Emotionally, it can lead to feelings of inadequacy and sexual dysfunction. Infertility is a complex life crisis that is psychologically threatening and emotionally stressful. Due to the impact of infertility on human life, it has become an important part of medicine and research in the medical community (1).

It has been reported that one in every four couples is affected by infertility. About 40% of these cases are related to “male factor” infertility. One of the most important causes of male infertility is the genital tract infection, which can directly affect the sperm count, motility, and morphological normality (2). These infections can also damage the testicles and stimulate inflammatory and autoimmune reactions, all of which can lead to male infertility. A wide range of microorganisms is involved in the development of male infertility (3). Enterococci and E. coli are often found in the semen and usually lower sperm parameters compared to normal. Staphylococci are bacteria often found in the urethra of men and can contaminate the semen (4). Generally, bacterial infections and subsequent sperm agglutination can result in reduced sperm motility, epididymitis, prostatitis, and impaired spermatogenesis. Despite the favorable effects of antibiotic therapy on sperm parameters, the increasing rate of antibiotic resistance has made the treatment of such infections extremely difficult (5, 6).

Nowadays, the use of medicinal herbs and traditional medicine is recognized as an important aspect of global health promotion. Medicinal plants comprise a variety of biocompatible and nontoxic compounds that can exert therapeutic effects without unwanted side effects (7). Silybum marianum is a commonly used medicinal plant from the family Compositae that grows wild in various parts of the world, including the northern, western, and southern areas of Iran. Silymarin is the active compound of S. marianum seeds that contain flavonolignans, including silybin, isosilybin, silychristin, and silydianin. These compounds possess antioxidant, anti-inflammatory, anti-arthritic, and antimicrobial properties (8).

This study aimed to investigate the in vitro effects of S. marianum extract on microbial agents isolated from the semen of infertile men.

In this study, 96 semen samples were collected from men aged 20 - 35 years who were referred to the Pasteur Laboratory in Gorgan, Iran, between February 2018 to May 2019. The study procedures were approved by the Ethics Committee of Islamic Azad University, AliAbad branch (code No. 1398.008), Golestan, Iran, and were performed according to medical ethics standards. The semen analysis and culture were performed to identify possible genital bacterial pathogens in men with no sex in the past 3 - 5 days. The study also included a control group consisting of 50 semen samples taken from men with proven fertility and no history of infection. The samples were incubated for 30 minutes at 37ºC before Papanicolaou staining. The semen volume, time of fluidization, pH, concentration, morphology, motility, and white blood cell count were determined according to the World Health Organization guidelines (9).

The plant was collected from Ziarat village in Gorgan, northern Iran, and confirmed in the herbarium of the Islamic Azad University of Gorgan. Then, the leaves and flowers of the plant were separated, dried, and powdered completely. The ethanolic extract of the plant was obtained by maceration. For this purpose, the obtained powder was mixed with a 1:10 volume of 70% ethanol in an aluminum-coated Erlenmeyer flask at room temperature. The mixture was placed on a shaker at 130ºC for 48 hours and then passed through a Whatman No. 4 filter paper (USA). The solvent was separated from the obtained extract using a vacuum rotary evaporator at 60ºC. Next, the extract was evaporated to be dried under vacuum at 45ºC and 25 mmHg. Finally, the extract was passed through 0.45-micron filters and stored in a sterile dark glass container in a refrigerator.

First, the extract was incubated at -20ºC for 48 hours to remove wax and fat. After filtration, the mixture was mixed with an equal volume of dichloromethane for 2 hours at 286 rpm. The obtained uniformed mixture was left for 15 minutes until separation into two phases. Finally, the dichloromethane phase was injected into a Gas Chromatography-Mass Spectrometry (GC-MS) instrument (Agilent, USA) to identify compounds.

To prepare the initial concentrations of flower (F1) and leaf (L1), the dried leaf and flower extract was inoculated with 1% dimethyl sulfoxide and distilled water to obtain a final concentration of 500 mg/mL. The resulting mixtures were then diluted to 250 mg/mL and labeled as F2 and L2. A bacterial suspension with a density equal to 0.5 McFarland standard was cultured on Mueller-Hinton agar (Merck, Germany). Five wells with a diameter of 5 mm were created on the agar plate and were inoculated with 50 µL of the initial and diluted concentrations of the leaf and flower extracts (B1, B2, G1, G2). The plates were incubated at 37ºC for 24 hours, and the diameters of growth inhibition zones were measured. A well containing only distilled water was considered as the negative control. An inhibition zone diameter of < 12 mm and < 10 mm indicated sensitivity and resistance, respectively. Data were analyzed by SPSS-16 using the Kruskal-Wallis nonparametric test. In addition, the Microsoft Excel (2010) software was used to calculate the difference of means and to draw tables and charts. A p-value of less than 0.01 was considered statistically significant.

Of 96 semen samples collected from infertile men, 35 samples (36%) were culture-positive. Of these samples, 16 (45%) were positive for Staphylococcus aureus, 11 (33%) for Escherichia coli, four (11%) for Klebsiella, and four (11%) for Staphylococcus epidermidis. No fungi were isolated from the samples. Most positive cultures (38.8%) were related to men aged 27 - 30 years, while the frequency of positive cultures was lowest among samples collected from those aged 20 - 25 years.

The frequency of sperm count, motility, and morphology problems was 41%, 54%, and 76% among culture-positive semen samples, respectively. In addition, 64% of the samples had problems in all three parameters. The WBC count was between 6 and 18 in culture-positive samples, which was higher than the normal range (0 - 1). Moreover, the pH of 42% of the samples was higher than the normal range (7.1 - 8.0) (Figure 1). 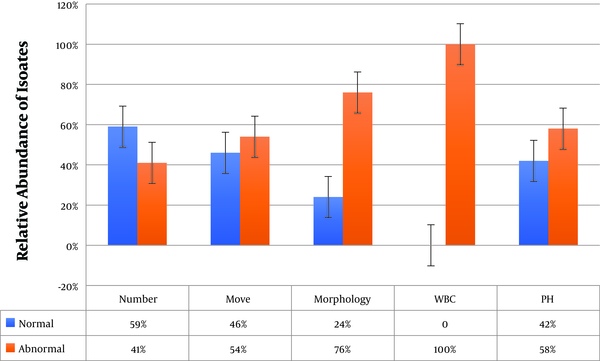 Comparison of growth inhibition zones generated by S. marianum flower and leaf extracts against Gram-positive (A) and Gram-negative (B) isolates. 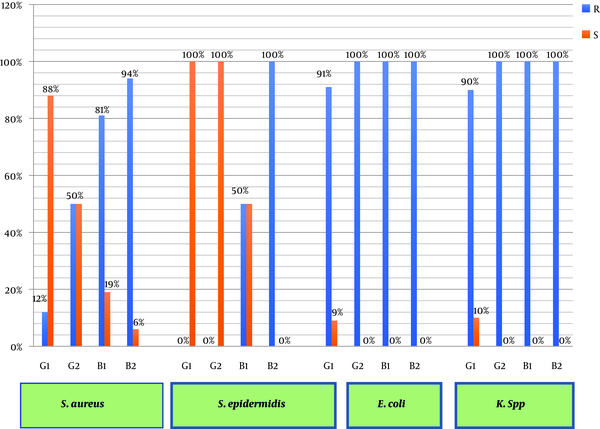 Relative frequency of the antibacterial effect of S. marianum flower and leaf extracts on bacterial isolates from the semen of infertile men

Given its stronger antibacterial activity, we performed the GC-MS analysis on the S. marianum flower extract. Based on the results, the extract contained various compounds, including silybin (2.64%) and silychristin (3.07%). The peaks related to silybin and silychristin appeared at the retention times of 35,747 and 36,447, respectively. These compounds were identified with a probability of > 99%.

Infertility is a fairly common problem worldwide. The main causes of male infertility include genital injuries, semen contamination, epididymitis, and ejaculatory duct obstruction. Male infertility is initially investigated by the semen analysis. Abnormal spermiogram findings simply raise the possibility of reduced fertility. In addition, sperm motility is the most important determinant factor of infertility (11). In our study, 64% of the semen samples from infertile men had problems in parameters including sperm count, motility, morphology, and pH, which is almost identical to the rates in previous studies in Iran (11, 12). Nevertheless, some researchers believe that infertility is possible even in asymptomatic men, often due to infections that decrease semen quality by affecting sperm motility and morphology (13, 14).

A wide range of bacteria can play a role in male infertility (15). In the present study, 36% of samples from infertile men were positive for bacterial infection, which is similar to the rate reported in two previous studies in Iran (16, 17) and a study in Tunisia (18). However, it should be noted that the abundance of bacterial infections varies depending on the causative bacterium. For instance, in a study in 2018, the frequency of S. aureus infection was 16% among semen samples of infertile men (19), which is notably lower than the rate observed in our study (45%). In another study in 2018 (20), the frequency of S. aureus isolates in semen samples of infertile men was reported to be 65%, which is higher than the rate found in our study. In the mentioned study, the frequency of S. epidermidis (24.5%) and Klebsiella (4.8%) isolates was also higher than the frequency found in our study (11%). Studies in Nigeria (21) and Iraq (22) also reported the frequency of staphylococcal infection to be 68% and 65%, respectively. These inconsistencies could be related to differences in age, physiology, anatomy, and diet of study subjects.

Although antibiotic therapy is the most commonly used method of controlling genital infections, the increasing rate of drug resistance has reduced the effectiveness of treatment (23, 24). Therefore, researchers have investigated alternative therapies, the use of medicinal plants, or natural antimicrobial agents for the treatment of such infections.

We demonstrated the inhibitory activity of S. marianum extract against bacteria isolated from the semen of infertile men, especially Gram-positive bacteria. This finding is consistent with the results of some studies in Iran (25, 26) and South Korea (27). However, our findings were inconsistent with the findings of a study by de Oliveira et al. (28), which can be due to the difference in the bacterial species, subjects, time of plant harvest, and the active components of the plant. Silybin and silychristin were among the most abundant active components of S. marianum extract. Previous studies revealed the antibacterial (27) and DNA-dependent RNA polymerase I stimulating activities (29) of these compounds.

The results of our study showed that bacterial semen infection could play a significant role in male infertility. The S. marianum flower extract has good antibacterial properties, particularly against Gram-positive bacteria such as S. aureus and S. epidermidis. Therefore, this extract after purification can be potentially used as a suitable alternative for the treatment of antibiotic-resistant infections of the male reproductive tract.

The authors are grateful to all those who assisted us in this study. We also thank the staff of the Pasteur Laboratory in Gorgan, and the Central Research Laboratory of Mazandaran University of Medical Sciences, Iran.

Copyright © 2020, International Journal of Infection. This is an open-access article distributed under the terms of the Creative Commons Attribution-NonCommercial 4.0 International License (http://creativecommons.org/licenses/by-nc/4.0/) which permits copy and redistribute the material just in noncommercial usages, provided the original work is properly cited.
download pdf 2.71 MB Peer Review Comments ( 98.22 KB) Get Permission (article level) Import into EndNote Import into BibTex
Number of Comments: 0