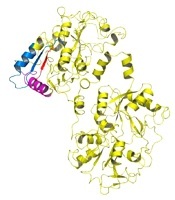 The resistance of microorganisms to conventional antibiotics has prompted researchers to produce new antimicrobial compounds. Antimicrobial peptides can be alternatives to chemical antibiotics. Antimicrobial peptides are produced approximately by all living organisms to fight infection. Lactoferrin is an iron glycoprotein that plays an important role in the immune system. Lactoferricin and lactoferrampine have stronger antimicrobial activities than lactoferrin. In this study, we investigated the inhibitory effects of a combination of chimeric bovine lactoferricin and lactoferrampine on microorganisms including Escherichia coli, Staphylococcus aureus, Salmonella typhimurium, Enterococcus faecalis, and Listeria monocytogenes, as well as plant pathogens including Pseudomonas syringae pv. syringae, Pseudomonas viridiflava, Xanthomonas translucens, Xanthomonas perforans, Erwinia amylovora, Pectobacterium carotovorum, and Agrobacterium tumefaciens. The results showed that chimeric bovine lactoferrin had a good inhibitory effect against pathogenic microorganisms and plant pathogens. The minimum inhibitory concentration (MIC) and the minimum bactericidal concentration (MBC) for pathogenic microorganisms Salmonella typhimurium and Listeria monocytogenes were 7.562 µg/mL and 15.125 µg/mL, respectively, which showed the highest sensitivity to chimeric bovine lactoferrin. The MIC and MBC for plant pathogens were 0.497 µg/mL and 0.997 µg/mL, respectively, which were related to Pseudomonas syringae pv. syringae and it showed the highest sensitivity to chimeric bovine lactoferrin.

Foodborne disease is known as one of the global public health problems that can affect human health, livelihoods, and the health system. An estimated 600 million people, approximately 1 in 10 worldwide, get annually infected by eating contaminated food, with diarrhea being the most common exacerbation of the disease (1).

One of the important factors in antimicrobial capacity of cow milk is lactoferrin (LF), which has extensive antimicrobial activity against both Gram-negative and Gram-positive bacteria (2).

The hydrophobic, cationic, and helical structures of these peptides are among important properties determining their antimicrobial activity against a wide range of microbes (3, 4).

In the last 25 years, the use of antimicrobial peptides for the treatment of various diseases of microbial origin has increased due to the low probability of bacterial resistance to antimicrobial peptides compared to what occurs against commercial antibiotics (5). Antimicrobial peptides are safe compounds for human health and are of interest to the food industry. Milk proteins such as beta-lactoglobulin, alpha-lactalbumin, and lactoferrin have the potential to be used as food drugs (6). Recent research has shown that lactoferrin and related peptides are over-efficient and have good antibacterial and antiviral properties (7). Bolscher et al. first synthesized lactoferrampine and lactoferricin peptides, commercially known as lactoferrin chimera, and reported that they were much stronger in antibacterial activity than natural lactoferrin chimeric (8).

The lactoferrin protein is one of the glycoproteins in milk with a molecular weight of 80 KDa, which has a positive charge and PI = 8 - 8.5. Lactoferrin is primarily present in milk but is also found in other biological fluids of the body, such as saliva, synovial fluid, tears, bile, and pancreatic juice, as well as to a large extent in specific neutrophil granules (3, 9, 10). This protein belongs to the family of transferrin proteins that, together with other transferrins, carry iron to the blood serum (11, 12). The cationic nature of lactoferrin plays an important role in the ability to bind to cells and many anionic molecules (11, 13).

Lactoferrin has many biological functions and affects Gram-negative and Gram-positive bacteria. There is no report of bacterial resistance to lactoferrin (14). Side effects of consuming antimicrobial peptides are less than those of commercial antibiotics (11). Among these peptides are lactoferrampine and lactoferricin peptides that are located in the second lobe of N lactoferrin I (Figure 1) (15). The hydrophobic, cationic, and helical properties of these peptides are important determinants of their antimicrobial activity (3, 4). Lactoframampin contains amino acids N1 domains 268 - 284 and has shown antimicrobial activity against many Gram-positive and Gram-negative bacteria including Bacillus subtilis, Escherichia coli, Pseudomonas aeruginosa, and Staphylococcus aureus (16). 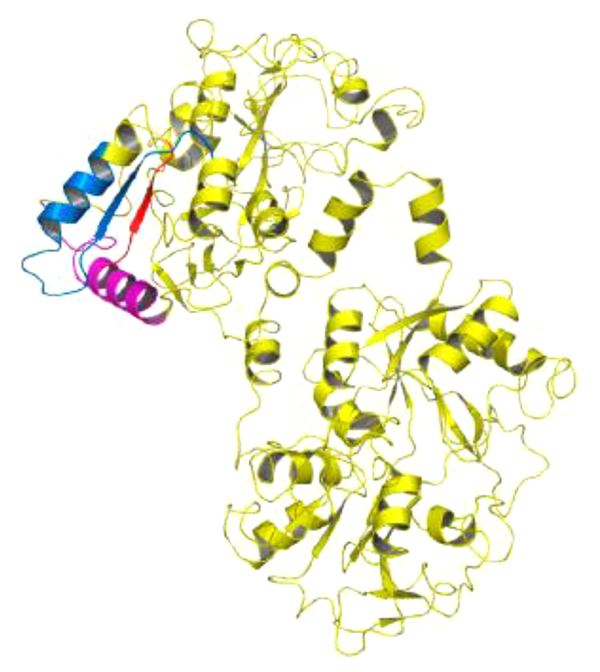 The overall structure of lactoferrin showing positions of the functional peptides Lf (1–11) (red), lactoferrampin (pink), and lactoferricin (blue) in the N-terminal lobe

The C-terminal of lactoferrampine is known as a region with a positive charge that is crucial for its antimicrobial activity. The N-terminal region of amino acids 270 - 284 is also essential for the helical structure of the peptide (Figure 1) (15, 16).

In 2009, bovine LFA-LFC peptides, which are linked together by lysine amino acids, were recombinant for the first time, and their antibacterial activity was measured against some bacteria. The results showed that the LFA-LFC chimera produced higher activity than lactoferrampine or lactoferricin. In this study, lactoferrampine and lactoferricin peptides were mixed in a 1:1 ratio, and their antibacterial activities were measured. The results showed that the LFA-LFC chimera had desired performance (8, 17)

The current study aimed to investigate the inhibitory effect of chimeric bovine lactoferrin on major foodborne microorganisms and plant pathogens.

Bovine lactoferricin sequences (accession No. NC_037349) were synthesized first by gene structure design and codon optimization according to the expression system and cloned into the pBI121 expression vector. Agrobacterium strain LBA 4404 was used for peptide expression. Leaf disk and Agrobacterium co-culture methods were used for transformation to tobacco. After the expression of the peptide, its purification and observation were done on the SDS gel, besides concentration determination and extensive evaluation of peptide function for various types of foodborne bacterial pathogens. Since no previous work was done on the synthesis of chimeric bovine lactoferrin in plants, the whole process was done with greater sensitivity. Therefore, by reviewing the references, it was identified how lactoferrin and lactoferrampine are binded and its potential properties were investigated online.

Then, according to the preferred codon after determining the chimeric sequence, the optimal codon for optimal expression in tobacco was added along with the addition of auxiliary sequences to the desired plant synthesis.

Minimum inhibitory concentration (MIC) experiments were performed on a sterile 96-well microplate using microdilution broth (18). For this purpose, the 24-h culture of bacteria was prepared. After preparation of 0.5 McFarland bacterial suspension in Müller Hinton broth (Merck, Germany), 100 μL of the suspension was added to each well of the plate. It was then added to the first well of the first 100 μL of chimeric protein and diluted to well 11 after pipetting several times and then diluted to well 11 (concentration of each well in each row relative to the upper half was reduced). Well 11 of each row was used as the control (negative control), only containing medium, DMSO, and the compound while bacteria were not cultured to avoid possible contamination. Well 12 of each row was used as a bacterial control (positive control) to ensure proper culture conditions and normal bacterial growth. We used DMSO and bacteria to determine bacterial turbidity. After bacterial inoculation, the microplate was placed in a rotary apparatus and incubated for 16 to 18 h at 38°C. After incubation, turbidity or no-turbidity in each well was visualized and optical absorption was read by the ELISA plate reader (STAT FAX 2100) at 630 nm. The lowest concentration with no opacity was used to determine the MIC.

To measure the minimum bactericidal concentration (MBC), 10 μL was inoculated from wells without turbidity in sterile conditions and cultured on Nutrient Agar (NA). After 24-h incubation at 37°C, the lowest concentration capable of killing 99.9% of the bacteria was regarded as MBC. All experiments were repeated three times and the results were presented as averages.

In the current study, for having a more efficient antimicrobial function and increasing the usefulness of two important antimicrobial peptides of milk, both peptides were produced in recombinant chimeric forms, which resulted in highly efficient function of peptides in inhibiting bacterial pathogens.

Foodborne microbial pathogens evaluated in this study were prepared from the National Center for Genetic and Biological Reserves of Iran. The estimated concentration of this peptide in the extract after nickel column purification was 968 μg/mL based on the Bradford method (Table 1).

The MBCs were greater than the MICs for all pathogens, except for Escherichia coli (Table 2).

In the case of the plant pathogenic complex, it is worth noting that different types of pathogens were studied, with a wide variety of hosts, including pathogens from a variety of crops and horticultural products. The purpose of this peptide was to be a compound alternative to plant toxin. The peptide concentration used in this assay was 1,018 µg/mL, which is the serial of the different concentration of the MIC (Table 3).

Antimicrobial peptides (AMPs) can inhibit and kill a wide range of bacterial, viral, and fungal pathogens (19). They are less cytotoxic to mammalian cells and lower the risk of catching pathogens because they improve host's immune system in a special way. Therefore, they can be considered a suitable alternative to chemical pesticides for plant protection (20).

The results of this study indicated the excellent inhibition of plant bacterial pathogens, which is somehow confirming previous research (21, 22). In the present study, to have a more efficient antimicrobial function and benefit from two important antimicrobial peptides of milk, we produced the peptides in a recombinant chimeric form, which resulted in very good function in inhibiting bacterial pathogens. Other research is similar to our results (23). Compared to any of the peptides (lactoferrin and lactoferrampine), lactoferrin-lactoferrampine chimera required a lower concentration and incubation time and had higher insensitivity to ionic strength and stronger binding to negative cell membranes, with much stronger antimicrobial properties. The antimicrobial peptides lactoferricin and lactoferrampine are promising candidates due to some unique features such as extensive antimicrobial activity, selective activity, and thus lack of toxicity to eukaryotic (human) cells, thermal stability, and the probability of induction of resistance in the disease population. They are antimicrobial compounds for the fight against plant pathogenic bacteria (24, 25). Expression of AMPs in plants, in addition to resistance to plant factors, can lead to resistance to other stresses such as insect pathogens (26) and even in some cases to indiscriminate stresses such as oxidative and salt stresses (27).

Foodborne illness is one of the most common public health problems in the contemporary world. Food Borne Diseases FBDs are caused by the consumption of contaminated water and food due to environmental factors, mainly microorganisms or their toxins, resulting in disruptions in human health and serious economic consequences. It is becoming increasingly important, and governments around the world place great importance on measures to ensure healthy food production in response to the increasing number of FBDs (1). In the present study, after synthesizing the recombinant chimeric peptides from cow milk in tobacco and purification and concentration determination, the ability of this cow-inspired compound was demonstrated to inhibit microbial contamination indicators (28). For this reason, there is a strong tendency for the peptide to be used in the food industry. On the other hand, the prevailing view on the use of chemical additives as harmful compounds in the food industry due to their poisoning , the natural preservaties and AMPs are of particular interest and use in food and AMPs are of particular interest and use in food (28). The results of MIC and MBC tests of chimeric bovine lactoferrin on five pathogenic bacteria are presented in Table 5 (29, 30). In addition, the table provides the effect of five standard antibiotics on these pathogenic bacteria.

Table 5. The Average Values of MIC and MBC for Chimeric Bovine Lactoferrin in Comparison with Commercial Antibiotics Against Five Pathogenic Bacteria (CLSI)

Overall, considering the appropriate expression and functional confirmation of the lactoferrampine-lactoferricin chimeric peptide was purified with His-tag to inhibit microbial contamination indicators, this compound can be a suitable alternative to chemical food preservatives. However, realizing such an idea requires much additional research.

Copyright © 2020, International Journal of Infection. This is an open-access article distributed under the terms of the Creative Commons Attribution-NonCommercial 4.0 International License (http://creativecommons.org/licenses/by-nc/4.0/) which permits copy and redistribute the material just in noncommercial usages, provided the original work is properly cited.
download pdf 874.77 KB Peer Review Comments ( 96.58 KB) Get Permission (article level) Import into EndNote Import into BibTex
Number of Comments: 0