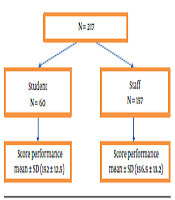 Considering the fundamental role of nursing staff and students in patient care and nosocomial infection control.

This study aimed to evaluate and compare the performance of students and nursing staff in nosocomial infection control in Behbahan city in 2019.

This is a descriptive-analytical study. The participants were 217 nursing staff and students of three hospitals in Behbahan who were selected by random sampling. The data gathering tool was a questionnaire that consisted of demographic information and five common nursing procedures. The performance measurement criterion was based on fulfilling or not fulfilling standards. After gathering the data, they were analyzed by statistical tests, including ANOVA and Pearson correlation in SPSS 16 software.

Based on these findings, it can be concluded that nurses at different levels of education, with different demographic characteristics, and different work environments have a good performance in controlling infections. This is a strong point in the nursing profession.

Regarding the harmful effects of nosocomial infections on the individual and society, it is necessary to make decisions to control infections. One of the appropriate solutions in infection control is to improve the performance of personnel (8). Researchers believe that given the caring role of nurses and nursing students and their frequent exposure to clients and families that require their caring role, more opportunities are provided for the propagation of organisms, so nurses and nursing students play a key role in the cycle of infection control (9-11). Hence, the awareness of the personnel's performance and providing necessary training, which is part of the main infection control strategies at the national and international levels, will enable staff to provide accurate and adequate scientific information on the types of nosocomial infections and procedures (10, 12). Nurses can protect patients from nosocomial infections by using this information on corrective and preventive care interventions (10, 12).

In this study, we compared the performance of students and clinical ward staff in the control of nosocomial infections.

This cross-sectional analytical study aimed to compare the performance of students and staff of clinical wards in nosocomial infection control in Behbahan city in 2019. The research population included nurses and field training students of nursing in Shahidzadeh, Farideh Behbahani, and Shahid Mustafa Khomeini public hospitals. The population size was 500 people; thus, according to the Morgan table, the sample size was 217, which was selected using stratified random sampling. Participants were provided with the necessary information about the study and signed consent forms consciously. Staff was required to have a practical nursing diploma, bachelor of nursing and midwifery, and at least one-year work experience, and students were required to pass at least six semesters as the inclusion criteria.

The data collection tool was a researcher-made questionnaire designed by Yousefi et al. Part one included demographic characteristics such as age, gender, place of work, hospital ward, work experience, field, education level, and passing related workshops. Part two included the performance questionnaire in five representative daily nursing procedures, including 1) Before doing anything, 2) Bandaging, 3) Peripheral venous catheter insertion, 4) Intravenous injections, and 5) Suctioning. A Likert-scale scoring system was used that included always (3), sometimes (2), and never (1). Performance measurement criteria were divided into three levels based on whether each of the standards is met or not, and after summing the scores, the performance scores were categorized as poor (1-58), moderate (59-116), and good (117-174). The split-half method was used to determine the content validity and reliability of the performance section. The Pearson correlation coefficient was calculated as 0.84.

In this study, the performance of 157 nursing staff (11% males and 89% females) and 60 students (30% males and 70% females) regarding nosocomial infection control was assessed using a questionnaire. In terms of education, 12% of the staff were nurse aides, and 88% were bachelor of nursing graduates.

Table 1. Comparing the Performance of Nursing Staff and Students in Nosocomial Infection Control 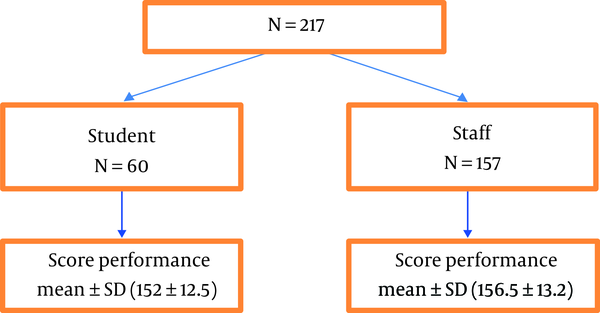 Diagram of Comparing Students and Staff by Performance Score

Table 2. Performance of Nursing Staff and Students in Nosocomial Infection Control in Terms of Age, Sex, and Passing Training Workshops

In line with the main objective of the study, comparing the performance of students and clinical ward staff in nosocomial infection control, the results showed that the mean performance scores of students and nursing staff were good among the three levels of poor, moderate, and good. There was no statistically significant difference between the two groups (nursing staff and students) (P = 0.08). This is consistent with the results of most studies, including studies by Fashafsheh et al. (18), Darawad et al. (19), Ghalya (20), Sharif et al. (21), Alexandria et al. (22), and AL Rawajfah et al. (23), but is not consistent with studies by Yaghoubi et al., Ghanbari et al. (7, 24), and Shinde et al. that declared the performance of nursing staff was lower than the performance of students. The reasons for the inconsistency and poorer performance of the staff in these studies were factors such as considerable work stress, poor knowledge, lack of training, having too much workload, and avoiding hand contact with cleaners and disinfectants.

There was no significant relationship between staff performance and age, work experience, and passing training courses. This is consistent with research by Fashafsheh et al. (18), Hamid et al. (25), and Gijare et al. Similarly, AL Rawajfah et al. (23) noted that there was no significant relationship between performance and having long work experience. However, the relationship between work experience and performance regarding nosocomial infections was significant in Sharif et al.'s study (21). There was no statistically significant difference between the performance scores of staff from three hospitals. However, there was a statistically significant difference between the scores of personnel from different wards in which, CCU and NICU personnel outperformed people from other wards. This could be explained by the fact that patients in these wards have general weaknesses due to illnesses, a weakened defense system, and long hospitalization; thus, these patients are highly susceptible to infections. Therefore, the staff of these wards are more sensitive and careful in their work.

One of the limitations of this study was the method of self-reporting in data collection, which could be influenced by the characteristics of individuals in reporting their performance.

In this study, the performance of medical staff and students was at a good level. Also, there was no significant difference between the performance of medical staff and students. In addition, it was not related to demographic components, and only people from CCU and NICU departments scored higher. Based on these findings, it can be concluded that nurses at different levels of education, with different demographic characteristics, and different work environments have a good performance in controlling infections. This is a strong point in the nursing profession.

This article was derived from a research project approved by Behbahan Faculty of Medical Sciences under code IR.BHN.REC.1398.005, which has been confirmed by the Ethics Committee. The authors thank the Behbahan Faculty of Medical Sciences that sponsored this research project, as well as the nursing staff and nursing students participating in the study.

Copyright © 2020, International Journal of Infection. This is an open-access article distributed under the terms of the Creative Commons Attribution-NonCommercial 4.0 International License (http://creativecommons.org/licenses/by-nc/4.0/) which permits copy and redistribute the material just in noncommercial usages, provided the original work is properly cited.
download pdf 135.12 KB Peer Review Comments ( 102.44 KB) Get Permission (article level) Import into EndNote Import into BibTex
Number of Comments: 0