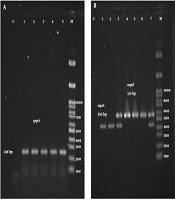 The emergence and spread of drug resistance among Klebsiella pneumoniae clinical isolates have limited the treatment options for these bacteria. Efflux pumps are considered as one of the key mechanisms of antibiotic resistance in K. pneumoniae isolates.

In total, 100 K. pneumoniae isolates were obtained from urine samples, and an antimicrobial susceptibility test was conducted using the disk diffusion method according to the Clinical and Laboratory Standards Institute (CLSI) instructions. Polymerase chain reaction (PCR) was done for the detection of efflux pump genes including, oqxA, oqxB, and qepA, and their association was statistically analyzed with resistance to antibiotics.

The highest rate of resistance was obtained against trimethoprim-sulfamethoxazole (72%), amikacin (70%), levofloxacin (68%), gentamicin (56%), ceftazidime (56%), and ceftriaxone (51%), and the lowest resistance was against imipenem (10%). Thirty one percent of isolates were multidrug resistant (MDR). Molecular distribution test showed that 57% and 56% of isolates carried the oqxA and oqxB genes, respectively. Also, the frequency of qepA genes was 21%. The presence of oqxA/oqxB and qepA efflux genes were significantly associated with fluoroquinolone and beta-lactam resistance phenotypes (P < 0.05).

Klebsiella pneumoniae is one of the most important causative agents both in the form of community and hospital-acquired infections such as urinary tract infections, septicemia, pneumonia, and meningitis (1). Multidrug resistance has clinically developed anxiety, mainly for the elderly and immunocompromised patients. Also, infants with immature body physiology have the least ability against infection from multi drug-resistant (MDR) pathogens (2).

Antimicrobial resistance can happen due to a variety of mechanisms, including drug target alteration, enzymatic inactivation or modification of drug, and the prevention of drug penetration or accumulation. Efflux pumps are essential in drug resistance among Gram-negative bacteria as they actively pump antibiotics out of the cell and cause the accumulation of drugs inside the bacterial cell to decrease. Efflux pumps are a major concern as they can generate a concurrent resistance to several drugs (3).

Among the efflux pumps, the resistance-nodulation-division (RND) family, including OqxAB and AcrAB, are important in creating antibiotic resistance in Gram-negative bacteria, especially K. pneumoniae. The OqxAB pump consists of two main domains: OqxA, a periplasmic part, and OqxB, a transmembrane protein, whose genes are located on both the chromosome and the plasmid (4). The OqxAB multidrug efflux pump is responsible for developing the reduced susceptibility or resistance to fluoroquinolones, such as flumequine, ciprofloxacin, and norfloxacin (2). In addition to quinolones, they confer resistance to other antibiotics, disinfectants, detergents, and antiseptics (5). A high prevalence of chromosomal or plasmid-mediated OqxAB has been reported in K. pneumonia, indicating a potential pool of this resistance determinant (2, 6, 7).

Another quinolone-specific efflux pump is QepA, which belongs to the major facilitator subfamily (MSF). QepA is a 14-transmembrane-segment MFS transporter encoded by the qepA gene and causes a decreased accumulation of norfloxacin (3). Minimum inhibitory concentrations (MICs) of ciprofloxacin, enrofloxacin, and norfloxacin were 32- to 64-fold higher in QepA-expressing test strains compared to host strains (8).

3.1. Clinical Samples and Identification of Bacteria

In this cross-sectional study, directed from March 2018 to April 2019, 100 non-repetitive urine isolates of K. pneumoniae were obtained from Milad Hospital in Tehran, Iran. Each urine sample was cultured on the Mac Conkey agar, and blood agar (Merck, Germany) followed by incubation at 37°C for 18 - 24 h. The isolates were then identified as K. pneumoniae by common microbiological and biochemical tests, including Gram-staining, catalase, oxidase, MR-VP, urease production, citrate utilization, and motility (9).

Total genomic DNA was acquired via a DNA extraction kit (CinnaGen, Iran) based on the instructions of the kit manufacturer. The primer sequences used in this study are listed in Table 1. PCR was conducted in a volume of 25 µL PCR reaction mixture including 1 µL DNA template, 1 µL of each primer, 12.5 µL of PCR master mix (Amplicon Co., Denmark), and 10.5 µL of ddH2O. The PCR reaction was conducted with the following PCR procedure: initial denaturation at 95°C for 1 min, denaturation at 95°C for 45 s, annealing at 60°C for 45 s, extension at 72°C for 1 min (35 cycles), and the final extension at 72°C for 5 min. In the end, 10 µL of the amplicons were detected on 1% agarose gel electrophoresis.

Table 1. The Sequences of Used Primers

The association between the resistance to antibiotics and the presence of efflux genes was analyzed by SPSS version 20 using the chi-square and Spearman correlation coefficient tests, and a P value less than 0.05 was considered significant.

The results of the PCR test for oqxA and oqxB genes showed that 57% and 56% of strains were the carriers of these genes, respectively. In addition, 52% of isolates carried both genes simultaneously. The results of the molecular test also showed that 21 isolates were positive for the qepA gene on the electrophoresis test, and 15 isolates harbored all three genes. Figure 1 depicts the electrophoretic pattern of studied genes. 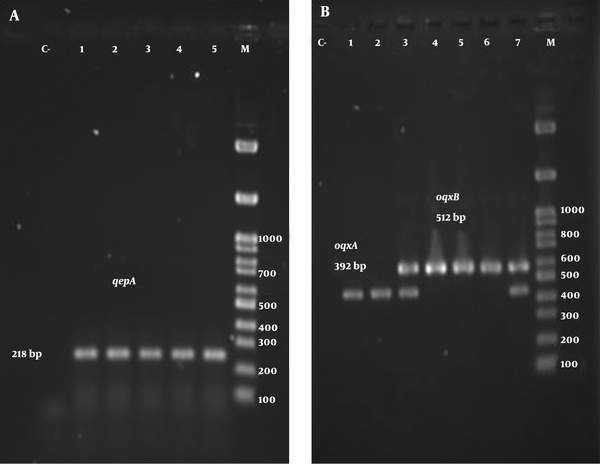 The results of PCR on 1% agarose gel electrophoresis. A, amplification of qepA; B, oqxA and oqxB; M; DNA size marker (100 bp).

Table 3. Significant Relationships Between the Efflux Genes and Antibiotic Resistance

K. pneumoniae is one of the most important causative agents of community and hospital-acquired infections worldwide. Awareness of antimicrobial susceptibility and genetic determinants that contribute to resistance in this bacterium can help control infections and reduce mortality and morbidity. The high resistance rate was related to ciprofloxacin (49%), amikacin (70%), trimethoprim-sulfamethoxazole (72%), gentamicin (56%), ceftazidime (56%), and levofloxacin (68%). In contrast with our data, Amiri et al. (13), posited that resistance to cefotaxime, ceftriaxone, and ceftazidime was 59%, 65%, and 67%, respectively. This conflict may be related to the year of study. Resistance to some antibiotics has increased significantly over the years. For instance, in the present study, 70% of the isolates were resistant to amikacin, while in studies conducted in 2014, 26% (14) in 2015, 35% (15), and in 2019, 65% (16) of isolates were resistant to amikacin. In the present study, resistance to ciprofloxacin increased from 30% in 2013 (17), 33% in 2015 (15), and 43% in 2019 (18), to 49%. This increasing resistance to antibiotics indicates the indiscriminate and uncontrolled use of antibiotics, as well as the acquisition of numerous antibiotic resistance mechanisms in the K. pneumoniae. One of the most worrisome findings in this study was the resistance of K. pneumoniae strains to imipenem. Since carbapenems are used as the first-line drugs, the treatment of antimicrobial-resistant infections (19), resistance to imipenem can lead to serious problems in the treatment of K. pneumoniae infections.

The results of the PCR test for oqxA and oqxB genes showed that 57% and 56% of isolates were carriers of these genes, respectively. Also, 52% of isolates carried both genes simultaneously. The prevalence of oqxA and oqxB genes in the study conducted by Zomorrodi et al. (18) was 69.7% and 72.1%, respectively. Higher prevalence of oqxA and oqxB were obtained among K. pneumoniae strains isolated in Spain (76% and 75%, respectively) (7). In our study, 21% of K. pneumoniae isolates harbored the qepA gene, which was higher than those reported by Goudarzi et al. (20), (2%) and Heidary et al. (1), (4%). The genetic diversity of strains, geographical distance, type of samples, and the number of samples are among the main reasons for the discrepancy between the prevalence of efflux genes in the present study and other studies.

The high frequency of efflux genes in this study is a serious concern, so we require a careful control of drug administration and identification of resistant isolates to control infection and prevent the spread of drug-resistant bacteria. We found a significant association between the presence of the efflux genes and resistance to fluoroquinolone and beta-lactam antibiotics, which signifies the need for novel treatment strategies to reduce the incidence of resistance.

Copyright © 2020, International Journal of Infection. This is an open-access article distributed under the terms of the Creative Commons Attribution-NonCommercial 4.0 International License (http://creativecommons.org/licenses/by-nc/4.0/) which permits copy and redistribute the material just in noncommercial usages, provided the original work is properly cited.
download pdf 816.44 KB Get Permission (article level) Import into EndNote Import into BibTex
Number of Comments: 0