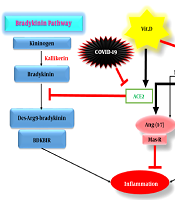 In late 2019, a viral disease called acute respiratory syndrome coronavirus 2 (SARS-CoV-2 or COVID-19) spread from China and has now infected many people worldwide (1). Generally, the immune system response to the infection is associated with inflammation, pain, and decreased tissue function (2). Patients with COVID-19 die in critical condition due to acute respiratory distress syndrome (ARDS) and dysfunction of several major organs. Increased release of cytokines plays a key role in the pathology of this disease (3). At present, the rapid spread of this disease due to the lack of effective control has caused serious concerns in patients with underlying conditions such as diabetes, cardiovascular diseases, autoimmunity, hypertension, and pulmonary diseases (4). No specific treatment has yet been found for COVID-19, and current drugs have not shown any desired function (5).

The SARS-CoV2 virus employs the angiotensin-converting enzyme 2 (ACE2) to enter host cells (6). The host protein of ACE2 is expressed in almost all tissues, but its expression is higher in the respiratory tissue epithelium, kidney, cardiovascular system, gastrointestinal tract, and type I and II alveolar cells (7, 8). The protein acts as one of the key components of the renin-angiotensin system (RAS). At the beginning of the RAS pathway, the renin enzyme, which is synthesized in the kidney, converts angiotensinogen (synthesized in the liver) to angiotensin I (AngI), which has 1 - 10 amino acids and subsequently is converted to Ang II (1 - 8 amino acids) by ACE. Through a pathway mediated by Ang II receptor type 1 (AT1R), Ang II triggers inflammation, fibrosis, hypertension, and oxidative stress. Angiotensin I and II peptides are converted to Ang (1 – 7) by the act of endopeptidase (NEP) and ACE2 enzymes, respectively. The bioactive Ang- (1-7) peptide, through the Mas-receptor, initiates anti-inflammatory and anti-fibrotic processes and lowers blood pressure by inducing the release of nitric oxide (9).

When SARS-CoV-2 binds to ACE2, it prevents the conversion of Ang II to Ang-(1-7), resulting in the accumulation of Ang II and activation of inflammatory pathways (10). The virus also enhances the bradykinin (BDK) signaling pathway, exaggerating inflammation. This is because ACE2 inhibits the conversion of BDK to its bioactive derivative, des-Arg9 bradykinin (DABK), and prevents the formation of a complex between DABK and bradykinin B1 receptor (BDKB1R) in pulmonary epithelial cells, suppressing acute pulmonary inflammation. In a study to investigate ARDS, by knocking out the ACE2 gene in mice, it was reported that the lung disease incurred more severe clinical symptoms and greater vascular permeability along with pulmonary edema (11). The inhibition of pulmonary ACE2 by endotoxin inhalation caused severe lung damage in a mouse model due to the activation of the DABK/BDKB1R inflammatory pathway, increased pro-inflammatory factors such as C-X-C motif chemokine 5 (CXCL5), macrophage inflammatory protein 2 (MIP2), C-X-C motif chemokine 1 (KC), tumor necrosis factor-alpha (TNF-α), and finally enhanced neutrophil infiltration into the lung (12). In lipopolysaccharide (LPS)-induced ARDS, inducing ACE2 expression increased the conversion of Ang II to Ang I, activated Ang-(1-7)/Mas-receptor-mediated anti-inflammatory pathways, and suppressed nuclear factor-κB (NF-κB)-mediated inflammatory reactions (13) and pro-inflammatory genes’ expression (14).

Vitamin D belongs to the group of fat-soluble vitamins and has several roles in the body, acting as an important hormone and intestinal absorber of calcium, magnesium, and phosphate. It is derived from subcutaneous 7-dehydrocholesterol with the help of the sun’s ultraviolet rays. The produced cholecalciferol (vitamin D3) is then converted to calcidiol (25-hydroxy D3) by the 25-alpha-hydroxylase liver enzyme, which is the most important metabolite of vitamin D in the body and is used to determine vitamin D levels in serum. The active form of the vitamin, called calcitriol (1,25-dihydroxy D3), is produced by the 1-alpha hydroxylase renal enzyme (15).

Studies have shown that vitamin D plays a protective role against COVID-19 by reinforcing the immune system via reducing the production of TNF-α and interferon γ (IFN-γ), supporting cellular connections, and inducing regulatory T cells (16), finally culminating in reduced production of anti-inflammatory cytokines during acute lung injury (ALI) and ARDS (17). Moreover, vitamin D receptor (VDR) is highly expressed in the lungs. In mice models of LPS-induced ALI, more severe symptoms were observed in animals with knockout VDR gene; however, the use of paricalcitol (a vitamin D analog) prevented further damage to the alveolar tissue of these animals (18), partly via inducing ACE2 production and the anti-inflammatory Ang - (1-7) /Mas pathway and suppressing the renin and ACE/Ang II/AT1R inflammatory branch (19). In mice with LPS-induced ALI, vitamin D consumption increased the gene expression of ACE2 and VDR, which played significant roles in the recovering of mice (20). Nevertheless, increasing vitamin D levels up to the normal range can increase ACE2 expression, which like a double-edged sword, can cut RAS (Ang II/AT1R) and BDK (DABK/BDKB1R) inflammatory pathways (Figure 1), leading to severe pulmonary inflammation in COVID-19 patients. 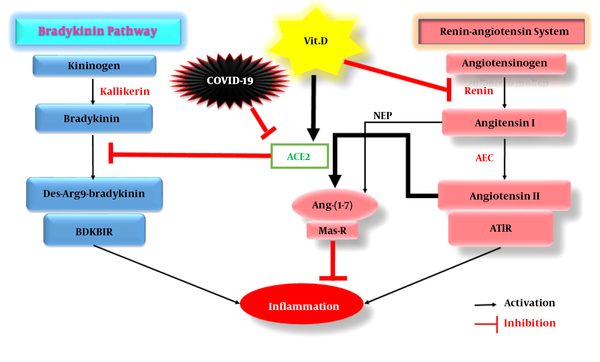 Copyright © 2021, International Journal of Infection. This is an open-access article distributed under the terms of the Creative Commons Attribution-NonCommercial 4.0 International License (http://creativecommons.org/licenses/by-nc/4.0/) which permits copy and redistribute the material just in noncommercial usages, provided the original work is properly cited.
download pdf 480.99 KB Get Permission (article level) Import into EndNote Import into BibTex
Number of Comments: 0