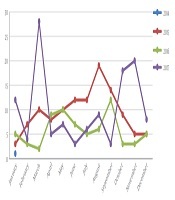 Epidemiological Characteristics of Human Brucellosis During 2014 - 2017 in Salmas, Iran

Despite substantial efforts to control the disease, brucellosis remains one the most rampant zoonotic infections among agricultural and rural populations. It is still considered a major public health challenge in endemic areas, including Iran.

Regarding the high prevalence rate of brucellosis in northwest of Iran and the occupational nature of the disease, this study intends to describe the epidemiological pattern of brucellosis in Salmas, Iran, during 2014 - 2017.

This cross-sectional study was conducted using the data collected using a checklist designed to investigate the personal health records of patients available at Urmia University of Medical Sciences from 2014 to 2017. Data analyses were conducted using SPSS, version 19. Chi-square, t-test, and the Cochran-Armitage χ2 test for trend were performed.

Among 417 brucellosis cases, the total incidence rate was 52.73 cases/100,000 inhabitants over the four-year study. The prevalence rate of brucellosis was higher in men, and the male to female ratio was 1.38. The 31 - 45 years age group was the most infected. Summer season showed a higher prevalence. Brucellosis was more common among housewives-stockbreeders. Cheese was the most frequently consumed unpasteurized dairy product. The majority of patients were from rural regions.

The study shows a significant increase in the prevalence of human brucellosis in Salmas, hence the disease has to be regarded as a public health priority. Educating farmers and inhabitants of endemic areas to take preventive measures can play a significant role in controlling brucellosis.

Brucellosis (Malta fever) is a zoonotic infectious disease caused by Brucella species, which are aerobic, Gram-negative, non-motile, and facultative intracellular coccobacilli responsible for the disease in a broad spectrum of mammalians. Brucella abortus and Brucella melitensis are the two common human pathogens in Iran (1, 2).

Brucellosis is a major concern in domestic and wild animals. It is transmitted to human through close contact with livestock, and ingestion of raw meat, milk, and other non-pasteurized dairy products. Therefore, brucellosis is considered an occupational disease, especially among laboratory workers, veterinarians, slaughterhouse workers, ranchers, and farmers. Other transmission routes include inhalation, conjunctiva, and skin cuts. Brucellosis is rarely spread from human to human (3).

Brucellosis is still one the most challenging health issues in the developing countries, including Iran. Brucellosis is difficult to control in animals because despite being the most common zoonotic disease, it is often neglected by scientists for practical reasons (4). Moreover, the wide range of clinical manifestations result in difficulty in definitive diagnosis because they overlap with symptoms of other diseases. Proper diagnosis is one of the main problems in the treatment of brucellosis (5).

Brucellosis has a high prevalence in developing countries, and due to the lack of proper surveillance and control programs, there has recently been an increase in brucellosis incidence rate (6). Considering its complicated nature, brucellosis is regarded as a grave threat to public health. The disease is known to cause abortion in cows during the three last months of pregnancy and subsequently decrease milk production (7). Fever, lethargy, and arthritis are important symptoms of brucellosis contamination in humans (8).

According to the World Health Organization (WHO) report, the estimation of total worldwide brucellosis cases is around 500,000 annually, while this value is one-fifth of all cases. Due to the consumption of raw milk and cattle-related occupations, brucellosis is prevalent in the east Mediterranean countries, South America, and possibly Sub-Saharan Africa (9, 10). Brucellosis is an endemic disease in Iran, and review of the literature indicates that numerous studies have been conducted on the epidemiology of brucellosis in Iran.

Salmas is the capital of Salmas County, West Azerbaijan Province, Iran. It is located near the eastern border of Turkey. It coordinates are 38°11’41”N 44°45’53”E at a 90-km distance from Urmia (capital of the province) in south, 45 km from Khoy in north, and 55 and 90 km from Tasouj and Shabestar, respectively, in east. According to the 2016 census conducted by the Statistics Center of Iran, the city’s population is 196,546, of which 101,440 people are settled in urban areas, and 95,406 people are settled in rural areas.

Considering the high prevalence of brucellosis in northwest of Iran and the occupational nature of the disease, this study aims to investigate brucellosis epidemiology in Salmas where most people are stockbreeders.

This cross-sectional study was carried out using the personal health records of all patients visiting governmental and private clinics and laboratories in Salmas over a four-year period (2014 - 2017). A checklist was designed to collect data from the health surveillance system of Urmia University of Medical Sciences regarding age, sex, place of residence (urban/rural), occupation, date of diagnosis, history of animal contact, history of consuming unpasteurized dairy products, clinical signs and symptoms of disease, and results of diagnostic laboratory tests. According to national guidelines (Iranian Center for Disease Control [ICDC], 2012), the inclusion criteria in this study were both clinical signs and symptoms. Brucella cases were defined by demonstrating a Wright titer of 1/160, a Coombs titer of 1/320, and a 2-mercaptoethanol (2-ME) titer of 1/80 for patients with clinical signs and symptoms compatible with brucellosis. Data analysis was carried out by the SPSS version 19, using the chi-square test, t-test, and the Cochran-Armitage χ2 test for trend at a signiﬁcance level of P < 0.05.

Table 1. Age Frequency Distribution of Patients with Brucellosis During 2014 - 2017

Table 2. Statistical Characteristics of Brucellosis in an Annual Ordera

The highest prevalence was observed in summer with 123 (29.49%) cases, and the lowest prevalence was reported during spring with 93 (22.30%) cases (Figures 1 and 2). In March, brucellosis showed the highest incidence of 55 (13.18%) cases, while the lowest incidence was recorded in June with 22 (5.27%) cases. In the first half of the year, the prevalence of the disease was higher than the second half, such that 49.89% of cases were observed in the first six months (Tables 3 and 4). The most common occupations involved in brucellosis are rural occupations. Women working as housewives-stockbreeders with 116 (27.81%) cases, and men working as stockbreeder-farmers with 110 (26.37%) cases exhibited the highest prevalence, while the least prevalence was observed among stockbreeding workers with 4 (0.95%) cases (Table 5). A calculated P-value of 0.000 was less than 0.05, indicating the signiﬁcance of the correlation between the numbers of patients and different occupations.

Table 5. Frequency of Occupations and Dairy Products Correlated with Brucellosis

Fresh cheese and raw milk (non-pasteurized) were the dairy products consumed most commonly by 138 (33.10%) and 119 (28.54%) cases, respectively. Ice cream was the least commonly consumed dairy product, with 7 (1.67%) cases of brucellosis reported.

Over the course of the study, the incidence rate of human brucellosis was calculated to be 52.73 cases/100,000 inhabitants. Various studies have reported different incidence rates in various regions of Iran. From 2013 to 2015, Chalabiani et al. (11) reported the high prevalence rate of 25% in Hamadan Province followed by Markazi and Mazandaran with 24.7% and 22.5%, respectively. In 2011, Pakzad et al. (12) calculated the highest prevalence rate of 317 cases/100,000 in Koohrang County of Chaharmahal-Bakhtiari province. Furthermore, from 2012 to 2014, they reported the incidence rates of 384, 534, and 583/100 000, respectively, in Charuymaq County of East Azerbaijan Province (12). In the survey carried out by Mollalo et al. (13), the prevalence rates of human brucellosis in west and northwest were reported to be significantly higher than in any other region of Iran. As Pakzad et al. (12) presented in 2018, most of the high-risk areas for brucellosis were located in west and northwest of Iran, which confirms the findings of the present study.

In the present study, a higher prevalence rate of brucellosis was observed in men compared to women. In 2018 with a population of 191921 people, the highest prevalence rate was reported to be 64 cases/100,000. In the same year, 53.65% of patients were male, and 46.35% of patients were female. It is also confirmed by other studies that men seemed to be affected more than women. Chalabiani et al. (11) reported that 57.6% of patients were male, and 42.3% were female. Furthermore, in the studies conducted by Kassiri et al. (18) and Ebrahimpour et al. (17), a higher prevalence rate of human brucellosis was observed among men compared to women. In 2010, Donev et al. (22) indicated that men were infected with human brucellosis more often than women. There are, of course, reports whose results contrasted with the present findings. In Uganda, Makita et al. (23) observed a significantly higher prevalence rate among women than men. Furthermore, Nematollahi et al. (24) also displayed that female sex was a significant risk factor for human brucellosis in Hamadan province during 2009 - 2015. Since human brucellosis is mainly transmitted through contact with livestock and consumption of unpasteurized dairy products, the disagreement between various studies in the male-female frequency of the disease can probably be attributed to the fact that regional and cultural differences play a major role in the higher involvement of men or women in livestock-related activities.

In terms of occupation, women working as housewives-stockbreeders with 116 (27.81%) cases and men working as stockbreeder-farmers with 110 (26.37%) cases showed the highest prevalence, while the least prevalence was observed among stockbreeding workers with 4 (0.95%) cases. Although occupation is an important risk factor in contracting brucellosis, in the developing countries it is not merely an occupational disease, but other risk factors such as ingestion of unpasteurized dairy products, educational status, and environmental sanitation are also involved (25).

It is concluded that human brucellosis has to be considered a public health priority in rural regions to be prevented or controlled by educating farmers and people living in endemic areas. Lack of hygiene education programs, especially among the ignorant and the illiterate, is one of the imperative factors for declining human brucellosis prevalence. Unfortunately, the authors’ access to personal health records was restricted because, in most of the cases, the data were not well-documented.

We would also like to express our deepest gratitude to Saber Taghinejad, who provided the statistical inference, which greatly assisted the research.

Copyright © 2021, International Journal of Infection. This is an open-access article distributed under the terms of the Creative Commons Attribution-NonCommercial 4.0 International License (http://creativecommons.org/licenses/by-nc/4.0/) which permits copy and redistribute the material just in noncommercial usages, provided the original work is properly cited.
download pdf 232.26 KB Peer Review Comments ( 165.30 KB) Get Permission (article level) Import into EndNote Import into BibTex
Number of Comments: 0