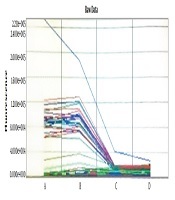 Toxoplasmosis is caused by Toxoplasma gondii, a protozoan parasite, and is among the diseases generally referred to as neglected tropical disease (NTD). It can be a reason for impulsive abortion in pregnant women or hereditary chorioretinitis in neonates.

The toxoplasmosis was significantly high in pregnant women. It is recommended that Toxoplasma gondii tests should be included as a routine test during antenatal.

Toxoplasmosis is a broad-based zoonosis disease caused by Toxoplasma gondii, which is an oblige parasite occurring within the cells whose transporter and definitive hosts are cats in the homes and other cats (1, 2). The infection can also spread congenitally to newborns from their mothers (3, 4). Major infection in pregnancy can cause spontaneous abortion, death shortly before and after birth, or abnormal organ development in the fetus, contingent on the stage of the pregnancy (4, 5). Toxoplasmosis developed in the first trimester and second trimesters of pregnancies commonly show the severity of illness in newborns, though infection through the placenta is least probable during the first trimester (5). Infections during pregnancy in one-third of cases can be acquired by the fetus through the placental blood as the tachyzoite, which is the invasive/aggressive form of the T. gondii, is capable of crossing the placenta (5). Each fetus that contacted T. gondii during the stages of pregnancy can develop inborn toxoplasmosis with substantial hereditary nerve and visual disorder (4). The definite pervasiveness of infection due to T. gondii in pregnancy so far is not known but differs from country to country. Topical studies estimated the prevalence by the enzyme-linked immunosorbent assay (ELISA) method. The frequency of IgG antibodies was 38% in Iran and 50% in Brazil, whereas the frequency of 4% was reported for IgM in Iran and 90% in Brazil (6, 7)). In Nigeria, a seroprevalence of 44% was recorded (8). During pregnancy, the risk elements for toxoplasmosis are not very clear as some authors implicated domestic cats, eating raw meat, contaminated vegetables (9, 10) which are at variance with other studies that could not find such a relationship (6, 9). Owing to the obstetric and congenital squeals, the uncovering of primary toxoplasmosis is most life-threatening in pregnancy.

The aim of the present study was to determine the preponderance and risk factors of toxoplasmosis in pregnant women (PTW) and non-pregnant females (NPF) attending antenatal clinics of two tertiary hospitals in Port Harcourt.

The two tertiary hospitals were: Port Harcourt University Teaching Hospital (UPTH) and Rivers State University Teaching hospital (RSUTH), both located at Rivers State. UPTH is located within latitude 4°90’ N and longitude 6°93’ E, while RSUTH is located within latitude 4°78 N and 7°01 E. They are Federal (UPTH) and State (RSUTH) governmental hospitals as well as among the biggest referral healthcare facilities in Niger-Delta Region, Nigeria.

A total of 380 women participated in this study, 200 PTW and 180 NPF volunteers (which served as controls) were randomly selected for the study. HIV seropositive women were excluded from this study.

Pre-tested questionnaires taking into consideration information about age, sex, livelihood, ownership of pets, and other possible factors were administered to respondents.

Ethical approval was obtained from the Committees in charge of Ethical matters of Port Harcourt University Teaching Hospital and Hospital Management Board of Rivers State, as well as oral/written informed consent was obtained from all study participants.

From each of the 380 women, 3 ml of venous blood was collected by venipuncture from February to August 2016. To obtain the required serum, the samples of blood collected were allowed to stand to clot and then centrifuged for 5 minutes at 1500 rpm. Sera were collected and kept at 2°C. The reagents, developing plate’s cards, and specimens were allowed to thaw and were brought to a temperature of 24°C. The samples were treated using Bio Check for IgG and IgM enzyme, immunoassay test kit specific for Toxoplasma Immunoglobulins using standard laboratory methods.

Commercial Toxoplasma gondii real-time PCR reagent with DNA extraction kit (by Liferiver Shanghai Zhijiang BiotechnologyCo. Ltd www.liferiverbiotech.com) was used according to the manufacturer’s procedure to extract DNA from the samples. The Real-time PCR method was applied to all samples using commercial standard T. gondii gene primers provided by the manufacturer (Liferiver Biotech) and standard recommended methods. Optimization studies were performed to determine the synthesized primers and best study concentrations for the probe. According to the results of this study, for 35 µL reaction mix, reaction volume was set with LightCycler probe mastermix 1 µL of each primer (10 pM), probe (4 pM) of 0.4 µL, molecular grade water of 5.6 µL, and DNA of 2 µL. The amplification cycles of PCR were as follows: 5 minutes at 95°C for initial denaturation, 40 cycles of two stages 15 seconds at 95°C for denaturation, and 30 seconds at 60°C for annealing-extension in a LightCycler Real-time PCR device (Roche, Mannheim, Germany) 10.

Two-way factor analysis of variance (ANOVA) was used to analyze the data obtained from this study. Differences were considered to be significant when P < 0.05.

The overall seroprevalence of toxoplasmosis in 380 serum samples was 101 (26.6%); PTW and NPF recorded seroprevalence of 61 (16.1%) and 32 (8.4%), respectively for IgG as well as 5 (1.3%) and 3 (0.8%) for IgM (Table 1), respectively. IgM-positive cases were all authenticated by PCR and were all negative. Figure 1 shows the result of the PCR spectral analysis for samples tested. Age groups 35 - 39 and > 40 showed the highest IgG seroprevalence of 17 (24.3%) and 4 (18.2%) in PTW and NPF, respectively (Table 1). The difference in the rate of seropositivity to T. gondii antibodies was not significant based on occupation, educational status, and trimester (Table 1). Table 2 shows the risk factors associated with seroprevalence that affect the transmission of T. gondii in the study population. Washing fruits before consumption and drinking treated water had a significant impact on the seroprevalence of toxoplasmosis.

Table 1. Toxoplasmosis Seroprevalence Based on Individual and Socio-Demographic Factors in Port Harcourt (P < 0.05)

The overall seroprevalence of 33 % and 19.4% among pregnant women (PTW) and non-pregnant female (NPF) controls, respectively, in Port Harcourt, Nigeria, was observed in this health institution-based study. This report slightly varies with the results obtained in previous studies, which indicated a prevalence of 24.8%, 38.9%, 44.4%, 44.5%, and 64% in Pakistan, South Eastern Iran, Abuja (Nigeria), Northern Tanzania, and Debre-Tabor (Ethiopia), respectively (8, 11-14). The causes of these variations in seroprevalence are attributed to environmental distinctiveness, prevailing risk factors, and hygienic levels (15). Toxoplasmosis in pregnancy can predispose the fetus to serious complications and severe damage once the infection is developed in pregnancy. Therefore, it is recommended that the serum of pregnant women be tested for toxoplasma IgG and IgM to avoid intrauterine infection and complications (11, 12, 15).

The samples that were T. gondii-specific IgM-positive were subject to real-time PCR and were all negative for T. gondii infection. This may be due to the fact that peripheral blood was used in the present study, which is likely to have insufficient circulating parasites since IgM antibodies specific for T. gondii may not remain detectable for long periods of time outside the acute infection (1, 7, 19, 20). In this regard, it emphasizes the practicality of other relevant samples (amniotic fluid or placenta tissue) used in the diagnosis of infection due to T. gondii among pregnant women. Although amniotic fluid or placenta samples may be more relevant for the diagnosis of toxoplasmosis by PCR, the cumbersome nature of the procedure is a disadvantage (11, 12).

The findings of the present study highlighted the contests of relating molecular diagnostic tests and serological data and also getting the right samples that are suitable for detection of T. gondii DNA using the PCR method. IgM test that is particular for T. gondii is employed by many laboratories to conclude that a patient had a recent infection (21). Statistically, there was no significant difference in the rate of seropositivity based on age, occupation, educational status, and trimester. This observation is consistent with the findings of previous reports (12, 14, 17). However, a study reported a correlation between acute toxoplasmosis and the first trimester (13).

Factors found to significantly influence the transmission of T. gondii in this study were engagement in farming or gardening, drinking untreated water, and eating unwashed or improperly washed fruits. This observation is largely supported by a large-scale seroepidemiological report on toxoplasmosis conducted in similar studies (21-23). However, some other studies established that raw vegetable consumption was accompanied by a reduced likelihood of T. gondii infection as well as the lack of links between eating raw vegetables and T. gondii infection (11, 17, 24). A possible explanation for our results was the unsanitary eating practices, and food preparation lifestyles among the group studied. More than two-third (83.4%) of the participants of this study did not drink treated water, which increased the likelihood of infection with T. gondii.

Public health awareness campaigns on toxoplasmosis transmission dynamics and risk factors are advocated. Eating unwashed fruits, drinking untreated water, engaging in farming or gardening without protective gear or equipment should be avoided because they are possible risk factors of Toxoplasma gondii infection. There is a need for the introduction of toxoplasmosis screening among routine antenatal tests in healthcare facilities; this will greatly control congenital toxoplasmosis.

Copyright © 2021, International Journal of Infection. This is an open-access article distributed under the terms of the Creative Commons Attribution-NonCommercial 4.0 International License (http://creativecommons.org/licenses/by-nc/4.0/) which permits copy and redistribute the material just in noncommercial usages, provided the original work is properly cited.
download pdf 309.74 KB Peer Review Comments ( 181.87 KB) Get Permission (article level) Import into EndNote Import into BibTex
Number of Comments: 0