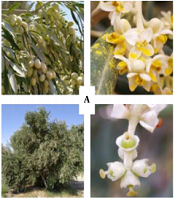 This study was done to investigate the antimicrobial activity of rosemary and olive extracts on antibiotic-resistant Escherichia coli isolated from quail feces in Zabol city.

Ethanolic and methanolic extracts of rosemary (leaf) and olive (leaf) plants were prepared using a rotary apparatus. Also, E. coli strains were isolated from poultry feces samples, the minimum inhibitory concentration and the minimum bactericidal concentration were determined by the microdilution method.

In general, methanol solvent and olive extract are highly effective against E. coli. Due to the obtained results and increasing resistance of bacteria to chemical antibiotics, it is suggested that with further studies on olives and the use of methanol solvent in the extraction of plant extracts, antibacterial compounds of olives and other plants be used in the treatment of bacterial infections.

Plant extracts and their active compounds have known antibacterial effects. They are widely used in traditional medicine to control the growth of pathogenic bacteria and food spoilage. In recent decades, due to drug resistance and side effects of chemical antimicrobial drugs, the scientific research approach has shifted towards the acquisition of plant bioactive substances. In general, plants can be considered as a source of potentially useful chemicals, if so far only a part of them has been exploited (4).

Escherichia coli is one of the most important members of the natural gut flora of warm-blooded animals. The importance of this bacterium is due to the presence of pathogenic strains that cause intestinal diseases and food poisoning in humans. Among the diarrheal E. coli strains, the Shiga toxin-producing Escherichia coli (STEC) strains are distinguished by their ability to cause severe human disease. Although no antibiotic treatment is required for this bacterium, many strains of this bacterium have shown multiple resistance to different antibiotics, which can be an important health concern (5-7). Therefore, there is a need for epidemiological monitoring of this bacterium.

Olive (Olea europaea L.) is one of the most important economic trees in the world and belongs to the Mediterranean region. Olive species have most of the characteristics of drought-tolerant plants. Thus, the olive tree can tolerate small amounts of soil water due to its morphological, physiological, and biochemical properties. In arid and semi-arid regions, soil water shortages are usually associated with high temperatures and high light intensities. In these areas, water is the most important environmental factor that affects the sustainability and production of plants. Therefore, to maintain water reserves in arid and semi-arid areas, cultivars suffering from water shortages should be cultivated in these areas. Although the olive tree is a drought-tolerant species, it has been observed that the yield of different olive cultivars in arid and semi-arid regions is different (8).

Rosemary (Rosmarinus officinalis) is a perennial plant that is of special importance in Iran due to its wide use in the pharmaceutical and health industries. It is native to the Mediterranean coast, and in Iran, Tehran province has the highest area under cultivation of this plant in the country. Rosemary or rosemary has special compounds that stimulate metabolism and speed up blood circulation, and dilate blood vessels and capillaries, leading to strengthening and rejuvenating the skin and hair. This healing plant is effective for treating rheumatism, paralysis, limb weakness, seizures, neurological and respiratory disorders, as well as liver and gallbladder failure (5).

Iran has a large variety of medicinal plants due to its diverse climate and large area. Therefore, in this study, two species of olives and rosemary were used for antimicrobial activity against antibiotic-resistant E. coli isolated from quail feces in Zabol city.

Fresh leaves of olive and rosemary plants (Figure 1) were collected from the Agricultural Research Institute of the University of Zabol and after identification and approval by the botanist of the Plant Department of Zabol University, were washed. The leaves were then spread out separately on paper at 35°C for three days. The dried samples were pulverized using a mortar and an electric mixer. To extract, a modified massage method was used, in which the powder of each plant was mixed with organic solvents of methanol (96%) and ethanol (80%) with a mass-volume ratio of 1:10 and at 40°C for 18 minutes, respectively, followed by stirring regularly for 24 hours in a shaker incubator. Watman paper No. 1 was used to remove large plant parts and the resulting solution was transferred to a rotary machine to remove excess solvent. The solution was then incubated at 40°C for 48 to 72 hours to obtain a dry powder from the extract. This powder was stored in dark glass containers at -4°C until use. 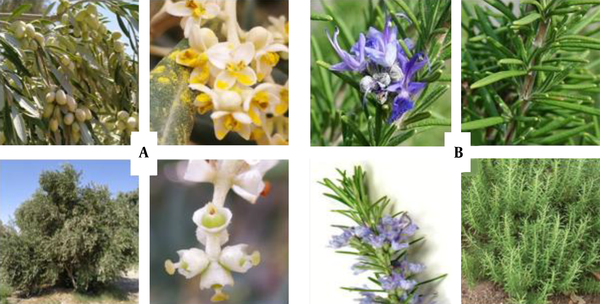 The various strains of E. coli used in this study were isolated from quail fecal samples and cultured on nutrient agar media. Isolated bacterial strains can be identified by a variety of methods, such as biochemical and bacteriological reactions and growth tests (oxidase, catalase, bacterial motility, glucose tests, such as lactose fermentation, sucrose, glucose) and standard tests (such as gram staining, acid-fastness staining, colony staining, and morphology) (9, 10). In the present study, after observing colony growth, hot staining and observation of cocci and Gram-negative diplococcic, as well as oxidase test, were used for identification. In the next step, the bacteria were definitively detected using biochemical samples, culture on mechanical agar and incubation at 37°C and 42°C, citrate test, motion test, and culture on medium (fermentation and oxidation) containing glucose.

Pure strains obtained on an artificial culture medium were identified using the relevant tests at the genus level. The microorganisms were stored at -80°C in a broth nutrient medium in 20% glycerol. Müller Hinton agar medium was used for disk diffusion and minimum inhibitory (MIC) and bactericidal (MBC) concentrations.

aEach bacterial code belonging to each strain was isolated from poultry feces samples.

aEach bacterial code belonging to each strain was isolated from poultry feces samples.

In a study, the inhibitory effects of rosemary extract on Gram-negative and positive bacteria were evaluated in vitro. It was reported that Proteus mirabilis and Enterococcus faecalis were the most sensitive and resistant bacteria to dilutions 1, 1.2, and 1.4, respectively. Also, E. faecalis and E. coli were the most sensitive bacteria to 1.8, 1.16, 1.32, and 1.64 dilutions of rosemary essential oil (11). In a study, alcoholic extracts of dried leaves and flowering branches of rosemary, tea grass, and Safflower were evaluated at different concentrations of 0.2, 0.3, and 0.4 g/ml. It was reported that in the first three hours, E. coli showed the lowest growth after exposure to the alcoholic extract of rosemary at all three concentrations than the other two plants. The least effect was related to the alcoholic extract of tea grass, but from the third hour onwards, these changes reversed and reduced the growth of E. coli (12, 13). In the present study, rosemary ethanolic extract had a greater effect on E. coli than methanolic extract, but olive methanolic extract had a greater effect on E. coli than ethanolic extract.

In the present study, ethanolic extract of rosemary and methanolic extract of olive were the most effective extracts on E. coli, which was similar to the previous results (11, 12). In a study (14, 15), the diameter of the growth inhibition zone of rosemary methanolic extract on S. aureus was between 8 and 15 mm, and also the diameter of the growth inhibition zone in Pseudomonas aeruginosa was between 15 to 18 mm. In another study to investigate the antimicrobial effects of rosemary essential oil, it was found that the growth aura of this essential oil on S. aureus was 18 mm (16) and also the positive effects of rosemary essential oil on Gram-positive bacteria of S. aureus and Bacillus cereus were reported (16-18). In the present study, the type of solvent and plant had different effects against E. coli.

Methanolic extract of Myrtus leaf (Myrtus communis L.), Saliva officinalis L., Glycyrrhiza glabra L., Citrus bigaradia L., Chicory root (Cichorium intybus L), Achillea millefolium L., Artemidia absinthium L., Heraclim persicum Desf. Ex Fischer, Peganum harmala L., and olive skin (Melia ozedarach L.) was investigated against Helicobacter pylori, and it was concluded that the plant extracts of wormwood, olive oil, licorice, sage, and Myrtle caused a growth inhibition zone of 15-14, 14, 14, 13, and 13, respectively, but other plant extracts did not have a significant inhibitory effect against H. pylori (19). In the present study, it was found that the methanolic extract of olive was more effective against E. coli, which was similar to the previous results (19, 20).

Antimicrobial properties of aqueous, ethanolic, and methanolic extracts of the olive in two clean and contaminated areas were assessed and it was concluded that regarding the antimicrobial activity of olive leaves, there was a difference between normal and polluted areas and different extracts; the ethanolic extract showed the most antimicrobial properties. These extracts had antibacterial effects against E. coli, P. aeroginosa, and Bacillus subtilis in clean areas. Therefore, people should be warned that olives planted in areas with polluted air (streets, parks, and houses) are only ornamental plants with no medicinal value (21, 22). In the present study, it was found that olive extract had a greater effect against E. coli than rosemary extract and even methanolic extract of olive than the ethanolic extract of olive.

In recent decades, the priority of research to develop new drugs has declined as the world faces drug resistance to pathogens. Another concern in this regard is the economic cost of treating drug-resistant infections due to the higher cost of effective new drugs and the longer treatment time of antibiotic-resistant bacterial infections than infections with susceptible bacteria, which makes it important to find a new treatment (5, 6, 24, 25). Antibiotics are valuable drugs for the treatment of many human diseases; however, overuse of these drugs will lead to microbial resistance. Therefore, scientists have prioritized research on different parts of medicinal plants to discover new drugs of plant origin (7, 26).

This article was performed using the material and equipment of the Agricultural Biotechnology Research Institute, University of Zabol.

Copyright © 2021, International Journal of Infection. This is an open-access article distributed under the terms of the Creative Commons Attribution-NonCommercial 4.0 International License (http://creativecommons.org/licenses/by-nc/4.0/) which permits copy and redistribute the material just in noncommercial usages, provided the original work is properly cited.
download pdf 4.18 MB Peer Review Comments ( 93.28 KB) Get Permission (article level) Import into EndNote Import into BibTex
Number of Comments: 0