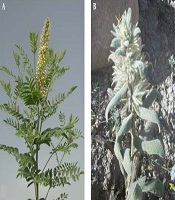 One of the most common gastrointestinal infections is Helicobacter pylori infection, which leads to gastritis, gastrointestinal ulcers, and eventually stomach cancer. Many chemical drugs are used to eradicate this bacterium; however, resistance to many drugs and recurrence of infection are some treatment problems. Among these, the role of herbal medicines is very important. Glycyrrhiza glabra and Salvia officinalis are some plants used to treat H. pylori infections. These plants grow in different regions of Iran, and it is important to study their effects on this bacterium.

Accordingly, this study aimed to isolate H. pylori strains and investigate the antimicrobial effects of G. glabra and S. officinalis ethanolic extract against this bacterium.

Helicobacter pylori specimens were isolated from endometrium biopsy of the stomach of patients who referred to Sistan and Baluchestan Hospital by culture method. Then, the antimicrobial effects of the ethanolic extracts of G. glabra and S. officinalis were investigated on H. pylori isolates by microdilution method.

According to our results, G. glabra and S. officinalis ethanolic extracts had high antibacterial activity against antibiotic-resistant strains. Regarding the continuous and reckless use of chemical drugs, unfortunately, increasing drug resistance in germs is increasing compared to chemical drugs day by day, as a result, be used from medicinal herbs. On the other hand, as the environment (weather and soil area) is effective in the type and amount of phytochemical substances, therefore, it is suggested that when using a medicinal plant for the treatment of diseases, should be addressed to the location of the plant and the type of tissue of the plant to achieve the best Therapeutic effect.

Nowadays, using new treatments such as herbal medicines is noticeable due to their less complications. Helicobacter can be present in the mucosal cortex of the gastric mucosa, as well as in the modified mucosa similar to the gastric mucosa that appears in the duodenum. It also has the ability to colonize in the esophagus and may play a role in wounding or inflammation (2, 3).

One of the important characteristics of this bacterium is the production of a large amount of urease enzymes. It has been shown that urea is an important virulence factor in bacteria that can contribute to colonization of the bacteria in the gastric mucus and creation of wound. Helicobacter pylori infection is a worldwide outbreak and occurs in all age groups. The prevalence of H. pylori differs from region to region, and largely depends on the general living standards in each region. Helicobacter pylori has a rotating and creeping motion, and it moves better and faster in viscous environments such as gastric mucus (4-6). H. pylori is a cause of gastritis and peptic ulcer disease and a risk factor for gastric cancer and lymphoid B-cell lymphoma in the gastric mucous membrane (7).

Using multiple antibiotics increases the amount of removal and reduces the risk of resistance (10). The dosage of antibiotics used to treat H. pylori is more than that used for other infections (11).

Antibiotics, inhibitors of gastric acid secretion, H2 blockers, and bismuth salts are the drugs of choice in the treatment of H. pylori, which are used in combination. However, despite the existence of drug treatments, the eradication of this bacterium is still a serious challenge, so that the failure rate of the mentioned treatments due to drug resistance is 5% - 20%. Furthermore, despite the complete cure of the disease, it recurs in many cases (12-14).

Glycosylated is one of the oldest medicines Abu Ali Sina has included in his book with a lot of therapeutic properties. The most important ingredient in licorice is glycyrrhizin; and glycosylated from saponins is 50 times sweeter than sugar. It is soluble in water and alcohol in high amounts, and its amount is intermittent and depends on the type of plant and climatic conditions of the growing area (15, 16).

A glycosylated decoction is used in the treatment of neurological cough, inflammation of the teat, colic, constipation, gastritis, gastric and duodenal ulcers, air swallow, intestinal bloating, and intestinal spasm (17).

Salvia officinalis, from the mint family, is an herbaceous plant with straight stems about 80 - 50 cm high. The leaves of this plant are opposite and light green. The flowers are bluish purple, pink, or sometimes white, grouped in the upper parts of the stem and spaced apart. The scientific name of this plant is derived from the Latin word salvara meaning healing, which refers to the many medicinal properties of this plant. This plant is the most valuable type of dark peppermint medicine (18, 19)

The purpose of this study was to isolate H. pylori strains and investigate the antimicrobial effects of ethanol extracts of G. glabra and S. officinalis on them.

Fresh leaves of G. glabra and S. officinalis plants (Figure 1) were collected from Zabol City in Iran and identified by a botanist from the University of Zabol. The powder of the plant leaf was mixed with organic solvents of ethanol (100%) and stirred regularly for 24 h in a shaker incubator. Watman paper no.: 1 was used to remove large plant parts, and the resulting solution was transferred to a rotary machine to remove excess solvent. The solution was then incubated at 40°C for 48 to 72 h to obtain a dry powder from the extract. This powder was stored in dark glass containers at -4°C until use (20). 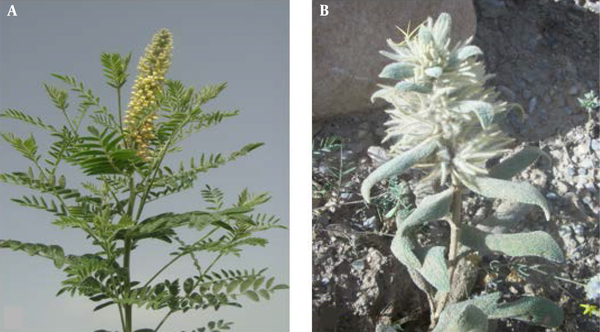 Appearance characteristics of Glycyrrhiza glabra (A) and Salvia officinalis (B) plants

A cross-sectional study was performed. A biopsy was obtained from the endometrium of the stomach with endoscopy. The necessary equipment and environments were transferred to the endoscope. The culture of biopsy specimens was carried out on Columbia enriched agar, with 5% sheep blood, 7% serum, vancomycin, and trimethoprim under microaerophilic conditions at 37°C. Suspected colonies of H. pylori were tested for biochemical oxidase, catalase, and urease.

Disc diffusion method was used to determine the sensitivity of isolated H. pylori to antibacterial compounds. First, the colonies were transferred to McFarland’s 0.5 Muller Hinton fluid. Then, they were cultured on a culture medium of enriched Muller Hinton agar with 7% sheep blood, and at the same time, antibiotic-containing disks purchased from Padtan Teb Company were placed on the medium. After 5 days of incubation at 37°C and microaerophilic conditions, the diameter of the H. pylori non-growth inhibition was determined. Four antibiotic disks, including metronidazole, tetracycline, amoxicillin, and clarithromycin were used to test the antibiogram.

Unfortunately, we could not use the standard strain of H. pylori due to shipment problems. Although we re-ordered and later received healthy samples, we no longer used the standard sample because the conditions of the test were different.

The results of S. officinalis plant ethanolic extract showed that the lowest MIC against H. pylori was equal to 3.1 ppm (12 strains were inhibited), while the highest MBC was 50 ppm (one strain was inhibited) (Table 2).

Due to the biological effects of this plant, a large amount of the plant is harvested annually from different areas of Iran and exported to other countries. In the central and southern regions of the country, the plant is on the verge of extinction, and the attention of producers has been focused on the northern and northwestern regions of the country.

Since one of the major uses of the plant is its anti-H. pylori properties, so it is important to study the best habitat of the plant. In our study, 30 (60%) cases were metronidazole-resistant, 15 (30%) were amoxicillin-resistant, 12 (24%) were tetracycline-resistant, and 2 (4%) were clarithromycin-resistant.

The antibacterial and synergistic properties of Zataria multiflora, Salvia verticillata, and Froriepia subpinnata ethanolic extracts on caries-causing bacteria have been investigated and it has been concluded that the MIC for aloe vera extract was 3.12 - 6.25 mg/mL, purple sage extract was 3.12 - 25 mg/mL, and for pomegranate extract was 12.5 - 25 mg/mL. Examination of the inhibitory effects of the extracts showed that, in general, Zataria multiflora extract had stronger antibacterial properties than purple sage and pomegranate extracts, and Pectobacterium showed more sensitivity to Pseudomonas. Fractional inhibitory concentration (FIC) study showed that in the studied bacteria, the combined use of purple sage extract and pomegranate extract had better results than other combined extracts (35). In the present study, S. officinalis had better results than G. glabra.

The results of current study showed that anti-H. pylori activity was related to licorice ethanolic extract. According to the findings of this study, investigating the effect of diet on patients with H. pylori infection is important.

Copyright © 2021, International Journal of Infection. This is an open-access article distributed under the terms of the Creative Commons Attribution-NonCommercial 4.0 International License (http://creativecommons.org/licenses/by-nc/4.0/) which permits copy and redistribute the material just in noncommercial usages, provided the original work is properly cited.
download pdf 3.09 MB Peer Review Comments ( 231.34 KB) Get Permission (article level) Import into EndNote Import into BibTex
Number of Comments: 0