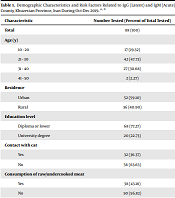 Following serological assays, 38.63% (34/88) and 2.27% (2/88) serum samples were positive for IgG and IgM antibodies, respectively. Also, a statistically significant association was observed between IgG seroprevalence and drinking of unpurified water (P = 0.015).

The serological evidence revealed that pregnant women of southwest Iran had moderate exposure to T. gondii parasite. Since the risk of acquiring acute toxoplasmosis in pregnant women is clinically important, we highly recommend regular screening tests for T. gondii infection during pregnancy period.

Toxoplasmosis, caused by a well-known intracellular parasite known as Toxoplasma gondii, is considered as one of the main infectious agents during pregnancy (1-4). Cats (Family: Felidae) serve as definitive host (1). The infection is chiefly transmitted through consumption of raw/unwashed vegetables or fruits, ingestion of raw/undercooked meat contaminated with tissue cysts, drinking water contaminated with mature oocysts, vertically from mother to the fetus, and scarcely by blood transfusion and organ transplantation (5-8).

In general, in immunocompetent persons, T. gondii infection is predominantly asymptomatic, while in immunocompromised individuals can cause life-threatening outcomes with poor prognosis (6, 9). Besides, seronegative pregnant mothers are other risk groups for acquiring T. gondii infection (5, 10). Over one-third of the human population are latently seropositive for the parasite worldwide (6, 10, 11). For instance, according to a review study by Pappas et al., the seroprevalence rate of T. gondii infection among pregnant women and those of childbearing age was reported 25.3 - 75.2%, 6.1 - 77.5%, 0.8 - 63.9%, and 8.2 - 63.2% in the Africa, Americas, Asia, and Europe continents, respectively (12). Acute T. gondii infection during pregnancy is oftentimes asymptomatic or may manifest as flu-like signs with fatigue, mild fever, and/or lymphadenopathy. Without prenatal screening programs in a specific region, acute toxoplasmosis in pregnant women will remain overlooked and left untreated (5, 13).

This cross-sectional study was performed on 88 pregnant women from Khorramshahr county, Khuzestan province (Southwest Iran). The participants were selected from patients referred to Valiasr hospital from October to December 2019. Following receiving the approval from the Ethical Committee (IR.BHN.REC.1399.007), all pregnant women voluntarily consented to be tested for the specific antibodies (immunoglobulin G (IgG)/immunoglobulin M (IgM)) of T. gondii infection. The inclusion criteria were pregnant women aged 13 - 45 years; T. gondii infection confirmed by both clinical (by an expert physician) and laboratory (positive pregnancy tests) tests, and giving a written informed consent.

In order to detect specific IgG and IgM antibodies against T. gondii infection, 5 mL of venous blood was gathered from each subject. As previously described (20, 24), the blood samples were centrifuged at 4000 rpm for five minutes and then stored at -20°C until tested. The IgG and IgM antibodies were detected via a commercially enzyme-linked immunosorbent assay (ELISA) kit based on the manufacturer's instructions.

Each subject filled out a structured questionnaire containing demographic information, including age range, source of drinking water, place of residence, consumption of raw/undercooked meat, education level, contact with cat, reason for referral to hospital, and history of abortion. This questionnaire was developed and accomplished, as earlier described (20, 24, 25).

All data were imported into the statistical package for the social sciences (SPSS) software (version 21) (SPSS Inc., Chicago, IL, USA) for more analysis. For statistical analysis, we used the Pearson chi-square and Fisher’s exact tests. The P-value less than 0.05 was defined as the significance level.

Table 1. Demographic Characteristics and Risk Factors Related to IgG (Latent) and IgM (Acute) Seroprevalence of Toxoplasma gondii in Pregnant Women in Khorramshahr County, Khuzestan Province, Iran During Oct-Dec 2019 a, b

b P-value < 0.05 indicates a significant difference in seroprevalence between the categories within each characteristic.

Acute toxoplasmosis in pregnant women can cause congenital toxoplasmosis. The infection may result in severe and progressive disease with high morbidity and mortality in fetuses and newborns (2, 3, 5). Based on published reports, congenital toxoplasmosis is responsible for approximately 1.2 million disability-adjusted life years (DALYs) annually (5, 13). According to Torgerson & Mastroiacovo (2013) (13), approximately 190,100 cases (179,300-206,300) with congenital toxoplasmosis happen each year worldwide. Moreover, the authors declared that South America along with some Middle Eastern and low-income countries, had the highest burden for congenital toxoplasmosis (13). In two separate meta-analysis papers with a global perspective, the seroprevalence rate of latent and acute toxoplasmosis during pregnancy was calculated as 33.8% and 1.1%, respectively (5, 10). In a meta-analysis published by Foroutan-Rad et al. (26), the pooled seroprevalence rate of T. gondii infection among Iranian pregnant women from 1990 to 2015 was reviewed. Based on the results, IgG and IgM antibodies were estimated at 38% and 4%, respectively, and the pooled seroprevalence was 41%. Furthermore, the seropositivity for T. gondii infection ranged from 26.6% to 77.2%, with more endemicity in Mazandaran province in northern Iran. The authors highlighted the importance of increasing knowledge about the main transmission routes of T. gondii infection among pregnant women and performing regular screening tests by an appropriate method (26). The seroprevalence rate of pregnant women in the current study was similar to the one reported by Foroutan-Rad et al. (26), and slightly higher than the rate reported by Rostami et al. (10). It is worth mentioning that the IgG seroprevalence of pregnant women drinking unpurified water was higher than those drinking purified water (57.14% vs. 30.00%; P = 0.015). This indicates that contaminated water is considered as a potential source of transmission of T. gondii infection in this region. In our previous study (Abadan county, Khuzestan province), the same results were observed among the general population (24).

Based on our findings, the overall seroprevalence of 40.90% (36/88) to T. gondii infection was estimated during pregnancy period in Khorramshahr county. Since the risk of acquiring acute T. gondii infection in this susceptible group is clinically significant, improved prevention and control efforts should be strictly performed. Also, the regular screening programs for T. gondii infection into the routine clinical care for pregnant women can be helpful. Finally, increased knowledge of women regarding T. gondii infection and its consequences, the main transmission routes, including source of drinking water, and the related risk factors could reduce the seroprevalence rate, especially in rural communities.

The authors sincerely appreciate all personnel of Valiasr hospital in Khorramshahr for their kind cooperation. We are very grateful to Mrs. Fatemeh Maghsoudi (Abadan University of Medical Sciences, Abadan, Iran) for her helpful consultation and comments on the manuscript.

Copyright © 2021, International Journal of Infection. This is an open-access article distributed under the terms of the Creative Commons Attribution-NonCommercial 4.0 International License (http://creativecommons.org/licenses/by-nc/4.0/) which permits copy and redistribute the material just in noncommercial usages, provided the original work is properly cited.
download pdf 99.78 KB Get Permission (article level) Import into EndNote Import into BibTex
Number of Comments: 0