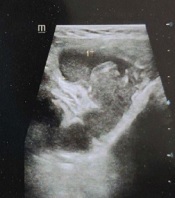 Breast Tuberculosis is relatively uncommon in the modern era. However, it is necessary to understand how to manage this disease since most patients require medical management, despite presenting as a lump.

Both patients were young females presented with lump breasts. Bilateral breast ultrasound with axilla was suggestive of infective aetiology. Fine needle aspiration cytology (FNAC) revealed ZN stain positive acid-fast bacilli. Both patients were started on anti tubercular treatment. One patient had complete resolution of the lump; however, another patient developed an abscess drained via percutaneous aspiration. Subsequently, the dissolution of the lump was observed.

The diagnosis of breast tuberculosis is challenging and involves constant vigilance, detailed clinical history, examination, and supporting investigations, including chest X-ray, breast ultrasound with axilla, CT thorax, FNAC, and blood investigations such as erythrocyte sedimentation rate and Mantoux test. After diagnosis, treatment with antitubercular drugs should be started and regularly followed up. Inappropriate diagnosis and treatment can result in complications such as the non-resolution of lump and/or abscess.

Breast Tuberculosis is relatively uncommon in the modern era. However, it is necessary to understand how to manage this disease since most patients require medical management, despite presenting as a lump. The TB of the chest wall constitutes 1 - 5% of extrapulmonary tuberculosis (1-3). The incidence of the breast TB accounts for 0.1% of all breast lesions in developed countries, compared to 0.3 - 0.5% in developing countries (1, 3). Studies have documented that TB contributes to 0.64 - 3.59% of all breast-related conditions.

Breast TB can be primary or secondary. Primary breast TB has no source of infection elsewhere in the body. It reaches the breast through a direct or hematogenous route. Secondary breast TB spreads from cervical, intramammary, intercostal, or ruptured intramammary lymph nodes (2-4).

A 12-year-old female presented with a lump in her right breast for two weeks. The lump had rapidly increased from its initial size of 2 × 2 cm to 6 × 7 cm over the past week. The swelling was not associated with pain, discharge, skin changes, or nipple retraction (Figure 1). She had no history of TB or contact with TB patients. 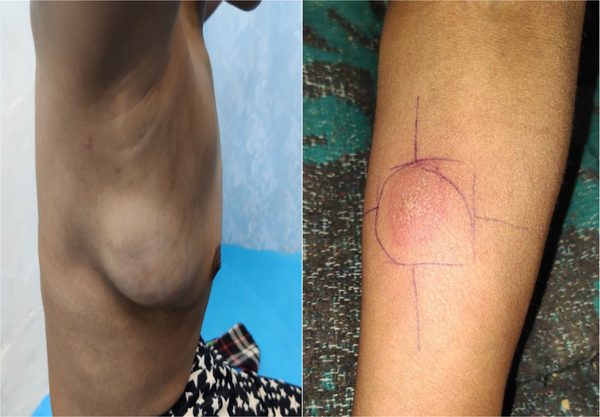 On examination, the lump was palpable in the outer quadrant of the right breast from the 9 O'clock to the12 O'clock position. It was 6 × 7 cm in size, measured using a vernier calliper in a sitting position. There was no redness, scar mark, sinus, fistula, peau d’ orange, or nipple retraction. There was no tenderness on palpation and no palpable axillary lymph node.

The patient was assessed with a triple assessment to confirm the diagnosis. Bilateral breast USG along with axillary lymph nodes was done, revealing a large mass with near-complete necrotic content in the right superolateral chest wall extending medially to the right retroareolar region, with the size of 6.7 × 6.4 × 3.8 cm (87 cc). Multiple hypoechoic right axillary and right supraclavicular nodes were present, and the findings were suggestive of infective etiology like tuberculosis (Figure 2). 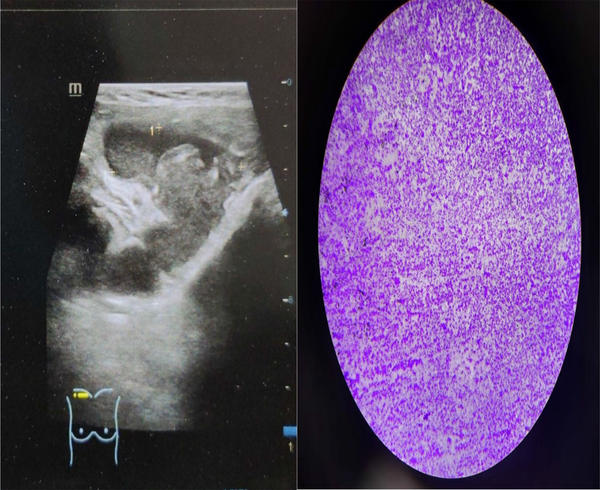 The patient was started on anti tubercular treatment. Two weeks after starting ATT, the patient had developed redness over the swelling. Swelling had become more fluctuant; however, there was no tenderness or rise in temperature. The anti-gravity aspiration of swelling was done, and 15ml of purulent fluid was drained. Mycobacterium tuberculosis belongs to acid-fast bacillus group which usually retain the dye after ziehl neelsen staining.

A 15-year-old female presented with a lump in her breast for the last one year. It was insidious and gradually progressive in onset. Initially, it was 2 × 3 cm in size and had progressed to a size of 7 × 9 cm. Swelling was associated with no pain, discharge, skin changes, or nipple retraction. There was no history of TB or contact with TB patients.

On examination, the lump was palpable in the upper inner quadrant of the left breast from the 9 O'clock to the 12 O'clock position. It was 7 × 9 cm in size, measured using a vernier calliper in a sitting position. There was no redness, scar mark, sinus, fistula, peau d’ orange, or nipple retraction. There was no tenderness on palpation and no palpable axillary lymph node.

The patient was assessed with a triple assessment to confirm the diagnosis. Bilateral breast USG with axilla was done, revealing a large mass along with enlarged axillary lymph nodes, which were probably due to infective aetiology. Following USG, fine needle aspiration cytology (FNAC) was done, which showed caseous necrosis. ZN staining also revealed acid-fast bacilli, which was suggestive of TB.

The patient was started on category I anti tubercular treatment. The patient experienced the complete resolution of the lump after six months of therapy.

Breast TB requires the surgeon’s constant vigilance to be diagnosed since it can mimic other conditions such as a pyogenic abscess or breast carcinoma. Accordingly, diagnostic delays in diagnosing breast TB are hence common. Sir Astley Cooper (1829) first described breast TB as a "scrofulous swelling of the bosom of young women." (5, 6). Studies in 1903 mentioned difficulties in differentiating breast TB from the above-mentioned conditions. It is fascinating to consider how breast TB has continued to be a diagnostic dilemma even a century later. Even once the diagnosis is reached, the management of the disease is primarily medical. Accordingly, It is necessary for a surgeon to have aptitude of a physician while treating conditions like this (7).

Mammography is not preferred in younger women owing to denser breasts with more glandular tissue and exposure to radiation. Ultrasound features observed in breast TB are abscess, TB mastitis along with lymphadenitis, isolated TB lymphadenitis, and nodularform, respectively (6).

When the features suggest infection, fine needle aspiration cytology (FNAC) or Histopathological assessment with Core needle biopsy (preferably Ultrasound-guided) can be used. The sensitivity of FNAC is highly low compared to histopathology (28% vs. 94%). FNAC may demonstrate necrosis, and AFB staining can be done on the sample. Histopathology can detect necrotizing granulomatous inflammation. However, if the sample is pauci bacillary, then detection sensitivity must be increased by adding nucleic acid amplification tests or culture (7, 8)

Blood Investigations such as haemoglobin levels and ESR play a supporting role as far as the diagnosis is concerned. TB patients can develop anaemia of chronic disease, leading to a fall in haemoglobin levels. Chronic inflammation can raise the ESR levels. However, these levels are nonspecific and are not diagnostic of TB. They may help in equivocal FNAC or HPE findings, where the Index of clinical suspicion is high (5, 6).

Mantoux tests also play a supplementary role since the development of induration after the inoculation of antigen neither confirms nor rules out TB. False-negative results are common in immunocompromised individuals due to decreased immune response. The chest X-ray help in diagnosing primary pulmonary TB. There can be opacities, especially in the upper lobar area, due to fibrosis. CT scan has a role in the advanced cases of breast TB to assess chest wall involvement (7).

Drug therapy in the TB guidelines and protocols is specific to countries and regions. In India, newly diagnosed patients are treated with a combination of multiple drugs to counteract existing drug resistance and prevent the further development of new resistance. Drugs included in the regimen are isoniazid (H), rifampicin (R), pyrazinamide (Z), and ethambutol (E). An initial intensive phase lasts for eight weeks (containing H, R, Z, and E), followed by a continuation phase lasting for 16 weeks (containing H, R, and E) (9). Treatment can be extended or modified based on the patient’s response to treatment and the presence of multidrug resistance. Multi-drug-resistant bacilli are resistant to both rifampicin and isoniazid. Multi-drug-resistant tuberculosis and patient who drop out of therapy (defaulter) require prolonged administration of anti-tubercular drugs. Delay in medical treatment can lead to complications such as abscesses or sinus formation. Cold abscesses should be drained carefully in an antigravity manner to prevent the formation of a fistula (5).

Treating surgeons’ patience and clinical acumen are critical in diagnosing a patient with breast TB before developing any complication. One hundred years have passed since the first description of the disease. However, no minimally invasive test can diagnose or exclude the disease with acceptable sensitivity. Accordingly, it is of paramount importance to have a battery of clinical examinations and radiological investigations to support pathologists. Even once the diagnosis is made, the patient should be counseled regarding the prolonged duration of medication to ensure regular follow-up and resort to surgical management if required. The management of breast tuberculosis requires patience and constant vigilance from patient as well as the surgeon.

Copyright © 2022, Author(s). This is an open-access article distributed under the terms of the Creative Commons Attribution-NonCommercial 4.0 International License (http://creativecommons.org/licenses/by-nc/4.0/) which permits copy and redistribute the material just in noncommercial usages, provided the original work is properly cited.
download pdf 10.59 MB Get Permission (article level) Import into EndNote Import into BibTex
Number of Comments: 0