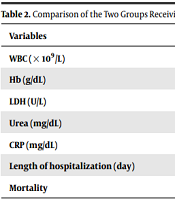 Effects of Interferon β1-a Administration in the First Versus Second Week of Treatment on Recovery in Patients with COVID-19: A Retrospective Study

COVID-19, an acute respiratory disease caused and transmitted by SARS-COV-2 virus, has turned into a major global concern since 2019. In severe cases, the elevated levels of immune cells cause inappropriate responses. To date, no medications have been approved for COVID-19.

The present retrospective cohort study was designed and conducted in Shahid Mohammadi Hospital, Bandar Abbas, Iran, in 2020. Eligible patients with confirmed COVID-19 based on PCR test were included (n = 200) and allocated to two groups to receive interferon β1-a (IFNβ1-a) either in the first or in the second week of treatment (IFN week 1 and IFN week 2 groups, respectively). The primary objective of this study was to compare the effectiveness of IFNβ1-a administration in the first and the second week of treatment on patient mortality. The secondary objective was to investigate the difference between the two groups in terms of laboratory data and length of hospitalization. The data were analyzed using Chi-square and Fisher’s exact tests.

The study population was divided into two equal groups. IFNw1 group received IFNβ1-a in the first week and IFNw2 group in the second week of treatment. The two groups matched in terms of baseline demographic data. The mortality rate was significantly lower in the IFNw1 group (13% vs. 18%; P-value = 0.01). At discharge, C-reactive protein (CRP) was clearly reduced in the IFNw1 group compared to the IFNw2 group (15 ± 12 vs. 24 ± 16; P-value = 0.02), but other lab variables did not show a significant difference between the two groups.

There was a relationship between IFNβ1-a administration time and the trend of recovery in patients with moderate COVID-19. Administration of IFNβ1-a in the first days of treatment can reduce inflammatory factors and mortality rates in these patients.

A disease called COVID-19 broke out in Wuhan, China, in December 2019 and rapidly spread to other parts of China and the whole world. On February 12 2020, the World Health Organization (WHO) officially coined the term COVID-19 for the disease caused by the novel coronavirus (1).

Due to its high prevalence, complications, and mortality rate (2), COVID-19 and its control and treatment methods have received increasing attention throughout the world. The entry receptor for COVID-19, called angiotensin-converting enzyme 2 (ACE2) receptor, is found in many different tissues, including the lungs, the heart, and the liver, making the virus extremely harmful (3). Since some viruses, e.g., coronavirus, poorly stimulate interferon synthesis, the body’s natural defense mechanism against such infections is poorly activated. Based on the results of in vitro and in vivo experiments, interferon can strongly prevent cell proliferation, and therefore, interferon therapy is an alternative recommended for infections with coronaviruses (4). Given the effects of interferon on cells (interferon-alpha on all cells and interferon-gamma on epithelial and certain immune cells), its early administration can efficiently inhibit the spread of SARS-CoV-2 virus (5). The delayed increase in interferon level in SARS-CoV-2 infection strongly activates macrophages (5). Postmortem examination revealed extremely high levels of pro-inflammatory macrophages in those who died of COVID-19 (6).

Type I interferons (IFN-α, IFN-β, IFN-ε, IFN-κ, IFN-ω in humans) bind to the type I interferon receptor (IFNAR) in an autocrine and paracrine manner. These receptors are found everywhere in the body. This pathway activates a powerful antiviral defense program of hundreds of interferon-stimulated genes (ISGs), which have the capacity to interfere with every step of viral replication (7).

Interestingly, although rapid production of interferon at the onset of the disease is an important factor for increasing T cells, increased interferon in later stages inhibits T cells or deplete their lymphoid tissues. Given the role of T cells in regulating the immune system function and the severe lung damage caused by cytokine release syndrome (CRS) in patients critically ill with COVID-19, the immune suppression dysfunction appears possible at this stage (6).

The present single-center retrospective cohort study was conducted using the data extracted from the hospital information system (HIS) and archived patient records. The study protocol was approved by the Ethics Committee of Hormozgan University of Medical Sciences, Iran (code: IR.HUMS.REC.1399.479).

The present study was conducted in Bandar Abbas (a city in Iran). A total of 200 patients admitted to Shahid Mohammadi Hospital were enrolled. All eligible patients who aged 18 - 90 years entered the study from early 2020. They all underwent the treatment regimen approved by the WHO for patients with moderate COVID-19. Demographic data are shown in Table 1, baseline data were similar in the two groups. The participants were divided into two equal groups. In addition to the routine care, the first group (IFNw1) received IFNβ1-a in the first week of treatment and the second group (IFNw2) received IFNβ1-a in the second week of treatment. The medication used for these patients was interferon β1-a (ReciGen®) administered in 44 µg doses (total 12 million units). It was administered every other day for five days.

a P-value > 0.05 was considered significant.

Routine pharmacotherapy according to the National Committee of COVID-19 treatment protocols included: (1) hydroxychloroquine/chloroquine phosphate: hydroxychloroquine sulfate tablets 200 mg or chloroquine phosphate tablets 250 mg (equivalent to 150 mg base amount); two tablets every 12 hours on the first day and then one tablet every 12 hours for at least 7 days and up to 14 days; (2) one of the following medications at the discretion of the treating physician: Kaletra tablets (lopinavir/ritonavir) 200/50 mg; 2 tablets every 12 hours after meals for at least seven days and up to 14 days; (3) Atazanavir/Ritonavir 300/100 tablet: one tablet a day with food; or Atazanavir 400 mg daily for a minimum of seven days and a maximum of 14 days.

All patients were followed-up until discharge, and the mortality rate and laboratory data over this period were extracted from the HIS. Patients visiting the Center for Acute Respiratory Diseases of Shahid Mohammadi Hospital were screened for COVID-19 and enrolled if COVID-19 was confirmed based on clinical signs, a positive PCR test, and spiral chest CT-scan.

The primary objective of this study was to compare the effectiveness of IFNβ1-a administration in the first and second weeks of treatment on patient mortality. The secondary objective was to investigate the difference between IFN week 1 and IFN week 2 groups in terms of white blood cell (WBC), hemoglobin (Hb), urea, lactate dehydrogenase (LDH), and C-reactive protein (CRP) levels and length of hospitalization.

Data were analyzed using IBM SPSS 26 (SPSS Inc., Chicago, IL, USA). Frequency and Crosstab commands were applied to assess the frequency of qualitative data. Chi-square and Fisher’s exact tests were conducted to examine the relationship between two categorical variables. Independent sample t-test was used to compare the mean of two independent groups. The results were reported in binary form. P-values less than 0.05 were considered significant. Kolmogorov-Smirnov test was used to examine the normal distribution of data.

Patients were divided into two groups of 100 depending on whether they received IFNβ1-a in the first week or the second week of the onset of COVID-19 symptoms. The two groups had no significant differences in terms of age (P = 0.12) or sex (P = 0.17). Overall, 58 patients in the IFNw1 group (58.00%) and 62 patients in the IFNw2 group (62.00%) were male (Table 1). No significant difference was observed between the two groups in terms of baseline data (Table 1). All patients had a moderate COVID-19. Laboratory results pertain to the day of discharge.

Table 2. Comparison of the Two Groups Receiving IFNβ1-a in the First and Second Weeks of Treatment a

b P-value > 0.05 was considered significant.

The present retrospective study was conducted in Shahid Mohammadi Hospital (Bandar Abbas, Iran) with the aim to investigate the effects of timing of interferon β1-a administration on the treatment response of adult inpatients with moderate COVID-19. Thus, the relationship between the patients’ treatment process and the administration of IFNβ1-a in the first or second week of treatment was assessed. To this end, laboratory markers such as LDH, CRP, and WBC, as well as mortality rate, were assessed in both groups (Table 2). The results of statistical analysis showed a significantly lower mortality rate in the group that received interferon in the first week of treatment compared to the group that received IFNβ1-a in the second week (13% vs. 18%; P-value = 0.01). Among laboratory markers, CRP was significantly lower in the IFNw1 group than in the IFNw2 group (15.04 ± 12.01 vs. 24.01 ± 16.03; P-value = 0.021). However, no significant difference was found between the two groups in other laboratory markers and length of hospitalization.

During the COVID-19 pandemic, the effects of IFNβ1-a, especially its administration time, were less evaluated compared to other medications. Meanwhile, in most cases, our findings appear to be in line with previous studies on this subject, confirming the relationship between the timing of IFNβ1-a administration and patient recovery. A retrospective study reported a lower mortality rate in patients who received IFNβ1-a earlier. It also showed earlier hospital discharge in the interferon group than in other groups (8). Another study assessed the effects of ribavirin and interferon and reported significantly lower mortality rates with the administration of these medications. A clinical trial on interferon showed that it could reduce the length of hospitalization and, to some extent, mortality rate in patients (7). In this study, data for CT-Scan were not complete for all the population. So we could not use these data. Laboratory studies indicated a significant decline in the level of T cells, especially T-helper cells, which was even higher in critically ill patients (9). This effect can be justified by the role of interferon in T cell recovery.

Moreover, another study on laboratory markers showed that early administration of type I interferon protected patients with MERS-COV, while its late administration increased mortality due to the high activation of neutrophils and the elevated secretion of pro-inflammatory cytokines (10).

A study argued that interferon might induce ACE2, which is the SARS-CoV-2 receptor. This hypothesis was rejected by later research, and it was found that interferon does not promote the virus entry into the cells (11). In contrast, nonsteroidal anti-inflammatory drugs (NSAIDs) were found effective in this regard (12).

According to previous research, lymphocytes, especially T lymphocytes, have a major role in viral infections. A study conducted on mice in China showed that CD8+ T lymphocytes had a central role in clearing the virus and dealing with the eosinophilic immunopathology in mice with SARS-CoV (7). Improper response of T lymphocytes can be due to the lack of interferon at the onset of the disease caused by the antagonistic function of the virus on this molecule (6). Our findings and the results of previous studies complement and support one another.

The limitations of this study included failure to control disease symptoms and failure to perform allocation concealment and randomization due to the retrospective nature of the study. The study population was statistically proportionate. Given the urgent need for information and evidence of the medication effects during the COVID-19 pandemic, the present study was conducted retrospectively. However, further studies and accurate clinical trials are required to confirm the obtained results.

There is a relationship between the timing of IFNβ1-a administration and the trend of recovery in patients with moderate COVID-19. Administration of interferon β1-a in the first days of treatment would reduce the inflammatory factors and mortality rates in these patients.

Copyright © 2022, International Journal of Infection. This is an open-access article distributed under the terms of the Creative Commons Attribution-NonCommercial 4.0 International License (http://creativecommons.org/licenses/by-nc/4.0/) which permits copy and redistribute the material just in noncommercial usages, provided the original work is properly cited.
download pdf 146.71 KB Get Permission (article level) Import into EndNote Import into BibTex
Number of Comments: 0