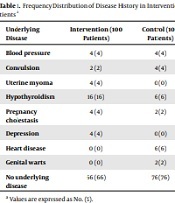 Comparison of Cesarean Surgical Site Infection in Patients Treated with Cefazolin and Cefazolin-Azithromycin Regimes: A Quasi-experimental Study in a Developing Country

The present study aimed to compare the effects of conventional prophylaxis with cefazolin with a combination of cefazolin and azithromycin in reducing wound infection.

Cesarean section is one of the standard procedures in gynecological centers and hospitals prone to deadly infections due to surgical incisions. These infections are primarily bacterial in origin from the normal flora of the skin and bacteria in the vagina (1). Cesarean section has increased over the past three decades and has reached more than 25% in some countries (2). About one in three women in the United States undergoes a cesarean section. Infectious complications following cesarean section include fever, wound infection, endometritis, urinary tract infection, and some serious complications such as pelvic abscess, septic shock, necrotizing fasciitis, and infectious pelvic venous thrombophlebitis. Furthermore, without prophylactic antibiotics, the incidence of endometritis is between 20 - 45%, and the rate of wound infection and severe infectious complications is more than 25% (3, 4).

It has been shown that the risk of infection in women who undergo cesarean section is 5 - 20 times higher than women who have a vaginal delivery and that infectious complications after cesarean section are significant causes of morbidity and hospitalization, and treatment costs (7-9). Furthermore, the rate of infection in overweight women has been reported to increase even by up to 30% (10). Therefore, given the prevalence of wound complications, mainly due to the increasing prevalence of obesity, identifying strategies to reduce wounds' infectious and non-infectious complications is of particular importance (11).

Due to the lack of sufficient information on the effect of prophylactic antibiotic regimen and since in Iran there is no complete information about antibiotic resistance and response to preventive treatment of postpartum infection, this study aimed to compare the incidence of cesarean section infection in patients treated with cefazolin alone and patients treated with cefazolin and azithromycin.

In this quasi-experimental study, 200 pregnant women who were candidates for cesarean section admitted to Ali Ibn Abi Taleb Hospital in Zahedan, Iran, during 2019 and 2020 were investigated. The study was approved by the Ethics Committee of Zahedan University of Medical Sciences. Patients were randomly divided into two groups under prophylactic treatment with cefazolin and cefazolin, and azithromycin, and the incidence of infection was compared with other variables. According to the study of Jyothi et al. in 2019 (17), 85 people were selected for each group, which increased to 200 people (100 people in each group) due to the possibility of patients declining. Also, a convenience sampling method was used to assign individuals included in the two groups.

In addition, the objectives of the study were explained to the participants, and written informed consent was obtained from the participants. The individuals in the sample were assured that the information in their questionnaire would be kept confidential and reminded that the research results would be made available to them if they wished. They were also reassured that they could leave the research at any stage of the study if they did not want to continue.

On even days of the week, patients were given the cefazolin regimen (single dose of 2 g intravenously half an hour before cesarean section). On odd days of the week, they have given the cefazolin regimen (single dose of two g intravenously half an hour before cesarean section) plus azithromycin (500 mg orally half an hour before cesarean section). The surgical method and the surgical wound healing method were performed equally for both groups, and patients were followed up for six weeks after surgery. For patients who were unable to visit for a 6-week follow-up, they were contacted by telephone to evaluate the results. Required information for the research, which was collected through interviews and examinations of patients by the project manager, included items such as age, gestational age, underlying disease in patients in both groups, criteria for surgical site infection were fever (BT > 38.9), erythema (redness of the wound), warm wound site, serous discharge from the wound, purulent discharge from the injury and non-infectious complications of the damage based on clinical examination and diagnosis up to 42 days after delivery (seroma, hematoma, cellulite, wound opening, and dehiscence). It should be noted that infections such as endometritis were in fever, abdominal pain, infectious vaginal discharge with positive discharge culture up to six weeks after delivery.

The data were entered into SPSS statistical software version 20, and descriptive statistics were used to describe the percentage of frequency, frequency, mean, and standard deviation. The normal distribution of quantitative data was investigated using Kolmogorov-Smirnov test. The t-test was also used for independent groups to compare quantitative variables. Qualitative data were compared between the two groups using chi-square or Fisher's exact test, and P-value of less than 0.05 was considered statistically significant.

Table 1. Frequency Distribution of Disease History in Intervention and Control Patients a

Table 2. Frequency Distribution of Causes of Cesarean Section in Patients in the Intervention and Control Groups a

Table 3. Frequency Distribution of Non-infectious Wound Complications in Patients in Intervention and Control Groups a

Table 4. Frequency Distribution of Wound Infection in Patients in Intervention and Control Groups a

Maternal mortality and complications from cesarean section may be due to some infections, including surgical site infections, endometritis, and urinary tract infections, as well as rarely pelvic abscess, pelvic septic phlebitis, and pneumonia (17). Hospitals now use a single dose of cefazolin as prophylaxis for cesarean sections in many countries, as most international bodies recommendations. However, in several low-resource countries, such as India, other antibiotics are used freely and irrationally due to higher infection prevalence (21). Therefore, the present study aimed to compare the effect of prophylactic administration of cefazolin with azithromycin on cesarean section infection compared to the group receiving cefazolin alone.

According to the results of our study, among the underlying diseases in the intervention and control groups, hypothyroidism and heart disease were significantly different between the two groups; however, both cases were higher in the control group. They did not appear to play a role in postoperative infection. However, this is one of the limitations of the present study. Nevertheless, there was no difference in the underlying diseases (17, 22). Also, in investigating the causes of cesarean section, it was found that fetal distress, lack of response to induction, and arrest of dilatation were statistically significant differences between the two groups. All were higher in the intervention group. Although these factors can increase the chances of wound infection, adding azithromycin to cefazolin reduced the likelihood of wound infection in the intervention group.

In a study, Navali et al. reported the post-cesarean wound infection of 4.7% in those who received cefazolin alone. In contrast, no patient in the group receiving cefazolin with azithromycin had such an infection. Finally, according to the results of their study, compared to cefazolin alone, a combination of azithromycin and cefazolin was not significantly different in preventing post-cesarean incisional wound infection. Nonetheless, owing to this practical clinical consequence, using a combination of these two antibiotics instead of cefazolin alone was recommended (16). In a study comparing the use of cefazolin with and without azithromycin in cesarean section, Jyothi et al. reported that there was a significant reduction in the incidence of surgical site infections (15% vs. 3%), endometritis (8% vs. 2%), and postoperative fever (17% vs. 3%). Also, the duration of hospital stay was almost two days lesser for the cefazolin plus azithromycin group (17).

In another review by Farmer et al. on five studies, it was reported that adding azithromycin to a pre-cesarean antibiotic prophylaxis regimen could significantly reduce the risk of infection after cesarean section and endometritis. There was a significant difference between the two groups in terms of antibiotic regimen with and without azithromycin in the incidence of wound infection; the results of this study were consistent with our study (23).

Previously, the use of a narrow-spectrum antibiotic such as cefazolin was recommended in patients undergoing cesarean section; today, this broad-spectrum coverage has been shown to significantly reduce the incidence of post-cesarean infection with many US gynecological clinics using broad-spectrum antibiotics (24). Meanwhile, azithromycin and adding cefazolin have been the preferred choice of specialists, mainly due to the appropriate coverage of mycoplasma and ureaplasma by azithromycin, responsible for most post-cesarean infections such as endometritis and wound infections (1, 25). In particular, when ureaplasma is detected in amniotic fluid during cesarean section, it is associated with at least a threefold increase in the risk of subsequent endometritis, which is one of the most commonly known bacteria in wound infections (26-28). Since ureaplasma infections may be atypical and have a mild inflammatory response, they may be clinically known as non-infectious complications (29, 30). In the study by Tita it was stated that adding azithromycin to the conventional prophylaxis regimen in non-elective cesarean section women reduced the risk of non-infectious wound complications after cesarean section (31). Also, studies by Meyer et al. (32) and Pitt (33) showed that only adding antibiotic agents of different classes (such as azithromycin -metronidazole and gentamicin) to the standard regimen (such as cephalosporins) could lead to a significant difference in the course of post-cesarean infection.

In general, according to our study and various studies, both single-drug and two-drug regimens, as mentioned, can effectively control post-cesarean infection, and the only difference is in the effectiveness of the two methods. Therefore, conducting more extensive studies with larger sample sizes can effectively evaluate the simultaneous effects of prophylactic antibiotics with azithromycin.

According to the findings of this study, the difference between the two groups receiving cefazolin and cefazolin with azithromycin was significant in terms of the incidence of cesarean section infection, and a combined method is recommended for a more favorable effect without specific complications.

The authors would like to thank the patients participating in the study. The objectives of the study were explained to the participants, and written informed consent was obtained from the participants.

Copyright © 2022, International Journal of Infection. This is an open-access article distributed under the terms of the Creative Commons Attribution-NonCommercial 4.0 International License (http://creativecommons.org/licenses/by-nc/4.0/) which permits copy and redistribute the material just in noncommercial usages, provided the original work is properly cited.
download pdf 112.43 KB Get Permission (article level) Import into EndNote Import into BibTex
Number of Comments: 0