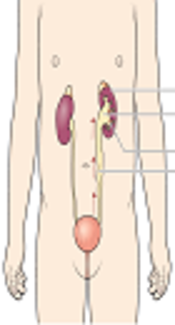 The Relationship Between Vesicoureteral Reflux and Recurrent Urinary Tract Infection in Children in Kurdistan Region, Iraq

Recurrent urinary tract Infection (UTI) is a common problem in pediatric age group. Vesicoureteral reflux (VUR) is a common cause for recurrent UTI.

This study was conducted to determine the prevalence of VUR in children who presented with recurrent UTIs and to assess the effect of endoscopic treatment in patients with grade III-V VUR.

This was a prospective study recruiting 1232 patients who presented with recurrent UTI during April 2008 and January 2012. We used voiding cystourethrogram to diagnose VUR, and treated grades III-V VUR by bulking agent. One to 2 sessions were performed and the participants were followed-up postoperatively at first, second, third, and 12th months postoperatively.

VUR was common in children with recurrent UTI with a good prognosis after endoscopic correction. Further study is needed to follow-up the participants who did not respond to treatment.

Urinary tract infection is one of the most common infections in pediatric age group and particularly in infants (1). The first attack of infection occurs in the first year of life and can cause permanent parenchymal scarring in young vulnerable growing kidneys (1, 2). Recurrent infections in such an age group is believed to correlate with the risk of developing permanent kidney damage that may predispose to serious sequelae later in life, such as hypertension and end-stage renal disease (2, 3). Therefore, UTIs require accurate management and careful follow-up (1-3). Vesicoureteral reflux is the most common congenital abnormalities found in children with recurrent UTI (3, 4). Previous studies have found that radiological abnormalities can exist in 25% to 55% of children after their first attack of UTI (5, 6). To prevent VUR related sequels, participants can be treated by continuous antibiotic prophylaxis, surgical intervention by ureteric reimplantation, or endoscopic treatment by injecting bulking agents (7). Continuous antibiotic prophylaxis might be associated with increased levels of resistance (8) and antibiotics-related side effects. Therefore, many studies have recommended surgical intervention and particularly endoscopic treatment as the first line of management (9-15).

The aims of this study were to determine the prevalence of VUR in children who presented with recurrent UTIs and to assess the effect of endoscopic treatment in patients with grade III-V VUR.

This study was conducted in Heevi pediatric hospital in Duhok city, northern Iraq, during April 2008 and January 2012. During the study, 1232 cases with recurrent UTI were referred to Heevi pediatric hospital. We used voiding cystourethrogram to diagnose VUR. A subureteral transurethral injection or hydrodistention implantation technique was used to inject Deflux to the refluxing ureter. The procedure was performed under general anesthesia in the department of surgery at Heevi hospital, and all patients were discharged on the same day of operation. During the cystoscopy, the bladder, urethra, and ureteric orifices were evaluated and any abnormality was recorded. One to 2 sessions were performed, depending on the success of the endoscopic treatment (ET). Then, the participants were followed-up postoperatively at the first and second months with clinical evaluation, general urine examination, and urine for culture and sensitivity to exclude UTI. Voiding cystourethrography was conducted in all patients to assess the response three months after operation. Participants who did not respond were scheduled for another session while those who responded to ET were evaluated after 1 year for the recurrence of reflux and frequency of UTI occurrence.

Written consent was recorded from guardians on behalf of the participants involved in the study. This study and method of attaining consent were approved by ethics committee of the University of Duhok, College of Medicine, Kurdistan Region, Iraq.

VUR was found in 437 (35.5%) of the patients. Among them, 197 (16%) patients were diagnosed with VUR grade I and II. Additionally, 240 (19.5%) cases were diagnosed with VUR III-V. All patients with grade I and II were referred to the pediatric department for follow-up and they were excluded from the follow-up study. All patients with VUR grade III-V were managed with bulking agent and then followed-up. 134/240 (55.8%) of them were male. Among the recruited patients, 91/240 (37.9%) had bilateral VUR, making the total refluxing unit of 389.

We found 200 units of grade III reflux. Two sessions were required to correct it in all patients with grade III (Table 1). A total of 152 units were diagnosed with grade IV reflux. The success rate of correction of grade IV was 79% after the second session (Table 1). Grade V was diagnosed in 37 units and the correction success rate was 71% after the second session (Table 1). The overall VUR was corrected successfully in 203/240 (84.6%) of the patients.

Table 1. The Success Rate of VUR per Grades After First and Second Sessions

Then, the participants were followed-up postoperatively at the first and second months with clinical evaluation, general urine examination, and urine for culture and sensitivity to exclude UTI. At the third month, cystourethrography was performed for all participants. All patients were evaluated after 1 year by cystography, urine examination, and urine culture. During the follow-up period, new contralateral reflux low grade (I and II) de novo VUR was found in 28/240 (11.7%) cases. UTI only occurred in 12/203 (5.9%) of the patients after successful correction of VUR. UTI occurred in 6 patients soon after the procedure, while it occurred in 3 patients 3 months after the procedure. The rest (3 patients) were diagnosed with UTI after 12 months. All patients with UTI (after successful correction of VUR) were referred for further evaluation.

UTI is the second most common infection worldwide following respiratory tract infection (1, 4, 16). Different factors may predispose to such an infection in children including VUR, which is a common urological problem that is associated with long-term complications (1, 4, 16). In VUR, elevated bladder pressure can be transmitted to the kidney causing reflux nephropathy and scarring. In addition, urinary tract infection may predispose to new scarring even when UTI is afebrile and asymptomatic (16, 17). Early determination of the risk factor associated with renal scarring, such as UTI and/or VUR, and treating them are pivotal for the prevention of renal impairment. Several studies have reported the incidence of VUR in general population and found it to be ranging from 0.4% and 1.8% (18). In addition, the prevalence of VUR in the pediatric age group varies in different countries. Different studies in Western countries found that the prevalence of VUR ranges from 41% and up to 63% (5, 19). Interestingly, the lowest VUR prevalence was reported in Black Americans and Jamaicans, indicting racial variations (20, 21). In our study, VUR was found in 35.5% of the recruited participants. Among them, 16% of patients were diagnosed with VUR grade I and II, while 19.5% of the cases were diagnosed with VUR III-V. This is slightly higher than that reported in Turkey (19.4) and lower than that found in Kuwait (33%) (6, 18, 22, 23). All patients with grade I and II were referred to the pediatric department for follow-up and they were excluded from this study, whereas higher grades were corrected endoscopically. The overall endoscopic correction success rate was 84.6%, which was comparable to previous studies from Iraq and elsewhere (7, 24). For grade III reflux, 2 sessions were required to correct 100% of them. The success rate achieved in our study was higher than that found in Italy (25). On the other hand, 152 units were diagnosed with grade IV reflux. The success rate of correction of grade IV was 79% after the second session. This success rate was comparable with what was reported in Italy, where they report a success rate of 82% for grade IV (25). In the current study, grade V was diagnosed in 37 units and the correction success rate was 71% after the second session. It was previously thought that open-surgery should be preserved for grade V and the endoscopic correction offered the best result in grade II-IV only. However, recent data, including this study, have shown that endoscopic corrections for grade V have a higher success rate than open-surgery, with only 3.6% failure rate and 5.4% recurrence rate (26). In a previous study conducted in Iraq, de novo contralateral VUR was found in 3.8% of the patients after operation (27). Additionally, Kirsch et al. similarly reported 4.5% occurrence of contralateral VUR after the operation (28). In our study, new contralateral reflux low grade (I and II) de novo VUR was found in 11.7% cases. The exact cause for this is unknown, but it was thought to be due to elimination of pop off mechanism. UTI is a common problem in our region and is caused by multi-drug resistant microorganisms (8, 29). Such an infection can predispose to septicaesmia and renal scaring. Early diagnosis of UTI and determining its causes may help prevent deleterious complications. VUR was common in our study, and after correcting it, UTI occurred in 5.9% of the recruited participants. In a previous study conducted in Iraq and after successful correction of VUR, recurrent UTI was eliminated in all participants (27). Thus, screening for VUR should be offered to all patients presenting with recurrent UTI.

To conclude, VUR was common in children with recurrent UTI. Treating VUR carried a good prognosis and helped to prevent recurrent UTI. Further studies are needed to follow-up the participants who did not respond to treatment.

Copyright © 2018, International Journal of Infection. This is an open-access article distributed under the terms of the Creative Commons Attribution-NonCommercial 4.0 International License (http://creativecommons.org/licenses/by-nc/4.0/) which permits copy and redistribute the material just in noncommercial usages, provided the original work is properly cited
download pdf 90.75 KB Get Permission (article level) Import into EndNote Import into BibTex
Number of Comments: 0