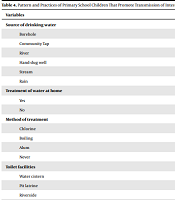 In Nigeria, intestinal parasitic infection (IPI) is one of the neglected tropical diseases of public health importance.

A total of 622 stool samples (335 males and 287 females) were collected from 13 primary schools in nine communities and analyzed using parasitological techniques (direct wet mount and formal ether concentration method). The Tukey Honest Significance Difference test (HSD) was used to determine the association and variation between prevalence and socioeconomic variables.

There was a relatively high prevalence of intestinal parasitic infection among primary school children in Sagbama local government area. Improved sanitation, safe drinking water, and set-up health education in the communities will reduce the exacerbation of the infection in the area.

Intestinal parasitic infections (IPIs) are among groups of parasitic infectious diseases that constitute a major public health problem globally, belonging to the class nematodes and protozoans (1). It is a condition in which parasites predominantly infect the gastrointestinal tract of humans, residing particularly in the intestinal wall (2). In 2012, the World Health Organization (WHO) estimated that 270 million preschool-aged children and over 600 million school-aged children lived in areas where helminths and intestinal protozoa are intensively transmitted and thus warrant interventions (3).

Intestinal parasitic infections adversely affect the nutritional status of children under five years (7). The most common intestinal parasite infections are caused by Ancylostoma lumbricoides, Trichuris trichiura, Hookworm, Strongyloides stercoralis, Enterobius vermicularis, and Toxocara species. S.stercoralis and Hookworm are transmitted directly through the skin, while the rest are transmitted through the mouth (8, 9).

Due to their vulnerability, intestinal parasites are more prevalent among primary school children in Nigeria and are the leading cause of morbidity and mortality among primary school children.. Intestinal parasitic infections have been reported to have a high prevalence among children in Nigeria because of their vulnerability (11-14). Nevertheless, information regarding their current status is limited, particularly in BAYELSA, a region of the Niger Delta in Nigeria.

The study was carried out in nine riverine communities:

All in Sagbama Local Government Area, Bayelsa State, Nigeria. Communities in this area are generally rural. Homes are built in block houses, clustered homesteads of mainly mud houses enclosed by bamboo sticks. Sagbama's climate and vegetation are consistent with that of a typical rainforest region in Southern Nigeria. The basic occupation of the inhabitants includes farming, fishing, and hunting. Some are self-employed, traders, commercial boat and vehicle drivers/transporters, and a few are public servants, civil servants, and retired civil servants. The villages are located on a coastal plain with many ponds, streams, and rivers. The state of Bayelsa experiences heavy rainfall from May to October, with the peak occurring in August. Most of these communities are affected by flooding due to the rainforest's vegetative cover. The dry season begins in November and ends in April. The average temperature in the area ranges from 25 to 34 degrees Celsius. The crops grown in these communities include sugarcane, banana, plantain, cassava, yam, beans, garden egg, fresh tomatoes, fresh pepper, cucumber, groundnut, Okro, banana, cocoyam, water yam, and vegetables which are planted and cultivated in large quantity basically for consumption and commercial purposes. Most of the inhabitants in these communities use water from the Forcados River as a local source of drinking water for waste disposal, fecal disposal, and other domestic activities. Inhabitants also use the community taps and individual boreholes as drinking water sources, which only flow at a certain period of the day. There are toilet facilities, but most people use the surrounding bushes, ponds, and streams as toilets.

The Department of Public Health, the State Ministry of Health, and the State Primary Schools Board provided ethical approval. Written informed consent was obtained from the Community Development Committee (CDC), and informed consent was obtained from the community chiefs and elders before the study. The parents, teachers, and participants were properly enlightened on the study's aims, objectives, benefits, and protocols, the need for voluntary participation, and the right to stop participation at any time.

A total of 622 stool samples were collected from primary school children between the ages of 5 - 15 years using clean 50 cm3 wide-mouthed, screw-capped universal specimen bottles. All samples were collected using structured questionnaires that asked for basic epidemiological information. This information included their ages, sexes, classes, parents' occupations, children's hygiene, histories of their contact patterns, and activities with water bodies. The specimens were labeled appropriately on the submission of stool samples and properly corked. On-the-spot macroscopic analysis of motile trophozoites was conducted using a direct technique. For examination and further analysis, the samples were placed in a cooling container and taken to the Parasitology Research Laboratory of the Department of Animal and Environmental Biology, University of Port Harcourt.

The samples were analyzed by direct wet mount and formal ether concentration method as described by Cheesbrough (15).

The prevalence of 23.95% recorded in this study is relatively high. The rate is higher than the 21.0% recorded among primary school children in Gokana and Kana Local Government Areas (LGAs) of Rivers State (16). It is, however, slightly lower than the 27.66% reported in Port Harcourt (17) and 52.0% reported in Ilie, Osun State (8). Location, sanitation, and level of awareness may contribute to this variation. All the communities sampled in Sagbama Local Government are rural, which agrees with the settings (8, 16) above, except when compared to Port Harcourt (17), an urban setting. The level of health awareness and sanitation in an urban setting is usually superior to that of a rural setting. Nevertheless, periodic dewormings, mass screenings, and awareness creation programs may be responsible for the variation observed because the provision of adequate sanitation is not always possible in resource-poor settings, particularly in rural areas.

It was determined that Ascaris lumbricoides, Entamoeba histolytica, Strongyloides stercoralis, Giardia lamblia, Hookworm, Trichuris trichiura, Schistosoma mansoni, Diphyllobothrium latum, and Fasciola hepatica were the intestinal parasites identified. At 7.88%, A. lumbricoides was the most prevalent parasite. The findings of this study are consistent with those of earlier researchers (4, 8, 18, 19), who identified A. lumbricoides as the most prevalent and important helminth.

Risk factors associated with the distribution and spread of intestinal parasites infection among school-age children showed that source of drinking water, toilet facilities, washing of hands after using the toilets, washing of hands before meals, the pattern of waste disposal, and washing of hands after waste disposal were associated with Intestinal parasitic infections. Based on the findings of Gizaw et al. (21) reaffirms WHO's position that safe and sufficient water, sanitation, and hygiene (WASH) play a key role in preventing numerous neglected tropical diseases NTDs such as intestinal parasitic infections, soil-transmitted helminths, and schistosomiasis (22). Most children in the Sagbama local government area with a river as their source of drinking water were infected with intestinal parasites. Also, a greater percentage of those that never treated their water at home were more infected than those that treated their water which further buttresses the crucial role of WASH in the reduction of transmission of intestinal parasitic infections and soil-transmitted helminths. In the same vein, people who used Riverside as their toilet facilities were more infected than those who used other facilities such as water cistern and even pit as their toilet. Furthermore, higher infection rates were observed among those who didn't wash their hands before meals compared to those who did; and among those who didn't wash their hands after waste/garbage disposal compared to those who did. These observations further lay credence to the fact that increased access to improved water, sanitation, and hygiene (WASH) infrastructure and services contributes greatly to the reduction in the STH disease burden by reducing exposure to Soil-Transmitted Helminths STH infective stages in the environment (23).

Copyright © 2022, Author(s). This is an open-access article distributed under the terms of the Creative Commons Attribution-NonCommercial 4.0 International License (http://creativecommons.org/licenses/by-nc/4.0/) which permits copy and redistribute the material just in noncommercial usages, provided the original work is properly cited.
download pdf 130.58 KB Get Permission (article level) Import into EndNote Import into BibTex
Number of Comments: 0