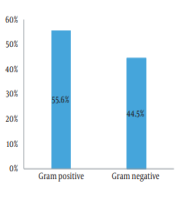 Many nosocomial infections, which cause death and cost society, may be transmitted through healthcare workers’ contacts. Preventive health measures greatly reduce their prevalence.

This study aimed to investigate the microbial contamination of healthcare workers’ hands in different wards of Sheikh Hospital. In addition, the alcohol-based hand sanitizers’ ability to reduce microbial load of nosocomial infections was evaluated.

Separation of dangerous pathogenic bacteria such as S. aureus, K. pneumoniae, and E. coli from healthcare workers may be a great warning sign for these infections in the hospital. Therefore, hand hygiene procedures may be considered an appropriate method to decrease nosocomial infections.

Nosocomial infections are one of the most important problems in health centers and can be considered one of the most common medical problems in hospitalized patients (1). In the United States, these infections are involved in the deaths of 88,000 patients each year and impose a high cost of $45 billion on society (2). A previous study by the World Health Organization (WHO) in 55 hospitals in 14 countries described that about 87% of hospitalized patients had nosocomial infections (3).

Based on existing data, the role of environmental factors, healthcare workers, and hospitalized patients in preventing nosocomial infection has been proved by endemic or epidemic studies (3). Although developed countries with sufficient facilities and financial resources suffer from 5% of nosocomial infected patients, this rate may increase to 27% in developing countries (4, 5).

These infections are transmitted not only to patients but also to anyone who comes in contact with patients, including healthcare workers and visitors. Moreover, patients discharged from the hospital may act as a carrier and transfer the organisms to the community (6).

Most hospital-acquired infections are categorized into one of five groups: surgical wound infection, pneumonia, bacteremia, catheter-associated urinary tract infection, and gastrointestinal infection (7). The wards’ incidence of infections depends at different anatomic sites and the risk of infection. Although the prevalence of specific pathogens varies by infection site, the coagulase-negative Staphylococcus (CoNS), Staphylococcus aureus, Enterococcus faecalis, Escherichia coli, Klebsiella pneumoniae, Micrococcus, Acinetobacter baumannii, and Pseudomonas aeruginosa are the most isolated pathogens (6).

Patients may be exposed to pathogens during hospitalization through different sources of healthcare professionals, environment, medical equipment, and other infected patients (6). Hygiene is acknowledged to be the most important preventing method for avoiding cross-transmission of microorganisms from one patient to another (8). Advancement in hand hygiene, with the goal of reducing nosocomial infection, is an important main concern of WHO (9). Therefore, hand hygiene procedures may be considered high priority strategy to decrease nosocomial infections.

The aim of this study was to investigate the presence of bacterial pathogens on healthcare workers’ hands to design an appropriate preventing program by using of hand hygiene method.

Thirty-two nurses were randomly selected from different wards of the Sheikh Hospital (Mashhad, Iran), including emergency, ICU, surgery, peritoneal dialysis, nephrology, and hematology. The samples were taken from their hands. In this regard, swab soaked in sterile transport solution rubbed around the nails and under them, between the fingers and the palm of the hand (especially the pulp of the fingers). The samples were cultured on blood agar, EMB agar, and chocolate agar media. The cultured media were incubated at 37°C for 48 hours. Biochemical reactions and Gram staining test were used to determine isolates. Differential tests used for Gram-positive bacteria included catalase test, mannitol fermentation test, hippurate hydrolysis test, and coagulase test. Additionally, the lactose fermentation, motility test, indole test, methyl red test, citrate test, urea test, phenylalanine deaminase medium tests, and lysine decarboxylase test were used to identify Gram-negative bacteria. After taking the hand impressions, each participant’s hand was cleaned using a standard procedure using soap and 70% isopropyl alcohol-based hand sanitizer for 30 seconds (10).

After data were analyzed with SPSS v.22 software.

4.1. Bacteria Isolated Before the Use of Hand Disinfection

The samples were taken from the palms of their hands in the morning shift between 10 AM and 1 PM to determine the type of microbial contamination. Based on obtained results of 32 nurses, nine pathogenic bacteria were isolated, which were considered high-risk nosocomial infections (Table 1).

Table 1. Determination of Nosocomial Bacteria in Nurses and Each Ward

The most commonly isolated organism was CoNS, which was present in 40.76% of the samples. Moreover, the lowest colonizing species were Bacillus, K. oxytoca, A. baumannii, S. maltophilia, or B. cepacia (Table 2). Also, data showed that Gram-positive bacteria predominated over Gram-negative ones (Figure 1). 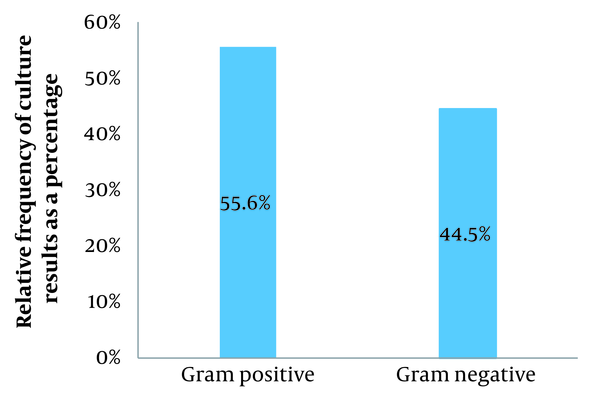 4.2. Bacteria Isolated After the Use of Hand Disinfection

Following hand hygiene procedure, the most effective decontamination for a wide variety of organisms was observed. After the procedure, the number of cultured S. aureus and CoNS was reduced to 1 and 3, respectively. In other words, the decrease growth percentage of other species, including K. pneumoniae, E. coli, P. aeruginosa, Bacillus, K. oxytoca, A. baumannii, Stenotrophomonas (Xanthomonas) maltophilia, and Burkholderia cepacia was almost 100%.

According to the findings of the study, the results of culture collected from nurses’ hands, working in different wards of Sheikh Hospital revealed that ten different types of bacteria were isolated. Moreover, CoNS, K. pneumoniae, and S. aureus were the most common isolated species.

Today, CoNS, as one of the most important hospital-acquired agents and a typical opportunistic agent, have a significant impact on human life and health. Although CoNS members seem to be a part of microbial flora, S. epidermidis, S. saprophyticus, and S. lugdunensis have increasingly become known as pathogen species that cause different infections (11). The importance of this family is that the most common species isolated from nosocomial bloodstream infections recorded in the US national database were CoNS (31%) and S. aureus (20%) (12). Unfortunately, they are particularly related to the use of indwelling or transplanted foreign bodies that are essential in modern medicine. In other words, medical and nursing procedures are recognized as the main transmission route of hospital-acquired infection to the patients (11).

Among the recognized nosocomial species, S. aureus, P. aeruginosa, Klebsiella spp., and Enterococci spp., are the major resistant pathogens of concern (13, 14). In most hospital environments without surveillance programs embedded with control procedures, S. aureus, especially methicillin-resistant (MRSA) infections, are usually prevalent. Although MRSA has been reported to be potentially transmitted from animal to human, from human to animal, and from human to human, direct and indirect contact such as the surface of equipment is also recognized as a potent harbor for microbial growth and transmission (15). Based on previous studies, the most common bacteria that cause NI were S. aureus and E. coli (16, 17). This may be due to an association with an endogenous source, as the organism is a member of the patient’s skin and nasal bacterial flora patients, health specialists’ hands, and hospital instruments (18). However, the transmission of pathogens or potential pathogens from hospital professionals to patients and the resulting diseases have always been a concern. Furthermore, in this study, Gram-positive species were more common than Gram-negative ones, which was almost similar to the findings of the study conducted by Barzegari Esfeden et al. (19). In different studies conducted in the world, the incidence of Gram-negative species in the personnel’s hands varies from 21% - 86%. In the present study, the frequency of Gram-negative species has been reported at 44.45%, which falls within the range of its global prevalence reports (24).

Klebsiella pneumoniae was the most common isolated Gram-negative species. In healthcare centers, K. pneumonia may be transmitted through individuals’ skin or contact via shared items and especially when specialists do not clean their hands after checking a contaminated patient, which may play an important role in transmission of hospital-acquired infections.

In 2002, the Centers for Disease Control and Prevention (CDC) published revised guidelines for hand hygiene (20). The major change in these guidelines is to decontaminate the hands between each patient’s contact using an alcohol-based hand sanitizer (21). In the present study, hand hygiene procedures provided an effective reduction in the number of pathogenic bacteria that may be considered a promising strategy for controlling hospital-acquired infections.

In this study, the nosocomial species prevalence was comparable with other similar studies. The most common isolates were CoNS, S. aureus, E. coli, P. aeruginosa, and Bacillus. Moreover, hand hygiene procedures may effectively reduce the number of pathogenic bacteria that may be considered an appropriate method to decrease nosocomial infections.

The authors appreciate the Sheikh Laboratory staff. The proposal of this research was supported by the Vice-Chancellor for Research of Mashhad University of Medical Sciences (Mashhad, Iran) (H.F., grant no. 970730).

Copyright © 2022, Author(s). This is an open-access article distributed under the terms of the Creative Commons Attribution-NonCommercial 4.0 International License (http://creativecommons.org/licenses/by-nc/4.0/) which permits copy and redistribute the material just in noncommercial usages, provided the original work is properly cited.
download pdf 125.84 KB Get Permission (article level) Import into EndNote Import into BibTex
Number of Comments: 0