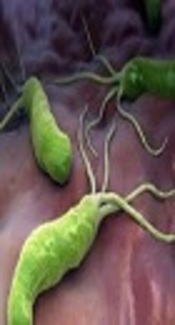 Helicobacter pylori (H. pylori), a Gram-negative bacterium, which colonizes in the gastric mucosa, was discovered in 1984 and was found to be associated with peptic ulcer disease (1). Almost half of the world’s population has been infected with H. pylori, particularly in developing countries where people are more susceptible to the infection, mostly due to the large populations and poor sanitation (2, 3).

H. pylori infection occurs during childhood mostly before 5 years of age. Despite severe immune responses and acidic environment of gastric mucosa, bacteria survive in most occasions. Furthermore, without proper combination antibiotic treatment, these bacteria can live in the host for a lifetime. Survival of bacteria inside the host is mainly related to the local change in acidity through inhibition of acid secretion in the host. In addition, the urease activity of H. pylori neutralizes gastric acidity by generating ammonium.

H. pylori infection leads to complications, ranging from gastritis to different types of gastric cancer (4). Gastric cancer, as the fourth most common cancer, accounts for one-third of cancer-related deaths. Moreover, it has remained one of the public health issues worldwide. In view of the insidious progression of gastric cancer, most cases are diagnosed in advanced stages; therefore, only less than 30% of the patients survive more than 5 years, which indicates the significance of screening programs.

Gastric cancer was the leading cause of more than 700 000 deaths in 2012 (5). According to the histological classification, gastric cancer is categorized into diffused and intestinal or cardia and noncardia types, based on its location (6). Different risk factors, including genetic factors, have been associated with gastric cancer. Moreover, polymorphisms in interleukin-1β and tumor necrosis factor-α are considered significant. However, it should be mentioned that environmental factors such as high salt intake and low level of iron could be also effective.

Cytotoxic antigen (CagA, which forms a secretion system) and vacuolisation protein (VacA) are 2 pathogenic proteins of H. pylori, which have been identified to increase the risk of gastric cancer (9, 10). Epigenetic changes in epithelial cells, for instance, DNA methylation and histone modification induced by H. pylori infection, also lead to gastric cancer progression (11).

H. pylori is the most important risk factor for gastric cancer; therefore, there are promising assumptions for cancer prevention by means of H. pylori treatment. Different studies on many populations have demonstrated the remarkable association between the decreased rate of H. pylori infection and reduced incidence of gastric cancer (5). Therefore, based on international guidelines, high-risk populations are suggested to be screened and treated for H. pylori infection (3), although recent investigations have shown that H. pylori screening and eradication could be costly, even in low-risk populations (12, 13).

The prevalence of H. pylori infection has been reported to be exceedingly high among Iranians (94% and 83% for noncardia and cardia gastric cancer, respectively) (14). On the other hand, gastrointestinal cancer accounts for almost half of cancer cases, and gastric cancer has the second highest incidence rate among all types of cancer in Iran (15).

In conclusion, according to recent studies, H. pylori screening and treatment in highly susceptible populations could be an effective effort to prevent the incidence and mortality of gastric cancer.

Copyright © 2017, International Journal of Infection. This is an open-access article distributed under the terms of the Creative Commons Attribution-NonCommercial 4.0 International License (http://creativecommons.org/licenses/by-nc/4.0/) which permits copy and redistribute the material just in noncommercial usages, provided the original work is properly cited
download pdf 79.28 KB Get Permission (article level) Import into EndNote Import into BibTex
Number of Comments: 0