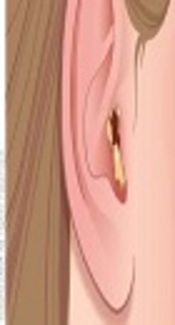 Otitis is a general terminology used for inflammation or infection of the ear; Staphylococcus aureus and Pseudomonas spp. are the most common causes of otitis externa. The resistance mechanism against the beta-lactams group is due to the production of β-lactamase enzymes by the bacteria; the enzymes in staphylococci are encoded by erm genes that confer inducible Clindamycin resistance.

Ear samples were collected from 72 patients with Otitis Externa referred to Ayatollah Roohani hospital during May 2012 to 2013. At first, the isolated bacteria were identified using appropriate differential and selective media, and then were tested for antimicrobial susceptibility testing following the disk diffusion method. Special diagnostic tests were also performed for the identification of ESBL, iAmpC, pAmpC, metallo beta lactamase producers and inducible resistance to clindamycin and methicillin resistant strains. Data were analyzed by the SPSS 22 statistical software.

Considering that some bacteria are concurrently able to produce different types of resistance enzymes, and also the fact that high prevalence rate of resistance belongs to CoNS, it is important and necessary to perform antimicrobial susceptibility testing as per clinical and laboratory standards institute (CLSI) methods in clinical laboratories.

β-Lactamase are the most commonly prescribed antibiotics for the treatment of infectious disease (1). The resistance mechanism against these antibiotics is due to the production of β-lactamases by the relevant gene inherited in the bacterial chromosome or in the plasmid transfer.

According to Ambler classification, Extended-Spectrum B-Lactamases (ESBLs) belong to class A and D. Also, class C and B are called AmpC enzymes (contain two types- plasmid-mediated AmpC or pAmpC and inducible AmpC or iAmpC-) and Metallo beta lactamase, respectively (2); high prevalence of A, B, and C classes of β-lactamase producers have been reported in Enterobacteriaceae (3).

Clindamycin is an antibiotic and a derivative of Lincosamides, which inhibits bacterial activity by binding to the 50S ribosomal subunit. The most common resistance mechanism occurs within Staphylococci that is due to the erm gene, encoding RNA methylase through plasmids (4). Clindamycin is prescribed for the treatment of skin and soft tissue infections, in cases of bacterial antibiotic resistance against methicillin and penicillin allergy (5).

Methicillin is a derivative of the penicillin group and resistant to penicillinase. It is the first choice for the treatment of infections caused by Staphylococci (6); reports showing resistance to methicillin are increasing (5). Biomarker gene mecA, which is responsible for methicillin resistance, contains genes encoding resistance to other antimicrobial drugs (6). Serious infections due to this group of bacteria have had high rate of mortality and morbidity during the past 10 to 20 years, thus inhibiting the spread of Methicillin-Resistant Staphylococcus aureus (MRSA) infections have been very important (7).

Methicillin-resistant S. aureus (MRSA) species are known as the main cause for serious (nosocomial infection and/or acquired community) infections; they are usually resistant to many other commonly used antibiotics (4, 8, 9).

The role of coagulase negative Staphylococci (CoNS) in some infections has been proven, and it cannot be considered as a contaminant (10).

Multi drug resistant (MDR) bacteria are resistant to 3 or more different types of antibiotics (11). Since infections caused by MDR bacteria result in the reduction of antibiotic effectiveness, they have been the main medical problems for the treatment of infections in the recent years.

Otitis is a general terminology for inflammation or infection of the ear; it is one of the widely spread secondary infections among patients (12). Pseudomonas aeruginosa, Escherichia coli, Staphylococcus aureus, Pseudomonas spp., and Proteus mirabilis are the main causes of otitis externa (13, 14).

Inappropriate use of antibiotics for the treatment of otitis externa can result in the spread of the infection to the surrounding tissues, causing critical complications, such as inflammation of internal ear, mastoiditis, thrombosis, brain, and intracranial abscess (15).

The incidence of otitis externa differs around the world; it is about 11% in developing countries, while the highest rate belongs to Ethiopia, according to the world health organization (WHO) report (16).

There has been no reliable information regarding antibiotic resistant bacteria causing otitis in developing countries, such as Iran (17).

With regards to the important role of laboratory detection of beta-lactamase-producing bacteria, and methicillin/clindamycin (inducible) resistant Staphylococci on appropriate treatment, this study aimed at evaluating bacterial resistance of samples that were collected from patients with otitis externa.

B: P. aeruginosa and Acinetobacter baumannii

All discs listed above were included except TS, FOX, CTX and ETP for P. aeruginosa

All discs listed above, except ETP, ATM, and FOX, were used for A. baumannii.

The FOX disc was used to identify methicillin resistant strains in Staphylococci, and the D-Zone test was performed, according to the CLSI standard protocol, for inducible resistance to clindamycin (19).

The SPSS 22 software was used for statistical analysis.

Other isolated bacteria are listed below according to frequency:

The highest and lowest resistance against antimicrobial discs within the gram-negative bacteria were found to be TS (68.7%) and ETP (6.6%), respectively, and for gram-positive bacteria, these were E (48.8%) and LZD (7.3%), respectively.

The highest antibiotic resistance in isolated P. aeruginosa was shown to be against ATM (37.5%) (Table 1) and A. baumannii was sensitive to GM and IMP discs.

Table 1. Frequency of Susceptibility and Resistance of Isolated Bacteria

aThese antibiotics for mentioned bacteria were not used according to the CLSI standard protocol (19).

Among gram negative and positive bacteria, 10 (41.7%) and 16 (39%) MDR bacteria were identified, respectively. One strain of P. aeruginosa and A. baumannii were also found to be MDR.

The frequency of pAmpC-producing strains was found to be highest (36.8%) (Table 2).

Table 2. Frequency of β-Lactamase Producers in Each Isolated Gram-Negative Bacteriaa

bExcept Serratia and P. aeruginosa, the other bacteria were producing two or more different types of enzymes.

The isolated Enterobacter cloacae were found to produce all beta-lactamase enzymes.

From isolated coagulase-negative Staphylococci (CoNS), 18 (50%) bacteria were found to be resistant to the methicillin group (with mecA gene), 4 (11.1%) isolates showed inducible resistance to clindamycin (D-zone test positive), 14 (38.9%) bacteria were MDR, and 13 (36.1%) strains were MDR and methicillin resistant, simultaneously.

All isolated S. aureus were sensitive to methicillin and clindamycin (D-zone test negative).

Methicillin and clindamycin (D-zone test positive) resistance was concurrently observed in one strain of Staphylococcus epidermidis.

In this study, 11.1% of gram-negative bacteria produced ESBL and were sensitive to third generation cephalosporins. Furthermore, the rate of inducible clindamycin resistance and false sensitivity to clindamycin, according to the disc diffusion method among gram-positive cocci, was 44.4%. As a consequence, CLSI guidelines for AST, screening, and confirmatory tests are recommended to choose appropriate antibiotics.

The most common gram negative bacteria causing ear infections in the current study include:

Production of ESBL amongst Pseudomonas aeruginosa and E. coli was 12.5% and 80%, respectively. Moreover, the prevalence rates of AmpC-producing strains was 75% in P. aeruginosa and 40% in E. coli (Table 2).

Multidrug resistant bacteria are the major challenge to clinicians for the treatment of infected patients. In this study, 41.7% of gram-negative bacteria, including A. baumannii, were MDR strains and 60% were positive simultaneously for metalo beta lactamase and AmpC production. Mahdian from Tehran and Khadidja from Aljazira reported that 70.3% and 93.6% of isolated A. baumannii from clinical specimens were found to be MDR strains (24, 25).

The prevalence of CoNS strains has increased in the recent years; it was reported as 34.6% in Shahli’s investigation (2006) (26) and 87.8% in the current study. It seems that they have been generally considered as normal flora (10) and AST based on CLSI standard methods has not been performed.

In the current study, half of the CoNS were resistant to the methicillin group. It is noteworthy to mention that among 14 MDR CoNS isolates, 3 (16.7%) strains were D-zone test positive and 2 (14.3%) strains were resistant to the methicillin group. According to studies conducted by Niedja (Brazil) and Bhatt (India), none of the CoNS isolates were D-zone test positive (5, 27).

Moreover, in this research, S. aureus isolates were not resistant to the methicillin group and had negative D-zone test results; although none of them were MDR strains.

However, several studies from different countries, such as Nepal and Pakistan, showed that some strains of S. aureus were MRSA (28, 29). Additionally, Asadullah from Pakistan and Appalaraju from India reported that 15.84% and 42.1% of MRSA strains were positive for inducible clindamycin resistance test.

The current findings showed that Staphylococci were highly resistant against new antibiotics, such as LZD (7.3%) and TEC (17.1%), consequently these antibiotics must be carefully used for patients’ treatment. On the other hand, Titecat (2011) reported that CoNS strains were resistant to TEC (22%) and LZD (3.5%) (30). Jones RN (2011) observed high (99.7%) sensitivity to LZD and TEC in the isolated gram-positive cocci (31).

There are some differences between the current study and other previous studies. This could be due to differences in the type of clinical samples, medical centers and treatment procedures, geographical locations with different bacterial prevalence patterns, and resistance and level of education within the affected population regarding the correct use of antibiotics.

With regards to this study, there are noticeable differences between laboratory test results of AST, screening, and confirmatory tests. Therefore, it is suggested for all of these tests to be concurrently performed in clinical laboratories for clinicians to select the appropriate treatment.

The authors would like to thank Babol University of Medical Sciences for the approval of the study (9543218, 13 Dec, 2016) and administrative support of this research, and Dr. Evangeline Foronda for the English editing.