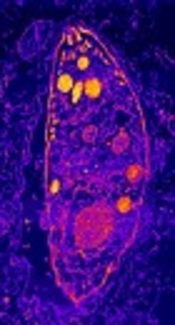 Toxoplasma gondii: Are There any Implications for Routine Blood Screening?

Toxoplasma gondii is an obligate intracellular member of phylum Apicomplexa, which is the most prevalent parasitic infection in humans and many warm blooded animal species, involving one-third of the world population, specifically in developing countries with the prevalence rate varying between 30% and 60% (1-3). Toxoplasma gondii is considered as a transfusion-transmissible infection. In addition to blood-borne transmission, Toxoplasma could enter an intermediate host by food-borne (consuming raw meat), and zoonotic (ingesting oocysts shed by infected cats), congenital (mother to fetus) routes as well as organ transplantation (1, 3-5). Risk of transmission of toxoplasmosis by blood transfusion from seemingly asymptomatic and healthy individuals, who are carriers of infection, places an extra burden on the global population, especially where toxoplasmosis is more common. Seropositive individuals, particularly those at the acute stage of infection may possess a remarkable role in transmission (5, 6). Some reports have documented the transmission of parasites by transfusion of blood and leukocytes or the viability of parasites in citrated blood at 5°C for more than 50 days (7, 8). Reportedly, delay and prevention of disease transmission could not be accomplished by refrigeration of blood packs during storage periods (7). Blood products are often donated to patients with sickle cell anemia, aplastic anemia, thalassemia, cancer chemotherapy, and to those who are treated with immunosuppressive agents, such as transplantation recipients. Since pre-transfusion screening for T. gondii has not yet been considered, vulnerable clinical groups, such as immunocompromised patients, were at high risk for acute and severe toxoplasmosis by donated blood (5, 9, 10).

In order to evaluate the molecular epidemiology of T. gondii in blood donors, the researchers systematically searched 6 databases (Science Direct, Web of Science, Scopus, PubMed, Google Scholar and, Ovid), using related keywords. Only those papers that estimated the toxoplasmosis status using both serologic and molecular methods were selected. Data extraction was performed on the basis of title, first author, country, study population, number of positive subjects in terms of IgG, IgM or both, used methods (molecular and serologic techniques), and references.

Finally, 6 papers met the criteria to be included in this paper (6, 9-13) (Table 1). In a recent systematic review and meta-analysis, seroprevalence of T. gondii in blood donors was reported as 33% (95% CI, 28% to 39%) from a global perspective (5). According to some documentations with regards to T. gondii viability in blood products for several weeks, the risk of transmission of this infectious agent will be increased by blood transfusion. For instance, in the study of Siegel et al. transmission of Toxoplasma through leukocytes transfusion from infected donors was documented (7). The same route of infection was implied by Roth et al. (8). Also a unique case of acquired retinochoroiditis resulted from toxoplasmosis was reported with platelet transfusion (14).

In the current study, regarding included articles based on molecular methods in blood donors, in the low proportion of IgM+ samples, DNA of the parasite was identified (Table 1). However, it is surprising that 2 papers reported higher acute toxoplasmosis using molecular methods in comparison to serology tests (IgM+ or both IgG + /IgM+) (9, 12). It seems that in blood samples that were diagnosed as either negative or positive only for IgG antibody (as an indicator for chronic infection), DNA of parasite may be identified. It should be noted that if a donor is seropositive for T. gondii, it does not necessarily mean that their blood will be infectious. Patients, who receive seropositive blood and later manifest toxoplasmosis, may not have been infected by transfusion and may have been previously infected, and symptoms of toxoplasmosis became evident due to their immunocompromised condition, or due to current infection by a blood-independent (for example transplanted tissue etc.) mechanism. In addition, screening donated bloods that merely relied on the presence of anti-T. gondii antibodies would likely neglect a high percentage of donors from an endemic country’s donor pool, whereas only a very small fraction of donors were likely infectious. If testing turns out to be a viable strategy for endemic countries, it is likely that a test for the direct presence of the organism in blood (an antigen test or a DNA-based test) will be required. The literature on transfusion transmission toxoplasmosis is limited. The American association of blood banks (AABB) categorizes blood transmission of toxoplasmosis as rare: only 4 cases have been definitively demonstrated and those were associated with transfusion of granulocyte concentrates, as well as one possible case involving a platelet transfusion (www.aabb.org/tm/eid/Documents/227s.pdf) (5).

Though a relatively high seroprevalence was obtained in included studies, this finding is not necessarily representative of active infection. Given the differences in the number of IgM positive cases and the number of detected DNA of parasite by molecular methods in a few studies (represented in Table 1), it is suggested for future studies to use the Enzyme Linked Immunosorbent Assay (ELISA) as a standard serology method and then the polymerase chain reaction (PCR) as a canonical molecular procedure to reach more accurate and appreciable outcomes. In conclusion, this report illustrates that high serologic prevalence does not justify widespread donor screening, for 2 reasons 1) serology does not imply infectivity, and 2) a high serologic background prevalence (if used to eliminate donors) would result in major limitation on blood availability, thus, causing more harm than toxoplasmosis. It seems that a test for the direct presence of the organism in blood (an antigen test or a DNA based test) will be useful. The researchers of the current study suggest a future focus on this issue throughout the globe, especially parts of the world, which lack data on this subject.

The authors would like to thank all staff of the Department of Parasitology of Tarbiat Modares University, Tehran, Iran.

Copyright © 2017, International Journal of Infection. This is an open-access article distributed under the terms of the Creative Commons Attribution-NonCommercial 4.0 International License (http://creativecommons.org/licenses/by-nc/4.0/) which permits copy and redistribute the material just in noncommercial usages, provided the original work is properly cited.
download pdf 93.37 KB Get Permission (article level) Import into EndNote Import into BibTex
Number of Comments: 0