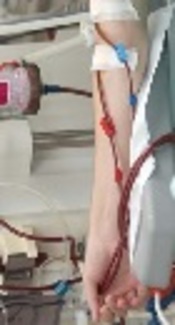 Blood-borne viral infection is a public health problem, especially in high-risk patients, including those with renal failure.

The aim of this study was to investigate the prevalence of human immunodeficiency virus (HIV), hepatitis B virus (HBV), and hepatitis C virus (HCV) infections in patients undergoing hemodialysis.

In this study, 94 patients were recruited and examined for HBV surface antigen (HBsAg), HCV antibodies (HCVAb), and HIV using ELISA assay. HCV positivity was confirmed via real-time polymerase chain reaction (RT-PCR). The patients were followed-up by testing their blood samples for HBsAg, HCVAb, and HIV on a monthly basis.

The prevalence of HBsAg and HCV positivity in subjects undergoing hemodialysis was comparable to most neighboring countries. Strict infection control measures should be taken to prevent infection transmission.

Hepatitis B virus (HBV) and hepatitis C virus (HCV) infections are the most important infectious diseases transmitted via parenteral routes in patients on regular hemodialysis. Infections with these viruses are also the major cause of liver diseases in both developed and developing countries. These infections may produce serious consequences, such as cirrhosis and hepatocellular carcinoma.

The prevalence of HCV antibody (HCVAb) positivity in hemodialysis patients varies markedly from 5% in industrialized countries to 54% in some developing countries (1). On the other hand, serum HBV surface antigen (HBsAg) seropositivity ranges from less than 1% to 20% in patients on regular hemodialysis. However, outbreaks of acute HBV infection continue to occur in this setting (2). In a study conducted in Iran on changes in the prevalence of HBV and HCV infections in dialysis patients, the prevalence of HBsAg positivity and HCVAb decreased from 3.8% and 14.4% in 1999 to 2.6% and 4.5% in 2006, respectively (3).

In another study conducted in Turkey, 13% of recruited hemodialysis patients were HBsAg positive, 20% were HCV positive, and 4% showed HBV and HCV coinfections (4). The prevalence of HBV and HCV has been studied previously in Iraq in different groups, such as blood donors, healthcare workers, and thalassaemia patients (5-8). In a study conducted in Iraq on 7900 blood donors, it was found that 0.78% of donors were HBsAg positive, and only 0.013% of samples were HCV positive (9).

So far, no study has been conducted to determine the prevalence of HBV and HCV infections in Iraq. Furthermore, hemodialysis can be considered a risk factor for HIV transmission (10). Five outbreaks of HIV have been reported in third-world countries. In all reported outbreaks, thorough investigations showed evidence of violation of infection control practices (10). Therefore, for a more effective planning of infection control measures and obtaining reliable, updated information on patients, we studied the prevalence of HIV, HBV, and HCV infections in dialysis patients.

A questionnaire was used to collect the patients’ data. All the patients were inquired about the history of vaccination, history of surgeries, kidney dialysis, dental procedures, and blood product transfusion. Data analysis was conducted using SPSS version 21.

This study was approved by the scientific and ethics committee of college of medicine, university of Duhok. Written informed consents were obtained from all the subjects before data collection.

Duhok dialysis center provides services for more than 2 million people. In this war-torn region, more than half of people are internally displaced or refugees from Syria. According to our database, the number of dialysis sessions substantially increased from 627 sessions per month before the war and arrival of refugees to 1335 sessions per month after the war. Revision of patient attendance records in the past year showed a sharp increase in unscheduled and emergency dialysis sessions.

During the study, 109 patients attended Duhok dialysis center every month. Overall, 15 patients underwent renal transplant and were excluded from the study. From the beginning of the study, 3 out of 94 (3.2%) patients were HBsAg positive. HBV chronicity was studied in patients who were HBsAg positive; all these cases were HBc-IgM negative and HBc-IgG positive, indicating chronic HBV infection. Based on the findings, 4 out of 94 (4.3%) patients were HCVAb positive; HCV-positive patients underwent PCR to confirm the current infection. HCV RT-PCR showed positive results in these patients.

From January 2015 to May 2016, blood samples were examined monthly for HBsAg, HCVAb, and HIV. In October 2015, three additional samples (2 males and 1 female) showed HCVAb positivity. The tests were repeated, confirming the positive results. Blood samples from 3 patients were sent for HCV RT-PCR analysis to confirm HCV positivity. All the samples were positive, as PCR confirmed the current HCV infection.

The patients were interviewed about the risk factors for HCV transmission, including drug use, blood transfusion, dental procedures, and surgical operations in the past 6 months. All the patients denied any history of these risk factors in the past 6 months. All the subjects in our study were negative for HIV. Also, among 94 recruited subjects, 42% were vaccinated against HBV infection.

In this study, 40 out of 94 (42.6%) patients reported a history of HBV vaccination. All the recruited samples noted a history of surgeries, and all denied sexual activities outside marriage. It was shown that 4 out of 5 (80%) HBV-positive subjects had a history of blood transfusion in comparison to 37 out of 89 (83.1%) HBV-negative subjects (P = 0.32). No significant difference was found between HBV-positive and -negative subjects with regard to the history of dental surgeries or tattooing (Table 1). Additionally, no significant differences were found between HCV-positive and -negative patients regarding the history of blood transfusion, surgery, dental surgery, and tattooing (Table 2).

So far, no study in Duhok has investigated the prevalence of HBV, HCV, or HIV in patients undergoing hemodialysis. Therefore, we investigated the prevalence of these viral infections in patients to obtain some baseline information for the assessment of infection control measures and their effectiveness in the region. Renal dialysis is considered a risk factor for transmission of HIV. HIV outbreak has been previously reported in dialysis units. In a previous study in Egypt, 82 new cases of HIV were reported in a dialysis unit (11). In addition, 12 new HIV cases were reported in an outbreak in Colombia (12).

HIV is extremely rare in Duhok. In our study, we investigated the subjects for HIV positivity, and none were found positive for this virus. In general, HBV is a public health problem, associated with deleterious consequences, such as liver cirrhosis and cancer. In a previous study on 8615 adult hemodialysis patients from 308 dialysis centers in Western Europe and the United States, the prevalence of HBV infection ranged from 0% to 6.6% (13). In developing countries, the prevalence of HBV infection varies from 2% to 20% in patients with hemodialysis (14-16).

In 2 studies conducted in Saudi Arabia and Jordan, two neighboring countries of Iraq, the prevalence of HBV in renal dialysis patients was 4.6% and 5.9%, respectively (16, 17). In our study, we found that 3.2% of subjects were HBsAg positive. It is worth mentioning that this infection could be prevented by vaccination and education programs. Despite urging patients to complete HBV vaccination in our unit, only 42% of subjects attending the dialysis unit were vaccinated. This mandated changes in vaccination programs, and all patients should receive vaccination with regular monitoring of the vaccination program.

At the beginning of our study, the prevalence of HCV was 4.3%. However, the prevalence rate increased to 7.4% due to new infections. Patients with new infections were interviewed about the risk factors for HCV transmission, including drug use, blood transfusion, dental procedures, and surgical operation in the past year; all of them denied any history of these risk factors. Infection control measures were all revised. it was found that the dialysis sessions were doubled in the past year before diagnosis of new cases. This sharp increase in dialysis sessions was attributed to newcomers to the city (internally displaced people and refugees). In fact, the sterilization staff may be under pressure to finish sterilization sessions as soon as possible to meet the increasing demands for all dialysis devices in the center. Therefore, transmission may be associated with exposure to inadequately sterilized dialysis.

To conclude, all patients were HIV negative in the present study. The prevalence of HBV in hemodialysis patients in Iraq is comparable to most neighboring countries. On the other hand, the prevalence of HCV was low at the beginning of the study. However, new cases of HCV were reported due to intensive dialysis schedules for refugees. Therefore, strict infection control measures should be taken to prevent infection transmission.

Copyright © 2017, International Journal of Infection. This is an open-access article distributed under the terms of the Creative Commons Attribution-NonCommercial 4.0 International License (http://creativecommons.org/licenses/by-nc/4.0/) which permits copy and redistribute the material just in noncommercial usages, provided the original work is properly cited.
download pdf 89.39 KB Get Permission (article level) Import into EndNote Import into BibTex
Number of Comments: 0