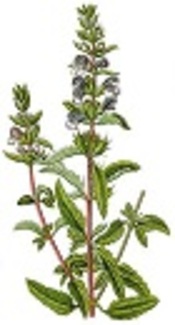 Today, due to the increased drug resistance, plants are used for treatment. The aim of this study was to investigate the effect of ethanol extract of Badrashbu (Dracocephalum moldavica) against strains of antibiotic-resistant Escherichia coli and Klebsiella pneumonia.

Badrashbu plant extracts were prepared using a rotary device. Escherichia coli and Klebsiella pneumonia were isolated from nosocomial infection patients at hospitals of Zabol. The MIC and MBC of Badrashbu extracts in different concentrations of bacteria were determined by disk diffusion method.

The results of this study showed that Badrashbu extract inhibits Escherichia coli and Klebsiella pneumonia; so it can be used to reduce the plant disease.

Medicinal plants are now being widely used as a good source for treating diseases in different countries. About 60 to 85% of people in different countries use traditional treatments for common diseases. Dracocephalum moldavica is an aromatic plant from Lamiaceae family native to central Asia and eastern and central Europe (1). It is used as a tea or medicinal plant for curing deficiencies of stomach, kidney, and lung. Its antimicrobial effects have been widely studied. The plant has been used for controlling the growth of Escherichia coli and Salmonella (2-5). The plant’s extract also has anti-helicobacter activities (6). It has been used as pain-killer, anti-inflation (7, 8), antimicrobial (9), and antifungal agent (10).

E. coli is Gram-negative basil and an important bacterium from Enterobacteriaceae family. It causes infections such as sepsis or blood infection, gastroenteritis, infant meningitis, wound infection, pneumonia, peritonitis, and urinal infections. It is also a cause of kidney disorders in children (11, 12).

Klebsiella pneumoniae is a gram-negative intestinal bacterium and a part of the natural microflora of the body. About one-third of people have this bacterium. The bacterium causes a wide range of diseases including bacteremic infections, pneumonia, and urinal infections. Klebsiella pneumonia covers a small number of pneumonia cases but causes a high mortality rate of 90%. This microbe is more likely to cause necrosis than pneumococcal pneumonia. This paper aims at exploring the effects of ethanol extract of Dracocephalum moldavica (Badrashbu) against strains of antibiotic-resistant Escherichia coli and Klebsiella pneumonia.

The seed of Dracocephalum moldavica was purchased from Pakan Bazr company of Isfahan and cultivated in the Zabol University’s greenhouse. Plants were gathered and the leaves were dried away from sunlight.

Maceration method was used for preparing the extract. To this end, leaves were cut and 50 g of each time sample was filtered by filter paper. After extraction, the obtained extracts were condensed by the rotary device (distilling in a vacuum) at 40 and 50°C and dried during 2 days at the same temperature.

2.1. Determining the Dry Weight of the Extract

The various samples of E. coli were gathered from the positive samples of the patients hospitalized in Buali, Payambar Akram, and Ali bin Abitalib hospitals of Zahedan. The samples were cultured on nitrite agar medium. IMVIC test was used to separate E. coli from other gram-negative bacteria. The gathered isolates of K. pneumonia were cultured on blood agar and Mc Canki media. The grown colonies, which were similar to K. pneumonia, were detected by using biochemical tests such as growth in Klinger agar media, Simon Citrate, SIM, and Urea agar.

2.2. Antimicrobial Test of the Extract

Table 1. The MIC of Extracts Against E. coli and Klebsiella pneumonia

On the other hand, Klebsiella pneumonia isolates were resistant to antibiotics such as Ceftazidime (35%), and Cefixime (61.2%). In the study conducted in Besat hospital, Klebsiella pneumonia isolates were resistant to antibiotics such as Gentamicin (46.7%), ampicillin (30%), Nitrofurantoin (26.7%), and Ceftazidime (13.3%) (16). The results of this study are in accordance with the results of the current study. The results of the present study showed that Dracocephalum moldavica extract could inhibit E. coli and K. pneumonia at various concentrations. The antimicrobial effects of D. moldavica essential oil were measured against 4 gram-positive and 2 gram-negative bacteria and factors such as quantitative and qualitative activities related to inhibitory including cloud, cloud diameter, and MIC rate were evaluated. MIC was shown for bacteria, at the scope of 26 - 36 and 30 - 38 mm at concentrations of 0.4 - 0.8 microgram per disk. The two types of bacteria were equally sensitive to D. moldavica essential oil. Therefore, the inhibitory effect of the essential oil is dependent on its concentration (17). The mentioned essential oil has shown anti-fungal effects against M. heimalis, P. notatum, A. niger, and F. oxysporum. The essential oil with concentrations of 0.02, 0.04, 0.08, and 0.12 mg/mL could inhibit the growth of a famous fungus called Aspergillus niger with concentrations of 32, 53, 77, 100, and 100, respectively. The essential oil also had similar effects against P. notatum, M. heimalis, notatum, and F. oxysporum. D. moldavica essential oil could inhibit them at a concentration of 0.08 mg/mL. The antifungal effect of D. moldavica oil was higher so that it could inhibit all isolates with a concentration of 0.08 (MIC) and all fungi with the same concentration. There seems to be a relationship between the chemical compounds of the oil and anti-fungal activity. Many of the essential oil components show antimicrobial effects and many others are structurally considered as ketones, alcohols, or phenolic monoterpenes (18, 19).

In the study of Kamali, the highest antibacterial index was observed for ethyl acetate extract on Bacillus cereus in both disc diffusion (12 mm) and MIC-MBC methods and the MIC value for extracts ranged between 0.781 and 25 mg/mL. The results of this investigation indicated that Dracocephalum kotschyi was found to possess moderate antibacterial activities. Further research is required to identify the active photochemical compounds responsible for these biological activities (20).

The extract of Dracocephalum moldavica contained polar compounds such as luteolin-7-O-glucoside, rosmarinic acid, luteolin and apigenin and this extract demonstrated antioxidant activity in all the antioxidant assays but it was not as potent as the positive control (21). The most active compounds of this genus are flavonoids, such as Luteolin, quercetin, apigenin and these flavonoids appear to play an important role in the biological activities of Dracocephalum species (22). In addition, these flavonoids possess anti-bacterial properties (23).

The study results revealed the antimicrobial effects of Dracocephalum moldavica against bacteria relating to urinal infections. These effects should be more carefully studied and their supporting components should be detected. In this way, they can be used in medicine formula for treating infections.

The present study was conducted in the Payame Noor University of Zabol. We thank Dr. Siasar for his valuable contributions to our study.

Copyright © 2017, International Journal of Infection. This is an open-access article distributed under the terms of the Creative Commons Attribution-NonCommercial 4.0 International License (http://creativecommons.org/licenses/by-nc/4.0/) which permits copy and redistribute the material just in noncommercial usages, provided the original work is properly cited.
download pdf 103.04 KB Get Permission (article level) Import into EndNote Import into BibTex
Number of Comments: 0