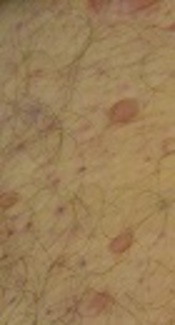 Nocardia cyriacigeorgica: A Case of Disseminated Infection in an Immunocompromised Patient

Nocardia cyriacigeorgica is a common environmental organism isolated from different clinical samples in Europe, Asia, and North America, predominantly from respiratory samples, but also from samples from several other sites.

In the current paper a disseminated Nocardia cyriacigeorgica infection in an immunocompromised patient was reported. The patient was admitted to the under study hospital with multiple cutaneous abscess such as lesion and paraspinal abscess developed to brain abscess.

Nocardiosis is a sever opportunistic infection in the last 2 decades due to the recent increase in the number of immunocompromised patients that occurred from advances in transplantation, cancer, chemotherapy, acquired immune deficiency syndrome (AIDS), and immunosuppression therapy in rheumatologic diseases (1). The causative organism of nocardiosis is Nocardia species; they are aerobic, catalase positive, Gram-variable to Gram-positive and partially acid fast bacteria and are generally slow growing, non-motile bacilli with branching filaments. These soil-born ubiquitous actinomycetes often cause localized or disseminated infection. Despite the relative variety of Nocardia spp., as a cause of cerebral infection, the brain is the most frequent non-pulmonary site involved in disseminated nocardiasis (2). Disseminated nocardiosis is defined as a Nocardia infection in 2 or more non-contiguous sites.

A 61-year-old male with the history of diabetes mellitus and rheumatoid arteritis was admitted in May 2015 to Khatam Al-Anbia Hospital, Tehran, Iran, with complaints of multiple cutaneous abscess lesions and right side weakness with lumbar pain.

He had been diagnosed with rheumatoid arteritis and vacuities 5 months earlier and was receiving immunosuppression therapy consisted of azathioprine (50 mg daily), oral prednisolone (75 mg daily), and methotrexate (7.5 mg weekly). On physical examination, he was lethargic and decreased force of right sided extremity muscles than the left side was observed. Also, lumbosacral spinal tenderness and multiple cutaneous abscess lesions 0.5 - 1.5 cm in diameter in thorax, abdomen, and upper and lower limbs were observed (Figure 1). Under examination, the vital signs were unremarkable at the time of admission: Due to the lethargic condition with right sided weakness, brain computed tomography (CT) scan with intravenous (IV) contrast was done that revealed a mass lesion with cerebral abscess. The lumbosacral magnetic resonance imaging (MRI) was performed because of spinal tenderness, and paraspinal abscess in lumbosacral area was observed (Figures 2 and 3). The patient was treated with trimethoprim/sulfamethoxazole (TMP/SMX) (160/800 mg), and ceftriaxone and imipenem (1 g IV) due to cerebral abscess and multiple cutaneous abscess lesions and the history of immunosuppression therapy.

Despite combination therapy of this disseminated Nocardia sp. with imipenem, ceftriaxone, and TMP/SMX, the patient deteriorated while on antibiotic therapy and his level of consciousness dropped. There was no change in the new brain CT scan (Figure 4). Chest X-ray showed infiltration in the lung base and bilateral pleural effusion (Figure 5). For this reason, linezolid (600 mg IV twice a day) was added to the previous treatment regimen. Chest X-Ray Showed Infiltration in the Lung Base and Bilateral Pleural Effusion.

Unfortunately, the patient rapidly died. Post mortem examinations of isolated Nocardia sp. based phenotypic properties and sequencing method indicated Nocardia cyriacigeorgica as the cause of disease. The initial isolation of the current study sample was identified by the phenotypic properties such as modified acid fast growth in lysozyme, and hydrolyzing tyrosine, xanthine, hypoxanthine and uric acid. To identify more precisely, polymerase chain reaction (PCR) was performed on 16s-rRNA of the isolated bacteria. The 16s-rRNA sequences were recorded in GenBank of NCBI. The16s-rRNA sequences of Nocardia cyriacigeorgica in the current case were submitted to GenBank, and closely compared with those of the NCBI registered type (N. cyriageorgica DSM44434T); and 100% similarity with this strain and 0% gap in this isolate was found.

Nocardia cyriageorgica was first identified in 2001 by Yassin et al. (5) as a novel species differing from the previously described members of genus Nocardia in terms of molecular and biomedical characteristics. A study by Convill et al. based on DNA-DNA homology, indicated that N. cyriageorgica was indeed a member of N. astroides drug patter VI. In the Southern USA N. asteroids drug type VI is the most frequent reported Nocardia sp. This species of Nocadia is found primarily in soil, but can also inhibit humans and is sometimes found in water habitats (6). Neocardiacyriageorgica, similar to other species of Nocardia, is considered an opportunistic pathogen that affects immunosuppressed patients who are particularly susceptible to Nocardia cyriacigeorgica (7). Nocardia cyriacigeorgica could be an etiologic agent of Parkinson disease due to its ability to spread to the brain via the blood stream (8). Dry and windy areas are the primary location for the infection, since the winds enhance the relocation of the microbe (8). Nocardia cyriacigeorgica and type VI strains of Nocardia spp. have a same antibiogram susceptibility pattern and are typically susceptible to sulfonamide, amikacin, linezolid, imipenem, and broad spectrum cephalosporins (9), while remaining resistant to clarithromycin and penicillin, with the exception of a few strains of N. cyriacigeorgica that are reported susceptible to ciprofloxacin (10).

The current case results may help to better identify N. cyriacigeorgica and its ability to cause disseminated Nocardia infection. The lungs are the primary site of Nocardia cyriacigeorgica infection (11). Neocardia cyriageorgica was originally thought to belong to NAC, due to differences in antibiotic susceptibility patterns; now it is considered a separate entity with the advent of newer molecular diagnostic techniques such as 16s-rRNA gene (12) or matrix- assisted laser depression. It is reported that ionization time to combat invasive infection caused by N.cyriageorgica is increasing.

Copyright © 2018, International Journal of Infection. This is an open-access article distributed under the terms of the Creative Commons Attribution-NonCommercial 4.0 International License (http://creativecommons.org/licenses/by-nc/4.0/) which permits copy and redistribute the material just in noncommercial usages, provided the original work is properly cited.
download pdf 4.31 MB Get Permission (article level) Import into EndNote Import into BibTex
Number of Comments: 0