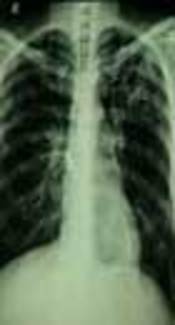 The patient was a 85 year-old woman admitted to a hospital due to productive cough, dyspnea, fever, night sweats, weigh lost, hemoptysis, chest pain, anorexia, vomiting, and hematuria who had the history of pulmonary tuberculosis. According to clinical manifestation, laboratory examination, chest X-ray, and presence of acid-fast bacilli in direct smear, reactivation of tuberculosis was assumed and anti-TB chemotherapy was started; however, the patients’ symptoms were not improved. The causative agent was isolated from the sputum samples of the patient and identified as Mycobacterium abscessus by using phenotypic tests and molecular method. According to the antibiotic susceptibility results, the patient was treated with linezolid, amikacin, and cefoxitin after two weeks.

This is the first report of pulmonary infection caused by M. abscessus in patients with a history of pulmonary tuberculosis in Iran. Therefore, for the purpose of patient management, final diagnosis and appropriate treatment, non-tuberculosis mycobacteria (NTM) should be identified to the species level.

Non-tuberculosis mycobacteria (NTM) are ubiquitous environmental organisms, which were introduced as human pathogenic in 1990’s. This group of bacteria can result in various infection including pulmonary, cutaneous, brain, eye, blood stream, and catheter-related infection in immune-compromised patients and even healthy individuals (1, 2).

According to the literature, several reports of drug-resistant Mycobacterium tuberculosis (DR-TB) from developing countries are wrong. In fact, Mycobacterium spp. was not identified at species level in these laboratories, and anti-tuberculosis drugs were routinely recommend for these patients. However, given that non-tuberculosis mycobacteria (NTM) are resistant to anti-tuberculosis drugs; the patients were not cured and were misdiagnosed with DR-TB (3). According to the American thoracic society (ATS) guideline, identification and differentiation of clinical isolates of Mycobacterium spp. is essential for final diagnosis, appropriate treatment, patient management, clinical significance, and epidemiological studies (1, 4).

Mycobacterium abscessus was originally classified as subspecies of Mycobacterium chelonae by Moore and Frerichs in 1953; 23 later, this bacterium was reclassified as novel species by Kubica et al. Today, M. abscessus is considered as a group of rapidly growing mycobacteria (RGM), which are emerged as an important pathogen in humans and recognized as the cause of approximately 65% - 80% of lung disease induced by rapidly growing mycobacteria. M. abscessus is resistant to a wide range of antibiotics and its treatment is very difficult (5, 6). Here, we describe a case of M. abscessus pulmonary infection mimicking pulmonary tuberculosis in a healthy patient with a history of previous pulmonary TB. 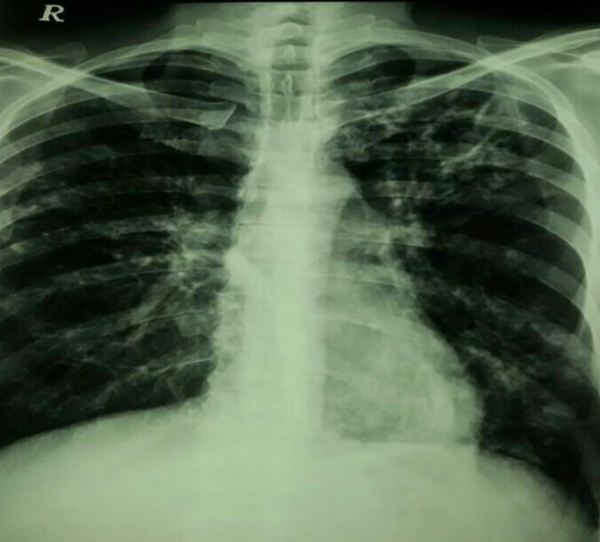 Chest X-ray of the patient 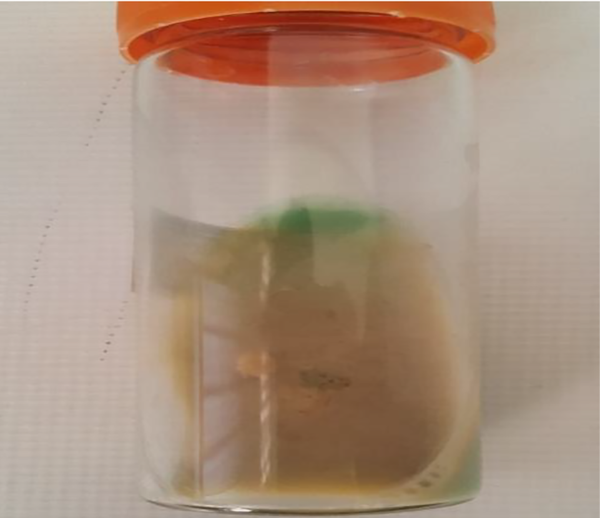 The antibiotic susceptibility testing was performed using micro-broth dilution as recommended by clinical and laboratory standards institute (CLSI) (7). The antibiotic sensitivity test showed that the isolate was sensitive to amikacin, cefoxitin, and linezolid. Moreover, this isolate exhibited resistance to clarithromycin and doxycycline. Finally, the patient was treated with linezolid (600 mg twice a day), amikacin (15 mg/kg/d), and cefoxitin (200 mg/kg/d) for six months. The patient was completely recovered after two weeks.

Formal consent for publication was obtained from the patient.

Given the lack of expert technicians in TB endemic developing countries, mycobacterial infection could be diagnosed as M. tuberculosis based on the presence of acid fast bacilli in direct smear microbiology. Consequently, the patients would be treated with anti-tuberculosis drugs and regarding no response to TB-drugs, the disease may be presumed as drug-resistant TB (3). Identification and differentiation of NTM using phenotypic test are difficult to standardize, in addition to its high cost, need to expertise staff, being time-consuming, labor-intensive; it may be even wrong in some cases. However, molecular methods such as PCR-restriction fragment length polymorphism (PCR-RFP) and sequencing using housekeeping genes (for example 16S rRNA, 16S-23S rRNA internal transcribed spacer (ITS), rpoB, hsp65, recA, …) are inexpensive, rapid, accurate, and reliable for identification of NTM to species level (1).

M. abscessus is one of the important groups of RGM (Rapidly growing mycobacteria), which are able to cause serious infection in immune-compromised patients as well as healthy people. This group of mycobacteria can contaminate medical instruments and cause disseminated infection in patients who use catheters and other medical equipment (2, 10). One of the main points about M. abscessus-caused human infection is its antibiotic resistance. Many NTM species are susceptible to new macrolides and can be treated with clarithromycin and azithromycin. However, unfortunately, M. abscessus infections are inefficient to macrolide-based chemotherapy due to overexpression of erm (erythromycin ribosomal methylase gene) or production of biofilm (9-12). Combinational therapy of amikacin with cefoxitin or imipenem and oral macrolides has been recommended by American thoracic society and infectious diseases society of America. However, insufficient treatment response rates of M. abscessus infections, optimal therapeutic regimens, and treatment durations are not well established and challengeable (4-6). Paradoxically, there has been evidence for person-to-person transmission of M. abscessus between patients with cystic fibrosis (12, 13).

In conclusion, M. abscessus can cause pulmonary infection mimicking pulmonary tuberculosis. The present study emphasized the problems about identification of NTM in developing countries, and highlighted misdiagnosis of NTM pulmonary infection with tuberculosis. Precise identification should be determined based on the standard microbiologic protocols, however, previous history of patients and clinical manifestation are not completely reliable. Furthermore, molecular methods such as sequencing of the 16S rRNA, rpoB, and hsp65 can help us in rapid (in urgent cases), reliable, and efficient identification of NTM at the species level.

Copyright © 2018, International Journal of Infection. This is an open-access article distributed under the terms of the Creative Commons Attribution-NonCommercial 4.0 International License (http://creativecommons.org/licenses/by-nc/4.0/) which permits copy and redistribute the material just in noncommercial usages, provided the original work is properly cited
download pdf 1.88 MB Abstract XML Get Permission (article level) Import into EndNote Import into BibTex
Number of Comments: 0