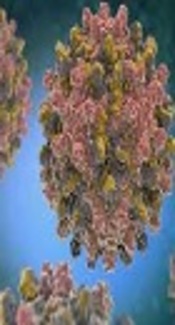 Hepatitis B Virus and Malaria Co-infection Causing Significant Changes in Hematological and Liver Function Indices in a Cohort of Subjects in Ilorin, Nigeria

Malaria and Hepatitis B virus (HBV) are among the most common infectious diseases in Nigeria and other developing countries. Their high prevalence as mono-infections brings to the fore their infectious ability as co-infections.

This study was undertaken to assess the prevalence and effect of HBV and malaria infections on the liver function and hematological parameters in a cohort of subjects both as mono-infections and as co-infections.

Blood samples from 200 febrile patients were collected and analyzed for the presence of HBV surface antigen (HBsAg) and malaria infection. Hematological parameters and liver function tests such as bilirubin, albumin, alkaline phosphatase (ALP), aspartate aminotransferase (AST), and alanine aminotransferase (ALT) were carried using automated systems. Malaria parasite test was carried out using CareStart TM while HBsAg detection was done using MonolisaTM immunoassay. Descriptive statistics were carried out to ascertain the relationship between the prevalence of the infections and these parameters.

Individuals with HBV and malaria co-infection tend to have a higher level of changes in their disease conditions compared to those with mono-infections. Hence, there is a need for continuous monitoring of individuals presenting with febrile illnesses in the areas where HBV and malaria infections are co-endemic.

Hepatitis B virus (HBV) and malaria infections are endemic in most parts of Nigeria and Sub-Saharan Africa (1). HBV causes infectious diseases resulting in liver conditions that could be of immense danger to human health (2). HBV is known to infect about 2 billion persons across the globe with about 280 million chronic carriers of the virus (2). While HBV infection could sometimes be asymptomatic and transient in most individuals, it can cause short-term illnesses in some people and result in chronic infections in others (3). Malaria is another infectious disease plaguing developing countries and Sub-Saharan Africa. About 212 million cases and 429000 deaths occurred in 2015 alone because of malaria (4).

Malaria is endemic in Nigeria with the disease accounting for about 60% of outpatient visits to clinics and health facilities. 132 billion Naira is said to be lost annually in Nigeria because of malaria (12). The presence of malaria has been shown to be a risk factor contributing to the prevalence of other infections or diseases (13). The presence of HBV and malaria co-infection is usually predominant in areas where both infections are endemic as mono-infection (14). HBV and malaria are known to share some of their developmental stages in the liver, which has sometimes been attributed to the poor clearance of the liver stage of the malaria parasite (15).

Co-infection of Malaria and HBV may occur in areas where both infections are endemic and because of their geographical coincidence (14, 16). These two infections share some of their developmental stages within the liver, which may cause an impaired clearance of the liver stages of Malaria parasite due to hepatocytes damage in HBV infection (15, 17). Individually, malaria parasite infection causes changes in hematological parameters while HBV infection causes changes in liver function indices. Despite that, a few kinds of literature have studied the effect of HBV and malaria co-infection in a cohort of the subject. This study thus aimed to establish if any, significant changes in the liver function indices and hematological parameters in a cohort of subjects, both as mono-infection and as co-infection.

This was a cross-sectional descriptive study carried out among a cohort of febrile subjects, attending General and Specialist Hospitals in Ilorin Kwara state, above the age of 17 years who gave their consent to participate in the study. A structured closed-ended questionnaire was administered to these subjects after an informed consent form had been filled, followed by the collection of blood samples.

Subjects were recruited randomly from a cohort of febrile patients attending the study hospitals. As part of the inclusion and exclusion criteria, subjects recruited had not been tested for HBV in the past.

This study was conducted in three different areas of Ilorin that were East, West, and South, Kwara State, Nigeria.

Patients were bled from the antecubital vein using 5 mL syringes. Three (3) mL of blood was transferred into clean dry bottles, allowed to clot, and centrifuged at 3000 rpm for 5 min. The supernatant (serum) was then collected and kept in clean, dry cryo bottles and stored in a deep freezer at -70 °C. It was removed only when needed. 2 mL of blood was poured into EDTA bottles, mixed to avoid clotting, and used for Malaria parasites and Full blood count.

CareStart TM Malaria HRP (pf) with a sensitivity and specificity of 95% was used for the rapid qualitative detection of malaria HRP2 (Histidine-rich protein 2) in human blood as an aid in the diagnosis of malaria Plasmodium falciparum infection. The test procedure was made using blood samples from EDTA bottles where five microliters (5µL) of blood was added into the “S” well and 3 drops of assay buffer solution added into the “A” well. A start timer was set for 20 min and results were read visually.

Serum samples kept in a freezer at -70°C were thawed at room temperature for 20 min before the assay procedure. Serum samples for study participants were screened for HBsAg using a MonolisaTM HBsAg ULTRA kit (with a specificity of 99.28% and sensitivity of 100%) by the Enzyme Immunoassay (EIA) technique. This technique is a qualitative one-step enzyme immunoassay based on the principle of “sandwich” type using monoclonal antibodies and polyclonal antibodies selected for their ability to bind themselves to the various subtypes of HBsAg. The cut-off (CO) value was determined with the negative control, by calculating the mean measured absorbance value for the four negative controls. The cut-off value becomes the mean of negative control +0.050. The presence or absence of HBsAg was determined by comparing the registered absorbance to the calculated cut-off value for each sample.

Samples with an optical density (OD) value lower than the cut-off value were considered negative (ratio < 1) by MonolisaTM HBsAg ULTRA.

Descriptive analysis using SPSS 21 was used to describe the mean, frequency, standard deviation, standard error, correlation, and percentage. Graphs and chats were also used in order to have a lucid representation of data. 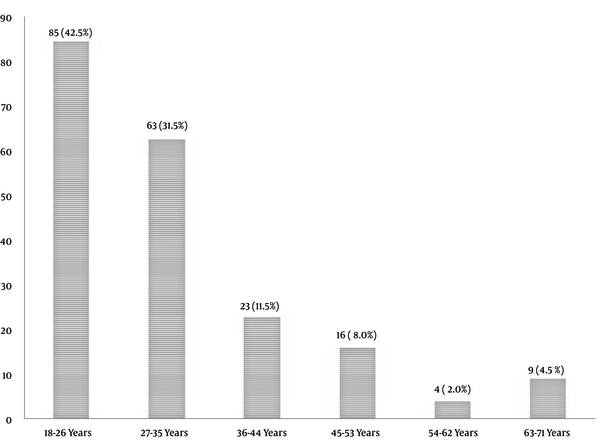 Age Distribution of the Study Population

Table 3. Hematological Parameters of Subjects with HBV and Malaria Co-infection

Hepatitis B virus has been implicated largely in cases of liver diseases, resulting in lots of deaths worldwide. It is a major cause of chronic liver disease and hepatitis, with chronic hepatitis accounting for 620000 deaths per year (18). In addition, the presence of malaria and HBV co-infection has been known to influence the progression of either malaria, hepatitis, or both diseases (15). The results of this study clearly showed that young adults between the ages of 18 - 26 years participated most in this study. The socio-demographic characteristics of the study population were as seen in similar settings where the study was carried out. While females were more frequent (128, 64%), the educational level of the respondents varied across the different age groups. Similar results were shown by Udeze et al. (9).

The results of this study further showed that individuals that were seropositive for HBV antigen mono-infection did not have major changes in their liver function indices. No significant difference was found between the prevalence of HBV and changes in the levels of ALT and AST among the subjects. However, a significant difference was found between the level of alkaline phosphate and the prevalence of subjects who were positive for HBV. In addition, no significant changes were found in the subjects’ bilirubin and conjugated bile concerning the prevalence of HBV. Contrary to this study, Du et al. (25) showed a significant change in bilirubin level among a cohort of Chinese subjects. The high level of liver bilirubin is usually associated with liver injury (25). In addition, Dixit et al. (26) showed significant changes in liver function indices among subjects with hepatitis B virus infection. However, these subjects had chronic hepatitis B virus infection albeit asymptomatic. Liver function test (LFT) abnormalities have been shown to occur in Nigeria in subjects with chronic liver disease or with liver infection occurring as a co-infection with other diseases.

Copyright © 2018, International Journal of Infection. This is an open-access article distributed under the terms of the Creative Commons Attribution-NonCommercial 4.0 International License (http://creativecommons.org/licenses/by-nc/4.0/) which permits copy and redistribute the material just in noncommercial usages, provided the original work is properly cited
2019-05-25 08:41:44
Good work.its quite striking that not all the subject are positive for malaria.