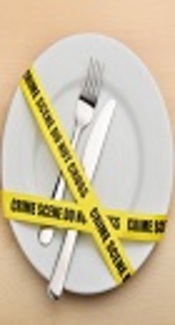 The problem of food borne infectious disease is common in several topical developing countries. There are several kinds of infections in this group. Well-known infections include fish borne infections, chicken borne infection, pig borne infections, and cow borne infection. However, in real life, there are also many strange traditional foods of local people in developing countries, especially for those living in tropical regions. In Asia, there are many traditional ethnic local foods. Strange examples are insect dishes, worm dishes, and reptile dishes. Snake is a reptile that can be seen in tropical countries and it is sometimes eaten as food. Snake borne infectious disease can be seen due to the mentioned traditional foods yet it is less mentioned in the literature. An important infection is sparganosis, which can be due to intake of poorly cooked snake meat. Focusing on sparganosis, although it can be due to other modes of transmission (such as drinking of contaminated water or using contaminated meat as skin poultice), intake of contaminated meat is a common but forgotten mode of transmission (1, 2). The clinical manifestation can be seen at any organ system as parasitic mass (such as ocular sparganosis and subcutaneous sparganosis) (1, 2). The diagnosis is difficult and usually due to histological examination of the pathological specimen.

Currently, snake dishes can be seen and common in many countries (3). The common areas that consume snake are Southeast Asia and south China and the problem of snake-borne infectious disease is common in this area. According to a recent report from China, Lu et al. showed that the main risk for sparganosis, changes from “application of frog flesh as a poultice” to “consumption of raw snake meat” (4). The survey of snake meat showed high contamination of parasite in several parts (muscular tissue, subcutaneous tissue, and in the coelomic cavity) (5). As noted by Magnino et al., “the feeding of farmed reptiles with non-processed and recycled animal products is likely to increase the occurrence of biological hazards in reptile meat” (6). Nevertheless, the farming for snake can be seen in only some areas. The actual situation in several areas, especially Indochina, is that snake meat is naturally derived. The food sanitation control of snake meat is rarely mentioned and it should be a topic in food safety at present.

Copyright © 2018, International Journal of Infection. This is an open-access article distributed under the terms of the Creative Commons Attribution-NonCommercial 4.0 International License (http://creativecommons.org/licenses/by-nc/4.0/) which permits copy and redistribute the material just in noncommercial usages, provided the original work is properly cited
download pdf 65.35 KB Abstract XML Get Permission (article level) Import into EndNote Import into BibTex
Number of Comments: 0