Optimization and Molecular Detection of Neuraminidase Gene in Listeria monocytogenes 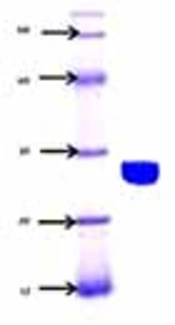 Listeria monocytogenes is one of the human pathogenic microbes causing Listerosis and is usually found as a contaminant in many foods and dairy samples. Neuraminidases (NAs) plays a key role in many pathogenic bacteria and has the ability to block sialic acid (a virulence factor) that targets mucosal surfaces.

In the current study, NA or sialidase-producing Listeria monocytogenes were screened from different milk samples of cow.

The prevalence of Listeria species was found to be around 4.16%. Sialidase enzyme was found to be produced in high amounts in isolated L. monocytogenes. Furthermore, NA was purified by ammonium sulphate precipitation and gel filtration techniques. The partially purified sialidase enzyme possessed a molecular mass of 27.0 ± 1 with an isoelectric point of 7.6. The optimum pH and temperature were 4.6 to 8.2 and 30 to 35°C, respectively. The enzyme had no effect on metal ions, such as Mn+2, Zn+2, and Ca+2, whereas Hg+2 and Al+3 had potentially acted as inhibitors.

This study suggests that the sialidase of L. monocytogenes plays a significant role in its pathogenesis.

Listeria monocytogenes is an opportunistic pathogen causing Listeriosis and is found abundant in the environment (1). It is a Gram-positive microbe and has been isolated from decaying vegetables, dairy products, meat, seafood, human, and animal carriers (2). Infection with Listeria is more common in elderly individuals with low immunity, pregnant females, and newborn infants, and might lead to abortions in females, septicemia, encephalitis, meningitis etc. (3). The pathogenesis of L. monocytogenes is mainly due to the presence of virulence factors or islands, which are regulated by PrfA protein, listeriolysin O (hly), actin polymerization (actA), internalins (inlA, inlC and inlJ), and invasion-associated protein (iap) (4, 5). However, the pathogenesis and physiology of Listeria infection are poorly understood in animals and humans (6).

Another important virulence factor for pathogens is Neuraminidases (NA), which targets mucosal surfaces. Many strains of Pseudomonas, Streptococcus, Clostridium, and Influenza virus have the ability to produce NA that cleaves sialic acid (SA). Prokaryotes have a predominant Sialic acid (terminal carbohydrate), which is derived from an N-acetylneuraminic acid (Neu5Ac) (2). Furthermore, SAs are found as a functional signalling molecule due to its structural diversity and electronegative charge, and displays host defence against pathogens (7). Sialidases break down the sialic acid and mask the enzymatic interactions in the host (8). The role of sialidases in sialic acid metabolism has not so far been elucidated in L. monocytogenes. The SAs are found to have a crucial role in innate immune response, which includes activation of monocytes, T- lymphocytes, dendritic cells, and endothelial cells (9). Furthermore, they also aid in unmasking the binding sites and provide nutrients to some microbes (10).

The mode of action of sialidase enzyme is of great significance as it enhances virulence by allowing SA-producing bacteria to bind to host cell membranes (8). The mucosal barrier is disrupted and allows the bacteria to grow and thereby play an important role in invasion and infection (11). To date, trans-sialidase have been abundantly found in trypanosome species, involved in cell invasion by scavenging SA (7). In the current study, the NAs from L. monocytogenes were purified and the stability of this protein was monitored.

Five isolates of L. monocytogenes were obtained from raw milk samples (n = 120) of cow. One millilitre of milk sample was serially diluted and plated on Listeria enrichment agar (Himedia Laboratories, LLC) and incubated at 37°C for 18 hours. A single colony with greenish-blue coloration was selected and inoculated in selective broth containing cycloheximide and nalidixic acid for further experiments (12). Nutrient agar slants were prepared and the selected strain was streaked, and before storing at 4°C, they were allowed to grow at 37°C for 18 to 24 hours.

The selected isolates were microscopically examined and subjected to conventional biochemical tests, which include, gram-staining, catalase, oxidase, and β-hemolysis. Furthermore, carbohydrate fermentation test was performed with different sugars, such as sucrose, mannitol, rhamnose, maltose, inositol, xylose, fructose, and lactose, as described previously by Janzten et al. (13). The molecular detection of L. monocytogenes was performed by using hemolysin gene (hlyA) species-specific primers. The bacterial genomic DNA from the native L. monocytogenes and ATCC 19155 was extracted using the Quick-g DNATM miniprep kit (Zymo Research, SA). The protocol for the isolation of the genomic DNA was performed as described by the manufacturer. The hlyA gene was amplified by using the primers F-5’CGGAGGTTCCGCAAAAGATG3’ and R-5’CCTCCAGAGTGATCGATGTT3’. The PCR was performed as described by Khan et al. (14), and an amplicon size of 234 bp was considered as a positive result.

Different sialidase genes were retrieved from NCBI database and BLAST (Basic Alignment Search Tool) search. The homologous gene was identified in the genome of L. monocytogenes. Multiple alignments of SA gene was performed by the ClustalX program. Primers were designed to amplify the sialidase gene among L. monocytogenes. The following PCR conditions were used to obtain a product size of 432 bp with the primer pair, SA-F5’GGCTTCAGGCTATTA3’ and SA-R5’GTTTTCCACGTC TTC3’. The PCR reaction was carried out with 1X PCR buffer, 200 µM dNTP mix, 10 pmol of each primer, 2 mM of MgCl2, and 1U of Taq DNA polymerase (Sigma Aldrich, USA) in a 25-µL reaction volume. The PCR program was performed with the following thermal conditions: 95°C for five minutes, followed by 35 cycles at 95°C for 30 seconds, 58°C for one minute, 72°C for one minute, and a final extension at 72°C for 10 minutes. The obtained amplicons were run at 1% ethidium bromide stained agarose gel and a product size of 432 bp was obtained. The amplicon was purified by gel purification kit (Qiagen, Germany) and subjected to sequencing by sanger’s method. The BLAST search analysis of the obtained nucleotide sequence data showed 98% homology to L. monocytogenes.

The sialidase purification was performed from native isolates by using the ammonium sulphate saturation method. The L. monocytogenes was grown in Listeria enrichment broth for 24 hours at 37°C under 200 rpm shaking conditions. Later on, the cell-free supernatant was collected and was saturated with ammonium sulphate. The obtained precipitate was subjected to dialysis against 10 mM Tris-HCl buffer (pH 7.4) at 4°C. The dialyzed sample was loaded on to ion-exchange chromatography on DEAE cellulose (Whatman, England). The fractions were collected (2 mL each) and the sialidase activity was determined in each sample. The active fraction was stored by lyophilization. The obtained protein was estimated by the Bradford method, as described previously (15).

2.5. Monitoring the Release of Sialidase Gene in L. monocytogenes

The release of trans-sialidase gene was monitored by growing L. monocytogenes in the culture medium containing 4-methylumbelliferyl α-d-acetylneuraminic acid (MU-NANA) (a substrate), as described previously (16). Samples were aliquoted every 10 minutes for one hour. The amount of sialidase released was monitored through UV spectrophotometer at 360 nm wavelength. Briefly, 50 μL of sample, 50 μL of MU-NANA (1 mg/mL) was added to 100 μL of 0.1 M phosphate buffer (pH 6.5). The reaction mixture was allowed to react and incubated for one hour at room temperature. The reaction was stopped by adding 100 μL of 0.2 M borate buffer (pH 9.0). The absorbance was determined at 360 nm wavelength in UV spectrophotometer. One unit of enzyme activity was defined as “the amount of enzyme, which produced 1 μmole of N-acetylneuraminic acid per minute under the described assay condition”.

2.6. Optimization of pH and Temperature of Trans-Sialidase

To determine the optimal pH, the reaction was carried out using 4-methylumbelliferyl α-d-acetylneuraminic acid (MU-NANA), as a substrate with selected buffers such as 0.1 M of sodium phosphate buffer (pH 3.0, 4.0, 5.0 and 6.0) and acetate buffer (7.0, 8.0, 9.0 and 10.0). The reaction was carried out at 37°C for one hour and was terminated by using a stop buffer (0.2 M borate). The absorbance was taken at 360 nm against the substrate blank and sterile distilled water was added instead of MU-NANA.

For temperature effect, the reaction was carried out at 20, 30, 40, 50, 60, 70 and 80°C against 4-methylumbelliferyl α-d-acetylneuraminic acid (MU-NANA), using optimum pH of four. The sample mixture was incubated for one hour at the selected temperatures and the reading was noted at 360 nm after stopping the reaction with 0.2 M borate.

2.7. Effect of Metal Ions and Surfactants on Trans-Sialidase Enzyme

The effect of metal ions on trans-SA was measured by using 5 mg of purified protein in 20 mM of Tris-buffer pH 8.0, and 2.5 mM of Ca+2, Mg+2, Ag+2, Mn+2, Hg+2, Al+3, and Zn+2. Enzyme activity in the absence of metal ions was used as a control and assayed under standard conditions. The metal chelating agents, such as sodium lauryl sulphate (SDS), and surfactants, such as Tween 20, 40, and 60 were used at a concentration of 0.5% on the partially purified sialidase enzyme. The experiment was performed in triplicates and mean percentage was calculated.

Food safety and quality are of prime importance and the detection of foodborne pathogens, especially Listeria, is a fundamental objective of the current study. In the current analysis, 4.16% of raw milk was found to be contaminated with Listeria species. A total of five L. monocytogenes were isolated and confirmed with their biochemical and morphological characteristics. The selected isolates were found to be Gram-positive rods, catalase positive, and oxidase negative. These isolates were able to produce acid and no gas on fermentation with carbohydrates, such as xylose, rhamnose, lactose, and maltose. None of the strains were able to ferment mannitol and inositol. On sheep blood agar, the selected isolates showed strong β-hemolytic activity. The prevalence of Listeria contamination was noted in ready-to-eat foodstuffs of Austria. Furthermore, it was observed that 19.4%, 5.5%, and 6.3% of seafood, soft cheese, and meat sausages were contaminated with different species of Listeria (17). Similarly, 21.2% of raw milk samples were found contaminated with Listeria sp., which were isolated form Turkey (18). 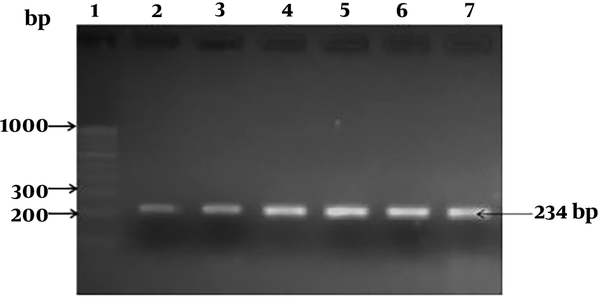 3.2. Screening and Detection of Neuraminidase Gene from L. monocytogenes

It has been reported that several virulence genes such as hlyA, inlA, iap, etc. are the main cause of pathogenesis in L. monocytogenes strains. However, the microbial pathogenesis in some of the pathogens has also been deduced by the presence of neuraminidase enzymes (10). In the current study, the NA-producing L. monocytogenes were screened, and had the ability to cleave sialic acid. The specific primers designed for NA gene were amplified in five isolates of L. monocytogenes (Figure 2) and product size of around 432 bp was obtained. Many reports suggested that sialidase activity or neuraminidase activity play a crucial role in infection and inflammation in the host (9). The NA activity was detected in four isolates (Table 1). 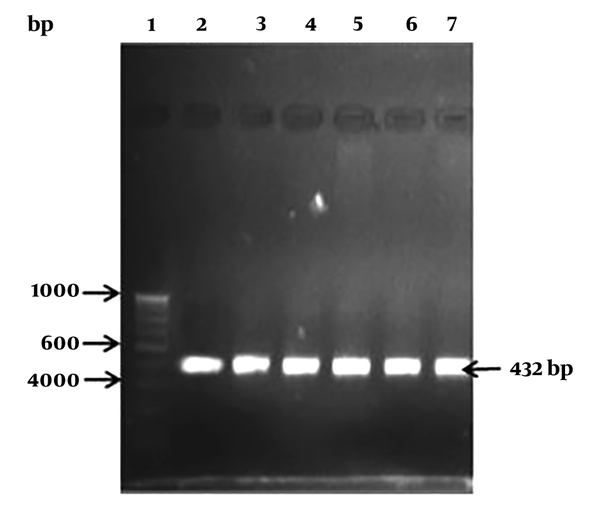 The isolate L-14 of L. monocytogenes possessed 32 U/mL of high activity after 48 hours of incubation with the substrate. The current work establishes the presence of NA gene in L. monocytogenes. Warwas et al. (20) has noted the presence of NA gene through PCR-based detection in Clostridium chauvoei. Similarly, trans-sialidase has been identified in Trypanosoma cruzi by designing specific primers for NA gene (21). 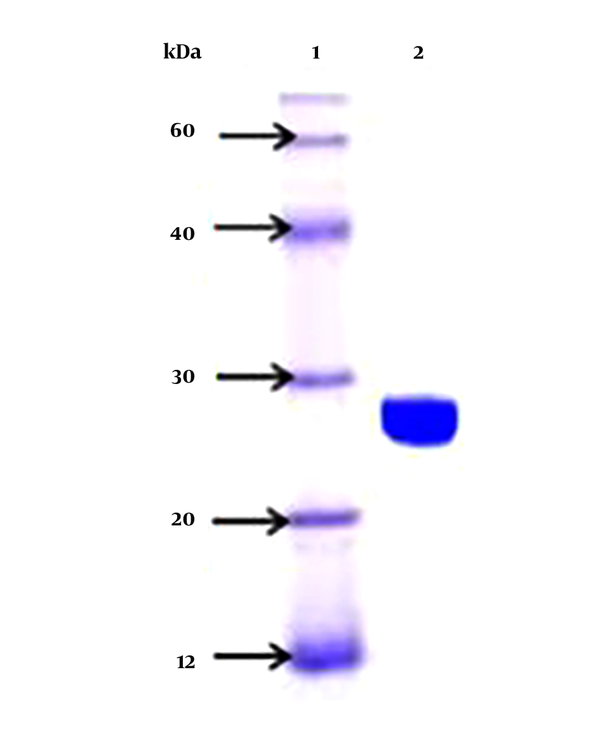 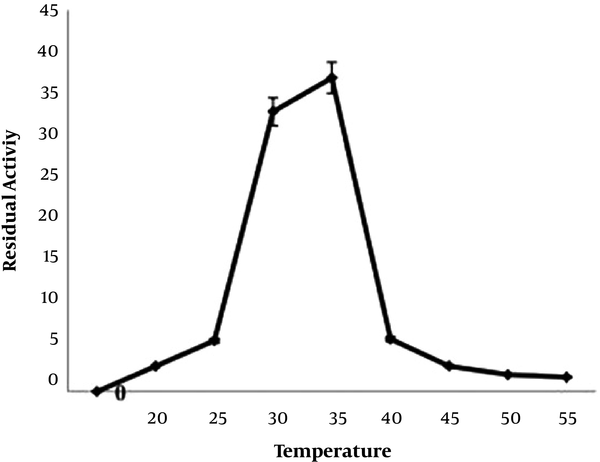 Figure 4. Effect of temperature of the purified sialidase enzyme 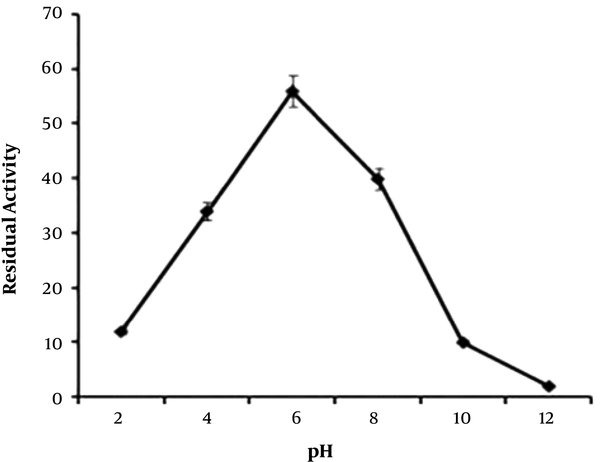 Figure 5. Effect of pH of the purified sialidase enzyme

The effect of metal ions on SA enzyme was assessed and it was observed that Hg+2 and Al+3 inhibited the activity, whereas, Mn+2, Zn+2, and Ca+2 had no effect on the enzyme. Detergents like Tween 20, Tween 40, Tween 80, and SDS resulted in 4% to 20% increased enzyme production (Table 2).

Table 2. Effect of Metal Ions and Surfactants on Sialidase Enzyme

Copyright © 2018, International Journal of Infection. This is an open-access article distributed under the terms of the Creative Commons Attribution-NonCommercial 4.0 International License (http://creativecommons.org/licenses/by-nc/4.0/) which permits copy and redistribute the material just in noncommercial usages, provided the original work is properly cited.
COMMENTS