High Prevalence of HTLV-1 Infection Among Hemodialysis Patients in Neyshabur, Northeast of Iran 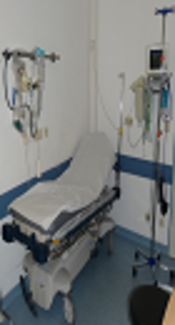 Human T-lymphotropic virus type 1 (HTLV-1) infection has known to be endemic in various regions of the world, including northeastern Iran.

This study aimed to determine the prevalence of HTLV-1 infection and its related factors among hemodialysis (HD) patients in Neyshabur, northeast of Iran.

Serum samples of 138 HD patients were screened for HTLV-1 antibodies using enzyme-linked immunosorbent assay, and seroreactive samples were confirmed by a line immunoassay.

The prevalence of HTLV-1 infection among HD patients in northeastern Iran was considerably higher than that reported from other endemic areas. It seems that more specific preventive measures are required to be applied by local health authorities to control the infection.

Furthermore, several clinical conditions such as autoimmune disorders, opportunistic infections and tumors are considered to be possibly associated with this virus (3). However, a large proportion of infected individuals remain asymptomatic during their whole lives.

HTLV-1 transmission mainly occurs through the transfer of infected blood cells, unprotected sexual contact and mother to child primarily by breastfeeding (4). Patients undergoing hemodialysis (HD) are one of the high-risk groups for HTLV-1 acquisition due to their frequent requirement for blood transfusion (5).

Historically, HTLV-1 was distributed as clusters in some parts of Iran. The prevalence rate of the infection in the general population of Mashhad, northeast of Iran, was reported at 2.12% (6). Neyshabur, another large city in this area, has also been introduced as another endemic area for this infection (7). In a recent study, the overall seropositivity rate for HTLV-1 was found to be 6.55% among healthy individuals from this city (8). On the other hand, the frequency of this infection among HD patients in this area has not been reported yet.

This study was conducted to determine the seroprevalence of HTLV-1 infection among HD patients in Neyshabur, northeast of Iran. In addition, the demographic characteristics that might be related to this infection were assessed.

In this cross-sectional study conducted during July - August 2012, we enrolled all the 144 patients who regularly visited the Dialysis Ward of 22-Bahman Hospital in Neyshabur, Iran. This study was approved by the Academic Center for Education, Culture and Research (ACECR), Khorasan Razavi Branch, for methodological and ethical issues (No. 92/48/3074). A consent form was obtained from all the patients; for a patient under the age of 16 (a 12-year-old boy) written consent was obtained from his parents. We obtained 5 mL of venipuncture blood, and the serum was separated and stored at -20°C until further assays. Demographic characteristics such as age and gender were documented.

From 22 dialysis machines in the ward, two were used for three known cases with hepatitis B surface antigenemia and one was used for an HCV-positive patient in isolated rooms during the study time. There was no positive case of HIV infection among the patients.

Twenty (14.49%) patients showed seroreactivity to the antibodies, all of which were surprisingly confirmed by the line immunoassay. Therefore, the overall prevalence of HTLV-1 infection among HD patients was 14.49%. The frequency of the infection among females was higher than that among males (19.35% vs. 10.53%). However, this difference was not statistically significant (P = 0.143). In addition, the rate of HTLV-1 infection was significantly higher in older patients. It is worth mentioning that the rates of infection among individuals younger than 50, 50 - 64 and 65 years or above were 6.0%, 13.64% and 25.58%, respectively (P = 0.028).

In the present study, HTLV-1 seroreactivity was observed in one-seventh of the HD patients from Neyshabur, northeast of Iran. This considerably high prevalence of the infection in this group can be attributed to two reasons. First, some surveys introduced northeastern Iran as a highly endemic area of HTLV-1 infection (6, 7, 9). In our previous survey in 2011 (7), about 7% of individuals referred to a large medical lab in Neyshabur city were reported to show serologic evidence of HTLV-1 infection. Also, a study on young women in Neyshabur showed that HTLV-1 and HTLV-2 had a prevalence of 2.04%. The highest prevalence was in women aged 38 to 39 years (4.16%) (10). On the other hand, HTLV-1 infection is expected to have a lower prevalence among HD patients from non-endemic parts of Iran. A study performed in Tehran among HD patients (24 to 88 years old) showed that the prevalence of HTLV-1 was 0.66% (one positive case among 150 patients) (11). In a study conducted in Mazandaran, an area with very low incidence of HTLV-1 infection in north of Iran (12), only 0.6% of HD patients showed seropositivity for this infection (13). Furthermore, no HD patients demonstrated HTLV-1/2 seroreactivity in Bushehr, southwest Iran (14), where only 0.013% of blood donors were shown to be HTLV-1-positive (15). In addition, in one study by Khameneh et al. 0.34% of blood donors and 1.05% of HD patients in Urmia, northwest Iran, showed to be seropositive for HTLV-1 (5). Similarly, in one study from Japan, 21.2% of HD patients in Okinawa with a high HTLV-1 endemicity had a positive serology for this infection. However, the prevalence of the infection was as low as 1.1% in Chubu, a non-endemic area for HTLV-1 (16).

The second potential reason for the high frequency of HTLV-1 infection in HD patients could be that they sometimes receive multiple blood transfusions due to dialysis process. Our studied group had a long average history for dialysis (around four years), which could pose a great chance for the infection acquisition. Like patients with thalassemia and hemophilia, HD patients are specifically predisposed to acquiring transfusion-transmitted infections (17). Regarding HTLV-1, a higher prevalence of the infection was reported among poly-transfused patients compared to healthy population from several provinces of Iran (5, 18-20). Approximately, 7% of thalassemia patients and 6.5% of individuals under hemodialysis in Charmahal-Bakhtiari, southwest Iran, had a positive test for HTLV-1, while only 0.6% of a healthy group were found to be HTLV-1-infected (19). A study conducted by Ahmadi Ghezeldasht et al. in 2015 showed that the prevalence of HTLV-1 was 5.9% among hemodialysis patients in Khorasan Razavi province (21).

The prevalence of HTLV-1 infection among HD patients in northeastern Iran was considerably higher than that reported from other endemic areas. It seems that more special preventive measures such as isolated dialysis machines are required to be adopted by local health authorities to control the infection. In addition, investigating the prevalence of this infection among other high-risk populations such as patients with thalassemia and hemophilia in this area is strongly recommended.

The authors wish to thank the staff of the ACECR laboratory, and the personnel of 22-Bahman Hospital in Neyshabur for their kind assistance.