Prevalence of Hepatitis B Serological Markers Among People Who Referred to a Great Laboratory in Neyshabur, Northeast of Iran 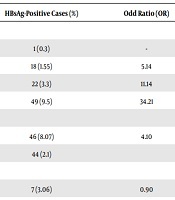 Iran has been known as an area with low-intermediate prevalence for the hepatitis B virus (HBV) infection.

This cross-sectional study was performed to assess the prevalence of serological markers and the potential risk factors of HBV infection among people who referred to the Neyshabur Lab of Academic Center for Education, Culture, and Research (ACECR), Razavi Khorasan Branch, northeast of Iran.

Prevalence of HBV infection in Neyshabur could be considered as an intermediate level. Although some reasons for which individuals referred, were suggesting hepatitis.

Nonetheless, there are few data on the HBV seroprevalence and the related risk factors of hepatitis B among the general population in Northeastern Iran. A population-based study by Fathimoghaddam et al. (9), showed that the overall prevalence of HBsAg seropositivity in Mashhad is 1.4%; the prevalence among males and females were 2.0% and 0.9%, respectively. The infection was more prevalent in older and married persons and those with a history of traditional cupping.

The present study aimed to evaluate the prevalence of serological markers and potential risk factors of HBV infection among individuals who referred to a great medical diagnostic center in Neyshabur, northeast of Iran.

This cross-sectional study was performed in the medical lab of the Academic Center for Education, Culture, and Research (ACECR) in Neyshabur. All persons who referred to test HBsAg seropositivity were enrolled. No specific criteria were considered to include in or exclude from the study. Totally, 2669 individuals were surveyed during June 2015 to February 2016.

After obtaining informed consent, all participants were interviewed in detail, and the data were recorded in a prescribed questionnaire. These included; age, gender, marital status, residence place, ethnicity, household size, education, income, and histories of blood transfusion, hospitalization, surgery, dentistry procedure, traditional cupping, and tattoos as well as the reasons of requesting HBsAg test.

The HBsAg was detected by enzyme-linked immunosorbent assay (ELISA) method (DSI s.r.l., Italy) and all reactive samples were analyzed to detect other markers of HBV infection, using ELISA commercial kits, according to manufacturers’ companies. These included HBeAg, anti-HBe, total anti-HBc (Dia.pro, Italy), and IgM anti-HBc (General Biological Crop., Taiwan). This study was approved and supervised by a scientific board in ACECR, Razavi Khorasan Branch, regarding methodological and ethical issues (ACECR 93.48.1707).

Screening of HBV infection during pregnancy (51.2%) and routine medical check-up (29.4%) were the most common reasons for which the participants were referred to test serum HBsAg (Table 1).

Table 1. Reasons of Hepatitis B Surface Antigen Screening Among Individuals Referred to the ACECR Lab in Neyshabur (N = 2,669)

aTotal anti-HBc test was positive in all cases.

Expectedly, HBsAg seropositivity was more prevalent in people who referred because of having some clinical or lab evidences of hepatitis or in those with a positive family history of HBV infection (42/359; 11.70%) than pregnant women, candidates for an operation, individuals who requested a routine check-up, and those who applied a visa (48/2310; 2.08%) (P < 0.001).

The data demonstrated a growing trend in the prevalence of HBV infection with increasing participant’s age (P < 0.0001). Furthermore, gender (P < 0.0001), household size (P < 0.0001), and educational level (P < 0.0001) were significant demographic risk factors of HBsAg seropositivity (Table 3). On the other hand, HBsAg seropositivity were not associated with marital status, residence place, ethnicity, and income. As illustrated in Table 4, none of the risky procedures such as blood transfusion, hospitalization, surgery, dentistry procedure, traditional cupping, and tattooing had a significant association with HBsAg seroreactivity.

Iran has been known as an endemic area of HBV infection with an intermediate level (2% - 7%) (10). The current study showed the same level of the infection prevalence (3.37%) in a non-random sample of the population from Neyshabur, northeast of Iran.

Among persons with HBsAg positivity, 8.9% showed HBeAg positivity that reflects active hepatitis and high infectivity. These patients are at increased risk of cirrhosis and hepatocellular carcinoma, which impose a heavy burden on the public health system (11).

Although this population is not representative for the general population, in the present study, the prevalence of HBV infection was considerably higher than that estimated among the general population of the country (2.14%) (8). The higher hepatitis B infection rate in our study is completely expected because a part of them had some clinical or lab evidence suggesting hepatitis, and some had a positive family history of HBV infection.

Furthermore, a survey in 2012 reported a much lower prevalence of HBV infection (0.75%) in Kermanshah, west of Iran. Predictors of HBsAg over multivariate analysis were old age, being male, history of tattooing, and history of the dental procedure (11). These results are in agreement with our study in terms of being aged and male, whilst other risk factors could not consider as a predictor of HBV infection.

Our result cleared a significant relation between HBV infection and participant’s age, gender, educational level, and household size. The HBsAg prevalence in young adults vaccinated against HBV as the first group of Iranian neonates during 1993 and 1994 had investigated by Saffar et al., in 2014 (15). They found neither HBsAg positive nor symptomatic hepatitis cases. Similarly, Alavian et al. (11), showed that age and gender are major risk factors of HBV infection in Kermanshah province, west of Iran. Moreover, a population-based study in Mashhad reported a higher prevalence of HBsAg positivity among males than females and demonstrated a rising trend in the prevalence with an increase of participants’ age (9). In addition, Merat et al. (16), showed that older age, high school education, and living in a rural area had a significant relation with HBV infection. On the other hand, Fathimoghaddam et al. (9), could not find any association between HBV infection and literacy and household size.

We have previously surveyed the HBsAg prevalence among people older than five years in Neyshabor between 2011 to 2015, in which the results demonstrated 4.11% of people suffer from HBV infection (17). Similar to the current report, there was a significant relationship between HBV infection and demographic factors of age and gender. In addition, we showed a higher prevalence in the previous five years in Neyshabur, which accordingly, we can claim the rate of infection decreased by the passage of time (17). Our another study (18), demonstrate that 1.09% of pregnant women were positive with HBsAg.

Based on the global hepatitis report, 2017, all countries should seize the opportunities to eliminate viral hepatitis as a public health threat by 2030 (reducing new infections by 90% and mortality by 65%) (19). The Polaris Observatory (TPO) Collaborators estimate the global prevalence of HBsAg in the general population by a modeling study in 2016. This study has reported, corresponding to 292 millions infections, that the global prevalence of HBsAg in 2016 was 3.9 % (20).

This survey could not show a significant relation between HBsAg positivity and some potential risky procedures and conditions such as blood transfusion, hospitalization, surgery, dentistry procedure, traditional cupping, and tattooing. Consequently, another study in Mashhad found no association between HBV infection and above-mentioned variables (except cupping) (9). In contrast, Alavian et al. (11), showed that the history of tattoo and dental procedures are important risk factors of HBsAg seropositivity in Kermanshah.

HBV infection prevalence in Neyshabur, northeast of Iran is considerably higher than that reported from several regions of the country. The higher hepatitis B infection rate in the current study is completely expected, due to the fact that some reasons for which individuals referred, were suggesting hepatitis. In spite of this fact, the implementing of efficient measures such as mass educational programs by local health authorities to control infection is strongly recommended.

The authors wish to thank the staff of Neyshabur Lab of ACECR, Razavi Khorasan Branch, Iran, for their kind assistance.