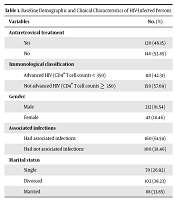 Evaluation of Factors Related to Survival Time in HIV-Infected Persons in Mashhad, Iran, Between 1994 - 2014: A Bayesian Joint Model

The prevalence of HIV is increasing in Iran, so obtaining an estimate of the survival of HIV-infected persons can be helpful to prevent and control this infection.

This research aimed to use the Bayesian joint model by which identifies factors associated with the survival and determine the relationship between the trend of CD4+ T cell counts and survival time in HIV-infected persons.

In this retrospective cohort study, we collected HIV/AIDS surveillance data from Mashhad’s Counseling Center of Behavioral Diseases in the province of Khorasan Razavi, Northeast of Iran, during 1994 - 2014. Data collection included variables CD4+ T cells count, survival time, and other related factors. We used the Bayesian joint model to estimate the survival time and identify the factors associated with survival time in HIV-infected persons.

HIV can transmit in many ways e.g. unprotected sex, infected blood transfusions, and infected needles, from mother to baby in the period of pregnancy (vertical transmission), childbirth or lactation (4). The ways of transmission are different among countries. In 2017, most HIV cases in the United States occurred for homosexual men (66% of total lately diagnosed) (5). In some countries, HIV is more prevalent in cities because of the stress, urban lifestyle, and any other factors that provide opportunities for sexual activities (6).

The prevalence of AIDS has increased in the last decades. Approximately, 76.1 million people have suffered from HIV throughout the world and 35 million have lost their lives because of this virus (7). According to some reports, 36.9 million people have been living with HIV at the end of 2017 that included 35.1 million adults and 1.8 million children aged < 15 years (8). The prevalence of HIV is also increasing in Iran and the most common way of transmission is through the infected syringe among drug users (9).

Usually, in studies where information is gathered on both time to record data and repeated measures of biomarkers (longitudinal data), a separate analysis is conducted on each recorded outcome; however, in many occasions, interest may also lie in studying their association structure. For instance, in this human immunodeficiency virus (HIV) research, the interest lies in the association between CD4+ T cell counts and the time of survival for HIV-infected persons. Therefore, the use of a separate model for each outcome may be inappropriate and lead to incorrect conclusions because of the relationship between the two data components (12). When the survival and longitudinal process are associated, using the joint analysis of survival and longitudinal data can account for the measurement error in longitudinal data and provide fewer estimate bias and more efficient conclusions.

Previous studies showed that description of HIV-positive population is important in HIV management and effective antiretroviral treatment is different between countries (13). Therefore, it is essential to study the factors affecting survival time in HIV-infected patients in each country separately.

In 2018, Akbari et al. (13) assessed survival and associated factors among patients living with HIV/AIDS in Iran by the Cox proportional hazards model and showed gender, age, CD4 count, and antiretroviral therapy as the significant mortality risk factors. Other researchers, Baghfalaki et al. (14) in 2013, developed and implemented a robust joint model in a simulation study on HIV-infected patients and concluded that observation time and the previous infection had significant effects on CD4+ T cell counts and HIV patients’ survival time.

Because of the skewness in the CD4+ T cell counts variable, we first sought a proper transformation for this variable. The second root transformation seemed to appropriate because it showed to have a normal distribution. Parameters in the joint model were estimated under the Bayesian framework and implemented using Markov chain Monte Carlo (MCMC) methods. To compare many models with different random effect structures and different trajectory of time in the longitudinal sub-model, we considered the deviance information criterion (DIC) to choose the best model. According to the DIC criteria, the model with random intercept and quadratic time effect had the lowest DIC = 11417.66 and was considered to be the final model. All statistical analyses were performed using R software, version 3.4.1 with JM Bayes package at a significance level of 0.05.

The estimated association parameter in Bayesian joint model, an indicator of the shape and relationship of the two survival and longitudinal sub-models, was -0.217 (95% CI: -0.323, -0.136), which was statistically significant (P < 0.001). According to the estimated hazard ratio for association parameter (0.805) (Table 1), we can say the increase in the number of CD4+ T cells reduces the risk of death.

aSignificant factors at the level of 0.05.

Although there has been a great deal of progress in identifying pathogenesis and epidemiology of HIV, the number of HIV-infected people around the world are increasing substantially. In this study, we used the Bayesian joint model to investigate the association between the risk of death event and the change in CD4 biomarker that is repeatedly measured over time and to determine the factors associated with the survival of HIV-infected persons. Our results demonstrated that in the survival sub-model, gender and antiretroviral treatment and in the longitudinal sub-model, age, linear and quadratic time effect, and antiretroviral treatment were significant predictors.

Our study demonstrated antiretroviral treatment was a significant factor in the remaining time to death of HIV-infected persons and those who did not receive antiretroviral treatment were at risk of 3.476 (1/0.288) times compared to those who received treatment. This result is in agreement with other studies’ results implemented in Iran. Akbari et al. (13), accessed the survival and associated factors among people living with HIV/AIDS and showed that gender, age, CD4 count, and antiretroviral therapy were the significant risk factors in HIV patients’ mortality.

In the longitudinal sub-model, the intercept for CD4+ T cell counts was significantly different in HIV-infected persons because the subjects had different CD4+ T cell counts at the beginning of the study. Also, our findings indicated that time had a negative effect on CD4+ T cell counts, so with the increase of time, the CD4+ T cell counts were decreased. This result is consistent with the results of a study conducted in 2017 in the Amhara region (17). Based on their retrospective study that was conducted to evaluate the effective factors on the number of CD4+ T cells, variables such as time, age, marital status, gender, and immunological classification were reported to be significant.

Seid et al. (18) compared separate and joint model on HIV data. Their results of the joint model showed variables of time and gender in the longitudinal sub-model and gender, age, clinical stage and functional status in survival sub-model, which are in agreement with some of our results.

The estimated association parameter (α) in the joint model is statistically significant (P < 0.05). This indicates that there is strong evidence of an association between the effects of the longitudinal outcome with the risk of an event, implying higher values of the CD4+ T cells associated with longer survival.

Many studies that support the joint modeling of the longitudinal data and survival time emphasize the significant correlation between the longitudinal trajectory of the CD4 and the survival time of HIV-infected persons (19, 20). According to a study carried out by Lim et al. (20) in 2013, it was revealed that death hazard depended on the longitudinal process and number of CD4+ T cells can affect the risk of mortality in HIV patients.

There are some limitations to this study; first, the use of data recorded by registration centers do not allow the accuracy of the data to be verified and may provide information bias (21). Second, in the present study, owing to the lack of availability of measurements for other markers, only the effect of a longitudinal marker has been investigated, but considering more markers such as CD8+ T cell counts or viral load could provide more useful and accurate results. The strengths of the current study are that we were able to identify a series of variables that affect the progression of HIV and the factors associated with the death of HIV-infected persons using a Bayesian joint model.

We would like to appreciate the Mashhad's Behavioral Disease Counseling Center and Vice-chancellor of Research and Technology of Mashhad University of Medical Sciences for their approval and support for this study.

Copyright © 2019, International Journal of Infection. This is an open-access article distributed under the terms of the Creative Commons Attribution-NonCommercial 4.0 International License (http://creativecommons.org/licenses/by-nc/4.0/) which permits copy and redistribute the material just in noncommercial usages, provided the original work is properly cited.
download pdf 141.55 KB Get Permission (article level) Import into EndNote Import into BibTex
Number of Comments: 0