1 Laboratory of Parasitology and Ecology, Faculty of Science, Department of Animal Biology and Physiology, University of Yaoundé I, Yaoundé, Cameroon

4 National Committee for the Fight against AIDS, Bamenda, Cameroon

5 Center for Research on Filariasis and other Tropical Diseases (CRFilMT), Yaoundé, Cameroon 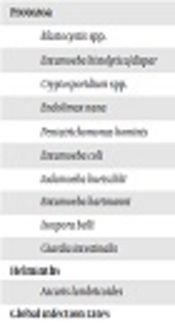 Depression of the immune system caused by the human immunodeficiency virus (HIV) promotes the onset of opportunistic infections including intestinal parasites.

In this study, we are comparing the prevalence of these parasitic infections among individuals infected with HIV (HIV+) and non-infected (HIV-) enrolled in four HIV care units in the Centre Region of Cameroon.

A cross-sectional study was conducted and stool samples were collected from 283 HIV positive subjects and 245 seronegative subjects. These samples were processed using direct wet mount, formol-ether concentration, Kato-Katz procedure, modified Ziehl-Neelsen staining, and Baermann techniques to identify both common and opportunistic intestinal parasites. Logistic regression analyses were used to assess the association between HIV infection and socio-demographics factors as well as infection with intestinal parasites.

A total of 123 (23.4%) individuals were found infected with at least one protozoan parasite species, and nine (1.7%) with intestinal worms. Overall, infection rates were 27.9% and 22.4% among HIV+ and HIV- subjects, respectively. The frequencies of Cryptosporidium spp. and Entamoeba histolytica/dispar were significantly more important among HIV+ subjects (P < 0.0455). Pentatrichomonas hominis and Entamoeba coli were significantly more prevalent among HIV- subjects (P < 0.0210). Heterogeneity was observed in the distribution of intestinal parasites, according to socio-demographic parameters. In addition, Cryptosporidium spp. was significantly associated with the decrease in CD4 cell count (P = 0.0035). The frequencies of infections with Cryptosporidium spp., Isospora belli, and Iodamoeba buetschlii were significantly more important in HIV positive patients not taking antiretroviral (P < 0.0226).

Infection with human immunodeficiency virus (HIV) is an important public health concern worldwide (1, 2). Depression of the immune system caused by this virus promotes the onset of opportunistic infections that accelerate disease progression to AIDS (3, 4). Among these opportunistic infections, intestinal parasites are ranked among the main agents responsible for chronic and severe digestive disorders (5-7). Indeed, coccidiosis (cryptosporidiosis, isosporiasis, cyclosporiasis) and invasive strongyloidiasis have been the most frequently found intestinal parasitic diseases associated with the genesis of digestive dysfunctions (8-10). Though antiretroviral triple therapy (ART) dramatically improved the control of HIV, its accessibility in Sub-Saharan Africa remains challenging with sometimes shortage of the medication, as a consequence of economic difficulties (11-13). Unlike ART, the treatments of intestinal parasitic infections are largely affordable for many patients, and are sometimes provided free of charge (14-17). Given the government’s efforts in the provision of antiretrovirals in the different care units and the decrease in the cost of generic antiparasitic drugs, one would expect a reduction in the frequencies of opportunistic intestinal parasites.

This study aimed at investigating the opportunistic character of intestinal parasites harbored by HIV infected patients in one of the most HIV affected regions in Cameroon.

3.1. Study Sites and Selection of Participants

The present study was conducted in the Centre Region of Cameroon where the prevalence of HIV (6.2%) is among the highest in the country (18). Three divisions (Mfoundi, Mbam & Kim, and Nyong & Mfoumou) with different levels of urbanization (urban, semi-rural/urban, and rural) were selected. The Mfoundi division is considered as an urban area, although some of its peripheral quarters are rural settings. Ntui and Akonolinga, respective capitals of Mbam & Kim and Nyong & Mfoumou divisions, are semi-urban/semi-rural cities (intermediate zones), though the constituting villages of these two divisions are rural (19). In addition to the urbanization criteria, these three divisions were also chosen because they have health facilities housing units for management of HIV patients.

Individuals eligible for this study were (i) both HIV positive (HIV+) and negative subjects (HIV-), (ii) aged one year and above, (iii) visiting the management unit (for HIV positive patients) or the counselling services for withdrawal of their HIV test results (for HIV negative individuals) of the targeted health facilities, and (iv) who had already spent at least one year in the study area. Only those who consented to participate in the study were enrolled. The recruitment of participants took place from July 2013 to September 2015, in the framework of a hospital-based cross-sectional study conducted in the Yaoundé University Teaching Hospital (CHUY), the Yaoundé Central Hospital (HCY), the Ntui District Hospital, and the Akonolinga District Hospital.

All relevant information regarding HIV status, socio-demographic factors, and clinical signs were collected through interview and consultation of medical notebooks of participants. The cluster of differentiation 4 (CD4) cell counts for three months’ follow-up were retrieved from the medical registers of HIV positive patients.

A plastic vial was provided to each enrollee for stool sample collection. These vials were returned back with fresh stools for subsequent analyses.

Samples were processed using different complementary approaches (20-22). Directs wet mount of stool with normal saline (0.9% NaCl solution), and lugol’s iodine staining were used for the diagnosis of protozoa and helminths. The Kato-Katz procedure and Formalin-Ether (10%) concentration technique were also used for helminths eggs identification and cysts/oocysts detection, respectively. Finally, the modified Ziehl-Neelsen technique was used for the detection of coccidian oocysts, and the Baermann technique, a larval concentration technique, was also performed for the detection of Strongyloides larvae.

All data relevant for this study were recorded into a purpose-built Microsoft Excel dataset and subsequently exported into PASW Statistics version 18 (SPSS Inc., Chicago, IL., USA) for statistical analysis. Prevalence were expressed as the percentage of infected individuals among the total number of individuals examined. The Pearson chi-square was used to compare prevalence between HIV infected and non-infected subjects, according to different covariates recorded in this study (socio-demographic characteristics and clinical status). Fisher exact probability test was used for small sample sizes. A binary logistic regression model was used to test the association between HIV status (response variable) and the different covariates listed above (explanatory variables). For all statistical analyses, the threshold for significance was set to 5%.

Table 1. Distribution of Participants According to Divisions

Table 2. Rate of Intestinal Parasitic Infections in the Study Groups

Ubiquitous parasites such as Blastocystis spp., Entamoeba histolytica/dispar, Cryptosporidium spp. and Endolimax nana were found in all settings. The frequency of Blastocystis spp. (10.9%) was higher in urban settings, while E. histolytica/dispar (10.5%), Cryptosporidium spp. (7.4%), E. coli (1.9%) and P. hominis (1.9%) displayed the greater frequencies in the semi-urban/rural areas. Endolimax nana (9.7%), Ascaris lumbricoides (8.3%), and Cryptosporidium spp. (8.3%) were more frequent in rural areas. Other species (Iodamoeba buetschlii, Entamoeba hartmanni, Isospora belli, Giardia intestinalis), tough displaying very low prevalence’s, were recorded in urban settings. Moreover, HIV negative individuals in urban zones were more infected with Blastocystis spp. (P = 0.0156). Cryptosporidium spp. (P = 0.0001) and E. histolytica/dispar (P = 0.0002) were found in high frequency among the HIV positive subjects in the semi-urban/rural zones. Regarding the variations in frequencies of intestinal parasitic infections (Table 3), according to the settings, HIV positive subjects were found significantly more infected in semi-urban/rural and rural settings (P < 0.0003), whereas the frequency of intestinal parasitic infections was significantly higher in HIV negative individuals in urban settings (P = 0.0418). Overall, frequencies of these parasitic infections were higher in rural and semi-urban/rural settings than in urban area (P = 0.0182).

Table 3. Rate of Intestinal Parasitic Infections Among Groups According to Socio-Demographic Parameters

According to the genders the variations in frequencies of intestinal parasitic infections observed among HIV positive and HIV negative subjects were not significant, although males were in general significantly more infected than females (P = 0.0272).

According to age groups, HIV negative subjects aged 29 - 45 were more infected with intestinal parasites than their HIV positive counterparts (P = 0.0056). Moreover, HIV positive subjects aged 45 and over were more infected (P = 0.0055). Overall, frequencies of parasitic infections observed were significantly different between age groups (P < 0.0001), with the infection rate being higher in the age groups of 29 - 45.

Amongst HIV infected subjects, Cryptosporidium spp. was significantly associated with the decrease in CD4 cell count (P = 0.0035), individuals infected with this parasite species exhibiting a CD4 count < 500 cells/mm3 (Table 4). A significant difference was observed in the prevalence of Blastocystis spp. among HIV positive and HIV negative individuals (P = 0.0453). However, Blastocystis spp. was more frequent among individuals exhibiting CD4 count ≥ 500 cells/mm3. In addition, the prevalence of A. lumbricoides was significantly higher among HIV positive individuals in clinical stage A (25.0%) (P = 0.0013).

Table 4. Variation in the Rate of Intestinal Parasitic Infections in HIV Positive Subjects According to Some Variablesa

The infections with Cryptosporidium spp., I. belli, and I. buetschlii were significantly higher in HIV positive patients not taking antiretroviral (P < 0.0226). Although all HIV infected patients had already taken at least one treatment against intestinal pathogens, only 44.1% of the HIV seronegative individuals had taken a treatment against intestinal parasites a month prior to the outset of the study. For individuals who had taken antiparasitic treatment for intestinal infections within one month prior to the sampling, the frequency of Blastocystis spp. was significantly higher in HIV negatives (13.1%) than in HIV positives (6.7%) (P = 0.0333). P. hominis (2.3%) and E. coli (3.8%) were observed only among HIV seronegative individuals (P < 0.0306). In addition, 15 cases (2.8%) of co-infections by intestinal parasites were observed, with 5 cases (1.8%) among HIV positive and 10 (4.1%) amongst HIV negative individuals.

The objective of this study was to assess the infection with intestinal parasites among HIV positive individuals attending four care units in the Center Region of Cameroon. The rates of intestinal parasitic infections were relatively high in both HIV positive and negative subjects attending the targeted care units. However, the rates of parasitic infections in HIV positive individuals have decreased over time as was previously observed elsewhere (4, 23, 24). This can be explained by the improvement in patients’ care though (i) systematic antibiotics, (ii) antiretroviral therapy, and (iii) nutritional and hygienic advices (25-27) provided at care units that have been created in all regions of the country.

The parasites frequently found in both groups were Blastocystis spp. and Entamoeba histolytica/dispar. Cryptosporidium spp. and E. histolytica/dispar were found at higher frequency amongst HIV positive patients. A similar trend was observed for Isospora belli, Entamoeba hartmanni, and Giardia intestinalis though at very low frequencies. Furthermore, Pentatrichomonas hominis and Entamoeba coli were only found amongst HIV seronegative subjects, though at low frequencies. The only helminth species was Ascaris lumbricoides. These different species are recurrent and usually identified in studies carried out in a tropical environment; their transmission is linked to the faecal peril (5, 7, 28-30).

In HIV positive patients, Cryptosporidium spp. was significantly associated with decreased CD4 cell count. Indeed, subjects infected with this parasite exhibited a CD4 count < 500 cells/mm3, confirming the opportunistic nature of this pathogen. Similar results have been previously described elsewhere, and it was accepted that Cryptosporidium spp. and I. belli are generally associated with immunosuppression (4, 7, 31, 32). Also, Cryptosporidium spp., I. belli, and I. buetschlii were found in a significantly high frequency in HIV infected patients who were not taking antiretroviral therapy. It was previously demonstrated that the antiretroviral treatment significantly reduces the viral load of HIV infected individuals, leading to the reconstitution of the immune system of the latter, whose defense cells can efficiently fight against these parasitic species (7).

HIV positive subjects were significantly more infected with intestinal parasites than HIV negative subjects in semi-urban, semi-rural, and rural settings, among individuals aged more than 45 years, as well as among the unemployed individuals. This would be explained by the differences in behavior between individuals from these settings, both in terms of awareness and hygiene, but also lack or insufficient resources for diagnostics and treatments, the relatively low financial resources, the impoverishment of these individuals, and decrease of their immunological status (1, 33, 34).