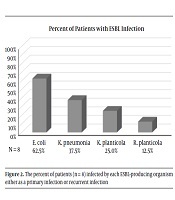 Multidrug-resistant organisms have become an increasing challenge in the management of both solid and non-solid organ transplants. This is especially true with extended spectrum beta-lactamases (ESBL) and carbapenem-resistant Enterobacteriaceae (CRE) infections. We performed a retrospective study of 62 renal transplant recipients at a tertiary care center in El Paso, Texas. In our study population, 43% of patients had a positive urine culture and were treated for a UTI. 30% of those UTIs were caused by an ESBL-producing organism. Of note, 43% of the patients who developed a UTI also had a recurrent episode. Notably, one patient had 25 recurrences of UTIs caused by ESBL producing E. coli. K. pneumoniae and E. coli were the most commonly cultured non-ESBL-producing bacteria (40.7%). E. coli was the most frequently cultured ESBL-producing bacteria (62.5%), while K. pneumoniae was the second most frequently cultured ESBL-producing bacteria (37.5%). There were three transplant rejections; two had ESBL UTIs and one had 11 recurrent UTIs prior to rejection. Diabetes, the length of ureteral stents, and higher troughs of immunosuppressant therapy were observed to be correlated with higher rates of UTIs in our patient population. Our findings are consistent with reports published in current literature regarding rates of UTIs among renal transplant recipients. Due to increasing prevalence of multi-drug resistant organisms and increasing prevalence of carbapenem-resistant Enterobacteriaceae (CRE), it becomes imperative for clinicians to include CRE in the differential diagnosis when evaluating renal transplant recipients with recurrent UTIs. More importantly, CRE must be considered when evaluating renal transplant recipients with recurrent UTIs caused by ESBL producing organisms.

We performed a retrospective study of 62 renal transplant recipients at a 327-bed tertiary care medical center in El Paso, TX, between January 2016 and September 2017. The inclusion criteria for this study were patients who received a renal transplant within the mentioned period. The exclusion criteria for this study included patients who did not undergo transplantation at the study center.

All patients reviewed and included in this study received a renal transplant from either a cadaveric or living donor. Urinalysis and cultures were performed on patients who were both symptomatic and asymptomatic. Urine was collected via clean catch and sampled from indwelling catheters. Cultures were performed using a MicroScan and sensitivities were performed via Kirby-Bauer testing and Epsilometer testing. Various pathogens were isolated via routine urinalysis from renal transplant recipients. The patients with cultures positive for ESBL-producing organisms were included as a subgroup for analysis to determine further risk factors associated with ESBL UTIs post-transplant. All patients are part of a renal transplant registry that stores data that will be used for future analysis to monitor patient outcomes.

The following information was retrieved via retrospective analysis from the medical records of the patient’s that received renal transplants: type of donor (living or deceased), immunosuppressive therapy, drug prophylaxis, surgical procedures, number of UTIs, graft rejection, type of dialysis prior to transplant, time on dialysis, presence of nephrolithiasis, and presence of diabetes (Table 1). Urine samples were collected from patients by either clean catch or through their indwelling Foley catheter and then cultured in the facility’s microbiology department. Renal transplant recipients routinely get a urinalysis (UA) and urine culture every 3 months after transplantation. Patients were treated for an infection if they had signs and symptoms such as fever, dysuria, urgency, and frequency. If they were asymptomatic, patients were treated if their UA had more than 5 - 10 white blood cells or if their culture is positive.

Between January 2016 and September 2017, 62 patients received a renal transplant. 68% of patients were male (42/62); 32% of patients were female (20/62). The mean age of the sample population was 56 years old (range: 25 - 73 years old). The majority of donations came from deceased donors (90.3%); the status of cadaveric donors versus direct organ donation is unknown. Only six patients (9.6%) received transplants from living donors. Only 7 patients had a history of nephrolithiasis (11.3%). 59% of patients were receiving hemodialysis before transplant. 37% were receiving peritoneal dialysis. The dialysis status of 1 patient is unknown. All 62 patients received prophylaxis with Valcyte, Fluconazole, and Bactrim and they were on the same immunosuppressive regimen of Tacrolimus, Mycophenolic Acid, and Prednisone. Data on whether immunosuppression regimen was changed before or after the infection is not available. All patients had ureteral stents placed after the transplant that remained in place from 32 to 96 days. All patients received Levofloxacin 500 mg twice a day for 10 days once ureteral stents were removed. In addition to stent removals, 4 patients had renal biopsies, and 1 patient had transplant nephrectomy after stent removal.

Since the first clinical ESBL isolate was identified in Germany in 1983, more than 100 different natural ESBL variants have since been recognized internationally (10). There has been a 14% increase in ESBL-producing bacteria between 2007 - 2010 (11). ESBLs are described as a group of enzymes with transmissible β-lactamases encoded by genes that can be exchanged between bacteria via plasmids. These plasmids carry genes that allow the bacteria to break down antibiotics belonging to the cephalosporin and penicillin groups, thus rendering the antibiotic ineffective. Currently, the most common genetic variant of ESBL is CTX-M, which acquires beta-lactamase genes through a plasmid rather than genetic mutations (12, 13). In the United States, the most common ESBL-producing organism is Klebsiella pneumoniae (16%), followed by Escherichia coli (11.9%), Klebsiella oxytoca (10%), and Proteus mirabilis (4.8%) (14). Previously, ESBL-producing organisms were only identified in nosocomial infections. Reports in the early 2000s identified actual community-acquired infection or colonization with ESBL-producing E. coli as the etiology for UTI’s (15). The lower digestive tract of colonized patients is recognized as the primary source of ESBL-producing organisms. Wilkowski et al. performed a study that showed a robust association between Klebsiella pneumoniae gut colonization and ESBL Klebsiella pneumoniae positive UTI in recipients of renal transplants (16). Factors that facilitate the spread of ESBL include its relative ease of emergence, diversity of parental beta-lactamases, and the mobility of ESBL genes (10). However, the most significant factor driving ESBL evolution has most commonly been attributed to the intense use of third-generation cephalosporins in hospitals (10, 11, 15, 17).

There has been a debate about potential risk factors for developing ESBL infections. According to the current data, the risk of developing ESBL-UTI among renal transplant recipients is multifactorial. The most important risk factors include advanced age, length of hospital stay, admission to the intensive care unit, the requirement for ureteral stents or catheters, hemodialysis, and the excessive use of third-generation cephalosporins and aztreonam (7, 10, 15, 17). It is also noted that the total number of antibiotics used, and the longer duration of antibiotic use increased the risk of getting ESBL (17). In a study published by Linares et al., the mean age for ESBL infection post renal transplant was 54 years old and over half the patients were male (55%) (7). Additionally, 35% had diabetes, and 57% had previous use of antibiotics. These reported findings are consistent with our results.

Findings from our study are consistent with the most common bacterial isolates found in renal transplant patients. E. coli and K. pnemoniae were responsible for 40.7% of UTIs in our transplant recipients. Prior studies demonstrated that with each additional UTI there is an increased risk for recurrence. Anesi et al. reported infections with extended-spectrum cephalosporin-resistant Enterobacteriaceae are associated with developing recurrent UTI within 12 months, compounding the risk of UTI recurrence (18). They also reported that 75% of ESBL UTIs had a prior history of a UTI with antibiotic treatment. 16 In our study, we found that 7 out of 17 patients had recurrent UTIs with ESBL-producing organisms. Among those patients, three patients had repeated cultures that were consistently positive only for ESBL-producing organisms.

In the studies reviewed, the average rate of ESBL UTI in transplant recipients was 6.9%. There were no reports of graft rejection after UTI. One study provided Bactrim prophylaxis to their patients, similar to our study group (19). These studies demonstrate that the length of stent placement correlates with a higher prevalence of ESBL UTIs and a high rate of UTI recurrence even after stent removal. Immunosuppression with tacrolimus and prednisone were shown to correlate with higher rates of ESBL infections, and higher troughs of tacrolimus and mycophenolate were associated with higher rates of ESBL UTI (11, 19, 20). This reported data is consistent with observations from our collected data.

The data collected from our study was similar to the data published by Linares et al. (7). The rate of ESBL infections in our renal transplant patients increased with age, with the average age being 56 years old with a male predominance (69.9%). Additionally, 58% of patients from our tertiary care center had diabetes. The presence of diabetes plays an interesting role in the development of UTI in transplant recipients. Diabetes decreases cytokine secretion in the urinary tract, which leads to a reduction in local immunity and serves as a nidus for the growth of multi-drug resistant bacteria, such as ESBL-producing organisms (11). Consistent with the published data, more patients receiving hemodialysis (59%) had ESBL compared to those receiving peritoneal dialysis. The risk of developing ESBL in kidneys from living donors relative to deceased donors could not be determined due to lack of available data on living donors.

Ureteral stricture is one of the most common complications post-renal transplant. Transplant recipients routinely have percutaneous stents placed to relieve the stricture. The length of stent placement varies among patients. These stents may serves as a focal point for biofilm production. Biofilm provide the perfect environment for bacterial growth and higher survival rates due to poor antibiotic penetration. Additionally, the proximity of various microbial genes allows for the exchange of antibiotic resistance plasmids. This dynamic environment may explain why ESBL infections increase with an increasing number of days patients are required to have a ureteral stent in place.

Transplant recipients may be more susceptible to infections with multi-drug resistant pathogens because they are more likely to come into contact with these pathogens through their frequent visits to healthcare facilities. The cross-transmission of ESBL-producing organisms between patients within the same hospital may be related to poor hand hygiene among medical personnel or contamination of various diagnostics supplies, such as thermometers or gel used in ultrasonography (10).

Our study demonstrated several patients had recurrent UTIs with ESBL-producing organisms. Of the seven patients noted, each patient had on average more than three recurrent infections, with one patient having 23 recurrent UTIs with ESBL E. coli. This may be attributed to the failure of carbapenems in certain ESBL strains known as Carbapenem-resistant Enterobacteriaceae (CRE). CRE is not detected in routine lab cultures, and the lack of awareness of such pathogens may lead to an increase in infections among individual patients. ESBL-producing organisms can acquire carbapenem resistance by a variety of proposed mechanisms. It can gain resistance to carbapenems by the combination of porin loss and the presence of the plasmid mediated-lactamases, as demonstrated in clinical isolates of Klebsiella pneumoniae exhibiting carbapenem resistance. Additionally, the presence of plasmid-mediated beta-lactamase is capable of hydrolyzing carbapenems. Lastly, these organisms can change in the affinity of penicillin-binding proteins for carbapenems, rendering carbapenems ineffective (15). In a particular case, eight patients with carbapenem resistance mediated by the combination of porin loss and the enzyme deactivation were identified in a single intensive care unit. All eight patients had been treated with imipenem previously. Since no other antibiotic options were available, six of the eight patients died from the infection. In such cases, the use of tigecycline or polymyxins has been proposed for consideration in the treatment of carbapenem-resistant Klebsiella (15).

We would like to thank Bleu Knight for her statistical advisement.

Copyright © 2019, International Journal of Infection. This is an open-access article distributed under the terms of the Creative Commons Attribution-NonCommercial 4.0 International License (http://creativecommons.org/licenses/by-nc/4.0/) which permits copy and redistribute the material just in noncommercial usages, provided the original work is properly cited.
download pdf 183.82 KB Get Permission (article level) Import into EndNote Import into BibTex
Number of Comments: 0