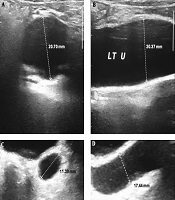 Upper urinary tract dilation, the most common urological manifestation of the Wolfram syndrome (WS), is mainly non-obstructive and secondary to other components of the disease such as diabetes insipidus. Misdiagnosis of the type of the hydroureter in Wolfram patients and encountering them as obstructive uropathies has led to ineffectual surgeries such as ureter re-implantation. Based on previous studies drainage related ultrasonography (DRUS) is a beneficial means of distinction between obstructive and non-obstructive hydroureters.

Seven patients (14 ureters) with a mean ± SD age of 24.43 ± 4.25 months who were diagnosed with WS were included in this retrospective study. The definite diagnosis of the non-obstructive type of hydroureter was assessed by appropriate imaging modalities. The maximum diameter of these 14 ureters, before (D1) and after (D2) 3 hours of catheterization were observed by ultrasonography. Values were recorded as D ratio ( [(|D1 - D2|)/D1] × 100) and the cutoff point of 22% for D ratio was set to discriminate the subtypes of the hydroureter.

Measurement of maximum diameter of ureter prior to catheterization indicated a mean ± SD diameter of 20.64 ± 2.73 mm; decreasing to 11.07 ± 2.64 mm after 3 hours of catheterization which indicates a significant decrease. Mean D ratio of 14 hydroureters was 45.95 ± 13.01% which indicated significantly higher percentage than 22%, revealing that hydroureters’ type in WS is non-obstructive.

DRUS is a useful method for the assessment of the hydroureter’s type in WS and it could prevent performing unnecessary surgeries in WS patients.

Wolfram syndrome (WS) is a rare hereditary neurodegenerative disease that was first described by Wolfram and Wagener in 1938 (1). This syndrome is characterized by coincidence of early-onset diabetes mellitus and optic atrophy, followed by a wide spectrum of manifestations affecting different organs, including sensorineural deafness, urological abnormalities, psychological abnormalities, and endocrine disorders (2).

WS prevalence is estimated to be around 1 in 68,000 - 770,000, differing based on racial differences (3, 4). This syndrome bears a poor prognosis and yet there is no effective treatment to prevent its progression. The mortality rate in patients under 35 years old is 65% and patients affected by WS have a median life expectancy of 30 years (5).

The first causative genetic mutation was found in WFS1 locus which encodes Wolframin, an endoplasmic reticulum (ER) transmembrane protein involved in membrane trafficking and regulation of ER calcium homeostasis. Wolfram syndrome type 2 is due to mutations in the CISD2 gene that encodes another ER intramembranous protein. Both types of WS are usually inherited in an autosomal recessive pattern (6, 7).

Although urinary tract dysfunctions include upper tract dilatation and bladder dysfunctions are amongst common reported manifestations of WS, their etiology is still unclear but the main hypotheses behind these dysfunctions are distention injuries secondary to polyuria and autonomic dysfunctions (8).

Up0per urinary tract dilatation is an important entity since it increases the risk of urinary tract infections and progression of acute and chronic renal failure. However, controversies exist regarding its etiology as well as its treatment (2, 9).

Current established modalities for discriminating obstructive and functional hydroureters are sparse and restricted due to their invasiveness and low specificity. Based on previous studies drainage-related ultrasonography (DRUS) can be an efficient radiological modality in distinction of the hydroureters’ types. In this study, we prospectively studied application of DRUS in WS in detection of hydroureters’ types in order to prevent invasive surgical interventions.

Patients with hydrouretronephrosis on ultrasonography who were previously diagnosed with WS and were hospitalized in Children’s Medical Center, Tehran, from 2010 to 2016 were included in the study. Patients who had accompanying urogenital anomalies, and had undergone surgical repair or had transient hydroureter, were excluded. Moreover, incomplete medical records and incompliance with the study were regarded as exclusion criteria.

Wolfram syndrome diagnosis in all patients was based on following criteria: Insulin-dependent diabetes accompanied by optic nerve atrophy that was not associated with other diseases or abnormalities. The diagnosis was established finally by genetic examination for WFS1 gene mutations.

Patients were closely inspected and underwent routine follow-ups after diagnosis by monthly urinalysis, urine culture and renal function tests. If recurrent UTI was observed in a patient, further investigation was done by urinary tract ultrasound and VCUG, every 3 months and every 6 months, respectively up to one year.

In order to distinguish the etiology of hydrouretronephrosis among patients, Drainage related ultrasonography (DRUS), a recently-introduced technique in ultrasonography, was performed in patients with urinary tract dilations detected in ultrasound, MRU or VCUG. DRUS in all patients was performed by a single pediatric radiologist to avoid operator-dependent variations.

All parents were provided with a detailed description prior to DRUS, and oral informed consent was obtained from all parents or guardians. All participants received care according to the 2008 World Medical Association Declaration of Helsinki.

DRUS technique consists of several steps. Initially a baseline US of upper urinary tract is indispensable to provide us with baseline measurements of renal parenchymal diameter, renal pelvis diameter and ureteral diameters on longitudinal views. To assure the reliability of these measurements and its independence from bladder fullness, toilet-trained children were requested to void prior to continuing evaluation. In case measurements were altered after voiding, the patient was excluded from the study.

Afterwards a three-hours bladder drainage was performed with the aid of ureteral catheterization by proper Nelaton catheter (Figure 1). Patients were not restricted regarding walking, food and drinks during the 3-hours catheterization; they were closely watched by a pediatric radiologist and a pediatric urologist during the process.

A total of seven patients, with a mean age of 24.43 ± 4.25 months, previously diagnosed with WS and with hydrouretronephrosis as the indication for DRUS, were identified. This group of patients consisted of 4 females and 3 males. Characteristics of the patients and their imaging details are shown in Table 1.

Following the measurements of renal parenchymal diameters and ureteral diameters on longitudinal views before and after a 3-hour drainage, the mentioned equation was used to calculate P ratio and D ratio for each patient. The mean P ratio among patients was 0.50 ± 0.06. The mean D ratio in this group of patients was 0.45 ± 0.13 with a 0.03 standard error of mean. The D ratio was compared to the cutoff point of 0.22 that was earlier introduced in a study done by our center. One-sample t-test was used to examine if any significant difference between the cutoff point and the D ratio in our patients existed, which demonstrated that D ratio was significantly higher in our patients (P value < 0.05). It can be inferred from these calculations that hydrouretronephrosis in patients suffering from WS is probably a non-obstructive type. 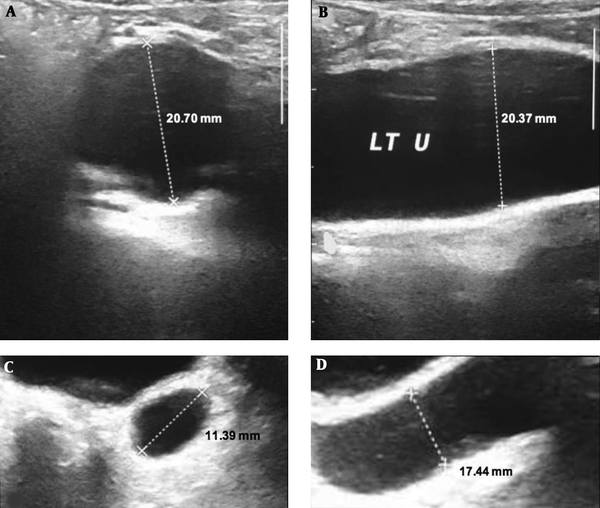 Urological dysfunctions are among common manifestations in WS; and their complication is a common cause of mortality and morbidity in affected patients. Majority of urinary complications are in the form of upper urinary tract dilatation, reported to be present in 90% of patients; however, they remain asymptomatic in many patients. Upper urinary tract dilatation varies from mild hydronephrosis to megaureter (8, 11).

Several theories have been proposed to explain these urologic manifestations. The main hypothesis is that dilated upper tract and large atonic bladder are secondary to other components of the syndrome including polyuria due to diabetes insipidus and diabetes mellitus or autonomic nerve dysfunction. However, there is also a notion that urologic symptoms might be primary components of WS (8).

Misdiagnosis of the type of the hydroureter in WS patients and encountering them as obstructive hydroureters has led to ineffective, unnecessary and invasive procedures for instance ureter re-implantation.

Current established imaging modalities to detect obstruction in urinary tract and to differentiate different types of hydroureters are intravenous ureterography (IVU) and diuretic renography. IVU is the mainstay imaging modality to detect obstructive uropathies and it can assess the function and the structure of the kidney in the same time; however, it produces a high rate of false-positive results or indeterminate findings and it also exposes the child to ionizing radiation with long-term consequences (13).

Diuretic renography can potentially differentiate distinct degrees of obstruction and it is beneficial for evaluation of differential function at diagnosis as well as during follow-up of primary megaureter. On the other hand, as it requires longer time and patients’ steadiness during the imaging its use is limited (14, 15).

The use of Fluorescence imaging as an alternative to radiological modality to detect ureteropelvic junction obstruction (UPJO) has been proposed but it is only limited to animal studies and has not been applied to differentiate obstructive from non-obstructive hydroureter (16).

Magnetic resonance urography (MRU) is a highly sensitive means to detect the obstruction, it provides detailed information on morphological features and does not expose the child to radiation but MRU is expensive, requires sedation and lasts up to one and half hours (17).

Computed tomography urography (CTU) is promising to evaluate ureteral obstruction but besides the contrast media reaction, the use of CT scan is very limited in pediatric population because of the high amount of radiation exposure (18).

Other studies explored the use of color Doppler sonography as a modality of discrimination between two types of hydroureter and assessed the relative jet frequency less than 25% as a good indicator of obstruction in severe unilateral hydronephrosis but its ability in determining obstruction at some levels is yet to be defined (19).

In 2015 Kajbafzadeh et al. (10) proposed DRUS as a beneficial means of discriminating obstructive and non-obstructive hydroureters and they also claimed that DRUS can differentiate the level of the obstruction. They developed a formula as D ratio= [(|D1-D2|)/D1] × 100 in which D1 referred to the largest diameter of the ureter, immediately after the insertion of bladder catheter, and D2 presented the same value after 3 h of catheterization. It has been showed that by cutoff value of 22% of D ratio with a sensitivity of 78.5% and specificity of 83.4% we can predict the presence of the obstruction. The free drainage provided by DRUS by increasing the urine flow, decreases the bladder pressure in non-obstructive uropathies and hereby differentiates the underlying etiology of the hydroureter (10). DRUS has the advantage of being cost-effective and no radiation exposure but it also has been known that like any other sonography related modality, DRUS is associated with some degree of operator dependence. Repeated catheterization as the only invasiveness of DRUS has been minimized by performing the VCUG at the end of DRUS and omitting the free bladder drainage phase of diuretic renogram.

To sum up, it is essential to consider DRUS as a diagnostic tool for establishing hydroureters’ type in WS, and limiting unnecessary surgeries, that are beneficial only for obstructive hydroureterss.

Treatment approach to hydroureteronephrosis is dependant on whether it is obstructive or non-obstructive, therefore distinguishing this characteristic is critical. The present study, demonstrated efficacy of DRUS in differentiating obstructive and non-obstructive hydroureters with high sensitivity in patients with WS. It also emphasized on this modality’s accessibility and low-cost. Furthermore, DRUS would limit patients’ exposure to unnecessary radiation and therefore could be accounted as a conventional imaging method in WS patients.