Family and School Predictors of Tobacco Use in Chilean Adolescents Aged 13 - 14: A National Study 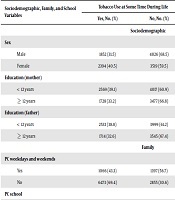 Adolescent smoking is a major health care concern which calls for a more in-depth study of the factors affecting this pediatric disease. We aimed to determine the prevalence of tobacco use among Chilean adolescents aged 13 - 14 and its association with family and school factors.

This was a cross-sectional analytical study. Data from the Eleventh Chilean National Study of Drugs in the School Population 2015 were used (n = 11,791). School and family variables of parental control were evaluated and analyzed by the chi-Square test and a multivariate logistic regression model. Data were processed with the STATA V. 14.0 software at the α = 0.05 level of significance.

There is a feminization of cigarette use, and the risk of cigarette smoking increases considerably among adolescents who run away from school. However, parental control and school performance are powerful protective factors against early tobacco use.

Smoking is one of the main public health problems worldwide because of its magnitude, social and health consequences, and high public expenditure (1, 2). Smoking is highly related to the occurrence of chronic diseases such as cancer and cardiometabolic, cerebrovascular, and respiratory diseases, which have a major impact on the increase of all types of morbidity and mortality worldwide (3-5). Tobacco use in middle-aged individuals is expected to be the most important risk factor for premature death of men and women by 2025 (6).

Since the initiation of tobacco use usually occurs during adolescence, it has been considered a pediatric disease, which is caused by the interaction of many factors such as psychological, social, educational, and family (7-9).

Diverse studies have emphasized the important role of both family and school to prevent and control tobacco use (10-12). However, studies evaluating the aspects related to the family environment and its influence on the onset of smoking in children and adolescents are still limited in Latin America.

The objective of the present study was to determine the prevalence of tobacco use in Chilean adolescents aged 13 - 14 and its association with family and school factors. We hypothesize that parental control and better school performance are protective factors against tobacco use, whereas running away from school would be a risk factor.

This was a cross-sectional analytical study. Data from the Eleventh Chilean National Study of Drugs in the School Population 2015 (13) were used; these data belong to the National Service for Prevention and Rehabilitation of Drug and Alcohol Use of the Chilean Ministry of Home Affairs and Public Security. The probabilistic sample consisted of 11,791 adolescents across the 15 political regions in Chile, who met the following inclusion criteria: had used tobacco at some time in their lives and complete information regarding age and sex; adolescents over 15 years were excluded.

The sociodemographic variables were sex, age, and parental education (< 12 years; ≥ 12 years). Family variables included three questions referring to parental control (PC): (1) PC weekdays and weekends (Do parents know their children’s whereabouts during the week and on weekends?), (2) PC school (Are parents aware of their children’s school activities?), and (3) PC friends (Do parents know their children’s circle of friends?). The variables related to school included two questions about school performance (grade point average ≤ 5.4 or ≥ 5.5 on a scale of 1 - 7) and running away from school (Has your child left school without authorization?).

The study was reviewed and approved by the Bioethics and Biosecurity Committee of the Universidad del Bío-Bío.

The statistical analysis included bivariate analysis by chi-Square and a multivariate logistic regression model adjusted for sex and age in which the association between tobacco use at some time during life with family and school variables by odds ratio (OR) and confidence interval (CI = 95%). Model adjustment was evaluated by the Hosmer and Lemeshow test. Data processing was performed with the STATA V. 14.0 software at α = 0.05 level of significance.

There are significant statistical differences in the prevalence of tobacco use according to sex, which was higher for girls than boys (40.5% and 31.5%, respectively) (P < 0.001). Adolescents whose parents had < 12 years of education had higher tobacco use. The PC weekdays and weekends, PC school, and PC friends was significantly related with prevalence, and these were lower in all the cases in which there was PC. The prevalence of tobacco use in adolescents who had run away from school was higher (59.8%) than those who had not (32.4%). Subjects with a grade point average ≤ 5.4 exhibited higher prevalence (41.7%) than those with higher averages (24.7%) (Table 1).

Table 1. Prevalence of Tobacco Use in Chilean Adolescents According to Sociodemographic, Family, and School Variables

Table 2. Logistic Regression Model for the Association Between Tobacco Use and Family and School Variablesa

aModel adjusted for sex and age.

The use of harmful substances such as alcohol, drugs, and tobacco increases morbidity and mortality in the medium and long term in children and adolescents (14). Despite the efforts that countries have made to remediate the situation, these appear to be insufficient since trends continue to rise (15).

In our study, the group of girls showed a higher prevalence of smoking habits (40.5%) compared with the boys (31.5%); these results are similar to those reported by the Global Youth Tobacco Survey (GYTS) which shows evidence of the feminization of tobacco use (16). The tobacco industry has been described as using marketing strategies based on female behavior to create products that encourage female tobacco use (17). Important gender differences have been described in smoking behavior; however, further research is needed to explore these relationships (18).

Among the many factors associated with adolescent smoking, those related to family (PC) and school (school performance) are particularly relevant. The present study found that effective PC on weekdays, school activities, and knowledge of their children’s circle of friends, in addition to having better school performance are protective factors against tobacco use.

Nosa et al. studied adolescents in New Zealand and found a higher prevalence of tobacco use in adolescents whose parents were more permissive or without any PC compared with those with PC (11.2% vs. 6.4%, respectively); however, no association these two was encountered (OR 1.490, 95%CI: 0.970 - 2.270) (19). Less PC can be due to many factors, but it appears to be more related to an underestimation of the effects of smoking compared with other drugs and to the family’s perception regarding the responsibility of tobacco companies in the population’s smoking habits (20, 21). In a study of Swedish adolescents, the increase in the proportion of those who had never smoked was largely due to parental intervention (22).

The limitations of this study mainly pertain to using a database which does not consider some variables that could be relevant to explain the phenomenon.

We found that the feminization of smoking persists, and this is similar to the world trend. The risk of cigarette smoking increases considerably in those adolescents who run away from school. However, parental control and school performance are powerful protective factors of early tobacco use. These aspects must be considered for an early intervention of the smoking habit in this age group.

The authors thank the National Service for Prevention and Rehabilitation of Drug and Alcohol Use (SENDA) of the Chilean Ministry of Home Affairs and Public Security for their permission to use the database. All results from the study or research are the responsibility of the authors and in no way involve that institution.