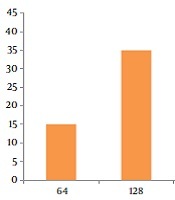 Cystic fibrosis (CF) is an autosomal recessive disease characterized by respiratory, gastrointestinal, and reproductive tract problems. Patients with CF often suffer from chronic pulmonary infections due to the Pseudomonas aeruginosa, which frequently ends in pulmonary exacerbations. With their anti-inflammatory, anti-virulence, and anti-biofilm properties, macrolides such as azithromycin (AZM) play a beneficial role in the treatment of CF.

We evaluated the ability of biofilm formation among P. aeruginosa isolates from CF patients and compared the anti-bacterial and anti-biofilm effect of the AZM on them.

P. aeruginosa isolated from CF patients showed a high level of MIC and MBC for AZM that indicated a weak anti-bacterial effect of AZM. However, AZM inhibited biofilm formation in low doses; this might lead to dangerous chronic pulmonary infection by P. aeruginosa.

Cystic fibrosis (CF) is a common multisystem autosomal recessive disease, with an unknown prevalence in Iran. However, about 1200 patients have been registered in the Iranian CF Center Registry System so far (1). Mutation of the cystic fibrosis transmembrane conductive regulator (CFTR) gene that affects chloride ion channel function creates thicker and stickier mucus in the lungs, pancreas, and other organs, resulting in cystic fibrosis. Although CF occurs in numerous organs, it is mostly presented in the upper and lower airways, pancreas, bowel, and reproductive tracts (1).

For many patients, pulmonary problems are the worst in terms of symptoms, and the required treatments (1). Meanwhile, Pseudomonas aeruginosa, an opportunistic pathogen, is the most important cause of pulmonary infection in CF patients, which mainly leads to lung destruction and the patient’s death (2). By late adolescence, 80% of CF patients have been already chronically infected (2).

Unique lung environment condition in CF patients with dehydrated mucus, high osmotic pressure, and high salt concentration, leads to alginate over-production and results in emerging mucoid phenotypes of P. aeruginosa, and ultimately its biofilm formation (2). Biofilm is defined as communities of microbes associated with surfaces or interfaces; bacteria growing in biofilm are much more resistant to antibiotics and can cause lethal chronic infections (2). Evidence suggests that biofilm formation is associated with therapeutic failure, especially in chronic infection (3, 4). Furthermore, P. aeruginosa shows resistance to a variety of antibiotics via its innate and acquired resistance mechanisms, so finding an effective antibiotic for its eradication becomes very difficult (5).

In recent years, the efficacy of macrolides in P. aeruginosa pulmonary infection in bronchiectasis, Chronic Obstructive Pulmonary Disease (COPD), and CF patients have been reported (6). Several studies have demonstrated that macrolides through many mechanisms decrease exacerbations, improve lung function, and exert their beneficial anti-inflammatory activity and anti-virulence effects (6, 7). It has been reported that long-term daily administration of azithromycin (AZM) significantly decreases symptoms and inflammatory parameters and increases the survival of CF patients suffering from chronic P. aeruginosa lung infection (8). A similar effect has been reported in CF and COPD patients with chronic P. aeruginosa infection in a controlled study using AZM 250 mg/day for 3 months and then 500 mg orally three times per week, over 12 months (9). Also, the impact of AZM on biofilm and mechanism of its effect has been considered, and it has been shown that AZM prevents and abolishes the biofilm matrix through inhibiting the quorum sensing, which is necessary for maturation of the biofilm (5, 7).

Although the role of AZM as a quorum sensing inhibitor has been already shown, several studies have reported that P. aeruginosa may be resistant to AZM by MexCD-OprJ efflux pump during biofilm formation (5).

Furthermore, heterogeneous responses to the environment within an isogenic bacterial population could lead to the appearance of phenotypic variants called persister cells. P. aeruginosa strains isolated from CF patients typically show high levels of persister cells. Interestingly, the persister cells are not genetically resistant to antibiotics but are tolerant to high concentrations of antibiotics and make the treatment of infection in CF lung even more complicated (5, 10).

In the present study, we evaluated the ability of biofilm formation in P. aeruginosa isolated from CF patients that might associate with chronic lung infection and antibiotic treatment failure. In CF patients, chronic lung infection of P. aeruginosa mainly leads to lung destruction and death. Also, we evaluated and compared anti-bacterial and anti-biofilm effects of AZM on these isolates to demonstrate the efficiency mechanism. To our knowledge, up to now, there is no study on anti-biofilm effects of AZM against P. aeruginosa isolated from Iranian CF patients.

Of 55 CF patients registered to CF Center in Tehran Children’s Medical Center between June and December 2018 who had a history of P. aeruginosa lung infection, 21 P. aeruginosa isolates were clinically collected. All isolates were maintained at -70°C in Tryptic soy broth (TSB) (Merck, Germany) containing 10% dimethyl sulfoxide (v/v) (Sigma, USA) before using. All ethical aspects of this project have been complied with the principles laid down in the Declaration of Helsinki.

P. aeruginosa ATCC 27853 and P. aeruginosa PAO1 were used as the quality control for antibiotic susceptibility and biofilm assay, respectively.

Anti-bacterial susceptibility profiles of the P. aeruginosa isolates were determined by the disk diffusion method according to the recommendations of the Clinical and Laboratory Standards Institute (CLSI, 2018 ed) (11). The antibiotic disks (MAST Diagnostics, Merseyside, UK) were azithromycin (15 μg), ceftazidime (30 μg), ciprofloxacin (5 μg), aztreonam (30 μg), meropenem (10 μg), and tobramycin (10 μg). All tests were repeated at least 3 times, and the averages of the inhibition zones were reported.

The minimum inhibitory concentration (MIC) of AZM (donated by Tehran Chemie, Iran) was estimated by the broth microdilution method (11). Briefly, a final bacterial inoculum of 5 × 106 log-phase CFU/mL was used as the inoculum. AZM solution (10 mg/mL) was prepared by ethanol 95% dilutions of 4 - 2048 µg/mL in microtiter plates (SPL Plastic Labware, Korea). The concentration of antibiotic resulting in no visible growth was taken as the MIC. All tests were repeated at least 3 times, and the averages of MIC values were reported. The last two columns of each microtiter plate were used as controls (medium control and bacterial growth control).

The minimum bactericidal concentration (MBC) of AZM was determined according to CLSI guidelines (11). Briefly, from microtiter plate wells with a concentration equal and higher than MIC, inoculated on Tryptic soy Agar (TSA). All tests were repeated at least 3 times, and the averages of MBC were reported.

For biofilm assay, a flat-bottomed 96-well cell culture microtiter plate (SPL Plastic Labware, Korea) was used. As described previously, 100 μL of TSB medium supplemented with 0.2% glucose was added to each well and then 100 μL of 108 CFU/mL (24 hour P. aeruginosa culture) were inoculated in each well and then were incubated at 37°C for 20 hours.

After incubation, the planktonic cells were removed, and plates were rinsed thrice using pre-warmed (37°C) physiological saline. The plates were dried for 15 min in a sterile setting. Then, as supplementary 200 μL of TSB with 0.2% glucose and 50 μL of 2,3,5-triphenyl-tetrazolium chloride (TTC) solutions (0.5%) (Merck, Germany) were added to each well, plates were incubated in the dark for 6 hours at 37°C and 150 rpm. After this period, the absorbance was measured at 405 nm. The assay was performed in 6 replicates in 2 different days for each experiment (12).

The minimal biofilm inhibitory concentration (MBIC) was determined by microtiter plate and according to CLSI guidelines (11). Briefly, after filling the wells with 100 μL of TSB with 0.2% glucose, a sub-MIC of AZM was used for serial dilutions (1 - 512 µg/mL). The last two columns of each microtiter plate were used as controls (medium control and bacterial growth control). By using a 24-hour culture of biofilm-producing P. aeruginosa isolates, 100 μL of suspension with 0.5 McFarland standard concentration was inoculated in each well, except medium controls, and then were incubated at 37°C for 20 hours.

Similar to the method described above, removing planktonic cells, washing, and drying were carried out, and then 170 μL of TSB with 0.2% glucose and 30 μL of 1%TTC solution were added to each well. Plates were incubated in dark for 5 hours at 37°C and 150 rpm. After this period the absorbance was measured at 490 nm. The assay was performed in 3 replicates in 2 different days for each experiment (12).

Among 21 P. aeruginosa clinical isolates, 42.54% were collected from male patients and 57.4% from female ones. Most of the isolates (90%) were obtained by throat swab, and the remaining by sputum culture. 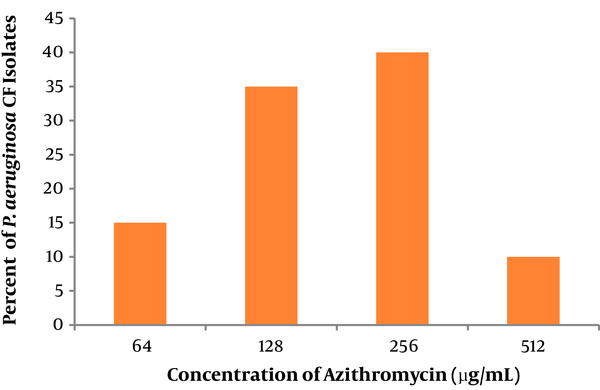 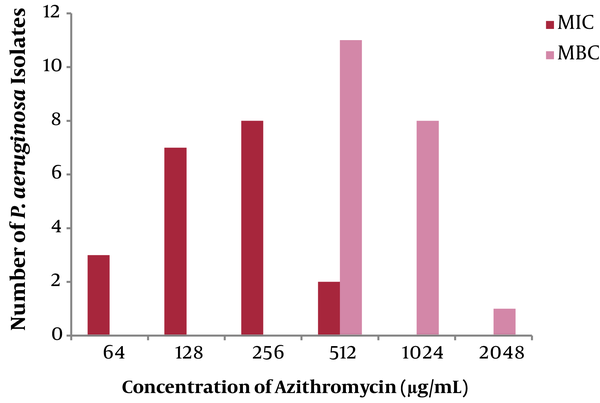 Results showed that for biofilm-producing P. aeruginosa isolates, sub-MIC concentration of AZM (8 ≤ MBIC ≤ 64 µg/mL) inhibited the biofilm formation. It indicates a robust anti-biofilm effect of AZM in a low dose. 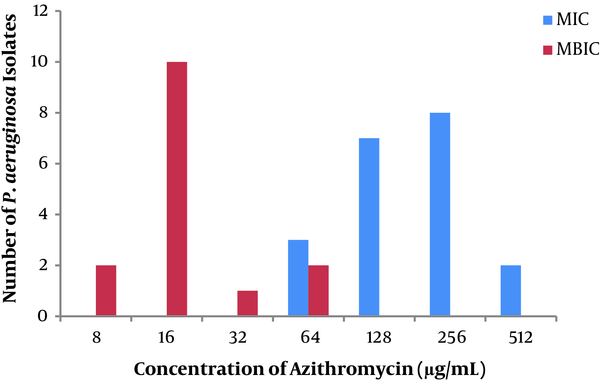 In the meantime, we observed that 75% of P. aeruginosa isolates showed heterogeneous azithromycin resistance phenotype, i.e., subpopulations of bacteria exhibit heterogeneous susceptibilities to a particular antibiotic within an isogenic population. The heterogeneity of bacterial cells might be the reason for the increasing resistance to antibiotics, and mostly, it occurs in response to high doses of antibiotics (5, 10, 21).

Although AZM has not been approved for the treatment of infections caused by P. aeruginosa and no published breakpoints exist for this species, various studies have shown beneficial effect in patients with CF, COPD, and asthma (11, 25-27). In addition, the Cystic fibrosis foundation guideline and the American Pulmonary Clinical Practice Guidelines currently advocate routine use of AZM for all CF patients aged above 6 years irrespective of chronic P. aeruginosa infection (28). The 2018 revision of best practice guidelines of the European CF Society states that maintenance therapy with AZM can improve lung function and reduce pulmonary exacerbations in P. aeruginosa chronically infected patients (29).

The main limitation of this study was expensive materials and equipments and also there were a few participants in sampling. Due to the small number of volunteer patients for sampling, there was no difference between those who were in the acute or chronic infection stage. Also, among the patients participating in the sampling, some had a history of AZM use that could affect the test results. In addition, in P. aeruginosa isolates from CF patients, in the laboratory the antibiotic resistance might be different from that in vivo.

The high rate of biofilm in P. aeruginosa isolated from CF patients might be so disturbing. It seems the biofilm formation associated with antibiotic resistance and treatment failure; these two occurrences might lead to dangerous chronic infection. So, it appears that the prevention of biofilm production could reduce chronic infection. Furthermore P. aeruginosa pulmonary infection treatment might be achieved by using proper anti-biofilm or beneficial therapies on microbial biofilm as well as appropriate antibiotics regimen. AZM showed a high level of MIC and MBC and a weak anti-bacterial effect on P. aeruginosa isolated from CF patients.