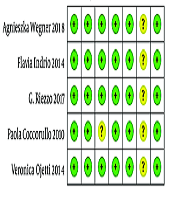 Effectiveness of a Probiotic for Functional Chronic Constipation: A Meta-analysis of Randomized Controlled Trials

The metabolic effects of Lactobacillus reuteri DSM 17938 administration in the treatment of functional chronic constipation are unknown.

The purpose of this review is to investigate the function of L. reuteri DSM 17938 in bowel movements and stool consistency in children and adults diagnosed with functional chronic constipation.

Five electronic databases were used to search for the English version of Randomized Controlled Trials (RCTs) published between 2000 and 2018 that investigated the metabolic functions of 4–8 weeks of a dietary L. reuteri DSM 17938 intervention in children and adults diagnosed with functional chronic constipation. The risk of bias was evaluated in eligible studies, and a random-effects model was used to perform a meta-analysis for qualitative and quantitative analyses.

There were significant differences in bowel movements between the experimental and placebo groups, and no significant differences in stool consistency. In addition, there were no adverse effects of the L. reuteri DSM 17938 treatment reported. These results demonstrate the beneficial effects of L. reuteri DSM 17938 in functional chronic constipation patients in comparison with placebo.

Functional chronic constipation (FC) is a common clinical gastrointestinal disease, and the prevalence of FC in the general population ranges from 15% to 25% (1, 2). FC affects the quality of life of patients of all ages and both sexes. Before 2016, the diagnosis of FC was generally based on the Rome III Criteria for Gastrointestinal Disorders (3). After 2016, the new Rome IV standard introduced a new definition of intestinal-brain interaction disorders for functional gastrointestinal diseases, but there has not been much change in the diagnostic criteria for FC. The new definition emphasizes the development of symptoms associated with dysmotility, visceral hypersensitivity, changing in mucosal and immune functions, changing in gut flora, and abnormal functioning of the central nervous system (CNS).

The cause of FC is mainly related to flora disorders, intestinal motility disorders, pelvic floor dysfunction, psychosocial factors, and gastrointestinal regulatory peptide abnormalities (4). At present, the drugs used in the first-line treatment for FC are mainly various types of laxatives and prokinetic drugs. These drugs have many side effects, and the effects of their long-term use are not ideal (5). However, some FC patients seek alternative therapies due to the lack of beneficial effects and high risk of drug-related adverse events (6). Presently, the use of probiotics in functional gastrointestinal disorders, organic and constipation has gained interest. The change in intestinal flora in chronic constipation provides a theoretical basis for the use of probiotics (7). In fact, flora disorders play a vital role in development of the gastrointestinal disorders such as FC (8, 9).

There are several studies that suggest a benefit of L. reuteri DSM 17938 in FC (13-17); however, to our knowledge, no systematic reviews have investigated the function of L. reuteri DSM 17938 supplementation in patients with established FC, therefore highlighting the need for further exploration of this topic. The purpose of this meta-analysis was to determine the effects of 4-8 weeks of probiotic supplementation, compared to placebo, on the intestinal movement and fecal consistency in FC patients.

The Embase, PubMed, Ovid MEDLINE, Google Scholar, Web of Science, Cochrane Library, and Clinicaltrials.gov databases were searched to identify articles published between January 2000 and December 2018 (Figure 1). The following search terms were used: (probiotic * OR Lactobacill * OR bacteria * OR ferment * OR microorganism * OR DSM 17938), and (Functional Chronic* OR constipation * OR astriction * OR coprostasis* OR gastrointestinal disease*). 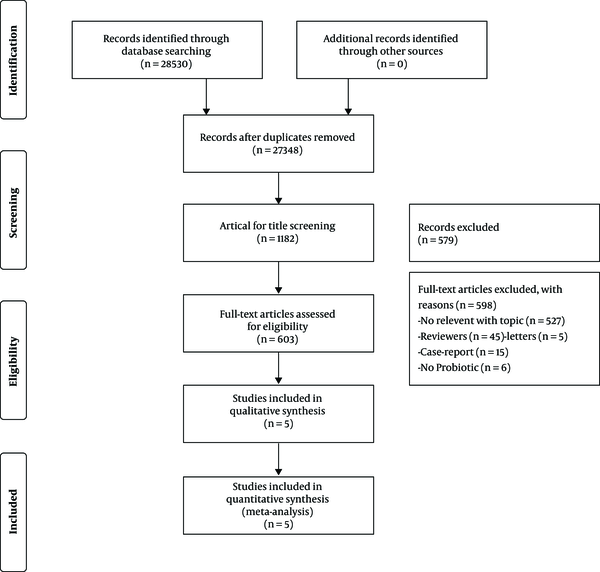 Two reviewers reviewed the titles and abstracts of all articles. Duplicates, articles with a non-RCT study design, review articles, and articles in which there was no diagnosis of FC or no probiotic intervention were excluded. All relevant features included in the test, such as type of FC, strain of probiotics, dose of probiotics, test and duration of follow-up, and characteristics of the patients, were collected and summarized. All eligible RCT studies considered symptom improvement in FC patients as an outcome of interest. The reference lists of articles identified from the search were reviewed to identify any other eligible articles. Characteristics of the included articles (13-17) are shown in Table 1.

Table 1. Characteristics of the Randomized Controlled Trials (RCT) Included in the Review

All the studies included in the review had a low risk of bias. The Jadad score, which indicates the quality of all studies based on the description of selection, performance, detection, attrition, and reporting and other bias, was used to evaluate the methodological quality of the trials (Figure 2). 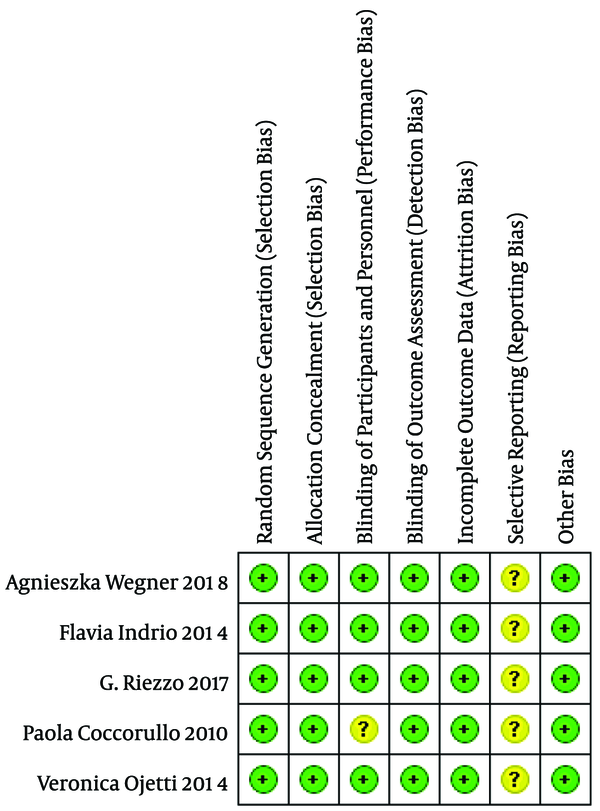 3.4. Assessment of Risk of Bias in Included Studies

The risk of bias was assessed by two independent review authors (XW and RY), and disagreements were resolved through consultation with a third review author (XL). We used the Cochrane Collaboration tool to assess the risk of bias in each of the included studies. Based on our judgments on each area or potential bias risks, we assigned the study as having one of three categories: “low risk of bias”, “unclear risk of bias” or “high risk of bias”. Whether the study should be included in the meta-analysis was determined from a separate assessment based on the outcome of the bias assessment risk, and studies considered to have high risk of bias were excluded. The articles that were eventually included in the meta-analysis were judged by XW and XL and supervised by RY based on the results of the risk of bias assessment.

Bowel movements with probiotic treatment compared to with placebo interventions

Stool consistency with probiotic treatment compared to that with placebo intervention

Probiotics used to treat constipation started when researchers found that the intestinal microecology of constipation was different from the normal intestinal microecology (25). No adverse reactions of probiotics were found in these studies. Probiotics are low-pathogenic or nonpathogenic microorganisms that are mainly planted in the human intestines and reproductive system (26). They are beneficial for the host and are made from a single strain or a combination of multiple strains of bacteria. The mechanism of probiotics in treating functional constipation may be through the stimulation of cholecystokinin and deconjugation of bile salts, resulting in free secondary bile salts that can stimulate colonic motility or lower colonic pH, and through the production of other short-chain fatty acids, which may stimulate peristalsis (27-29).

An important advantage of our analysis is that it focuses on a well-defined single bio-probiotic microorganism, L. reuteri DSM 17938. Thus, our results precisely defined the effects of the administration of L. reuteri DSM 17938 in patients with FC. Decreased number of bowel movements is one of the important diagnostic criteria for functional constipation, and the increase in the number of bowel movements after oral probiotics is not only a manifestation of the relief of functional constipation, but also helps to alleviate anxiety and improve the quality of life of patients, it has important clinical implications.

However, there are also many limitations to this analysis. Gray literature was not retrieved, and the search language was limited to Chinese and English. There was also variation in not only the number of trials but also the sample sizes in the trials. There are few criteria used for evaluating the effect of L. reuteri DSM 17938 for FC, but this study included only the number of bowel movements and stool consistency. In addition, it should be stated that although Riezzo's research lasted for 105 days, Flavia's research lasted for 12 weeks, we still included those in the statistics. It is because their experiments have produced clinical effects in 4-8 weeks, and there is no significant difference between the 12th week and the week before.