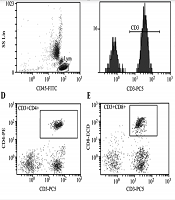 To investigate the effects of OSAHS on T-lymphocyte subgroups and natural killer (NK) cell activity in the peripheral blood of affected children.

A total of 85 children with OSAHS were enrolled into an experimental group (OSAHS) and 76 healthy children were placed in a control group (CON) to compare peripheral blood levels of CD3+, CD4+, CD8+, and NK cell activity using flow cytometry. Meanwhile, their polysomnography results were monitored to analyze the correlation between T-lymphocyte subgroups/NK cell activity and lowest pulse oxygen saturation (LSaO2)/apnea-hypopnea index (AHI).

The third edition of the International Classification of Sleep Disorders separates sleep-related apnea into obstructive sleep apnea (OSA) syndrome, central sleep apnea syndrome, sleep-related hypoxia, and sleep-related hypoxemia (1). Obstructive sleep apnea-hypopnea syndrome (OSAHS) tends to impact preschool children (2), possibly because children at this age are in the productive period of tonsil and adenoid hyperplasia, which occupies a significant amount of space in the upper respiratory tract (3). Children in this developmental stage may restore their physical strength via good sleep, thus promoting intelligence and growth. Children with OSAHS may repeatedly suffer from hypoxia and hypercapnia due to frequent apnea and hypopnea during sleep, resulting in potential damage to multiple organsystems as well as the immune function of the body. Adenoid and tonsil hypertrophy is the main cause of OSAHS in children. Thus, removal of the adenoids and tonsils is an effective treatment method for children with OSAHS. However, adenoids and tonsils play important roles in childhood immune defense, so the pros and cons of actively treating OSAHS has become the focus of many researchers and parents (4-8).

T-lymphocytes are a large cell population with important regulatory functions in the body’s immune system. The total and subpopulation numbers are important indicators for the evaluation of cellular immune function (9). Each T-lymphocyte subset interacts to maintain the balance of immune function. At present, it is believed that one of the more reliable methods for understanding the cellular immune status of the body is to analyze T-lymphocyte subset changes in peripheral blood. The most common method for classifying T-lymphocyte subsets is to separate them into different functional subpopulations based on cell surface markers using monoclonal antibodies. Mature T-lymphocytes express CD3+ molecules on the surface, and mature T-lymphocytes are divided into two subgroups (CD4+ T cells and CD8+ T cells) according to their surface markers. CD4+ T cells are T helper cells, and CD8+ T cells are T suppressor cells. These two cell types interact to maintain the stability of the body’s immune function (10). Monitoring of T helper cells and T suppressor cells can determine whether the functional status of the human immune system is normal.

Natural killer (NK) cells play immunological surveillance and regulation roles in the body, providing a natural defense against pathogens and serving as an important evaluation index for non-specific immunity (11). Detecting T-lymphocyte subsets and NK cell activity can also help to clarify the status of the body’s immune system function.

3) There were no abnormalities in the birth, feeding, and growth histories of any children diagnosed with OSAHS.

1) A history of recent or repeated upper respiratory tract infections.

2) Abnormalities in the congenital anatomy, such as th emouth, nose, or pharynx, that affect ventilation.

3) A history of allergic rhinitis, asthma, or other diseases that affect immune function.

4) A history of chronic diseases in important organs, such as the heart, brain, or kidneys.

CON group: At the same time, a total of 76 healthy children without related or systemic diseases were enrolled in our hospital, including 54 boys and 22 girls aged 3 – 10 years with an average age of 6.8 years. The selected cases had no history of cold four weeks prior to the study; no history of allergic rhinitis, asthma, or other diseases that affect immune function; and no history of nasal polyps, adenoids, tonsil hypertrophy, obesity, or other systemic diseases. General examinations of the two groups (thorax X-ray, electrocardiogram, coagulation function, blood routine, and complete biochemical analysis) were in the normal ranges. The general data, such as age, sex, and body mass index between the two groups, are shown in Table 1.

This study was conducted in accordance with the Declaration of Helsinki andapproved by the Ethics Committee of Fujian Medical University. Written informed consent was obtained from all participants’ guardians.

A multi-channel sleep monitor produced by ResMed (ApneaLinkTMPlus; San Diego, CA, USA) was used for at least 7h of monitoring from going to sleep at night to awakening the next morning. The monitoring items included nose and mouth airflow, chest and abdomen movement, and oxygen saturation (SpO2). The AHI, LSpO2, and mean blood oxygen saturation (MSpO2) were calculated based on the monitoring results.

2.6. Collection and Determination of Specimens

Specimen collection: In the OSAHS group, 2 mL of venous blood was collected by an assigned nurse on the second day after admission and injected into a heparin sodium-covered anticoagulation tube. Blood from the CON group was collected by an outpatient nurse when fasting on the day of the physical examination. The blood collection time for both groups was 7:00 - 8:00 in the morning. The collected blood samples were tested for lymphocyte subsets by the same flow cytometer in our laboratory.

Working principle: Antibodies were selected from the Beckman Coulter Cytolymphocyte Subgroup Reagent CYTO-STAT CD45-FITC/CD4-RD1/ CD8-ECD/CD3-PC5 (LOT 7536243f) and CD45-FITC/CD56-RD1/CD19-ECD/ CD3-PC5(LOT7580190F). Different antibodies were labeled with fluorescein. When the fluorescent antibody specifically bound to the antigen molecule on the cell surface through the antigen-antibody reaction, the cells were stained with fluorescein. The flow cytometer focuses the shaped laser beam to irradiate the high-speed flow cells that have been stained and measures the intensity of scattered light and fluorescence generated on the stained cells for analyzing the expression of the corresponding protein on the cell surface to achieve rapid quantitative determination of the cells. 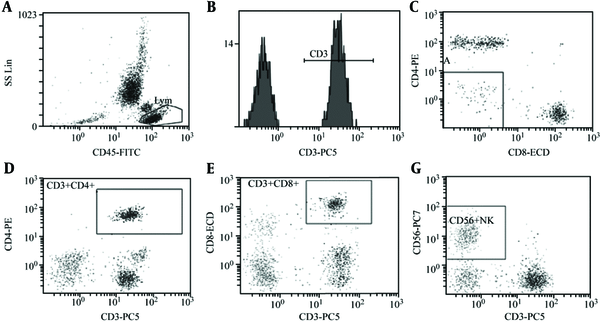 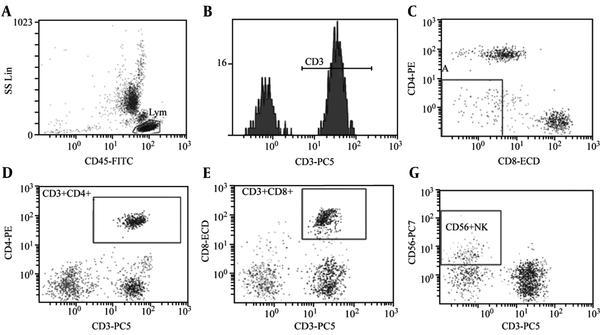 a Statistical significance when compared with group SEV (P < 0.05).

Table 5. Correlation Of T-Lymphocyte Subsets and NK Cell Activity in Peripheral Blood with AHI and Lsao2 in Group OSAHS (r)

OSAHS is a common and easily overlooked sleep-disordered breathing disease. Tonsils and adenoids have important immune defense functions in childhood, though the main method of treating OSAHS in children is to remove their tonsils and adenoids. Childhood is a critical period of growth and development. OSAHS in children can affect multiple organs and systems, especially the immune system, these children often suffer from slow ENT diseases such as rhinosinusitis, conductive deafness, speech disorders, etc. (13), which has attracted significant attention in recent years.

In the case of good health, the proportions of lymphocyte subgroups are in a relatively stable range. Once the value is not in this stable range, the body's immunity will be destroyed. At present, there is no uniform reference value range for peripheral blood lymphocyte subgroups, and studies have shown that normal situation CD4+/CD8+ > 1, the younger the age, CD4+/CD8+ is bigger. CD4+/CD8+ < 1 indicates that the T-lymphocyte subsets are abnormal (14).

The causes of OSAHS influence on cellular immune function may be as follows: 1) Children suffer from hypoxemia caused by repeated sleep apnea at night, which may further affect the immune function by affecting neuroendocrine system activity (17). 2) Children with chronic hypoxia and hypercapnia suffer from chronic damage to various systems and organs, resulting in low immune function. 3) Children with long-term open-mouth breathing during night time sleep may cause cold dry air to directly enter the respiratory tract, increasing the likelihood of bacterial or viral infection and resulting in low immune function. In addition, tonsils and adenoids often cause immune responses due to antigen stimulation, thus resulting in lymphoid tissue hyperplasia, further aggravating OSAHS symptoms and creating a vicious circle. However, the exact mechanism underlying how OSAHS affects immune function remains unclear.

Regarding the effect of OSAHS on non-specific immunity in children, the results of this study showed that NK cell activity in children with OSAHS was significantly lower than that in normal children, suggesting that OSAHS may cause a decline in non-specific immune function. The reasons may be as follows: 1) The number and activity of NK cells in children with OSAHS are decreased due to a night time sleep structural disorder that can be gradually reversed with sleep recovery, suggesting that this immune change is related to sleep (18). 2) The surface of NK cells can express receptors corresponding to both inhibitory and activating functions. The inhibitory receptors mainly include CD94/NKG2A and killing immunoglobulin-like receptors (2DL and 3DLl), and the activating receptors primarily comprise NKG2D and natural cytotoxic receptors (NKp30, NKp44, and NKp46). Studies have confirmed that hypoxic microenvironments can downregulate the expression of NKG2D while NKG2A expression remains unaffected, which in turn leads to an imbalance in the expression of NKG2D/NKG2A receptor molecules and can be one of the reasons for the decrease in NK cell activity (19). 3) The decrease in interleukin 2 activity during hypoxia can also reduce NK cell activity and impair cellular immune function (20, 21). There were no significant differences in NK cell activity among the different subgroups of children with OSAHS in this study. Therefore, identifying the potential limit to the effects of OSAHS on NK cell activity in children requires further investigation.

Regarding the influence of disease course on the immune function of children with OSAHS, this study found that the T-lymphocyte subsets and NK cell activity in the peripheral blood of different subgroups (based on the course of disease, < 3 years and ≥ 3 years) showed no statistical significance, which was inconsistent with the expected results. The possible reasons for this finding are as follows: 1) Most children with OSAHS paid insufficient attention to the disease and could not accurately describe the specific onset period. 2) The number of cases in this study was small, and the rationality of defining the age of disease onset between different subgroups still requires further exploration. 3) The immune function of children with OSAHS may be affected by many factors.

Among the PSG indexes, AHI is a qualitative and quantitative index of sleep disorders, and LSaO2 can reflect the maximum degree of hypoxia in children during nighttime sleep. In this study, the proportions of T-lymphocyte subsets and NK cell activity in the peripheral blood of children with OSAHS were identified and utilized in correlation analyses with AHI and LSaO2. The results revealed that the percentages of CD4+, CD4+/CD8+, and NK cell activity decreased while the percentage of CD8+ increased, which was related to clinical severity and consistent with most existing studies (22).

The following shortcomings exist in this study: 1) The number of cases was small. 2) We did not perform post-treatment studies on the T-lymphocyte subsets and NK cell activity in the peripheral blood of children with OSAHS. Although the aforementioned studies have confirmed that OSAHS can lead to a decline in the body’s immune function, further studies on the immune function of children with OSAHS may provide more powerful evidence and will comprise the next step of our study.

The study was fund by Fujian Quanzhou Science and Technology Bureau Project (2015Z62).