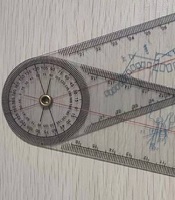 Concealed penis is an anomaly in infants and adolescents, accurate diagnosis of different types of which requires extensive experience. In general, an experienced physician can diagnose the type of abnormal penis by careful observation and then provide the corresponding treatment. The appearance of trapped penis and webbed penis is easier to distinguish than that of other abnormal penises. However, congenital concealed penis is easily confused with phimosis and obesity concealed penis, and it is not easy to distinguish clinically, especially for inexperienced physician.

This study aims to provide an auxiliary measurement method to assist diagnosis of concealed penis types.

This study enrolled 105 children diagnosed as phimosis, 88 as congenital concealed penis, and 78 as obesity concealed penis. Multifunctional protractor was used to measure the foreskin angle and penis-scrotum angle. The foreskin angle was defined as the angle between the ventral and dorsal sides of the penis body and the line extending to the foreskin, which was the sagittal position of the natural state of the penis when the child lies down. The penis-scrotum angle was defined as the angle between the ventral side of penis and the scrotum. All measured data were recorded by professional physicians, and the differences between different groups were compared using t-test.

This evaluation system can provide an auxiliary way to help the diagnosis of different types of concealed penis in children and provide a basis for subsequent treatment. In addition, Experienced physicians teaching new physicians/students, can also use this as an auxiliary explanation.

A concealed penis is a congenital anomaly that affects the appearance and function of genitalia in children and adults. The causes of concealed penis mainly include inadequate outer penile skin, narrow opening of the prepuce, hypoplasia of the penile sarcolemma, lack of elasticity, abnormal attachment of the sarcolemma to deep tissues, inadequate subcutaneous attachment to Buck’s fascia, fat accumulation above the pubic arch, and a tight phimosis (1-4). A literature search indicated that there are several classifications of concealed penis. In 1977, Crawford described the terms of concealed penis, buried penis and webbed penis (5). Based on the mechanism of concealment, Maizels et al. (6) described a classification of 4 subtypes, including buried penis, trapped penis, webbed penis and micropenis, which are helpful for understanding pathophysiology (7, 8). Shirley Tsang demonstrated that micropenis is different from concealed penises, which was further categorized as buried penis, webbed penis and trapped penis (9). A micropenis is characterized by a small penis with a median raphe, glans and no hypospadias. In contrast, concealed penis is normal in size but looks small, and is concealed in the subcutaneous tissue. Buried penis is a typical-sized penis that is enclosed in the fat pad due to lack of skin attached to the shaft. Trapped penis refers to the penis wrapped by dense cicatricial scar, usually caused by excessive circumcision. Webbed penis is caused by the scrotal skin extending to the abdominal penis, resulting in the penis buried in the scrotum or tethered to the scrotal midline by a fold or web of skin. These abnormal penis types are more common in infants and prepubertal boys. Most patients or these parents will seek medical consultation for their abnormal penis appearance. In general, an experienced physician can diagnose the type of abnormal penis by careful observation and provide the appropriate treatment. Trapped penis and webbed penis are easier to distinguish from another abnormal penis. However, congenital concealed penis is easily confused with phimosis and obesity-caused concealed penis (named obesity concealed penis in this study), especially for non-clinical personnel or inexperienced physicians. Excessive suprapubic fat is also the cause of concealed penis in children (10). For concealed penis caused by obesity, the penis may gradually return to normal after weight loss. However, reconstruction or surgery for the concealed penis will be delayed when the condition is mistakenly attributed to the patients’ obesity.

Concealed penis not only affects the appearance of males, but long-term penile concealment also affects its structure and function (11). These anomalies are often accompanied by multiple urologic concerns in adulthood, including sexual dysfunction, voiding dysfunction, and health problems. As a result, these patients often suffer severe psychological distress, and their quality of life may be negatively affected, especially in terms of body image and psychology (12-14). Surgical repair is still the primary treatment for concealed penis (15). Devine surgery and modified Devine surgery were often used for children with congenital concealed penis and showed good postoperative outcomes (10, 16). However, the identification of congenital concealed penis and obesity concealed penis still lacks auxiliary diagnostic indicators. The type of concealed penis is usually distinguished based on the experience of the physician. However, it will not be easy for inexperienced physicians to identify different types of concealed penis, and thus some patients may receive the unnecessary surgery or delayed treatment. This unnecessary treatment does not improve the disease and makes subsequent corrective treatment more difficult (17-19) and brings huge psychological stress on patients (4).

Therefore, there is an urgent need to provide an auxiliary recognition method to provide clinicians in determining the type of concealed penis of patients and reduce the occurrence of misjudgments.

From July 2016 to September 2018, a total of 271 children over 6 months of age were recruited from Xuzhou Children’s Hospital in China. This study was conducted in accordance with the Declaration of Helsinki, and the protocol was approved by the Ethical Committee of Xuzhou Children’s Hospital (#ETYY2016037). Written informed consent has been obtained from the patients or legal guardians of all children. The participants were recruited based on the diagnostic criteria of Campbell-Walsh Urology, 11th edition,

The type of concealed penis was independently diagnosed by two physicians, and the disagreements were resolved by a third physician with more than 10 years of experience. After diagnosis, 105 cases were diagnosed as phimosis, 88 cases as congenital concealed penis, and 78 cases as obesity concealed penis. The foreskin angle, penis-scrotum angle, and number of annular wrinkles of foreskin surface of all 271 participants were independently measured by two professional technicians of our hospital. Foreskin angle and penis-scrotum angle were measured using a professional protractor (Brand: CARENT, Figure 1). The inclusion criteria were (1) the child has a concealed penis, and the type of concealed penis was diagnosed as phimosis or congenital concealed penis or obesity concealed penis; (2) children under 13 years old; (3) the penis has no other serious deformities or penile-related diseases. The exclusion criteria were (1) the penis of the child has serious deformities or penile-related disease; (2) parents or legal guardians refused to participate in this study or did not obtain a signed informed consent. The foreskin angle was defined as the angle between the ventral and dorsal sides of the penis body and the line extending to the foreskin, which was the sagittal position of the natural state of the penis when the child lay down (Figure 2). The penis-scrotum angle was defined as the angle between the ventral side of penis and the scrotum (Figure 3). Except for the natural wrinkles around the outer foreskin, other wrinkles that were more than one-half of the circumference on the surface of the penis body were classified as annular wrinkles (Figure 4). All data were recorded by professional physicians, and differences between different groups were compared using t-test. All analyses were performed by IBM SPSS statistical software version 22 (IBM Corp., Armonk, New York, USA). A two-tailed P value < 0.05 was considered statistically significant. 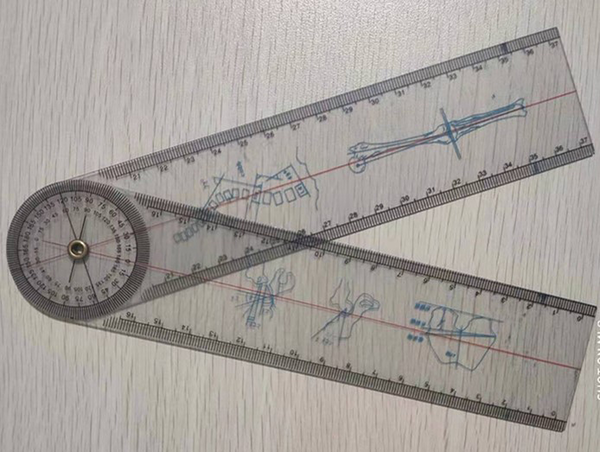 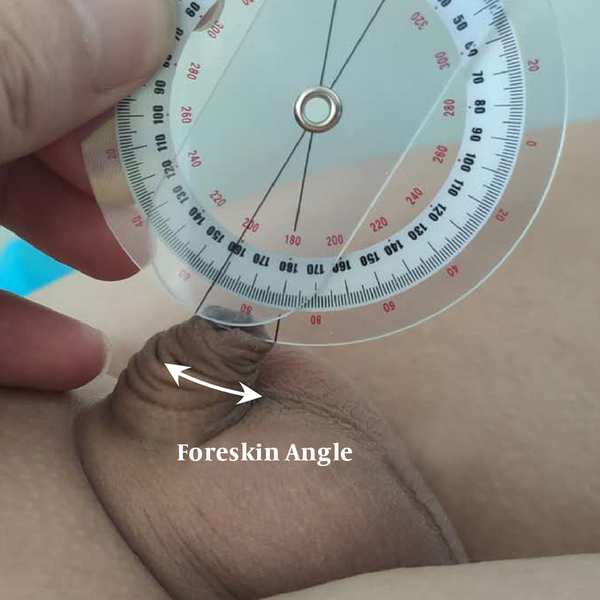 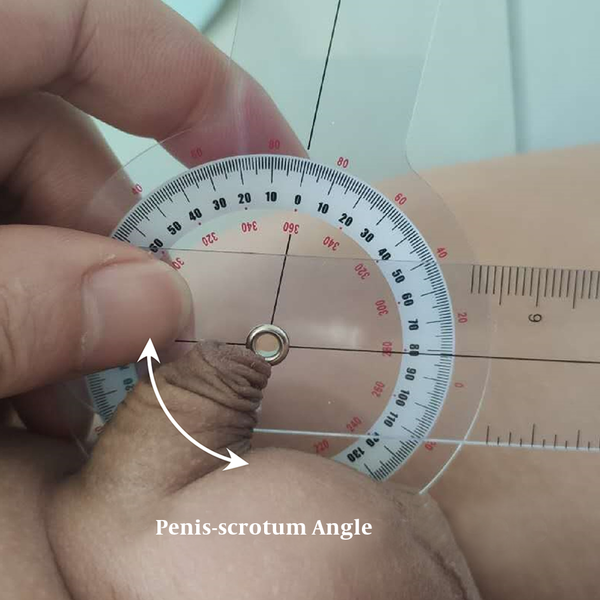 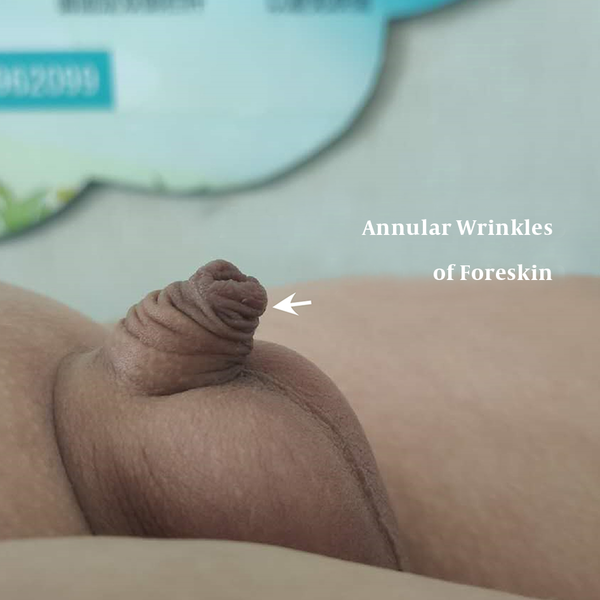 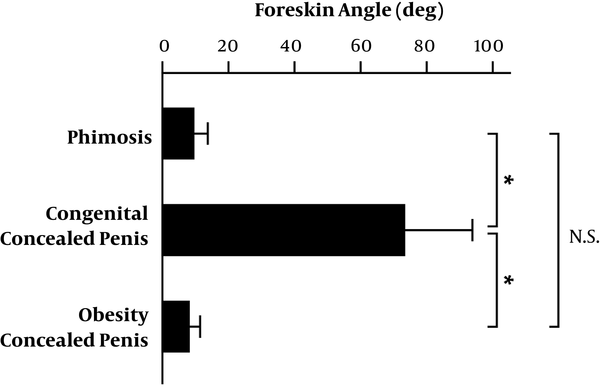 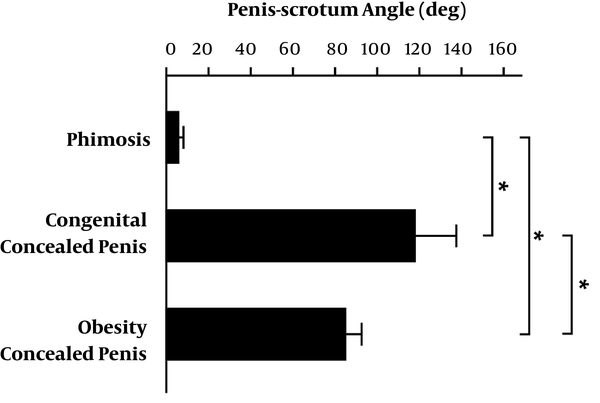 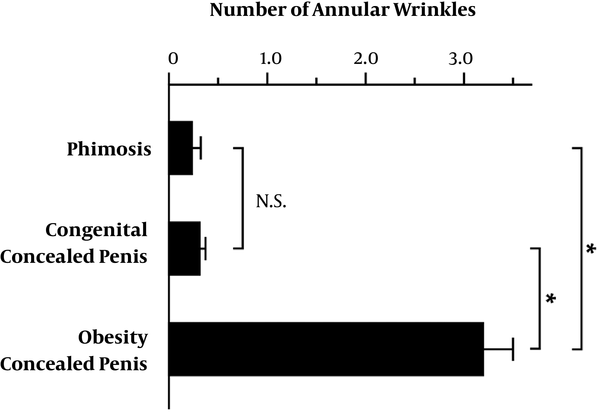 The design of this study is based on the beak-like (or pagoda-shaped) or earthworm-like appearance of the concealed penis. Clinically, congenital concealed penis and obesity concealed penis were the most common cause of penile surgery in children. Congenital concealed penis was formed due to inadequate proximal attachments of dysgenetic dartos and appropriate or excessive attachment to the dorsal cavernosum (20, 21). Dartos dysplasia and abnormal fixations hinder the exposure of the penis. During the development of the penis, these constraints gradually extrapolate to form a typical “beak-like” or “pagoda-like” appearance, which leads to abnormal foreskin angle and penis-scrotum angle. On the other hand, excessive fat in a boy who is obese may also contribute to the appearance of obesity concealed penis. Due to the accumulation of fat in children, the penis body is relatively retracted, causing the wrinkled outer skin to look like earthworms. The clinical manifestations are that the penis body is not easy to touch from outside the foreskin, and the annular folds on the surface of the foreskin are obviously deepened and increased. In view of this phenomenon, we added an annular wrinkles index to explore the differential diagnostic assistance of different causes of concealed penis. The final results of this study confirmed that these three indicators can effectively distinguish congenital concealed penis, phimosis and obesity concealed penis in children.

A micropenis is characterized by the smaller penis than normal, which is easily diagnosed by clinician or personnel. If the length of the extended penis is less than 2.5 standard deviations from the normal mean, it can be considered as a micropenis. However, the length of concealed penis is normal, so in addition to the clinical characteristics for judgment, development of other measurement methods are needed. Chin et al also developed an auxiliary way to quantify the severity of buried penis by determining the length of the penile skin (S) and the exact length of penile shaft (P) (4). They demonstrated that only patients with S/P ratio < 70% are considered to be suitable for preputial unfurling. Although it is not mentioned whether S/P ratio can be used as a distinction between congenital concealed penis and obesity concealed penis in children, Chin et al. suggested that diet control or liposuction would be a better way for patient with concealed penis due to obesity. In addition, the S/P ratio method was applied for patients ranging from 2 months to 33 years old. However, our auxiliary measuring method was currently suitable for children below 13 years old, not suitable for teenagers and adults. We believe that the measured angles of the children will change during the development of the penis. It’s worthwhile to conduct more in-depth studies in the future to explore whether these two strategies can be used in combination, and whether our auxiliary methods can be applied to patients of different ages.