Congenital Angiosarcoma, a Case Report and Review of Literature 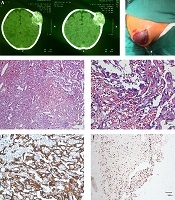 Angiosarcoma, originating from vessels, constitutes about 0.2% to 0.3% of all pediatric soft tissue sarcomas. Prognosis of angiosarcoma is poor and depends on patient’s age, tumor location, size, histological grade and extent of tumor progression.

We report a rare case of a congenital angiosarcoma of scalp with dural and skull bone invasion in a one-month-old boy. His mother noticed the mass 2 days after birth as a very small insignificant nodule, but it grew rapidly afterward.

The treatment consisted of only a wide surgical resection. After 15 months there was no sign of local recurrence or metastasis was noticeable and the tumor showed favorable outcome. This case indicates the possibility of a better clinical behavior in congenital angiosarcoma.

Soft tissue sarcomas are mesodermally derived malignant tumors from muscle, fat, cartilage, bone, nerve, fibroblast and vessels, accounting for about 8% - 10% of all cancers of children or young adults (1). Angiosarcoma, originating from vessels, constitutes about 0.2% to 0.3 % of all pediatric soft tissue sarcomas (2, 3). It can occur in any site in the body, however the majority of adult cases have been reported in skin and superficial soft tissue of head and neck region (4) but in children most reported cases originated from mediastinum, pericardium and heart (5). There are also rare case reports of congenital and intrauterine angiosarcoma (6).

Angiosarcomas have been reported as aggressive tumors with poor prognosis (7), however the prognosis depends on factors such as tumor size, grade, and patients’ age. In this article we report a rare occurrence of a congenital angiosarcoma of scalp with dural and skull bone invasion and a favorable outcome.

A one-month-old boy born by caesarean section presented with large scalp mass (3 × 3 cm). His mother noticed the mass two days after birth as a very small insignificant nodule. The nodule grown rapidly and he was referred to our center at one month of age. Patient’s birth weight was 3100 grams and he was a well baby without any other problem.

Physical examination was unremarkable except the mentioned scalp mass measuring about 3 × 3 cm in the left parietal area.

Parents had a history of infertility for 10 years and both of them had received gonadotropin-releasing hormone agonist (GnRH). The father had multiple sclerosis for 15 years and was treated with interferon. 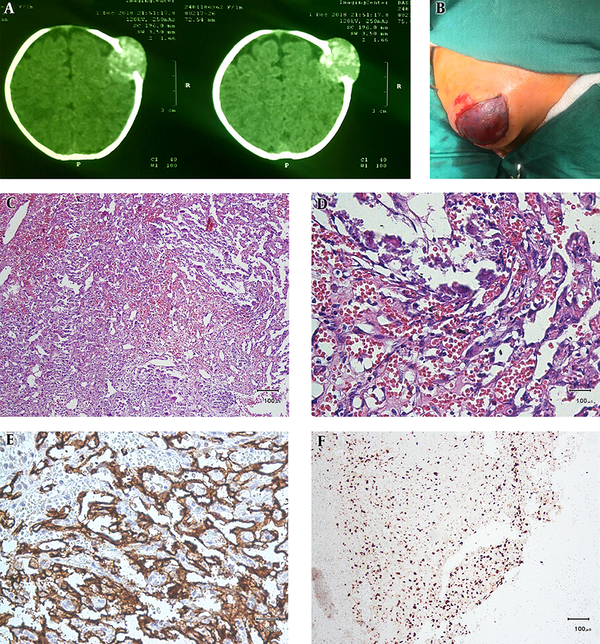 Laboratory data were unremarkable except for hemoglobin of 10 g/dL. Renal as well as liver function tests were normal.

No evidence of any vascular malformation or tumor was detected in other sites of the body.

The bulging red mass was excised by neurosurgeon. At the time of first surgery the tumor showed obvious dural invasion and underlying dural perforation (Figure 1B).

Microscopic examination of multiple fragments of bone and soft tissues showed a highly vascular tumor with hyperchromatic atypical nuclei and many mitotic figures (about 6 per 10 high power fields (HPF)) with focal microscopic necrosis. Bony tissue labeled as temporal bone was also involved by tumor. The vascular spaces were interconnected and abnormal (Figure 1C and D).

The patient underwent another surgery and a segment of dura which has been invaded by the tumor was resected again. The dural tissue showed macroscopic and microscopic invasion by tumor with the same morphology.

According to the large size, high mitotic figure and high proliferative rate, diagnosis of angiosarcoma was made. Clinicians decided to closely follow the patient and no chemotherapy was instituted.

Fortunately, after 15 months there was no signs of local recurrence or metastasis noticeable.

Angiosarcoma is a rare tumor mainly seen in elderly adult patients. It is uncommon in children and there are rare case reports in children from 3 months to 16 years (8). There are also rare case reports of congenital angiosarcoma presented as intrauterine mass or diagnosed after birth. Our case can be considered congenital because his mother detected the mass in his second day of life.

Angiosarcomas (AS) are classified in five groups based on the clinical presentation and tumor site: cutaneous AS, deep Soft tissue AS, visceral organ AS, radiation and lymphedema associated AS (13).

Rapid growth and invasion to adjacent tissue, precludes exact determination of the tumor origin. However, its most common location in adults is skin and superficial soft tissue of head and neck (14). In children case reports are very rare, however, here too the favorite location seems to be head, neck and mediastinum (8).

Cutaneous AS presents as purple nodule with or without ulceration (15).

In our patient, the tumor was located in the head and neck (scalp area). It was first detected by the mother and appeared to have originated from the soft tissue with invasion to bone and dura. Benign vascular lesions are more common in children and important malignant tumors such as rhabdomyosarcoma should be ruled out. Rhabdomyosarcoma is a small round cell tumor and is negative for vascular markers like CD31 and CD34. Hemangioendothelioma has not the branching anastomosing vessels that is typical of angiosarcoma. In conclusion, clinical behavior of the tumor, imaging of the patient with dural extension and histologic pictures of the tumor with branched intercalating vessels lined by highly atypical cells and presence of many mitosis and the result of IHC study with high Ki67 and positivity of tumor cells for vascular markers all helped us to diagnose angiosarcoma even with regard to its rarity.

According to AJCC, TNM system, our patient had a well differentiated tumor (G1) and was in T2a stage in opposite to most of the angiosarcomas that were in an advanced stage at presentation.

Because of the rarity of this tumor in children, information about the long term effect of treatment modalities is sparse. Currently, the most commonly used treatment is wide surgical excision. If the complete excision is not unachievable, radiotherapy and sometimes chemotherapy can be started. Radiotherapy is more commonly used when the margins are involved to prevent local recurrence. The effect of chemotherapy is still unclear (14, 16).

Overall prognosis of angiosarcoma is poor and depends on patient’s age, tumor location, size, histological grade and extent of tumor progression (7). The reported outcome in children is also poor but our case and two other cases of congenital cerebral angiosarcoma reported by Suzuki et al. (9) and Kirk et al. (10) had good prognosis even without any other treatment except for wide surgical excision.

In the study performed by Ferrari et al on 18 patients with malignant vascular tumors, 4 patients had no recurrence after 5 years. Size of tumor in 3 of them was less than 5 cm, so complete surgical excision was feasible and no further treatment was instituted in the patients (17).

Our case and above mentioned congenital cases of angiosarcoma with good prognosis were also less than 5 cm in size and were treated solely with wide surgical resection. Thus, the small size of tumor and feasibility of complete surgical resection can be considered as good predictors of favorable outcome in these patients.

This case depicts a favorable clinical behavior of congenital angiosarcoma, however the number of cases in the literature are still very few to make a definite suggestion.