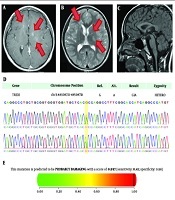 Organic lesions, including brain tumors, should be suspected in boys with precocious puberty. However, it is not usually suspected in children with early puberty.

This is the first case report of rapidly progressing early puberty caused by germinoma of bilateral basal ganglia associated with pathogenic variant of TREX1.

Precocious puberty can be defined as the appearance of secondary sexual characteristics occurring earlier than two standard deviations of the population mean. It can be classified into gonadotropin-dependent (central) and gonadotropin-independent (peripheral) puberty. The majority of central precocious puberty (CPP) is idiopathic, but organic lesions of the central nervous system, such as brain tumors, are more often discovered in boys than in girls. There are many etiologies of peripheral precocious puberty (PPP), such as hormone-secreting tumors, and exogenous hormone exposure (1). Organic lesions including brain tumors should be suspected in boys with precocious puberty, but organic brain lesion is not usually suspected in children with early puberty.

Germinomas are the most common cause of all germ cell tumors (GCTs), and the clinical manifestations depend on their locations, including hemiparesis, diabetes insipidus, and precocious puberty. Intracranial germinomas are exceedingly rare and account for only 0.5 - 2.1% of all primary brain tumors. GCTs of the central nervous system (CNS) usually develop in the midline of the pineal and suprasellar regions. Approximately 5% to 10% of intracranial germinomas can also occur in the basal ganglia and/or thalamus (2), but involvement of both sides of the basal ganglia by germinoma is extremely rare.

Mutations in the three-prime repair exonuclease 1 (TREX1) usually decrease or abolish exonuclease function. These are known to be associated with Aicardi-Gouitères syndrome, systemic lupus erythematosus, and familial chilblain lupus (3, 4). Recently, several studies have reported the association between TREX1 and carcinogenesis in gastric cancer and cervical cancer (5, 6).

In this case, we present a 10-year-old-boy with rapidly progressing early puberty associated with basal ganglia germinoma.

A 10-year-old boy with borderline mental retardation visited our pediatric endocrinology clinic for rapidly progressing pubertal symptoms which had suddenly begun two months before visiting the clinic. The patient had no specific perinatal or family history. Physical examination revealed 10 mL testes and about 6 cm penis (Tanner stage 3 for genital development) as well as left microtia. The height and weight placed him in the 75 - 85th percentile (143.3 cm) and 50 - 75th percentile (38.9 kg), respectively, for his age and sex. He showed impaired speech fluency and distractibility. Neurological examination showed right-sided weakness of the body with hyperreflexia. The cerebellar function test was found to be abnormal on the right side.

Table 1. The Characteristics and Hormone Levels of Patient with Basal Ganglia Germinoma Before and After Treatment (Chemotherapy and Radiation Therapy)

Imaging studies were performed for suspected β-hCG secreting tumor. There were no remarkable findings in abdominal and scrotal sonography. However, the sella magnetic resonance imaging (MRI) revealed intermediate to high signal intensity on T2-weighted image with contrast enhancement on T1-weighted image in bilateral basal ganglia and right frontal periventricular white matter, suggesting germinoma (Figure 1A and B). There were no remarkable findings in the pituitary gland, hypothalamus, or pineal gland (Figure 1C). 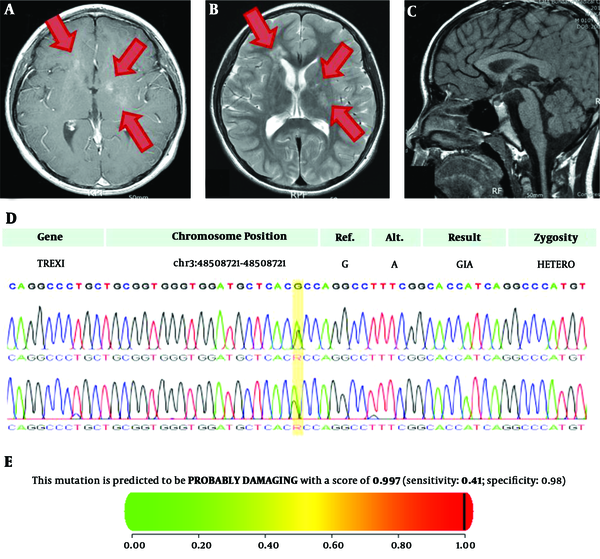 A stereotactic biopsy was conducted and a germinoma was confirmed. The patient received three cycles of combination chemotherapy, consisting of etoposide, carboplatin, and 72 Gy of radiation therapy.

Despite notably decreased tumor lesions after treatment, his pubertal symptoms continued to progress rapidly. After 6 months, at the age of 10.5 years, his bone age was advanced up to 13 years of age. The peak LH level was elevated to 17 mIU/mL in the GnRH stimulation test (Table 1). Gonadotropin-releasing hormone agonist (GnRHa, triptorelin 3.75 mg, every 4 weeks) treatment was started due to begin of central puberty.

The patient complained of lethargy, general weakness, and loss of appetite, moreover, low blood pressure (85/50 mmHg) was observed. Combined pituitary function tests were performed to assess pituitary function, but all anterior pituitary hormones showed normal response (basal cortisol: 10.8 μg/dL, peak cortisol: 20.2 μg/dL). His echocardiogram was normal. He started to take hydrocortisone 5 - 10 mg for body surface area due to clinical suspicion of adrenal insufficiency, and symptoms seemed to be improved. The GnRHa treatment was maintained for one year and discontinued at 14 years of his bone age.

He was followed up regularly for two years without any sign of recurrence. However, his height measured 152.1 cm (25 - 50th percentile) and the height for his BA was far below the 3rd percentile.

Due to an unusual type of intracranial germinoma with mental retardation, whole exome sequencing (WES) was performed and the pathogenic variant of TREX1 was revealed. This variant was confirmed by Sanger sequencing (Figure 1D). It showed the heterozygous variant c.G832A on TREX1 changes an amino acid Ala to Thr at codon 278 in exon 1 (TREX1:c.G832A). Based on American College of Medical Genetics and Genomics (ACMG) guidelines, this variation has one strong, two moderate, and two supporting levels of evidence (https://omim.org/entry/606609/). This variant changes the Ribonuclease H-like domain (https://www.uniprot.org/uniprot/Q9NSU2/) without benign variation, and is absent in controls (https://www.internationalgenome.org/, https://gnomad.broadinstitute.org/), with multiple lines of computational evidence of gene product; MetaSVM (https://omictools.com/meta-svm-tool/), GERP++ (https://omictools.com/gerp-tool/). In silico analysis revealed that, the missense variant in TREX1 c.832G>A, p.A278T was likely to be a damaging variant (score 0.997) as per Polyphen-2 (8) (Figure 1E) and damaging based on SIFT (score 0.020, cut off 0.05) (https://sift.bii.a-star.edu.sg/). Splice-site analysis showed variable results. Net gene 2 (https://www.cbs.dtu.dk/services/NetGene2/) and Splice site prediction showed no change in the splicing site (https://fruitfly.org/seq_tools/splice.html), but Mutation Taster (http://www.mutationtaster.org/) showed changes in the splicing site (score 0.36).

A buccal swab sample was obtained from the patient to extract genomic DNA. WES was performed using SureSelect. Human All Exon V6 (Agilent, Santa Clara, CA, USA), following the manufacturer’s protocol, followed by sequencing using the NovaSeq platform (Illumina, San Diego, USA). Mean depth of coverage was 100× (>10×=99.2%). Pathogenicity of each variant for associated disease was evaluated according to recommendations of the ACMG and Association for Molecular Pathology (AMP) guidelines (9).

In this case, we reported an extremely rare case of bilateral basal ganglia germinoma in a boy with TREX1 variant, which presented with rapidly progressing early puberty.

Germinomas account for approximately two-thirds of GCTs and usually develop in the midline at the pineal and suprasellar regions. However, they may arise from an ectopic site, most notably the basal ganglia and thalamus, which is extremely rare. Interestingly, intracranial germinoma involving basal ganglia occurs predominantly in Eastern Asian countries, including Japan, with a male predominance (10).

The clinical manifestations of germinoma can vary, depending on its locations. Takeda et al. (2) studied 109 patients with basal ganglia germinoma, and hemiparesis was the most common symptom. Other symptoms were change of character, mental retardation, precocious puberty, and diabetes insipidus. Furthermore, precocious puberty can be the sole clinical manifestation. Since β-hCG and LH possess an identical α-subunit and a similar β-subunit, the secretion of β-hCG can stimulate Leydig cells to induce precocious puberty (11). These clinical symptoms are usually known to progress slowly, with an average period of about 1.5 years, ranging from one month to 4.5 years. In our case, hemiparesis seemed to have progressed similar to other germinomas, but the patient’s pubertal symptom was rapidly progressive within two months.

TREX1 is the major cytoplasmic 3’-5’ DNA exonuclease in mammalian cells (12). TREX1 mutations usually decrease or abolish exonuclease function. These are known to be associated with neurologic or autoimmune diseases such as Aicardi-Gouitères syndrome, systemic lupus erythematosus, and familial chilblain lupus (3, 4). Recently, several studies have reported the association between the TREX1 and tumorigenesis. Prati et al. (6) indicated that TREX1 upregulation was an important factor for the growth of cervical tumor cells and may contribute to tumor progression. Also, malfunction of DNA mismatch repair genes, including TREX1, has been reported to be associated with a risk of gastric cancer by causing microsatellite instability (5). Vanpouille-Box et al. (13) identified TREX1 as a key determinant for the limited immunogenicity of cancer cells responding to single high-dose radiation. The role of TREX1 in carcinogenesis is still unclear, but recent studies have shown that the alteration of TREX1, which is essential for DNA damage repair and elimination of cytoplasmic DNA, consequently preventing the activation of innate immune mechanisms, may lead to cancer development (6).

The pathogenesis and underlying genetic abnormalities of CNS germinoma are not well known. Recent case reports of germinoma in the CNS associated with chromosomal abnormalities include Down syndrome (14) and Klinefelter syndrome (15). In a genome-wide analysis in 49 cases of CNS germinomas, it was reported that CNS germinomas were characterized by global demethylation, chromosomal instability, and mutational activation of the Kit-, Ras/Raf/Erk- and Akt-pathways (16). To our knowledge, this is the first case of germinoma associated with the TREX1.

Germinoma is highly sensitive to radiotherapy and/or chemotherapy and is potentially curable without surgery, leading to a good prognosis and high chance of long-term survival. However, early diagnosis of basal ganglia germinoma is usually difficult, owing to its rare location and nonspecific symptoms. If the diagnosis is delayed, the disease can become disseminated and may result in permanent neurological deficits.

Organic CNS causes of precocious precocity should be ruled out by brain MRI. Brain MRI is usually recommended in girls under 6 years of age and all boys with CPP to exclude pathological brain lesions, but specific criteria for performing brain imaging are still lacking (1). However, this patient is thought to be an exceptional case, although the underlying cause of early puberty is usually idiopathic. Therefore, even in patients with rapidly progressing early puberty, hormonal and imaging studies could be conducted.

The limitation of this report is that there was neither an in vitro nor functional study to support that this variant is pathogenic. Furthermore, the trio-test for family was not conducted to find denovo mutation in patients.

In conclusion, we present an extremely rare case of bilateral basal ganglia germinoma associated with the TREX1. Further studies are needed to identify the pathogenic genes of germinoma, including TREX1.