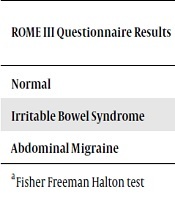 The aim of this study was to evaluate the effect of amyloid deposition in colon mucosa on the results of anorectal manometry test and the use of ROME III questionnaire in patients with Familial Mediterranean Fever (FMF).

The files of patients diagnosed with FMF were scanned to evaluate the patients at risk for amyloid deposition. Predisposing factors were identified. The patients were sampled using anorectal manometry test, Rome III questionnaire and the rectal mucosa suction biopsy and the test results were compared.

17 (63%) of the patients were female and 10 (37%) were male. The mean age was 12.15 ± 2.40 years. The number of patients with amyloid deposition in the rectal mucosa sample was 2 (7.4%). Both of these patients had regularly used colchicine. Amyloid deposition was found to be high in patients with M694V homozygous mutation (P = 0.05). According to the Rome III questionnaire, findings suggestive of irritable bowel syndrome were found in 5 patients and abdominal migraine was found in 3 patients. However, no statistical difference was found when the results of the Rome III questionnaire were compared with the results obtained from the anorectal manometry test (P > 0.05).

Amyloidosis can be seen due to various environmental factors, regardless of age, even when colchicine is regularly used. Anorectal manometry is an easy to perform test, helping diagnosis in this patient group. Although it has been shown that in patients with predisposing factors for amyloid deposition RAIR can be detected at lower pressures in anorectal manometry, the clinical significance of this finding is unclear. Since the Rome III questionnaire showed findings consistent with functional abdominal pain disease in one third of the patients, independent of the presence of FMF, it was found that the application of this questionnaire in patients with FMF could be misleading.

Familial Mediterranean Fever (FMF); is an autosomal recessive hereditary chronic disease characterized with fever and inflammation of the serous membranes (1). Amyloidosis, the most severe complication of FMF; is a group of diseases that are a consequence of abnormal protein deposits in various tissues. In FMF, amyloid deposits are mostly seen in kidneys. In addition, it can be seen in the gastrointestinal tract, liver, spleen and even heart (2). Amyloid deposition in the gastrointestinal tract symptoms include diarrhea, steatorrhea, constipation or pseudo-obstruction not responding to pro-motility agents.

Today, the diagnosis of amyloidosis is performed by renal and/or colon mucosal biopsy (3). Late diagnosis, delays in treatment after diagnosis, irregular use of colchicine and carrying MEFV gene mutation are known risk factors.

Anorectal manometry is the most commonly used technique to determine the functions and localizations of internal and external sphincters in the rectum (5, 6). There are many studies on anorectal manometry performed on adult patients in the literature, while studies on children are very limited and its reliability is low. There is no universal reference range for anorectal manometry test results in the pediatric age group. Furthermore, there are no adult or pediatric studies showing the possible effect of amyloidosis with gastrointestinal involvement on anorectal functions.

The purposes of the present study were to assess the probable effects of amyloid deposition in colonic mucosa on anorectal manometry testing, to detect the anorectal manometric differences in patients with potential risk factors for amyloidosis and to evaluate the use of the standard pediatric gastrointestinal functional assessment method, Rome III questionnaire in children with FMF.

The files of 1800 patients diagnosed with FMF according to Tell-Hashomer criteria and genetic mutation results who were treated and followed up in Pediatric Rheumatology Clinic were screened according to age, amount of proteinuria and FMF genetic analysis. This study was conducted in compliance with the 2008 Declaration of Helsinki and by the approval of Ethics Committee of Göztepe Training and Research Hospital, Medeniyet University (date/number: 28.Jan.2014/0015). Informed consent was obtained from the parents of patients included in the study.

The criteria for inclusion of patients in the study were; volunteering patients and the patient’s parents, minimum 8 years of age maximum 18 years of age, absence of anorectal malformation, absence of past anorectal surgical procedures, absence of mental retardation and inflammatory bowel disease.

Gastrointestinal complaints of the patients, comorbidities, age when the patient was diagnosed, medications used, presence of family relatives diagnosed with FMF, results of genetic tests for FMF, amount of proteinuria, colchicine use patterns were inquired.

After anorectal manometry test, rectal mucosa was biopsied using c-Erb2 (Aus systems, Australia) rectal suction biopsy kit. All tissue samples were examined by the same pathologist, who was blinded to patient characteristics. Congo Red and Crystal Violet staining were performed to detect amyloid deposition. Red staining around the vessel as seen in the light microscope with Congo Red, and double refraction of light with polarization filter in the positive stained areas were considered to be positive. The results were evaluated statistically compared to each other.

There was an additional disease in 4 (14,8%) of the cases. Additional diseases respectively; included allergic asthma, gastroesophageal reflux, glucose-6-phosphate dehydrogenase deficiency and essential hypertension.

The gastrointestinal system complaints of the patients were questioned. 11 patients (40.7%) had gastroenteritis and 6 patients (22.3%) had constipation. In 10 (37%) patients, there was no gastrointestinal complaints. According to the Rome III questionnaire, 19 (70.4%) patients were normal. Five (18.5%) patients had irritable bowel syndrome and 3 (11.1%) had abdominal migraine. No statistically significant difference was found between the results of the Rome III questionnaire by age, sex, presence of M694V homozygous mutation and proteinuria (P > 0.05) (Table 1).

According to the Rome III questionnaire, gastrointestinal system complaints were present in all cases with irritable bowel syndrome and abdominal migraine, which was significantly higher than those in the normal group (P < 0.05). There was no statistically significant difference between the rectal mucosa biopsy and Rome III questionnaire results (P > 0.05) (Table 2).

Table 2. Evaluation of Rectal Mucosa Biopsy Results According to the Rome III Questionnaire

No significant difference was found between the results of the Rome III questionnaire and rectal mucosa biopsy results and predisposing factors (P > 0.05).

FMF is an autosomal recessive hereditary chronic disease characterized with episodes of fever, serositis and abdominal pain which are seen in at least 80% of patients. Amyloidosis, the most severe complication of FMF, is a group of diseases that are a consequence of abnormal protein deposits in various tissues and these abnormal proteins, called amyloid fibrils, impair the function of tissues and organs (1, 8-10).

Kidneys are the most commonly involved organs in secondary amyloidosis cases. Increased amount of proteinuria is a risk factor for renal amyloidosis. In this study, albeit at varying levels proteinuria was present in all patients. Even though the number of patients enrolled in our study is insufficient for comparison, the amount of proteinuria at the severity of nephrotic syndrome should concern clinicians about amyloid deposition.

Comparison of anorectal manometry results of patients with respect to increased proteinuria levels revealed no significant difference due to proteinuria amount. However, it should be noted that there were only 2 patients with proteinuria at nephrotic syndrome severity in this study. As a matter of fact, amyloid deposition was shown in these two patients. Therefore, anorectal manometry tests to be performed in large patient cohorts with proteinuria at the severity of nephrotic syndrome are likely to produce significantly different results due to amyloid deposition.

The most up-to-date and only symptom-focused questionnaire used to evaluate gastrointestinal complaints in children is the Rome III questionnaire but there is no study on the standardization of abdominal pain and the prevalence of gastrointestinal disorders in FMF patients. In one study Rome III questionnaire was used to inquire abdominal pain in patients with FMF, irritable bowel syndrome was found to be 18% which has no statistically significant difference compared to the healthy control group (10.7%) (18). When the referred study is considered, it can be said that the prevalence of irritable bowel syndrome in patients with FMF is the same as that of healthy population. However, the inability to set statistical significance due to the limited number of patients in our study makes it difficult to draw a conclusion.

Amyloidosis can be seen due to various environmental factors, regardless of age, even when colchicine is regularly used. Amyloid deposits may affect bowel motility. Despite the presence of potential risk factors, the number of patients with amyloid deposition in the gastrointestinal tract was less than expected. This can be explained by the fact that the time from diagnosis to treatment in children is shorter compared to adults. Although it has been shown that RAIR can be detected at lower pressures in patients with predisposing factors for amyloid deposition, the clinical significant of this finding is unclear. Since the Rome III questionnaire showed findings consistent with functional abdominal pain disease in one third of the patients, independent of FMF, it was found that the application of this questionnaire in patients with FMF could be misleading.