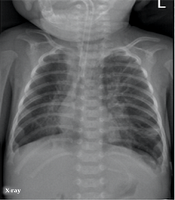 Bronchopulmonary dysplasia (BPD) is a common severe respiratory problem in premature infants, and imaging information has important reference value for its diagnosis. Recently, lung ultrasonography (LUS) has been successfully used for the diagnosis and differential diagnosis of neonatal lung diseases (NLDs), but the study of the diagnosis of BPD is still rare.

The purpose of this study was to investigate the ultrasonographic characteristics of BPD and its value for the diagnosis and differential diagnosis of premature infants’ BPD.

From January 2015 to December 2019, 25 premature infants diagnosed with early-stage BPD and 32 infants diagnosed with late-stage BPD according to their medical history, clinical manifestation, and chest X-ray were included in this study. The LUS examinations were performed on each infant. The LUS findings were recorded and compared with those of 40 premature infants without lung diseases.

Bronchopulmonary dysplasia (BPD) is known as a chronic lung disease (CLD), which is a common severe respiratory problem in premature infants, especially extremely premature infants. Besides, BPD seriously affects the survival rate of premature infants and their quality of life. For more than 50 years, medical staff has carried out many systemic studies on the physiological mechanism, prevention, and control measures, as well as lung development, damage, and repair mechanisms in premature infants. Although important progress has been made, the incidence rate of BPD has not significantly decreased. For example, in extremely premature infants with gestational age < 29 weeks, the incidence of BPD is still as high as 43%. These survivors also face a large risk of early death, and they need a tracheosto-my, long-term mechanical ventilation support, and even are at risk of lifelong respiratory system dis-ease (1). Early, timely, and effective means of detection and diagnosis can provide reliable reference indices for early prevention and diagnosis, which is of great significance for reducing the incidence, alleviating the severity, and improving the prognosis of BPD.

The diagnosis of BPD mainly depends on clinical manifestations, but pulmonary imaging exami-nation (including chest X-ray (CXR) and CT) has always played an important role in its diagnosis (2, 3). In recent years, the use of lung ultrasonography (LUS) to diagnose neonatal lung diseases (NLDs) has been widely accepted and recognized by clinicians and sonographers. Compared with traditional CXR, LUS has higher accuracy, reliability, and specificity in diagnosing NLDs (4-6); therefore, LUS has been widely carried out (7-9). Even in some well-developed neonatal intensive care units (NICUs), LUS has replaced CXR examination for routine use in the diagnosis of NLDs (4, 9). Re-search on the physiological mechanism of BPD has not shown consistent results, and the diagnostic criteria are not unified (10, 11). A few authors believe that LUS can predict the occurrence of BPD (11-13); however, research on the use of LUS to diagnose BPD has not been reported.

From January 2015 to December 2019, 25 early-stage BPD and 32 late-stage BPD patients were examined by LUS to preliminarily explore the feasibility of diagnosing BPD by ultrasound.

The institutional review board of Beijing Chaoyang District Maternal and Child Healthcare Hospital approved the study protocol (No. 2011-LC-Ped-01). Informed consent was obtained from their guardians who were involved in this study. This prospective study included 25 early-stage BPD and 32 late-stage BPD infants who were hospitalized in the NICU of the Bayi Children’s Hospital and Beijing Chaoyang District Maternal and Child Healthcare Hospital from January 2015 to December 2019. The clinical data were collected by different doctors, and the ultrasound operator was blinded to the clinical condition of the BPD infants. During the study period, 40 preterm infants without NLDs were randomly selected as controls.

The instruments used in this study were GE Voluson S10 or Philip EP5 ultrasound equipment, which is being used in our NICU. The frequency of the linear array probe was 10 to 18 MHz. All operators had been uniformly trained to be proficient in LUS.

The LUS examinations were performed by systematically trained neonatologists. In a quiet state, the infants were placed in the supine, lateral, or prone positions for the scan. Each lung was divided into three regions of anterior, lateral, and posterior by the anterior and posterior axillary lines. The probe was perpendicular to the ribs. Each region of both lungs was scanned carefully (15, 16).

Statistical Package for the Social Sciences (SPSS) 19.0 software was used to statistically analyze the data. Fisher’s exact test was used to compare the positive rates of the LUS test results of newborns from each group. These results were used to calculate the specificity and sensitivity of the main test results for the diagnosis of BPD. A value of P < 0.05 indicated statistically significant differences. The information reported was evaluated by an expert.

Briefly, normal neonatal lung imaging showed a ‘bamboo sign’ under B-mode ultrasonography (15-18). Pleural lines and A-lines were smooth, regular, and straight hyperechoic lines, parallel and equidistant from each other. A-lines gradually diminished and finally disappeared off the screen (Figure 1). 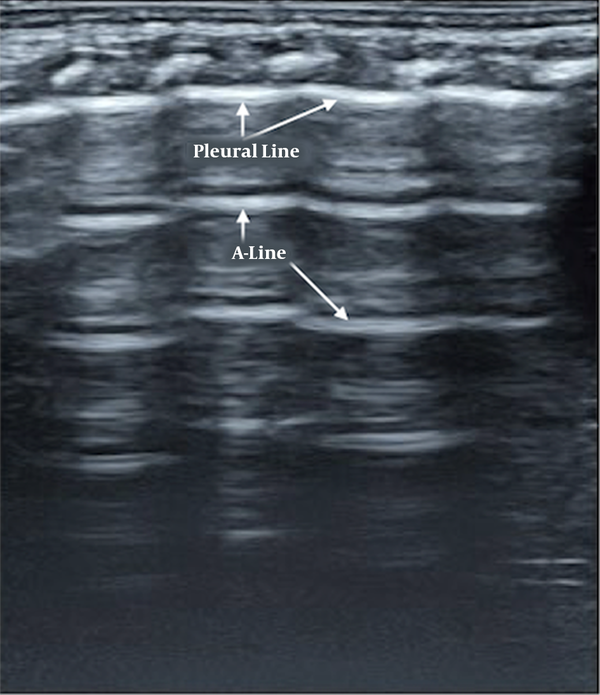 Normal lung ultrasound manifestation. Pleural lines and A-lines are smooth, regular, and straight hyperechoic lines, parallel and equidistant from each other. A-lines gradually diminish and finally disappear off the screen, which formed a manifestation of bamboo-like, named as “bamboo sign”. 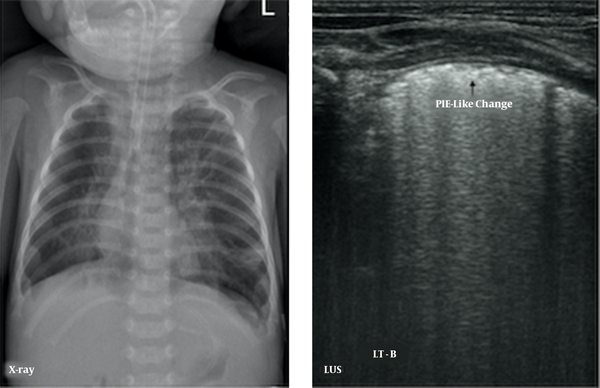 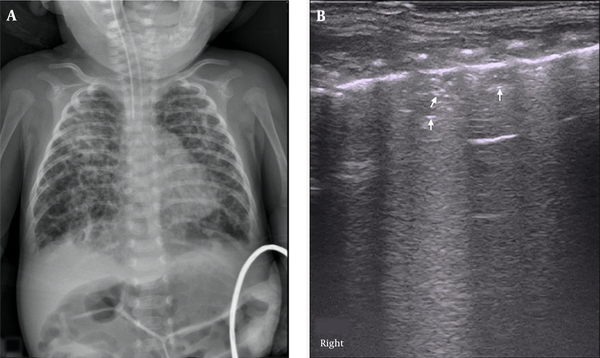 3.4. Sensitivity and Specificity of LUS in Diagnosing BPD

4.1. Long-term Oxygen Dependence in Premature Infants is not Equivalent to BPD

Previously, we conducted LUS examinations on 50 premature infants who had been oxygen-dependent for more than two months. The results showed that 36% of them had other kinds of lung diseases, including atelectasis, pneumonia, severe lung edema (possibly due to cardiac reasons, fluid replacement reasons, etc.), and lung edema with focal lung consolidation (29). When appropriate intervention measures were taken to resolve the above reasons, the oxygen dependence of some infants disappeared completely, and the degree of oxygen dependence in some infants was significantly reduced. Therefore, these infants would not be readily diagnosed as having BPD. Patients whose oxygen dependence disappears would not probably have BPD, and those whose oxygen dependence is mitigated may have different degrees of BPD; and although their initial need for oxygen may be due to lung inflammation, atelectasis, or serious diseases such as lung edema, the original X-ray may not find existing lung lesions. However, LUS is still not common, and there is no dynamic X-ray or further chest CT examination, thus making these patients receive long-term oxygen therapy, resulting in BPD or oxygen dependence. We refer to this type of BPD due to insufficient knowledge or improper clinical management as "iatrogenic BPD” (29). Besides, LUS can make a clearer early diagnosis of the cause of long-term oxygen dependence in preterm infants. Because atelectasis, pneumonia, or lung edema should not be the pathological changes of BPD itself, they may be BPD complications, comorbidities, or even the reasons for BPD. Therefore, if LUS examination reveals atelectasis, pneumonia, or other pathological changes of the lungs in long-term oxygen-dependent infants, the patient should not be quickly diagnosed as having BPD.

According to our preliminary observations and research results, there are no specific changes in ultra-sound imaging in early-stage BPD. When pathological changes such as significant pulmonary fibrosis and vascularization appear in late-stage BPD, when abnormalities such as pulmonary edema, thoracic dysplasia, atelectasis, pneumonia, heart diseases, and upper airway disease (such as softening of the trachea) are excluded, and when the following signs appear on ultrasound imaging, the possibility of BPD should be considered. The signs include: (1) AIS, which is the most common LUS manifestation of early- and late-stage BPD, but it is not an indicative sign because it can also be seen in many other lung diseases [17-28]. The cause may be related to pulmonary fibrosis or increased water content in the lung tissue; (2) nonspecific pleural line abnormality, including coarse or fuzzy is one common ultrasound finding in BPD patients; (3) specific pleural line abnormalities that are PIE-like changes, and one specific ultrasound sign of late-stage BPD; the sensitivity and specificity of PIE-like changes for the diagnosis of late-stage BPD were 62.5% and 92.0%, respectively (Figure 2). The reason for this finding may be related to pulmonary fibrous tissue and capillary proliferation and degeneration in-volving the pleura, causing damage; (4) AVS, which indicates that the lung tissue has vesicle formation and air exists within it (Figure 3). The AVS is an ultrasound imaging sign that occurs in late-stage BPD. It shows scattered higher echo reflections on the ultrasound image, which is often located in the AIS fields (it should be distinguished from air bronchograms, which are located in consolidated lung areas). The AVS may correspond to pulmonary vesicles or pulmonary cysts found on chest X-rays or CT scans in BPD patients. This needs to be further studied and verified. The AVS is another specific ultrasound sign of late-stage BPD and had a sensitivity and specificity of 53.1 and 100%, respectively. Generally, these findings are diffusely in all lung fields, but they are easy to be found at the back of the chest, which may be related to more severe lesions in the back. However, it is not easy to distinguish VAS from bronchograms for those who are inexperienced in the diagnosis of BPD by ultrasound. According to our study and knowledge, the VAS exists within the vesicle-forming lung field while air bronchograms exist within consolidated lung tissue. Therefore, whether there is consolidation is the key to distinguish them.

In conclusion, this paper is a preliminary study on the possibility of using ultrasound to diagnose BPD and its ultrasound imaging characteristics. The results showed that it is difficult to use LUS to diagnose early-stage BPD. Compared to the diagnosis of early-stage BPD, LUS has a higher value in the diagnosis of late-stage BPD when combined with obvious pulmonary fibrosis and pulmonary vesicle formation, which is mainly manifested by AIS, PIE-like changes, and AVS. Among these characteristics, AIS is the most common ultrasound manifestation of BPD, while PIE-like changes and AVS are specific to diagnose late-stage BPD.

Because the current understanding of BPD is not complete, diagnostic standards for BPD are not uniform. This paper presenting research on BPD diagnosis by ultrasound is also not sufficiently comprehensive. An in-depth understanding of BPD and the standardization of the diagnosis will facilitate further study of the value of ultrasound and ultrasound image characteristics for the diagnosis of BPD. Another limitation of this study is that we did not compare it with necrotizing pneumonia, which is also relatively rare in newborns. However, they should have different medical histories and clinical manifestations, and their differences in ultrasound images should be studied later.

Copyright © 2021, Author(s). This is an open-access article distributed under the terms of the Creative Commons Attribution-NonCommercial 4.0 International License (http://creativecommons.org/licenses/by-nc/4.0/) which permits copy and redistribute the material just in noncommercial usages, provided the original work is properly cited.
download pdf 8.05 MB Get Permission (article level) Import into EndNote Import into BibTex
Number of Comments: 0