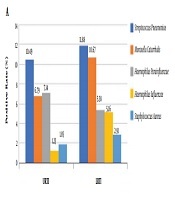 Respiratory tract infections (RTI) are common complications of primary nephrotic syndrome (PNS) and influence the outcomes of PNS. The pathogenic spectrum and their susceptibility to antibiotics in RTI change over time, which increases the difficulty of treatment.

To improve the curative effect of RTI in children with PNS, we conducted a cross-sectional retrospective study in 2740 children with PNS to study the etiologic features of RTI seen in PNS children.

Among 2162 cases of PNS with RTI, 2095 cases were CARTI (96.90%), and 67 cases were HARTI (3.10%). The most common pathogen in CARTI was Coxsackie virus, followed by Mycoplasma pneumoniae, respiratory syncytial virus, and Streptococcus pneumoniae, while the most common pathogen in HARTI also was Coxsackie virus, followed by respiratory syncytial virus, Mycoplasma pneumoniae, and Streptococcus pneumoniae. There was significant difference in the positive rates of Pseudomonas aeruginosa and Candida albicans between CARTI and HARTI. The distribution of pathogens differed between URTI and LRTI in children with PNS. The positive rates of most pathogens were lower in URTI than LRTI. Generally, the isolation rate of extended-spectrum β-lactamase (ESBL) producing bacteria was relatively low. In CARTI, the sensitive rates of Gram-negative ESBL producing bacteria to carbapenems, amoxicillin/clavulanate potassium, ampicillin/sulbactam, and ciprofloxacin were more than 90.00%, while Gram-positive ESBL producing bacteria were sensitive to glycopeptides, linezolid, macrodantin, mupirocin-HL, and amoxicillin/clavulanate potassium.

In children with PNS, the etiology differed between CARTI and HARTI as well as URTI and LRTI. Therefore, it is necessary to differentiate these features for empirical therapy. If the pathogen is bacterial, amoxicillin/clavulanate potassium could be the first choice before sputum culture results are available.

Primary nephrotic syndrome (PNS) is a disease characterized by the presence of nephrotic range proteinuria, clinical edema, hypoalbuminemia, and hyperlipidemia. It is one of the most common glomerular diseases in children, which accounts for 2 - 7 cases for every 100,000 children per year (1). Children with PNS have the secondary immunodeficiency showing the susceptibility to infection for their hypogammaglobulinemia and usage of glucocorticoid therapy. Respiratory tract infections (RTI) are common complications of PNS (2, 3). Infections not only reduce the efficacy of glucocorticoid treatment but also lead to prolonged duration and frequent recurrence in PNS (4, 5). The pathogenic spectrum and their susceptibility to antibiotics in RTI change over time, which increases the difficulty of anti-infection treatment. Therefore, prediction of the causative pathogens and their drug susceptibility before detecting results of respiratory pathogens in cases of PNS with RTI is needed to improve disease outcomes. There have been some researches on the etiology of RTI in China and abroad (6-8), but comprehensive studies on the etiology of RTI in children with PNS are scarce in the recent past.

To improve the curative effect of PNS complicated with RTI, the clinical data of 2740 children with PNS who were inpatients in our hospital from 1.1.2010 - 12.13.2014 were analysed retrospectively in this study.

2740 children diagnosed with PNS hospitalized in Children’s Hospital of Chongqing Medical University during 01.01.2010 - 12.31.2014 were enrolled in this study. Diagnosis of PNS referred to the 2012 KDIGO clinical practice guideline for glomerulonephritis (9).

NPAs were preserved in virus transport medium immediately after collection, and stored at -80°C prior to testing. Viral DNA and RNA were extracted from 200 mL of the NPA and eluted in 62 mL of AE Buffer by using QIAamp MinElute Virus Spin Kits (QIAGEN, Hilden, Germany). The complementary DNA sample was synthesized by using Super-Script First-Strand Synthesis system for reverse transcription polymerase chain reaction (RT-PCR) (Invitrogen, Camarillo, CA). All samples were screened by RT-PCR or PCR for common respiratory viruses using standard methods. Qualitative and semiquantitative cultures for bacteria were performed immediately using standard microbiological methods. Macroscopically distinct colonies of the samples were isolated in pure culture, and standard methods were used for identification, typing with sensitivity patterns.

Comparisons between different groups were performed using the chi-square test, and P ⟨ 0.05 was considered significant.

4.2. The Pathogen Distribution of CARTI and HARTI in Cases with PNS

In cases of PNS with CARTI, 579 cases underwent sputum culture, and 208 cases (35.92%) were positive. A total of 270 strains of bacteria were isolated, among which there were 163 (60.37%) Gram-negative strains and 107 (39.63%) Gram-positive strains. Viruses, atypical pathogens and fungi were detected in 254, 117, and 12 of the specimens, respectively. The most common pathogen was Coxsackie virus, followed by Mycoplasma pneumoniae, Respiratory syncytial virus, Streptococcus pneumoniae, and Moraxella catarrhalis (Table 1).

Table 1. The Strains and Positive Rates of Respiratory Pathogens in Cases of PNS with CARTI and HARTI

In cases of PNS with HARTI, there were 15 positive specimens in 29 specimens for bacterial culture, with a positive rate of 51.72%. 11 strains of Gram-negative bacteria (55.00%) and 9 strains of Gram-positive bacteria (45.00%) were isolated. Viruses, atypical pathogens and fungi were detected in 10, 4, and 2 of the specimens, respectively. The most common pathogen was Coxsackie virus, followed by Respiratory syncytial virus, Mycoplasma pneumoniae, Streptococcus pneumoniae, and Moraxella catarrhalis (Table 1).

4.3. The Pathogen Distribution of URTI and LRTI in Cases with PNS 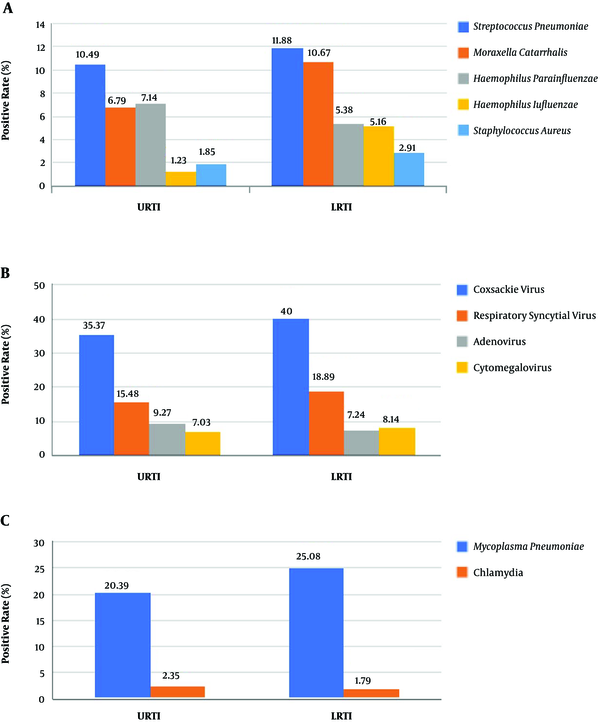 The distribution of the respiratory pathogens varied batween URTI and LRTI (Figure 1). The positive rate of Haemophilus influenzae was considerably lower in URTI than LRTI, which was significantly different (P = 0.031). The positive rates of other pathogens shown in Figure 1 differed between 2 groups, but the results weren’t statistically significant (P > 0.05).

4.4. Analysis of Antibiotic Resistance of Bacteria

In cases of PNS with CARTI, the sensitive rates of Gram-negative ESBL producing bacteria to carbapenems, gentamicin, levofloxacin, amoxicillin/clavulanate potassium, ampicillin/sulbactam, and ciprofloxacin were more than 90.00% (Table 3). Gram-positive ESBL producing bacteria were highly sensitive to glycopeptides, linezolid, quinolones, rifampicin, Macrodantin, mupirocin-HL, quinupristin/dalfopristin, and amoxicillin/clavulanate potassium with a sensitive rate more than 80.00% (Table 4). There was no statistical significance to analyse the antibiotic susceptibility and resistance of ESBL producing bacteria in HARTI because of the small sample size.

Owing to the substantial loss of protein in urine, the immunoglobulin of children with PNS stays at a very low level. Infection could occur in every system. RTI is one of the most common complications and has become a significant cause of relapse and death. In this study, the incidence rate of PNS complicated with RTI was 78.91%, which was higher than the incidence rate (72%) in Saudi Arabia reported by Alfakeekh et al. (1).

Our data showed that preschool and school-age children were likely to develop an RTI, while Wei et al. (2) reported that children under 10 were at a higher risk than children older than 10 in Taiwan. Different susceptible ages might vary in different times and regions. The main infection site of PNS complicated with RTI was the upper respiratory tract, which was similar to the findings reported in Japan (11). Therefore, we need to strengthen the management and screening of RTI in preschool and school-age children with PNS.

This study showed that the pathogen spectrum differed between cases of PNS with CARTI and with HARTI. The three most common bacteria in cases of PNS with CARTI were Streptococcus pneumoniae, Moraxella catarrhalis, and Haemophilus parainfluenzae. In the same period, the three most common bacteria in other cases of CARTI without PNS in local areas were Haemophilus parainfluenzae, Streptococcus pneumoniae and Moraxella catarrhalis (6), which was similar to our study. In addition, Streptococcus pneumoniae was the most common bacterium in cases of PNS with RTI in our centre, which was different from the main bacterium in hemodialysis patients reported by Gupta V (12), Staphylococcus aureus. This finding indicated that children with different kidney diseases developed RTI caused by different pathogens.

In this study, Candida albicans was the main fungus in cases of PNS with RTI, which was a similar result to that reported by Liu P (7).

According to this study, the distribution of bacteria differed between cases of URTI and LRTI in PNS with RTI. Therefore, we need to differentiate the location of RTI for empirical therapy in cases of PNS with RTI.

This study has some limitations. First, some common respiratory pathogens, such as human rhinovirus, human bocavirus, and human coronavirus, were not included in our study, which may lead to underestimation of the viral burden. Second, our findings can only be representative of children with PNS in local area, our findings may not be generalizable to other regions. Finally, we studied only hospitalized children, and a study of outpatients might have produced different results.

In conclusion, CARTI was more common than HARTI in cases of PNS with RTI, and URTI was more common than LRTI. Children of preschool and school age with PNS were more likely than younger or older children to develop an RTI. In children with PNS, the etiology differed between CARTI and HARTI as well as URTI and LRTI. Therefore, it is necessary to differentiate these features for empirical therapy. And we need to complete pathogen detection without delay. If the pathogen was bacterial, amoxicillin/clavulanate potassium could be the first choice before sputum culture results are available. We need to control infection as soon as possible to reduce the recurrence rate and improve the prognosis of children with PNS.