This study was conducted to assess the psychometric properties of the Persian version of the overall anxiety severity and impairment scale (OASIS), a measure designed to evaluate the severity and functional impairments associated with clinical and subsyndromal anxiety.

Using a descriptive-analytic framework, first, the OASIS was translated into Persian according to the forward-backward translation guidelines. Then, a total of 463 students of Guilan University of Medical Sciences in the academic year 2017 - 18 were selected using the convenience sampling method. Participants completed seven measures (i.e., OASIS, anxiety and stress subscales of depression anxiety stress scales-21, Beck anxiety inventory, openness subscale of NEO five-factor inventory, positive affect and negative affect scales, Connor-Davidson resilience scale, and state subscale of state-trait anxiety inventory), and the data were analyzed by SPSS V. 20.0 for windows and Lisrel V. 8.80.

Internal consistency reliability of the OASIS was acceptable (Cronbach’s α = 0.877). The exploratory factor analysis indicated that all items were loaded on a single factor (loadings = 0.799 - 0.849). The confirmatory factor analysis revealed that the single-factor model has resulted in an adequate model fit. The OASIS was positively correlated with the anxiety- and negative affect-related scales, whereas it was negatively correlated with the resilience- and positive affect-related scales. Correlations with the openness subscale were not significant.

In line with previous studies, the findings showed that the psychometric properties of the Persian version of the OASIS are acceptable. Therefore, it seems that the measure can be used in clinical practices and research studies in Iran.

Validated measures are often needed in a comprehensive assessment of anxiety (10). Multiple measures have been developed and validated for assessing anxiety during the last decades (10). Many of these measures assess the severity of anxiety based on the frequency of related symptoms, and enough attention is not paid to the functional impairments caused by anxiety. Simultaneously, it is important to monitor how anxiety affects the patient’s daily activities (11).

Insufficient attention to functional impairments caused by anxiety may decrease the utility of scales for measuring the global effects of treatment (12). Therefore, measures are needed to evaluate both severity and functional impairment. Meanwhile, measures should be short enough to be used in busy clinical settings. In recent decades, a number of well-known self-report measures of anxiety have been validated in Iran, including the Beck anxiety inventory (BAI) (13) and state-trait anxiety inventory (STAI) (14). Most of their items ask subjects about the presence of the symptoms and do not explore the functional impairments caused by anxiety-related symptoms. In addition to the above measures, other measures have also been validated that are related to functional impairment, such as the work and social adjustment scale (WSAS) (15) and Sheehan disability scale (SDS) (16). These measures exclusively ask subjects about functional impairment or disability and have no item about the frequency or severity of the experienced symptoms.

Recently, Norman and colleagues (11) have developed the overall anxiety severity and impairment scale (OASIS). The OASIS is a 5-item self-report scale designed to assess functional impairment caused by anxiety symptoms as well as their frequency and severity. Specifically, the OASIS was developed to meet the need for an anxiety measure that could (a) measure directly the clinical severity and functional impairment, (b) report transdiagnostically the severity of any anxiety disorder, and (c) be short enough (17). To date, this scale has been translated into Japanese (18), Spanish (19, 20), and Dutch (12), and its psychometric properties have been investigated in three studies on the college student populations (8, 11, 21) and in eight studies on the outpatient populations (8, 12, 17-20, 22, 23). These studies supported its one-factor structure and showed that it has robust reliability and validity. The applicability of this scale for various clinical and subclinical levels of anxiety and its specific emphasis on the functional impairment caused by anxiety symptoms distinguish it from the more conventional, longer anxiety measures (11, 12).

Considering the high prevalence of anxiety disorders in Iran (1), this research aims to evaluate the psychometric properties of the Persian version of the OASIS in a non-clinical population (students of university) in Iranian society.

This research aimed to evaluate the psychometric properties of the OASIS in an Iranian student population using a descriptive-analytic study framework. The statistical population included all students of Guilan University of Medical Sciences in the academic year 2017 - 18, and the research sample (n = 463) was selected using the consecutive, convenience sampling method. The students were included if they were interested in participating in the research, and were excluded if they had auditory and/or visual deficits resulting in poor participation. According to the ethical considerations, participation in the research was voluntary and subject to the informed consent, and necessary information was provided to the participants. Ethical approval was obtained from the Iran University of Medical Sciences Research Ethics Committee (ethical approval code: IR.IUMS.REC.1397.132). The order of the implementation of research instruments was random.

The OASIS is developed by Norman et al. (11) to specifically measure the severity and functional impairments caused by anxiety disorders and/or frequency and intensity of anxiety; interference with work, school, and social life; and impairment due to avoidance from situations, objects, and activities (11). This scale consists of 5 items, and each item contains 5 options, which are scored 0 to 4 and summed to obtain a total score. To date, this measure has been translated into Japanese (18), Spanish (19, 20), and Dutch (12), and its one-factor structure and robust reliability (internal consistency and test-retest reliability), and validity (convergent and divergent validity) have been demonstrated in three studies on the college student population (8, 11, 21) and in eight studies on the outpatient population (8, 12, 17-20, 22, 23).

Beck anxiety inventory (BAI) is one of the most widely used anxiety measures, which is investigated in many studies (30). In Iran, Kaviani and Mousavi (13) reported its validity as 0.72, test-retest reliability 0.83, and internal consistency 0.92 for BAI.

The NEO five-factor inventory (NEO-FFI) is used to assess the big five personality traits (neuroticism, extroversion, openness, agreeableness, and conscientiousness) based on the factor analysis approach (31). Neo-FFI’s reliability is excellent, and its convergent and discriminant validity has been confirmed (31). In Iran, acceptable psychometric properties have been reported on NEO-FFI (32).

This is a 25-item self-report measure on the ability to cope stress. Its psychometric properties have been supported in some studies in the United States (35) and Iran (36).

The state-trait anxiety inventory (STAI) consists of two 20-item measures of trait and state anxiety. The State subscale assesses how respondents feel at the present moment (37). The psychometric properties of this scale have been confirmed in Iran (14).

The psychometric properties of the OASIS were evaluated by assessing internal consistency and determining the face, construct, convergent, and discriminant validity. Analyses were performed using SPSS version 20.0 and Lisrel version 8.80.

Descriptive statistics for demographic characteristics, the total score of the OASIS, and the total score of other measures are presented in Table 1. For 463 students who participated in this study, the mean ± standard deviation (SD) of age was 22.82 ± 3.28. 69/8% of participants were female and most of them (89/3%) were single. The mean ± SD of the OASIS score was 4.83 ± 3.68.

Table 2. Factor Analysis, Cronbach’s Alpha if Item Omitted, and Correlation Between Items for the OASIS 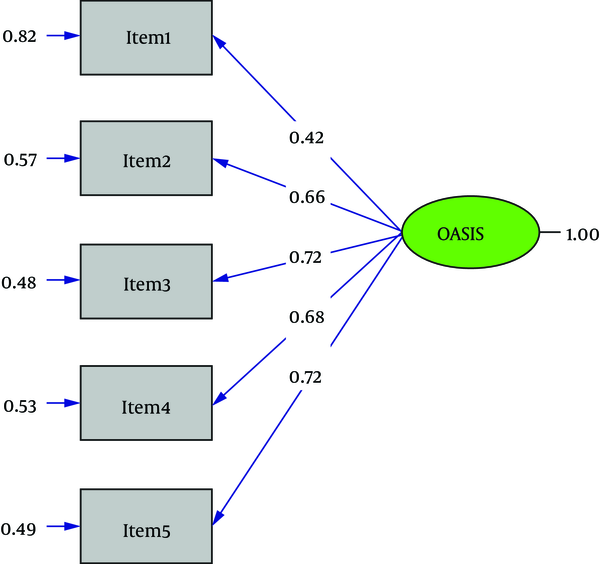 Based on the literature (8, 11, 12, 17, 19-21), the positive correlation of the Persian version of the OASIS with BAI, Anxiety and Stress subscales of DASS-21, State subscale of STAI and the Negative Affect subscale of PANAS was used to evaluate the convergent validity, and its negative correlation with Positive Affect subscale of PANAS, Openness subscale of NEO and Connor-Davidson resilience scale (CD-RISC) was used to determine the discriminant validity of the OASIS. Studies have shown that those with low levels of openness are often prone to chronic negative moods (42).

Table 3. Intercorrelations for Validity of the OASIS

Our results provided some support for the reliability of the OASIS. We obtained high Cronbach’s α (0.877) for the internal consistency reliability of the OASIS. This finding is in agreement with the results of the two previous research on university students. Also, this finding is very close to the findings of other studies conducted on clinical populations (8, 12, 22, 23). Regarding construct validity, in line with previous studies (8, 11, 12, 17-23) that had demonstrated the one-factor structure of the OASIS, the current study revealed its unidimensionality. Specifically, we reached the factor loadings of 0.799 - 0.849, which were very close to the loadings reported in previous studies. We found that a single-factor model gave the best fit for the data. The one-factor structure of the OASIS suggested using total score (computed by summing the five items) when it is to be used in clinical and/or research situations (17).

This research provided adequate support for the convergent validity of the OASIS. As we expected, it showed correlations with well-established measures of anxiety. Positive correlations of the OASIS with BAI, State subscale of STAI, and Anxiety and Stress subscales of DASS are frequently replicated in previous research (8, 11, 12, 17-23). Also, as repeatedly reported in the literature, the OASIS showed convergent validity in correlation with the negative affect subscale of PANAS, a construct that overlaps markedly with the anxiety (17).

On the other hand, discriminant validity was supported by the negative correlations of the OASIS with CD-RISC and positive affect subscale of PANAS, these findings are well-documented in previous research (17, 19, 20). Resilience, a core construct of the CD-RISC, often is referred to as the reverse construct of anxiety and general distress, and as it increases, the anxiety subsides (43). Besides, having positive emotions has often been reported as a strong protective characteristic against anxiety and depression (44). We expected that the OASIS will show a negative correlation with the openness subscale of NEO as with CD-RISC and positive affect subscale of PANAS, although it had only a non-significant association. This finding also was reported by Norman and colleagues (11). This finding suggests that although in some studies (44) openness is reported to be positively correlated with positive emotions, being prone to it is not necessarily associated with reduced anxiety. Altogether, these data demonstrated that the OASIS has adequate reliability, construct validity, and convergent and discriminant validity in a non-clinical population, and can be used for measuring the severity and impairments related to various levels of anxiety.

There were some limitations to this study. First, the age and educational range of the study sample were very limited, which may have limited the generalizability of the results to other people in the older age range or those with lower education. Second, only self-report measures were used for assessing convergent validity. Therefore, the results may be affected by the method effect. Third, the inclusion of non-clinical samples in this study may have limited the generalizability of the results to clinical groups. Future studies on the OASIS should be designed to include a wider age and educational range, using clinician-administered tools or behavioral assessments in addition to self-report measures, and including samples with clinical and/or subclinical levels of anxiety.