Overactive bladder (OAB) syndrome correlates with mental disorders, especially depressive disorders and anxiety disorders, and less frequently obsessive-compulsive symptoms, and occurs mostly in older people. Obsessive-compulsive disorder (OCD) is more frequent in OAB patients. Most OCD people are diagnosed at the age of about 19, typically with an earlier age of onset in boys than in girls, but the onset after age 35 does occur less frequently.

This study aimed to evaluate the relationship between OCD and OAB.

In this case-control study, 1,160 cases who were over 18 years old who were referred to the urodynamic clinic of Shohada-e-Tajrish center from June 2013 to February 2018 in Tehran, Iran, enrolled of whom 580 were considered the control group who were non-OAB patients, and 580 subjects were considered the case group who were OAB patients. The diagnosis of OAB was confirmed by a single urologist. All cases had detrusor overactivity (DO) in urodynamic study (UDS). The OAB-validated 8-questionnaire screen test (OAB-V8) was conducted, and the diagnosis of OCD was confirmed by a single psychiatrist according to DSM-5 criteria. Moreover, the Yale-Brown questionnaire was completed for each patient to rate the severity of OCD symptoms.

About the Yale-Brown Obsessive-compulsive Scale (Y-BOCS) total score, there is a significant difference between patients with obsessive traits and the control group (P < 0.001). OCD scores were significantly higher in the OAB group compared to the control group (P < 0.001). Logistic regression analysis showed that the population of the studied patients with OAB was more probable to have OCD than non-OAB control subjects in aged classified groups (OR: 6.23; P < 0.001).

The findings of this study showed that OAB patients reported higher obsessive-compulsive scores (Y-BOCS) compared to the controls. There is an independent correlation between OCD and OAB. However, the linkage between OCD and OAB justifies the need for more research.

Overactive bladder syndrome (OAB) is a condition in which the patient needs to urinate more frequently. This condition occurs along with frequency and nocturia, with or without urgency, or urge urinary incontinence (UUI) (1, 2). Various dimensions of a patient’s life are affected by its symptoms; therefore, this disorder is considered to be a large socioeconomic burden worldwide (3) that affects the quality of life and living costs (3). The prevalence of OAB has been measured in several regions, including Canada (12.8%), Europe (16.6%), the USA (16.9%), and Korea (12.2%) (4). The syndrome has a considerable effect on the patient's lives, which may result in an increased risk of falls, diminished quality of life, social isolation, sexual dysfunction, and depression (5, 6). There are many hypotheses for the etiology of OAB, including myogenic, peripheral autonomous, or neurogenic sources of detrusor hyperactivity as the prevalent consequences of urodynamic evaluation (7, 8). Although there are possible mechanistic etiologies such as benign prostate hyperplasia (BPH) in men and menopause, or pregnancy in women, its exact etiology is unknown yet (9-11).

Psychological causes of OAB have shown some conflicting findings in this field (12). Various investigations performed in patients with OAB and urinary incontinence have revealed that there is a significant relationship between depression and idiopathic UUI (13). Investigating psychiatric disorders and psychological features with OAB are beneficial for future investigation in detecting the mechanisms of OAB and its treatment (9). Hsiao et al. demonstrated that female patients with OAB suffer from psychological distress, neurotic disorders, and introversion more than normal female cases, and anti-muscarinic medications can help them to improve their psychological distress (9).

In another study in 2016, Ahn showed that female patients demonstrated more obsessive traits on the Korean version of the Maudsley Obsessional-compulsive Inventory total score (P = 0.006) and on the checking subscale (P = 0.001) (14). Obsessive-compulsive disorder (OCD) is characterized by intrusive, troubling thoughts (obsessions), and repetitive, ritualistic behaviors (compulsions), which are time-consuming, significantly impair functioning, and/or cause distress (15, 16).

The aim of this study was to evaluate the relationship between OCD and OAB in Iranian patients.

This study was a case-control study, which was conducted in a population over 18 years who were referred to the urodynamic clinic of Shohada-e-Tajrish center from June 2013 to February 2018 in Tehran, Iran. The diagnosis of OAB was confirmed for each patient by a single urologist with urodynamic study (UDS) and questionnaire. OAB is characterized as a “symptom syndrome”, marked by urgency, with/without urgency incontinence, and occasionally with frequency and nocturia. All cases had detrusor overactivity (DO) in UDS. The OAB-validated 8-questionnaire screen test (OAB-V8) was conducted too. The diagnosis of OCD was confirmed for each patient by a single psychiatrist according to DSM-5 criteria, and the Yale-Brown questionnaire (17) was completed for each patient to determine the severity of OCD symptoms.

The inclusion criteria for this study were patients ≥ 18 years old, confirmation of OAB by a urologist, OAB-V8 > 8, DO in UDS. The exclusion criteria for this study were urinary infection and history of psychiatric disorders (except OCD). Subjects suffered from multiple sclerosis (MS), a history of cerebrovascular accident, spinal cord stenosis, and a history of pelvic organ radiation, and participants with an incomplete questionnaire and reluctance to enroll in the study were excluded. The control group subjects were patients older than 18 years from the same community who were visited by the same urologist and did not have any symptoms of OAB in their evaluations during the period of the study. None of the control participants had to DO in UDS and urgency in their history. They were referred to UDS clinics for evaluation of true and stress incontinence or lower urinary tract symptoms. There were 580 participants in each group finally. The patient medical history was taken at the initial presentation. Afterward, physical examination, ultrasound imaging of the bladder and kidneys were performed to diagnose bladder stone, diverticula, and mass.

To evaluate the severity of obsessive-compulsive symptoms, we used the Persian version of the Y-BOCS. The severity was calculated by considering the higher sub-scale Y-BOCS scores, which is a standard and routine metric for researchers/clinicians. The Y-BOCS is a questionnaire, which assesses the presence and severity of obsessive-compulsive symptoms. It has two parts, including a symptom checklist and a severity scale. The symptom checklist includes 54 items that evaluate present and past obsessions and compulsions. The severity scale contains 10 items that show the effect of obsessions and compulsions. These 10 items are 5-point scales, including the time spent on compulsions (item 1), interference from obsessions (item 2), distress associated with obsessions (item 3), resistance to obsessions (item 4), patients control over obsessions (item 5), and the same items for compulsions (items 6 - 10) (17, 19). The maximum score for Y-BOCS is 40 and various therapeutic studies needed a twenty-score for coverage, which is related to cut-off points for Y-BOCS; 8 - 15 = Mild OCD; 16 - 23 = Moderate OCD; 24 - 31 = Severe OCD; 32 - 40 = Extreme OCD. The Persian validated Y-BOCS has shown good psychometric properties and sensitivity. The calculated optimal levels of internal consistency scores for the symptom checklist was 0.97, and for severity, the scale was 0.95. Split-half reliability for symptom checklist was 0.93, and for severity, the scale was 0.89, and test-retest reliability was 0.99 (17).

For this purpose, participants who reported obsessions or compulsions in the last 12 months before the interview were asked to report the number of weeks in which they experienced obsessions or compulsions more often in the last 12 months and the average number of hours/days involved with obsessions/compulsions. Numeric characteristics were compared in two groups by Student t-test if the distribution was normal or with nonparametric assays in cases of non-normal distribution. The chi-square (χ2) test used to detect the OAB-V8 score was related to the Y-BOCS score in two groups. The P-value of less than 0.05 was considered statistically significant. The association between the OAB and OCD variables was assessed by logistic regression analysis. We measured the odds ratios for the probability of OCD features in case of the existence of OAB. All statistical tests were performed with SPSS version 21 software. After describing the aim of the study and its process, all participants who agreed to enter the study signed the informed consent form. This study was approved by the Ethics Committee of Shahid Beheshti University of Medical Sciences with ethical code IR.SBMU.RETECH.REC.1399.863.

Table 1. Results of Basic Variables (Age, Occupation, and Education) in Patients with Over-active Bladder Symptoms and the Control Group a 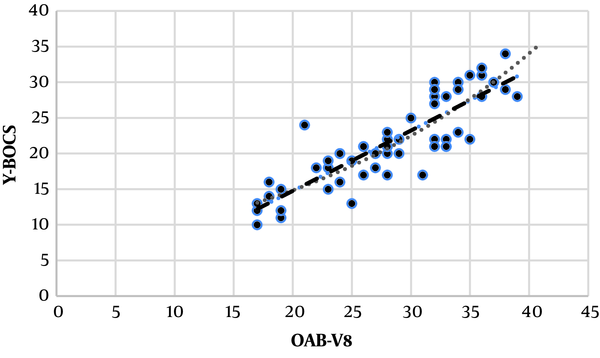 The correlation between over-active bladder (OAB) symptoms, based on OAB-V8 scale, and the severity of obsessive-compulsive disorder (OCD), based on Y-BOCS scale, in patients with OAB symptoms.

We revealed that the Y-BOCS score was higher in OAB patients compared with the control group, and OCD was 6.23 times more frequent in OAB patients (Figure 2). In line with our study, Hsiao et al. (9) used the Brief Psychiatric Rating Scale to assess interpersonal sensitivity, somatic, symptoms, obsessive-compulsive symptoms (OCS), depressive symptoms, anxiety, hostility, phobic anxiety, and paranoid traits and found that there are more somatic problems and OCS in females with OAB (9). Their results do not concern OCS and give a wide range of psychological disturbance in OAB patients. However, similar to us, Ahn et al. (14) showed that OCS features are the dominant view of the psychiatric characteristics of OAB patients. They showed that the Korean version of the Maudsley Obsessional-Compulsive Inventory (MOCI-K) scores were higher in the patient group, and female OAB subjects were more probable to gain obsessive-compulsive symptoms than the non-OAB control group. They also showed that in patients with OCD, the OAB-V8 scales were related closely to the MOCI-K scales (14). Similar to this study, we used a standard diagnostic means of OCD, i.e., Y-BOCS, which is an international scale for the severity of OCD and is specific for it. To get more generalizability of the findings, we selected a larger sample size compared to these studies. We diagnosed OAB with both clinical and screening questionnaires (OAB-V8). The diagnosis of OCD was confirmed for each patient by a single psychiatrist with DSM-5 criteria. 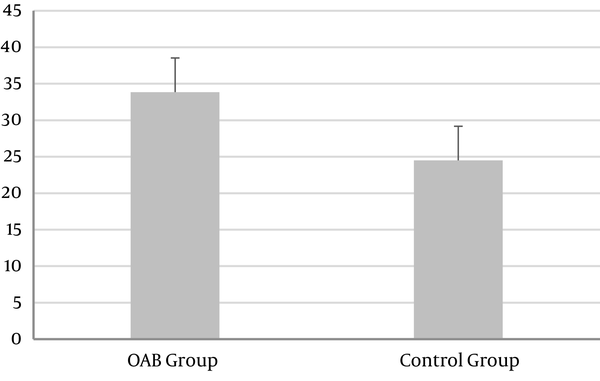 Comparison of the severity of obsessive-compulsive disorder based on Y-BOCS scale in two groups, patients with over-active bladder (OAB) symptoms and the control group.

There is an important question in this setting and field, either OCD is the cause of OAB, or there is a relationship or co-existence. There is little data in this field, and it is suspected that this linkage can be multifactorial. Our results and previous studies in OCD and OAB relationship (14) demonstrated that this link could be causally related because this linkage is solid with a high odds ratio compared with the control group. In mechanistic relevance, we can mention the serotonergic pathway that is involved in OCD patients, In this regard, there are neuro-imaging results that express lower 5-HT transporter accessibility in addition to higher 5-HTT availability. There is an incidental clue that the 5-HT2A receptor might be of a special contribution to OCD (23). A decline in serotonin levels in the central nervous system is related to urinary frequency and bladder contractions, while stimulation of the central serotonergic system with a 5-HT reuptake inhibitor reduces reflex bladder contractions and elevates the urine volume brink in animal studies (18, 24). Therefore, there might be a linkage between OAB or incontinency via the serotonergic cycle and OCD. Although the mechanisms are biologically reasonable, the proof is primary and is not in a clinical setting; thus, it is necessary to investigate the potential mechanisms.

Despite the well-designed study for lowering the limitations of previous studies, our study had some limitations: We did not collect the demographic and underlying possible risk factors like smoking or dietary, which may affect the results. Moreover, our study did not include men.

We showed that OAB patients reported higher scores in Y-BOCS compared to the controls. There is an independent correlation between OCD and OAB. However, the linkage between OCD and OAB justifies the need for more research. Conducting extensive studies in a cohort design is recommended to follow patients for possible causality pathways and performing mechanistic investigations like neuroimaging beside other standard questionnaires.

We are grateful to all individuals who participated in this project, especially Miss Hadizamani, the staff of the urodynamic test clinic.