High mobile-phone dependency may cause cognitive, emotional, and academic impairments among students; hence, proper therapies should be performed to prevent the risk.

The present study aimed to investigate the effectiveness of the nomophobia therapy package on self-esteem and nomophobia symptoms in high school students.

The research method was quasi-experimental with a pre-test, post-test, and follow-up design and a control group. The statistical population included all the students showing nomophobia symptoms who were in high schools in Isfahan in the academic year of 2018 - 2019. Using purposive sampling, we selected 30 students willing to participate in the project and randomly divided them into experimental (n = 15) and control (n = 15) groups. The research instrument included Nomophobia Questionnaire and Self-Esteem Questionnaire. The experimental group underwent eight sessions (75-minute sessions per week) of nomophobia therapy. The follow-up was performed after two months. Data were analyzed by descriptive and inferential statistics, such as mean, standard deviation, and repeated measures ANOVA. SPSS version 23.0 was further used to analyze the data.

According to research findings, nomophobia therapy was an efficient therapy for improving self-esteem and reducing nomophobia symptoms in students who suffer from the syndrome.

Cellphones are used not only to have communicated with others but also to meet other needs (1). However, unsafe and problematic use of mobile phones may lead to negative and dangerous implications for users (2, 3). When individuals are highly dependent on their phones, they may experience an increased rate of nomophobia or nomobophobia (4). Nomophobia is a fear caused by not having access to phone contacts (5). Accordingly, individuals who suffer from nomophobia may feel anxious when their phones run out of battery or miss their contacts (6, 7). Volkmer and Lermer (8), Hoffner and Lee (9), and Tran (10), in separate studies, concluded that individuals with high phone dependency feel severe anxiety when losing their cellphones. Moreover, the phenomenon of nomophobia causes numerous clinical symptoms such as depression, a sense of loneliness, social anxiety disorder, obsessive-compulsive disorder, and other psychological disorders (11, 12). Rodríguez-García et al. (5) reported that nomophobia negatively affects personality, self-esteem, anxiety, stress, academic performance, and other physical and mental health problems. We are therefore faced with a health problem, which negatively affects a person, causing psychological problems and physical and behavioral changes. Moreno-Guerrero et al. (13) showed that the highest rates of nomophobia were found in relation to the inability to communicate and contact others immediately.

Cellphone overuse leads to impaired psychological, cognitive, and emotional processes in individuals as well as their declined self-esteem (14, 15). Phillips et al. (16) found that individuals with high mobile dependency feel more anxious and have low self-esteem when losing their mobile phones. Furthermore, the relevant results argue that low self-esteem may also lead to problematic use of a mobile phone (17). Ayar et al. (18) showed that there is a direct correlation between nomophobia levels and the variables of problematic Internet use, social appearance anxiety, and social media use.

Self-esteem is defined as an individual's emotional or rational evaluation of relatively stable beliefs (positive or negative) about specific attributes of self, capabilities, and friendship with others. The need for self-esteem is one of the basic psychological needs and a component of the mental health of humans (19, 20). Self-esteem development is an important indicator of psychological adjustment, and having self-esteem is associated with many cognitive, emotional, and behavioral variables (21). People with high self-esteem become less anxious and depressed and have more social skills (22).

An effective intervention should be developed for nomophobia and other communicational problems of students because of the psychological, emotional, and academic impairments of students with nomophobia symptoms and cellphone overuse (11, 23-25). If proper treatments are used, it will be possible to avoid such disorders and vulnerability of students to emotional, academic, social, and behavioral problems (26). It worth noting that nomophobia-based interventions can effectively mitigate nomophobia symptoms and relevant issues.

The nomophobia therapy package was designed in this research to achieve the abovementioned goals. Accordingly, the underlying question of this study is whether a treatment package of nomophobia can affect the self-esteem and nomophobia symptoms in second-grade high school students who suffer from the syndrome.

The research method was quasi-experimental with a pre-test, post-test, and follow-up design and a control group. The statistical population included all the students showing nomophobia symptoms who were in high schools in Isfahan in the academic year of 2018 - 2019. One district was randomly selected from six educational districts of Isfahan, Iran. Ten high schools were selected from this district by stratified random sampling method, and the Nomophobia Questionnaires (NMP-Q) were distributed among ten girls' and boys' high schools. Then, questionnaires were collected and scored, and participants who obtained scores above 60 were identified. Using purposive sampling, we selected 30 students willing to participate in the project and divided them into experimental (n = 15) and control (n = 15) groups (Figure 1). The inclusion criteria were age range of 15 - 19, studying in high school, diagnosis of nomophobia, and full consent to participate in the research. 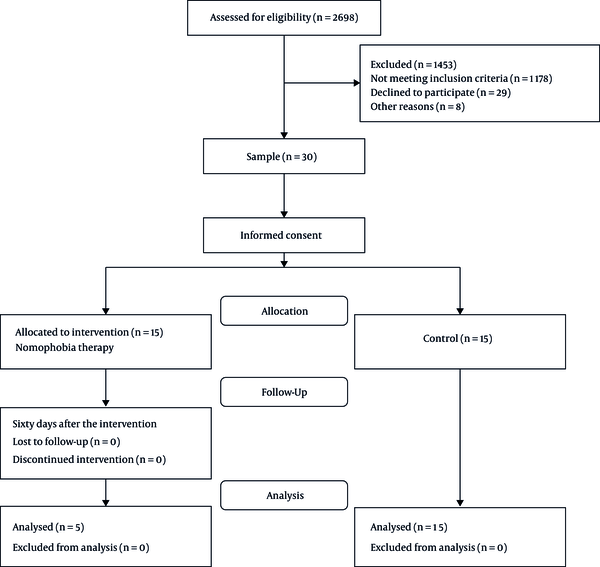 The permission was obtained from the Education Organization to attend schools and conduct the study. Students were informed about intervention steps to follow ethical considerations. Moreover, members of the control group were assured of receiving interventions at the end of the research process. Also, the confidentiality of both studied groups was guaranteed. Finally, the interventional nomophobia package was performed for experimental groups within eight 75-minute sessions (one session per week) over two months. After two months, a follow-up step was performed. The intervention program of the present study was performed in the Parto Aftab Psychology Specialized Counseling Center of Isfahan by the first author of the research. In terms of ethical considerations, the participants gave their informed consent in which information confidentiality was ensured.

The nomophobia therapy was organized as follows: After selecting students with nomophobia, they underwent in-depth interviews. Data were gathered until saturation, and 12 subjects were chosen at the end. The collected data were analyzed using interpretive phenomenology after data saturating. The captured information from each interview was reviewed and written on the paper. The written information was the source of raw data for content analysis. Data were analyzed based on van Manen’s phenomenology six steps. First, the essential theme that characterizes the phenomenon was determined using collaborative analysis and distinguishing main themes from secondary ones. The first author tried to keep a robust and informative relationship with the phenomenon by reviewing the main question of the study and adding other relevant questions to the interview. At the last step of hermeneutic phenomenology, different parts of the study were described coherently by considering the parts and the whole. Accordingly, the first author was alternatively reviewing the questions to find the phenomenology context by keeping the relationship between parts and whole. First, the initial coding was done, and then the content analysis of the final codes was obtained. Ultimately, the final notion was extracted, and the therapy was designed based on the final texts. Table 1 presents a summary of the treatment sessions program.

Nomophobia Questionnaire (NMP-Q) was developed in Persian by Azadmanesh et al. (4). This questionnaire encompassed 17 items scored based on the 6-point Likert Scale (1 = never, 6 = always). The score domain was ranged from 17 to 102. The higher the score, the higher the nomophobia. Reliability outputs showed Cronbach's alpha of 0.92 for the whole questionnaire; 0.87, 0.81, and 0.65 were calculated coefficients for subscales of anxiety, depression, and failure, respectively. According to the analytical results, factor load ranges of anxiety, depression, and failure were equal to (0.441 - 0.771), (0.765 - 0.693), and (0.814 - 0.529), respectively. Construct validity analysis was done based on the confirmatory factor analysis, and model fit indicators showed optimal values that confirmed the structure of three factors of NMP-Q (4). In the present study, the Cronbach's alpha was 0.77 for the questionnaire.

Data were analyzed by descriptive and inferential statistics, such as mean, standard deviation (SD), and repeated measures ANOVA. Cronbach's alpha was calculated to specify the reliability of the questionnaires. SPSS version 23.0 was further used to analyze the data.

Table 2. Demographic Variables of the Participants in the Experimental and Control Groups a

a Values are expressed as No. (%) unless otherwise expressed.

Table 3. Mean and Standard Deviation of Dependent Variable in Experimental and Control Groups in Pre-test, Post-test, and Follow-up a

a Values are expressed as mean ± SD unless otherwise expressed.

Table 4. The Effects of the Test Times, Groups, and Interaction Between the Groups
Table 5. Bonferroni Post-hoc Test for Paired Comparison of the Self-esteem and Nomophobia Symptoms Across Time Series in the Experimental Groups

The present study aimed to investigate the effectiveness of nomophobia therapy on self-esteem and nomophobia symptoms among high school students suffering from nomophobia. According to the first finding of this paper, a treatment package of nomophobia could improve self-esteem in high school students who suffer from nomophobia. This finding was in line with results obtained by Davoudi et al. (7), who found a significant difference between the effects of three cognitive-behavioral, emotion-focused, and mindfulness therapies on nomophobia symptoms and sleep quality of the control group and experimental group members. Moreover, Volkmer and Lermer (8) reported cellphone dependency and overuse as the reason for psychological harm like anxiety. In this case, individuals feel stress and restless when losing their phones (30).

Therefore, nomophobia syndrome causes a high emotional dependence on mobile phones in individuals who perceive the absence of the phone as a severe inner gap that affects their self-esteem (7). Hence, nomophobia therapy can prevent such a cycle by enhancing the self-esteem of students with nomophobia. By reducing the psychological and emotional attachment of students with nomophobia to their cellphones, this therapy eradicates the cognitive and behavioral attachment of students to their phones. In doing this, students will confront a cognitive challenge, will push their inefficient thoughts and attitudes away, and will accept that their self-esteem is not subject to an external device. Besides, the adverse effects of dysfunctional thoughts and cognitive errors of nomophobia on self-esteem were reminded within nomophobia therapy sessions for the student who suffered from the syndrome. Hence, students practiced assertiveness and self-expression by physical, emotional, and psychological distancing from mobile phones to be aware of their inner capabilities and values and to perceive higher self-esteem.

According to the second research finding, nomophobia therapy could alleviate nomophobia symptoms in high school students with the syndrome. In line with this finding, Atallah et al. (3) explained that the lack of access to the mobile phone in persons who are highly dependent on mobile leads to anxiety and impatience symptoms. Also, Gezgin et al. (11) studied individuals with high mobile phone dependency and found the effect of this disorder on cognitive, behavioral, and emotional functions leading to cellphone overuse.

Cellphone overuse may cause mobile addiction; hence, nomophobia therapy can effectively reduce the relevant symptoms in high school students who spent a long time on cellphone use. The use of mobile phones may interfere with some of the ordinary affairs of life as well as moods and modes of people (3). In general, those individuals who overuse the cellphone may forget about their important activities, isolate themselves from close friends and family members, deny the problematic use, and think of their cellphone when losing it. Many mobile phone addicts suffer from low self-esteem, have difficulty making social relationships, and tend to communicate and keep in touch with others (11). Hence, nomophobia therapy should teach students how to communicate with others without connecting to cyberspace. Furthermore, a cognitive challenge focused on technology as a reason for loneliness and isolation, especially during adolescence.

Since the statistical population of this study consisted of high school students with nomophobia in Isfahan, the generalization of the results to other student communities should be performed with caution. Also, the lack of inhibition of variables affecting self-esteem and symptoms of nomophobia were other limitations of the present study. The research should be conducted in different cultural and ethnic populations with larger samples to further investigate the effectiveness of the proposed results.