Due to low adherence to treatment and side effects of pharmacotherapy, using new brain stimulation, such as transcranial direct current stimulation (tDCS) in patients with anxiety disorders are available.

The present research was performed to evaluate the efficacy of tDCS and compare it with pharmacotherapy on reduction of worry, depression, and anxiety in a group of Iranian patients with generalized anxiety disorder (GAD).

This study was a quasi-experimental research. A total of 18 patients (46% females and 64% males) with GAD were randomly assigned either to tDCS, pharmacotherapy or sham conditions. Stimulation was delivered over the contralateral deltoid at 2 m/A during 20 minutes in 10 sessions of 4 weeks. Symptoms were assessed by a 7-item GAD scale, HARS, HDRS, and PSWQ in pre-test, post-test and follow up assessment (2 months later). Analysis of variance with repeated measure was used to analyze the data.

The tDCS is a promising treatment for generalized anxiety disorder, especially in depressive and worry symptoms.

Generalized anxiety disorder, as a chronic disease, is characterized by uncontrollable sense of worry about every aspect of life, physiological symptoms, such as sleep disturbances, muscle tension, irritability, and problem in concentration (1). Prevalence of this disorder has been reported as 4% to 6% (2, 3) in the general population and up to 10% in clinical treatment settings (4). Individuals with GAD have high functional impairment (5, 6) and low quality of life (7).

Both pharmacotherapy and psychotherapy exist for treatment of this disease, yet due to resistance to treatment, low adherence of therapy and adverse side effects, a few of these patients respond to pharmacotherapy (8). Therefore, noninvasive brain stimulation, such as transcranial direct current stimulation (tDCS) as a vigorous and convenient technique to moderate brain activity, is now available to treat many psychological disorders, such as obsessive-compulsive disorder (9-12), depression (13), and schizophrenia (14). Nevertheless, a few studies on the effectiveness of tDCS on reduction of symptoms of GAD are available. In one research conducted by Shiozawa (15), with positioning of the cathode on right dorsolatral prefrontal cortex RDLPFC and the anode on contralateral deltoid, anxiety symptoms were improved during a 15-day treatment course. The present research used anodal stimulation targeting contralateral deltoid and cathodal stimulation on F4 as done in previous research (15). The reason for the use of F4 in cathodal stimulation was its activation during functional neuroimaging (16).

The present research was performed to test the above hypotheses and respond to the question regarding Iranian samples. To do so, a single-blind, randomized clinical trial with sham condition was undertaken.

The present research was quasi experimental, single blind with pre-test, post-test, and follows up assessment (2 months later). A total of 18 patients with generalized anxiety disorder diagnosed by a psychiatrist, participated in this study and were paired according to their age, gender, education, severity, and duration of disease. They were randomly assigned to 2 experimental groups (one with tDCS and the other with pharmacotherapy) and one sham condition. In the tDCS group, subjects received anode electrode on the contralateral deltoid and cathode electrode on the right prefrontal cortex (F4). The mean age of subjects was 28.7 (SD = 9.6). Inclusion and exclusion criteria of the patients were as follows:

1- Diagnosis by a psychiatrist according to diagnostic and statistical manual of mental disorders- fifth edition (DSM-V).

6- Five points or higher in the 7-item GAD scale.

2- Current physical or psychological illness, such as schizophrenia, bipolar, and other anxiety disorders.

Subjects were randomly assigned to 3 groups of tDCS (6 subjects), pharmacotherapy (6 subjects), and sham condition (6 subjects). This study was carried out according to the the declaration of Hesinki-Ethical principles for Medical research involving human subjects. Written consents were obtained from all participants. It is important to note that sham condition received tDCS treatment after follow up assessment.

Hamilton anxiety rating scale (HARS) is a 14-item scale that covers 13 symptoms of anxiety developed by Hamilton (17). Each item was rated on a 4-point scale (0 = not present to 4 = severe). The score range was 0 to 56. Those who scored 5 or less were considered as having no anxiety. Other categories were as follows: 6 to 14 = mild anxiety; 15 to 28 = moderate anxiety; 29 to 42 = severe anxiety, and 43 to 56 = very severe anxiety. In Iran, HARS was validated by Kavyani, Mossavi and Mohit (18), and was reported to have high reliability and validity.

Hamilton depression rating scale (HDRS) is a 17-item assessment of depression over the past week developed by Hamilton (19). The cut-off points for different levels of depression were as follows: 0 to 6 = not depressed; 7 to 17 = mildly depressed; 18 to 24 = moderately depressed; and 25 to 64 = severely depressed (20). Carnerio, Fernandes, and Moreno, reported adequate reliability (a = 0.83) and validity for this scale (21). In Iran, Mokhber, Azar Pajooh, and Asgharipour (22) reported the reliability of this scale via correlation with BDI as 0.90 and high validity.

Penn state worry questionnaire (PSWQ) is a 16-item scale, which was used to measure individual differences in worry. All items were rated on a 5-point Likert type scale from 1 (not at all typical of me) to 5 (very typical of me). High internal consistency and test-retest reliability were reported (23, 24). Cronbach’s alpha for this scale in the present study was 0.90. In Iran, Cronbach’s alpha and test-retest reliability was respectively 0.88 and 0.79. Also, the correlation coefficient with trait anxiety and depression was 0.68 and 0.43, which indicated high reliability and validity (25).

All data were analyzed using the SPSS software version 22. Analysis of variance with repeated measures were used to examine the effectiveness of pharmacotherapy and tDCS on the research variables (worry, anxiety and depression) and also Scheffe follow up test was used to compare the level of effectiveness of these 2 methods.

Descriptive statistics of worry, depression, and anxiety scores in 3 stages of treatment was analyzed using mean and standard deviations that are summarized in Figure 1 and Table 1. Inferential results using Analysis of Variance (ANOVA) with repeated measure are shown in Table 2.

Table 1. Summary of Descriptive Statistics of Three Measures of Variables in Pre-Post, Post-Test, and Follow Up
Table 2. The Result of Analysis of Variance with Repeated Measure of Three Measurements of Study Variables

In order to analyze the hypotheses of the research, analysis of variance with repeated measures was used. Before analyzing the data, Kolmogorov-Smirnov for examining the normality of data distribution, Leven test for homogeneity of variance, and M-box Matrix variance-covariance were used. In each analysis, the results of Kolmogorov-Smirnov test showed that the P value was more than 0.05. In Leven’s test, the hypothesis of equality of variances was met. Finally, the M-box test showed that homogeneity of variance and covariance was fulfilled. The results of worry, depression, and anxiety scores in treatment and sham conditions are shown in Table 2. 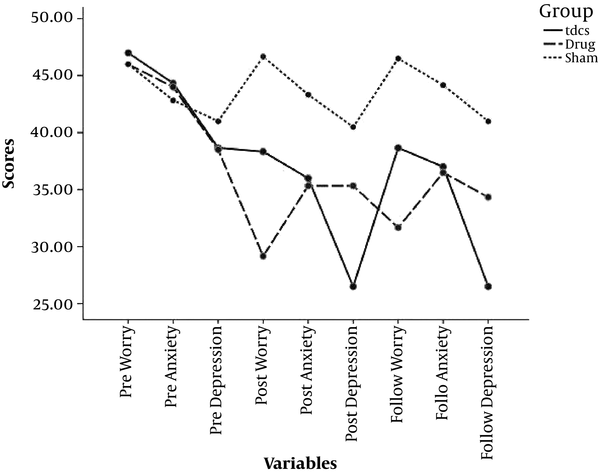 Figure 1. Comparison Between Effectiveness of Pharmacotherapy, tDCS and Sham Condition Therapy on Treatment of Worry, Depression, and Anxiety in Generalized Anxiety Disorder

According to the present research, tDCS was an effective and efficient treatment for patients with generalized anxiety disorders. There were significant improvements in worry (PSWQ), anxiety (HARS), and depression (HDRS) in the experimental groups when compared with the sham condition. Another result of the current research showed that the effectiveness of pharmacotherapy in reducing worry and tDCS in reducing depression was significant. However, in the anxiety variable, there were no significant differences between the 2 treatments. In summary, the results of the present research showed that both tDCS and pharmacotherapy were effective in treatment of anxiety, depression, and worry compared to the sham condition. Also, the comparison of these 2 treatments showed that the effectiveness of tDCS on depression and pharmacotherapy on worry was more and had equal effect on treatment of anxiety, and there were not significant differences. The current results were consistent with previous researches that showed the effectiveness of tDCS on worry (15), anxiety (25), and depression (26). Brennan, McLoughlin, O’Connell, Bogue, O’Connor, and McHugh (27) showed that tDCS was effective in treatment of depressive symptoms. The studies of Kar and Sarkar (28) showed that the use of brain electrical stimulation was effective in treatment of anxiety. Recent researches with the aim of changing the prefrontal cortex and making an equilibrium between activity of left and right prefrontal cortex, have shown the significant effect of brain direct current stimulation on reduction of symptoms of depression disorder (29).

In conclusion, the results of the present research showed that tDCS by using anode electrode on contralateral deltoid and cathode electrode on F4, to decrease worry, anxiety and depression symptoms, in GAD patient is a safe, convenient, and an a inexpensive method. Also, a few studies have been done to investigate the impact of brain stimulation on GAD patients; this study might be practical for therapists to combine their therapies with non-invasive brain stimulation in order to increase beneficial effects of tDCS.

This study was sponsored by the Medical University of Ardabil.

Copyright © 2018, Iranian Journal of Psychiatry and Behavioral Sciences. This is an open-access article distributed under the terms of the Creative Commons Attribution-NonCommercial 4.0 International License (http://creativecommons.org/licenses/by-nc/4.0/) which permits copy and redistribute the material just in noncommercial usages, provided the original work is properly cited
COMMENTS