Forms of Self-immolation in Iran: A Systematic Review and Meta-analysis

Self-immolation is one of the most violent methods of suicide and is considered a psychosocial problem.

The purpose of this study was to investigate the forms of self-immolation in Iran using a systematic review and meta-analysis method.

In this study, seven papers published from 1999 to January 2020 were selected using keywords such as self-immolation and Iran in SID, Google Scholar, PubMed, Web of Science (ISI), Scopus, and Elsevier databases.

Study selection was done by two independent researchers. The results of studies were pooled using the Freeman-Tukey Double Arcsine Transformation method. The heterogeneity among studies was checked using the Q-test and I2 index.

To reduce self-immolation, easy access to oil must be restricted in families, and high-risk people should have access to psychology consultation.

Suicide methods are different in countries based on culture, symbols, and religion. Complete suicide, or successful suicide, means the act of killing oneself and ending one’s life successfully (1). Suicide is one of the social and psychological problems with a rising trend (2). Suicide is more common in the age group of 15 to 44 years and is the fourth leading cause of death and the sixth cause of disability in the world (3). In Iran, approximately 11 people per day and more than 4,000 people each year die due to suicide (4). One of the heinous methods of suicide is self-immolation that is very painful for the victim and the witness (5). Physical and psychological complications after self-immolation are heavy with a lot of costs (6).

In general, attempted suicide by self-immolation is more prevalent in our country than in other western countries (7). Self-immolation leads to personal, family, and social disability and is a social pathology (8). Self-immolation may have an infectious pattern and may continue unconsciously and slowly among people in society and pass from one generation to another (9). The most important and effective way to reduce the complications and mortality of self-immolation is its prevention. Preventive measures at the community level have five stages: Identification and evaluation of the problem, identification of risk factors and protective factors, selecting and testing an intervention at a limited level, extensive intervention, and evaluation of the effect of the intervention. As the most credible epidemiologic studies have been conducted in Western societies and self-immolation is a rare suicide attempt in the West, the examination of Iranian populations that have different social characteristics is necessary (10). The identification is likely to be an important step toward prevention and control. By identifying social, individual, and gender patterns of self-immolation, an effective step can be taken to identify people at risk and minimize the incidence of self-immolation (11, 12) by interventions.

This study aimed to determine the frequency of self-immolation means and the mean rate among women and men by a meta-analysis.

We registered the research proposal at Ilam University of Medical Sciences. The research protocol did not register on the PROSPERO website.

Studies’ eligibility criteria in the review were as follows:

3) Method of self-immolation being cited in the article

Electronic databases including Google, Google Scholar, Scientific Information Database (SID), Web of Sciences, PubMed, Scopus, and Elsevier were searched for published articles in the Persian and English languages from 1999 to January 2020. Keywords used for the search were self-immolation, self-burning, self-inflicted burn, suicide by burning, suicidal burns, and self-incineration that were limited to affiliations from Iran (3).

The search strategy in PubMed was as follows:

Study selection and data extraction were done by two independent researchers (KS and HT). According to the search strategy, 123 studies were included in the primary checklist. Of them, 70 articles were selected. However, 53 selected articles were checked again for the secondary outcomes of interest, including sample size, time of data collection, and risk factors of self-immolation in Iran. Finally, 20 articles met the inclusion criteria, and their full texts were assessed. Studies that assessed solely self-immolation and risk factors were excluded from the list.

A data extraction template was used to provide a primary checklist of the included studies. This checklist included the authors’ name, title, year, location of study, sample size, population, gender, cases, risk factors, geographical region, the average percentage of self-immolation in males and females, age category, and demographic variables of self-immolation. The final checklist was generated by selecting studies that met the criteria for the present meta-analysis.

We preferred to use the binomial distribution with the Freeman-Tukey Double Arcsine Transformation method. An overall prevalence was calculated as a weighted average of the individual studies. The heterogeneity among studies was checked using the Q-test and I2 index. Data analysis was done with STATA ver. 11.1.

Ethical issues (including plagiarism, informed consent, misconduct, data fabrication and/or falsification, double publication and/or submission, redundancy, etc.) have been completely observed by the authors. This study was approved by the Ethics Committee of Ilam University of Medical Sciences (code: IR.MEDILAM.REC.1397.178). The authors declare that there is no conflict of interest.

The search done in electronic databases yielded the identification of 123 articles. Of them, 70 articles were deleted because of duplication. Then, the titles and abstracts of 53 articles were reviewed, and 25 articles were deleted because they were not related to our study. After reading the full texts of the articles, finally, 20 articles met the inclusion criteria for the meta-analysis (Figure 1). The eligible studies (n = 20) determined the frequency of used self-burning means and the mean self-immolation rate in Iran from 1999 to January 2020, with a total sample size of 9,470 (473 subjects per article). The characteristics of the included articles are found in Table 1. 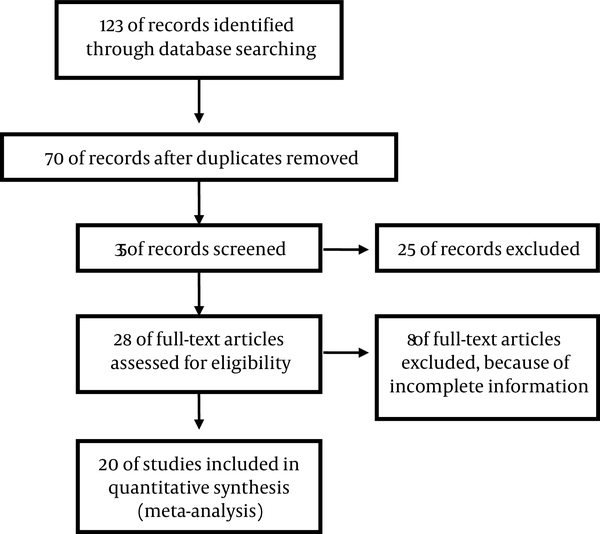 Flowchart of the systematic review and meta-analysis process

The level of heterogeneity in this study was 99.6%, indicating that there was high heterogeneity among the studies (35, 36). Table 2 shows the mean percentage of self-immolation by sub-groups. Figure 2 shows that the mortality rate in people who committed self-immolation was 64% (CI: 0.56 - 0.73, I2 = 94.8%, P < 0.001.). figure 3 shows Meta-regression in study by years and sample size. Self-immolation showed an increasing trend from 1999 to 2017 (Figure 3). The publication bias in the obtained results is indicated in Figure 4. There was no bias in the results, as the funnel plot was symmetric. The sizes of the circles reflect the weight of studies (larger circles denote larger sample sizes and vice versa). 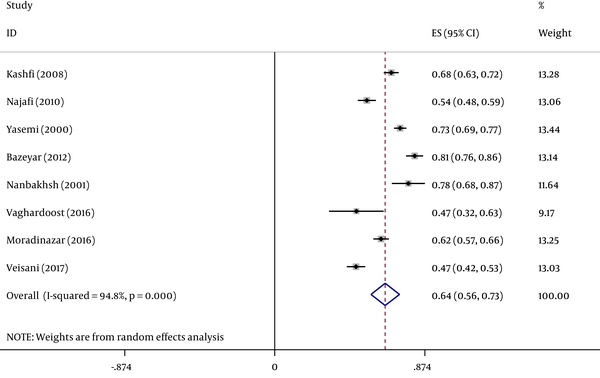 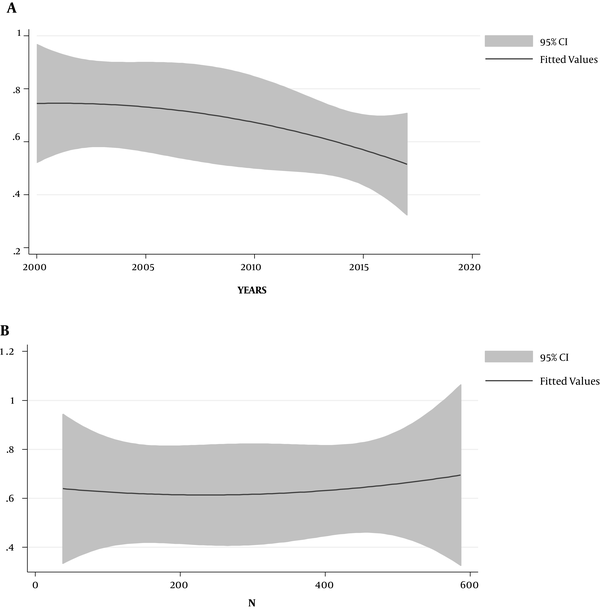 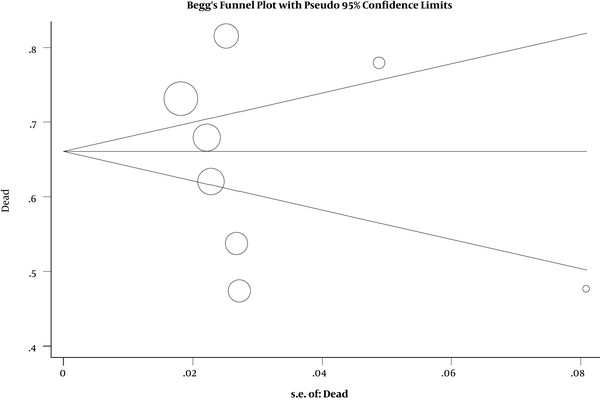 Publication bias in self-immolation: There is no bias in the results due to the symmetrical funnel plot. The sizes of the circles reflect the weight of studies (larger circles denote larger sample sizes and vice versa).

The occurrence of self-immolation in adolescents and young people may be due to the crisis of puberty and problems associated with this period, as well as the lack of knowledge and awareness of problem-solving methods or escaping from the difficulty of life, along with the lack of preparedness to deal with factors such as failure, frustration, and poverty (18).

According to the results of this study, the number of self-immolations was higher in girls than in boys, which is similar to the results of other studies (26, 31-33). Female self-immolation can be attributed to different physiological from men, as well as sensitivity to psychological, social, and economic pressures. Perhaps, ignoring or neglecting the individual and social rights of women in some societies, especially rural communities, because of their dominant culture can cause depression and psychological problems.

Informing women of advocacy centers, appropriate counseling, and information to them, and pay attention to. The importance of mental health as an essential element of primary health care in rural and urban health centers can be effective in reducing cases of self-immolation. Also, training ways to cope with stress, problems, and failures can be effective in reducing self-immolation (18, 26, 37, 38). Another cause may be rape that makes them decide to end their lives to prevent defamation. These can be significantly reduced with proper education during school time and increasing knowledge and attitudes.

According to the results of this study, most people used oil for self-immolation that is consistent with the results of other studies (32-34, 39). This is because of the ease of availability, affordability, and simplicity. Besides, more self-immolations occurred in winter that is consistent with other studies (23, 40). Considering that the necessary equipment for heating such as oil and gas is more available in winter than in other seasons, it is likely that self-immolation is higher, with the readiness of the device and individual’s motivation. However, further research is needed.

The results showed that about 64% of people died after self-immolation, which is consistent with other studies (21, 22). Also, in a meta-analysis study, the incidence of self-immolation was estimated at 1.53 per 100,000 population (41). The results showed that according to the geographical area, self-immolation occurs more in the west of the country and in the provinces of Ilam and Kermanshah. In this regard, the culture of people and life in rural communities may play a significant role (42). According to the results of the present study, with an increase in the year, the rate of self-immolation has been decreasing, but there are still cases of self-immolation. It seems that the level of awareness of people about this method of suicide has increased and led to a decrease in this rate in the past two decades. However, it is suggested that more training programs be developed to reduce self-immolation to a much greater extent, and over time, this type of suicide reaches its lowest point in society.

According to the results of this study, more studies have been carried out in the west of Iran, and no self-immolation study has been conducted in the south of the country, which is one of the limitations of this study. The rate of completed self-immolation was higher in women than in men, which is consistent with previous studies (18-22). The reasons for this may include the following: The lack of employment, high family dependence, weakness of women’s gender towards men, lack of ability and adaptability to future problems, sensitivity, and gender-specific vulnerability to men.

According to the results of research, oil has been the most means for self-immolation, which is consistent with other studies (23-25). Suicides occurred more in spring and winter, which is consistent with the results of various studies (22, 23, 29). Among the reasons is that in the winter, the necessary equipment is more available, and self-immolation is done quicker.

There are several limitations in the selected studies for this meta-analysis, including non-random sample selection, a limited number of variables existing in the studies, and focusing on the cause, risk factors, and clinical symptoms of self-immolation without reporting its prevalence. In addition, there was no clear distinction between self-immolation type and cost in some studies. We were not able to assess all risk factors of self-immolation in the quintet geographical area of Iran (north, south, west, east, and center) due to the absence of conducted studies in all areas.

To reduce self-immolation, the best way is to prevent it and educate people at puberty. It is suggested that people at risk be identified and the consequences of self-immolation become clear to them.