This study aimed to assess the child and adolescent mental health status in the Kermanshah Province of Iran.

A representative randomized sample of 993 urban and rural children aged 6 to 18 (349 aged 6 - 9 years, 333 aged 10 - 14 years, and 311 aged 15 - 18 years) participated in a cross-sectional study to be screened for psychiatric disorders using the Persian version of K-SADS-PL. In addition, a demographic questionnaire was completed by the participant's parents.

Compared to other pediatric diseases, the psychiatric disorder's prevalence is pretty high among the youths of Kermanshah Province. Therefore, child and adolescent mental health should be a priority for the youth healthcare system in Kermanshah.

In Iran, like other developing countries, such disseminated studies have been done in different cities, but the provided data cannot be generalized to the entire country. For example, one study on a randomized sample of 2,000 children and adolescents of the urban population of Tehran suggested a higher rate of psychiatric disorders than in other countries (7). However, this need can be met by an epidemiological study with a larger randomized sample from rural and urban areas of Iran.

With about two million people, Kermanshah Province is located in the west end of Iran. Although, according to the 2016 census, about 22% of this population is made up of children and adolescents, most investigators have studied psychiatric disorders over time and in clinical or school settings. For instance, one randomized study on 475 urban students from 17 primary and secondary schools of Kermanshah suggested that 57.5% of 7-15-year-old students had experienced at least a lifetime traumatic event, and on average, 30% of them had a variety of externalizing and internalizing problems (8). Therefore, considering the global prevalence of child psychiatric disorders and insufficient awareness of people regarding psychiatric disorders among children and adolescents, it may be possible that most child psychiatric disorders are not recognized or underestimated in Kermanshah. On the other hand, compared to other Iranian cities, socioeconomic status in Kermanshah has been under the adverse effects of many risk factors, like the vicinity to the Iraq War, lower level of literacy, higher incidence of addiction, and unemployment. As known, social, cultural, economic, and political changes of societies could affect people's psychological health. Besides, 38% of Iranian adults need clinical psychology services (9), and most psychiatric disorders root in childhood. Thus, we need to recognize the psychological problems of children by studies using large randomized samples and proper methodologies.

This study aimed to assess the child and adolescent mental health status in the Kermanshah Province of Iran.

This is a community-based cross-sectional survey conducted as part of a national study of the epidemiology of psychiatric disorders in Iranian children and adolescents (IRCAP) (10). Data were collected under the supervision of two faculty members (HA and NJG) by nine instructed postgraduate male and female psychologists. After obtaining consent, examiners gathered the data in the screening and diagnostic phase, in which a random sample of children and their parent(s) or the primary care taker completed the demographic checklists and participated in semi-structured interviews for K-SADS-PL. For this purpose, the interviewers referred to the participants’ homes and held the semi-structured interviews for 30 - 40 min.

3.2. Criteria for Selecting the Participants

In this study, 993 urban and rural children and adolescents aged 6 - 18 years in Kermanshah City and its outskirts were selected by multistage cluster sampling method. For this purpose, 170 blocks were randomly selected according to postal codes, and then six cases were selected from each cluster head, with three cases from each gender in different age groups (6 - 9 years, 10 - 14 years, and 15 - 18 years). Inclusion criteria were living in Kermanshah City and its outskirts and being in the age range of 6 to 18 years. The exclusion criteria included the lack of willingness to participate and not being at home at visits (parent or child). Also, children and adolescents with severe physical illnesses were excluded.

Kiddie-SADS-Present and Lifetime version (K-SADS-PL): This is a semi-structured psychiatric interview based on the DSM-IV criteria. It contains five diagnostic groups: (1) Affective disorders including depression disorders (major depression and dysthymia), mania, and hypomania, (2) psychotic disorders, (3) anxiety disorders including social phobia, agoraphobia, specific phobia, obsessive-compulsive disorder, separation anxiety disorder, generalized anxiety disorder, panic disorder, and posttraumatic stress disorder, (4) disruptive behavioral disorders including ADHD, conduct disorder, and oppositional defiant disorder, and (5) substance abuse, tic disorders, eating disorders, and elimination disorders (enuresis/encopresis). The interview started with questions about demographics. Moreover, information about present complaints and prior psychiatric problems was also obtained (10). Ghanizadeh reported the reliability of the Persian version of the questionnaire to be 0.81 and the inter-rater reliability to be 0.69 using the test-retest method. The sensitivity and specificity of the Persian version were found to be high (11). In a study by Polanczyk et al., the kappa coefficients were 0.93 (P < 0.001) for affective disorders, 0.9 (P < 0.001) for anxiety disorders, and 0.94 (P < 0.001) for ADHD and disruptive behavior disorders. The present study assessed the interrater agreement for K-SADS (12).

Sociodemographic form: It was designed by the study principal investigators consisting of questions such as sex, age, residence place, parental history of hospitalization, education, vocation, etc.

Informed consent was obtained from children and adolescents. For participants younger than 15 years, the informed consent form was completed by their parents, and for participants aged 15 to 18 years, it was done by parents or the adolescents themselves. The information about children and adolescents and their families was kept confidential. If children or adolescents were diagnosed with a psychiatric disorder, the child and adolescent psychiatrist, who collaborated on the IRCAP project, were ready to treat them free of charge. The project was approved by the Ethics Committee of the National Institute for the Development of Medical Research, NIMAD (IR.NIMAD.REC.1395.001).

Table 1. Frequency of Demographic Variables in Children and Adolescents (6-18) and Prevalence of Psychiatric Disorders Based on These Variables (N = 993) 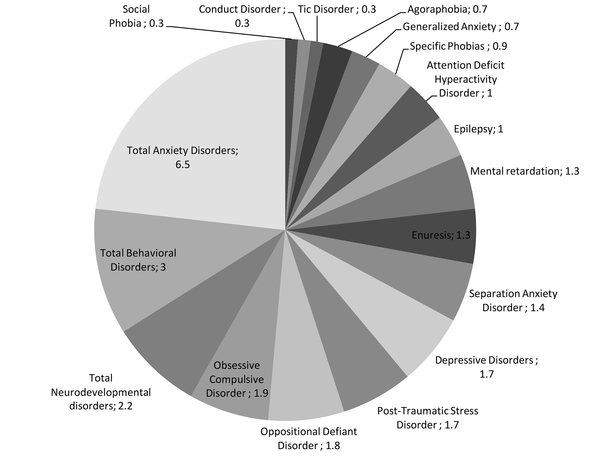 Several children and family characteristics were examined to explore the relationship between them and the prevalence of psychiatric disorders. The results have suggested a non-significantly higher prevalence of psychiatric disorders among children whose mothers or fathers were unemployed or had a job in the private sector (considering their low payment and inconstant job) or had a lower educational level. It might suggest the effect of socioeconomic status on psychiatric disorders among children. This result is in line with other studies showing that parents' lower education and financial condition are critical family risk factors for poorer mental health in children (4). On the other hand, although in Kermanshah, mothers of participants suffering from mental disorders were primarily housewives, this result is inconsistent with Mohammadi et al. at the national level across Iran (IRCAP), who found that mothers' job could not predict depression disorder among children (15). Besides, the non-significant relationship of some participants’ demographic characteristics with disorders including female gender, age of 10 - 14, and urban residence is consistent with Mohammadi et al. (15), indicating that these characteristics could be the predictors of depression among children. It is also in line with the meta-analysis of La Maison et al. that indicated a higher frequency of psychiatric disorders among adolescents (3).

The psychopathological rate of psychiatric disorders was comparable with other similar investigations worldwide, as the most prevalent psychiatric disorder was anxiety disorders, followed by behavioral, neurodevelopmental, and depressive disorders (1). The most common anxiety diagnosis in this sample was obsessive-compulsive disorder, and the least prevalent one was a social phobia.

The most common comorbidity pattern was a mood disorder with anxiety disorder, behavioral and neurodevelopmental disorders, in sequence, comparable with prior research that assessed psychiatric disorders in early adolescents in Brazil (3). Interestingly, it can be said that anxiety and depression are related to behavioral disorders as the chief complaints of disordered children. Likewise, Ranoyen et al. found that anxiety and depression are the most common comorbid disorders (16).

The strengths of this study were recruiting a population-based sample and conducting face-to-face interviews with a large randomized sample of urban and rural children and adolescents. Using a validated diagnostic instrument of semi-structured interview (K-SADS-PL) in Iran applied by trained MA psychologists was another advantage that made the data more generalizable. Another essential point was interviewing parents or guardians and children or adolescents simultaneously, making the data more reliable. Some limitations may have influenced the interpretation of the results. Although participants were all in school-age and getting reports from teachers could definitely reveal significant symptoms not recognized by mothers, they were not involved in gathering stages. Long interviews that mainly were done with low educated mothers included another limitation. The K-SADS-PL instrument was based on DSM-IV, so we could not employ the criteria of DSM-V, which has the most internationally accepted criteria.

This study indicated that about 11.5% of 6-18-year-old children and adolescents in Kermanshah suffer from a kind of mental health disorder. In addition to mental health care, a combination of health and social services should be available for young people, resulting in protection against known risk factors such as low socioeconomic status of families and prevention from hospitalization (17). Yet, as pediatric psychiatric disorders have not gotten appropriate attention from health politicians and by considering social, mental, and physical needs of the youth experiencing mental distress, easily accessible mental health and evidence-based psychological services are strongly recommended to deal with this critical present and future problem.