Self-Immolation among Women in Iran: A Narrative Review

Self-immolation is defined as ending life by suicide, particularly through burning, which carries considerable morbidity and mortality. Although its prevalence is low in developed countries, in developing countries, it’s an important problem.

We systematically searched studies published in international and local databases on self-immolation in Iran (either in English or Persian) to identify relevant studies from the time of inception of databases to June 2017. Here, we presented the data regarding the prevalence and factors associated with self-immolation among Iranian women.

Sixteen studies were included in this review. In Iran, according to the reports of the forensic organization on deaths by suicide, from 2006 to 2010, 16.4% of the committed suicide were via self-immolation. It is more common in females than males, particularly among young, married, and low educated women. Self-immolation is more common in the north and west of Iran. The most prevalent causes of self-immolation are reported as domestic violence and other stressful events such as family conflicts, intimate relationship break-ups, divorce, and financial difficulties.

Suicide is a major public health concern worldwide, which causes severe health consequences and adversities for survivors. Annually nearly 800000 people die due to suicide worldwide. Most cases of suicide are associated with psychiatric disorders so that over 90% of cases of suicide commitment are attributed to mental health disorders. Also, 51% of them have a history of major depressive disorder (1-3). Self-immolation is defined as ending life by suicide, particularly through burning. Furthermore, in some countries, it has political reasons. Survivors of self-immolation experience significant scars and a prolonged and painful recovery, both physically and psychologically. Moreover, it imposes considerable costs to both families and the healthcare system (4, 5). As injuries and burns caused by self-immolation are deeper and more extensive than those occurring in accidents, it carries high morbidity and mortality. Therefore, self-immolation should be distinguished, in its clinical and psychosocial aspects, from other types of self-harm.

Various factors contribute to self-immolation, depending on the cultural and socio-demographic characteristics, psychiatric disorders, and experienced adverse life events (6, 7). In most of the low- to middle-income countries, young women and teenage girls are at increased risk of self-immolation, while in high-income countries, it’s more common among older men (5, 8, 9). In Iran, self-immolation is a common method of suicide among women, with significant differences among various regions of the country (mostly in the north and west of the country). Most cases of self-immolation among Iranian women are attributed to psychosocial problems.

This is a narrative review of available literature, both in English and Persian, on self-immolation in Iran. First, a list of keywords and terms related to self-immolation, suicide, self-burn, and deliberate self-harm was developed. We systematically searched the US National Library of Medicine (PubMed), the online abstracts and citations database of Elsevier’s SciVerse (Scopus), Psychinfo, and ISI Web of Science to identify relevant studies from the time of inception of these databases to June 17th, 2017. Also, Iranian databases of Iran Medex, scientific information database (SID), and the national magazines’ database (Magiran) were searched to find Persian studies using the Persian equivalents of the above-mentioned keywords. According to each database specifications, a sensitive search of the literature was performed using combinations of different terms and subject headings related to the population (Iran), indices (prevalence, epidemiology, incidence), and outcomes (self-immolation, self-burn, deliberate self-burning, women).

2.2. Summarizing, Extracting, and Reporting the Data

All cross-sectional, longitudinal, cohort, case-control, descriptive, and review studies, either in English or Persian, were included. Two reviewers independently reviewed the titles and abstracts of potentially relevant studies for eligibility criteria. Afterward, the same two reviewers independently applied the inclusion/exclusion criteria for articles that were selected for full-text review. Then data were extracted by the two reviewers working alone and then cross-checked.

Thirty studies were included in this review (Tables 1 and 2). The study selection process is depicted in Figure 1. 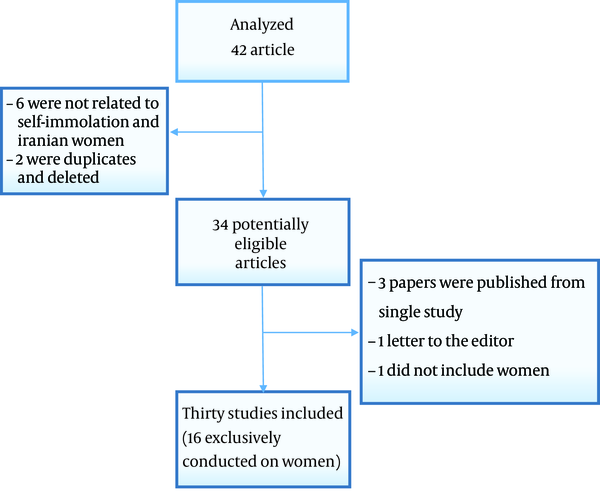 Flow diagram of the study selection

Similar to the global pattern, self-immolation is significantly higher among females, particularly young women (8, 10, 20, 34, 36). Chronic marital conflict is reported as an important risk factor for self-immolation. Therefore, couples are at an increased risk of suicide attempts by self-immolation (P < 0.001) (18).

Since self-immolation is associated with high morbidity and mortality, it imposes a significant burden, particularly years of life lost (YLL) (10, 14, 18, 28). There are considerable differences concerning the suicide attempts and suicidal behaviors among males and females.

This study showed that, generally, women are more likely to commit suicide via self-immolation. Several factors are reported as risk factors for self-immolation, the most important of which are domestic violence and stressful events such as family conflicts. Most of the self-immolation victims had a history of psychiatric disorders, were less educated, and were married. Studies performed in various regions of Iran have reported different rates for self-immolation. These studies reported higher rates in the western and northern parts of Iran and border provinces. Self-immolation is a significant social and medical problem all around the world. Suicide by self-immolation is more frequent in developing (40.3% of all suicides) than the developed countries (0.06% - 1% of all suicides). It comprises 0.37% to 40% of total burn center admissions worldwide, and, in Iran, it ranges from 4.1% to 36.6% (5, 18).

The mean age of self-immolation victims in Iran is relatively low compared to the western countries (12). Studies have shown that the mean age of self-immolators in the world is one decade older than the corresponding age in Iran (44, 45). Several factors contribute to this issue, including arranged marriage and children’s wedding (8, 10, 18, 41, 46-49). A review study performed in Iran has reported that in border provinces, which have higher rates of self-immolation than other regions of the country, family size (5.2 versus 4.1; P < 0.05) and age at first marriage are significantly different than the national averages (P < 0.05) (14).

The results of studies on suicidal patterns about gender differences are controversial. In the present study, self-immolation was more common among females. In contrast to Iran, studies conducted in Australia and North America have shown that men committed self-immolation more than women (50, 51). This difference might be due to the fact that self-immolation is considered as a method of crying for help by women in some regions of Iran (21).

Previous studies conducted in Iran and other developing countries have reported an inverse association between self-immolation and level of education (18). Also, those with lower levels of education tend to use more violent methods for suicide, which can be attributed to poor problem-solving skills (8). Moreover, a low level of education is usually associated with lower socio-economic status (11).

There are studies that mentioned socio-economic status as an important factor that contributes to self-immolation in less developed countries, which is in line with findings of the present study, that most of the female self-immolators were from low socio-economic classes. Deprivation, poverty, and humiliation in Uzbekistan, problems related to marriage and trousseau in India, and arranged marriage in Afghanistan have been reported as the main causes of attempting self-immolation by young women (52-54).

In Iran, self-immolation is more a cultural issue rather than a religious (8). Similar to other studies, Iranian studies have also reported that there are cultural factors that increase the risk of self-immolation, including imitative acts by women who imitate self-immolation threats from their peers and sisters (8, 18). Both socio-cultural and psychiatric factors have been found to be associated with self-immolation (10). Easy access to inflammable materials may have an important role in committing suicide by self-immolation; Kerosene is the most commonly used tool (85%) for self-immolation (12).

Domestic violence is reported to be associated with self-immolation. Family conflicts, intimate relationship break-ups, divorce, and financial issues might also have a similar role (14, 34). Arranged marriage, unwanted pregnancy, being financially dependent on the husband, unfair divorce laws, unemployment, and limited job opportunities for women may bring social hopelessness in women. In this context, suicidal behaviors may be an automatic reflection, particularly in the first years of married life for women (5, 9, 24). Similar cultural factors might contribute to self-immolation in different provinces of Iran. The results of studies conducted in East Azerbaijan (41), Mazandaran (10), Kohgiluyeh-and-Boyer-Ahmad (48), Kurdistan (36), Ilam (6, 19), Kermanshah (18), Tehran (55, 56), Khuzestan (57), Lorestan (33), and Sistan-and-Baluchestan (24) suggest that tension with husband and his family has a crucial role in women’s deciding to commit self-immolation. Economic opportunities are often lower in border provinces of Iran, and, therefore, their unemployment rate is higher than the national average. Moreover, people of these provinces are usually more illiterate, suffer from higher rates of psychological distress, and have limited access to health facilities. Furthermore, in these regions, divorce is associated with a high stigma, and women feel uncertain about their future. Overall, studies have shown that almost all border areas of Iran suffer from a high prevalence of self-immolation, compared to central regions of the country. Future studies are needed to elaborate on this phenomenon and understand its underlying mechanism. Self-immolation in Iran particularly affects young married women living in rural areas (8, 41, 47, 48, 58), and 73% of self-immolation cases occur in families with physical or verbal aggression (24).

The findings of the present revealed that although mental disorders may contribute to deciding to commit suicide, but social and cultural issues seem to better predict self-immolation. This finding is somehow inconsistent with studies conducted in western countries, in which major depressive disorder, psychosis, alcoholism, and drug use disorders were strongly associated with suicide (59-63).

In many countries, self-immolation is a type of radical political protest. For example, during the “Arab Spring” in recent years (64). Our review revealed no association between a particular political challenge and self-immolation in Iran. The present study had limitations. First of all, due to the limitation of data, we couldn’t perform a meta-analysis. Also, there were differences between the included studies concerning the sampling method, data collection instruments, and methods applied to assess the outcomes. We limited the data collection process to studies performed on women in Iran.

This study demonstrated that the prevalence of self-immolation is relatively high among Iranian women, compared to other countries. Although studies have reported different rates for self-immolation in various regions of the country, it can be argued that this harsh method of suicide roots in similar cultural and socio-economic factors. While the current study highlighted the specific and contextual factors associated with self-immolation, future studies benefiting from high-quality methodology are necessary to increase understanding of this phenomenon and perhaps to develop prevention measures.