No standard self-report instrument for withdrawal symptoms is available in Iran.

This study aimed to evaluate the psychometric properties of the Persian version of the 10-item Amphetamine Withdrawal questionnaire version 2 (AWQV2).

A sample of 388 methamphetamine addicts (215 females and 173 males) referred to addiction recovery centers and psychiatric ward of Farabi Hospital in Kermanshah. A two-stage random sampling method was used. The reliability and internal consistency of the AWQV2 items were examined using Cronbach’s alpha and test-retest reliability, respectively, and the instrument validity of the AWQV2 was measured using construct validity and convergent validity.

The AWQV2 had a Cronbach’s alpha of 0.72. Factor analysis using the main component analysis with a varimax rotation introduced three factors of hyperarousal, anxiety, and reversed vegetative symptoms. These factors explained 0.58 of the total variance. The coefficient of test-retest reliability at a 2-week interval was equal to 0.77. The convergent validity of the AWQV2 was examined by simultaneously administering the Advanced Warning of Relapse (AWARE) questionnaire to 40 subjects, with a correlation coefficient of 0.81.

Based on the results, the AWQV2 has very good psychometric properties and may be used in research and therapeutic interventions.

Addiction to methamphetamine is now deemed a major worldwide concern (1), an estimated annual global prevalence of 0.4% (2). Iran has a high rate of methamphetamine users insofar as it accounts for 5.2% of the total rate of substance users (3). The long-term use of methamphetamine psychological disorders, in addition to performance-related problems (4), imposes considerable costs on families and societies (5).

Users of methamphetamine, who use it only once, and individuals with underlying mental disorders expedite the incidence of psychosis by 50% to 70% (6) and quitting the patients with methamphetamine dependence that require hospitalization (7).

Such methamphetamine-related physical, psychological, behavioral, and social problems call for wide-scope research, and it should be noted that the absence of a valid and reliable tool precludes attempts at diagnosing and treating methamphetamine withdrawal symptoms. The Amphetamine Withdrawal questionnaire is one of the latest tools developed and used in methamphetamine rehabilitation centers (17, 18). Therefore, considering the research and clinical needs as well as the different structure of this questionnaire in different cultures, it was important to investigate the psychometric properties of AWQV2 in Iranian society.

Sampling was conducted in two stages. First, five addiction recovery centers were randomly selected using the table of random numbers. Then, from patients with methamphetamine dependence, those who were willing to take part were selected by convenient sampling.

Ethical considerations included respect for the patient, confidentiality of the patient’s data, coordination with the physicians and authorities of the center, and controlling psychotic symptoms. Each participant was verbally provided with information regarding the study and the contents of the information sheet. All the participants signed a consent form in which the study procedures were explained.

We obtained the permission of the author (Dr. Manit Srisurapanont) by email for the translation of the questionnaire into Persian and its subsequent localization. The original version was first translated into Persian. It was then translated into English by two experts in Persian. Then, the original and translated versions were compared, and the translation errors were corrected by two translators. To ensure the equivalence and meaningfulness of both English versions, back-translation with the original version was performed (22). In the final stage, the questionnaire was pre-tested on 20 subjects to identify possible ambiguities in the semantic understanding of the questionnaire.

Then, the validity of the content of the questionnaire was done by interviewing experts in this field.

In the qualitative evaluation of the content validity of grammar compliance, the use of appropriate words emphasized the importance of items in their place, and the questionnaire was presented to 10 experts to determine face validity, and then the difficulty level, the amount of inadequacy, the ambiguity of the expressions, or the failure of the word meanings were corrected, and their comments were applied as minor changes to the questionnaire (23).

It should be explained that this questionnaire is in the form of a research project approved by Kermanshah University of Medical Sciences under the number (grant number: 96414).

The study was approved by the Vice-chancellor of Research and Technology and the Ethics Committee of Kermanshah University of Medical Sciences, Kermanshah, Iran, on July 29, 2017 (registration no.: KUMS REC.1396.360).

Developed by McGregor et al. (18), the Amphetamine Withdrawal questionnaire version 2 (AWQV2) consists of 10 items scored on a 5-point Likert scale ranging from 0 to 4 (“not at all”, “very little”, “a little”, “quite a lot”, and “very much”). The total score ranges from 0 to 40. This questionnaire comprises three factors of hyperarousal, anxiety, and reversed vegetative symptoms and has an internal consistency (Cronbach’s alpha) of 0.90 and a validity (r) of 0.55 (17, 18).

The AWQV2 is to be completed by the patient 24 hours after quitting (17, 24). In the present study, the questionnaire was completed three to seven days after methamphetamine withdrawal symptoms.

This questionnaire was developed in 1882 by Miller et al. and comprises 28 items (14). The questionnaire is scored on a 7-point Likert scale (never = score 1 to always = score 7). The psychometric properties of this desirable instrument and its reliability have been reported 0.90 (15, 16).

Internal consistency and Cronbach’s alpha were utilized to assess the reliability of the data based on a 1-time administration of the questionnaire. The results revealed a Cronbach’s alpha of 0.72. Below, a more detailed examination of the descriptive properties of the research instrument is provided.

The mean and scale variance were reported after removing each item (Table 1). Based on the corrected Pearson’s correlation coefficient, the correlation between each score and the total score was high, showing the acceptability of the items. It was also observed that the reliability was decreased or changed minimally by the removal of each item. Moreover, the results of the Kolmogorov-Smirnov test revealed the normality of the distribution of the variables (P > 0.05).

It is clear, based on Table 2, that the three factors had an eigenvalue of above 0.5. These 3 factors explained approximately 58% of the total variance of the questionnaire (32.64, 13.82, and 11.26% for the first, second, and third factors, respectively) (Table 2). The scree plot showed the distinction between these three factors compared with the rest.

It was evident that, except for the third factor, almost all the other factors were placed on a slope.

The scree plots were used to determine the number of factors. For this purpose, given the diagram slope, the factors identified in the diagram steep slope were considered the main factors, and the factors parallel to the slope line axis were avoided. The scree plot contributed to the identification of the three factors as the components of the AWQV2 questionnaire. Accordingly, the scree plot below illustrates the distinction between the three factors relative to the rest and followed by the third factor; the remaining factors are almost on the same slope (Figure 1). 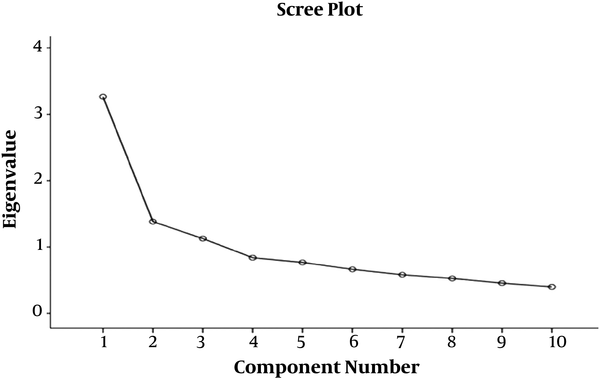 Scree plot shows the three factors of the AWQV2 questionnaire 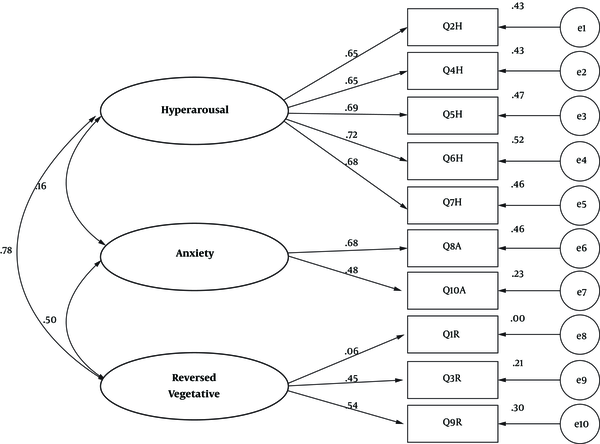 Based on the commonly used criteria, a model with a goodness-of-fit index of above 0.9 is an acceptable model. Nevertheless, it determined a cut-off point of 0.95 for goodness-of-fit indices. Root mean square error of approximation of below 0.05, 0.05 to 0.08, 0.08 to 0.1, and above 0.1 shows a good, acceptable, average, and weak fit of the model, respectively (Table 4). Based on the values presented in the table, it is clear that the indices showed a good fit of the model. Therefore, the 3-factor model was confirmed with the confirmatory factor analysis (25).

The present study was conducted to determine the validity and reliability of the Persian version of the Amphetamine Withdrawal Questionnaire (AWQv2) in amphetamine users. The study population consisted of 388 people (215 women and 173 men) aged 36.94 ± 10.25 years (range: 16 - 74 years). The reliability of the AWQV2 was confirmed with a Cronbach’s alpha of 0.72 for the entire scale and 0.6 to 0.72 for its subscales, indicating the good internal consistency of the scale. The test-retest coefficients (0.77) further confirmed the stability of the entire scale and its subscales. These results are in agreement with those reported by Srisurapanont et al. (17) and McGregor et al. (18), who reported good reliability for the questionnaire and good factor analysis of the three subscales, i.e. reversed vegetative, anxiety, and hyperarousal. The factor structure and construct validity of the Persian version of the AWQV2 were assessed in this study using both confirmatory and exploratory factor analyses. Further, factor analysis revealed three factors for Farsi AWQV2, including reversed vegetation, anxiety, and arousal.

Moreover, Pearson’s correlation coefficients between the AWQV2 and AWARE showed an acceptable convergent validity. Proper treatment for drug users mandates a patient assessment and monitoring tool for those who are involved in the treatment of addiction.

Overall, with its appropriate reliability and validity coefficients and easy implementation in different situations and groups, the AWQV2 can be used by researchers in various research and clinical fields in methamphetamine rehabilitation centers. Compared to previous studies (17, 18), new statistical methods were used in the present study, including confirmatory factor analysis and convergent validity assessment in LISREL version 8.5. Compared to the present study, previous studies on methamphetamine have studied much smaller sample sizes. Also, very few studies have been conducted on female samples, and studying women becomes more crucial due to the various impacts of this gender on different aspects of life, especially the family, childrearing, and the society as a whole (27).

The major limitation of this study was the lack of access to a larger sample of methamphetamine abusers.

Future studies are recommended to assess the psychometric properties of the Persian version of the AWQV2 using other methods such as structured interviews and behavior observations.

Using the ten-question questionnaire of AWQV2, we may adequately measure the characteristics of the withdrawal symptoms of methamphetamine withdrawal in its dependents. Based on the results, the AWQV2 has very good psychometric properties and may be used in research and therapeutic interventions. Therefore, the tool may be used for research purposes and planning for diagnosis, treatment, and reduction of injury.

The authors would like to thank the Substance Abuse Prevention Research Center and Clinical Research Development Unit (CRDU) of Emam Khomeini, Mohammad Kermanshahi, and Farabi Hospital, University of Medical Sciences, Kermanshah, Iran, for their support, cooperation, and assistance throughout the study (grant number: 96413).